Satellite-derived bathymetry (SDB), a technique with origins dating back at least 50 years ago, is now a widely and commercially deployable process relied upon to accurately and dependably measure water depths in relatively shallow coastal areas. SDB products are routinely used by port operators, energy providers, construction engineering firms, and environmental consultancies to keep their near-shore activities safe for people, vessels, and fragile ecosystems. 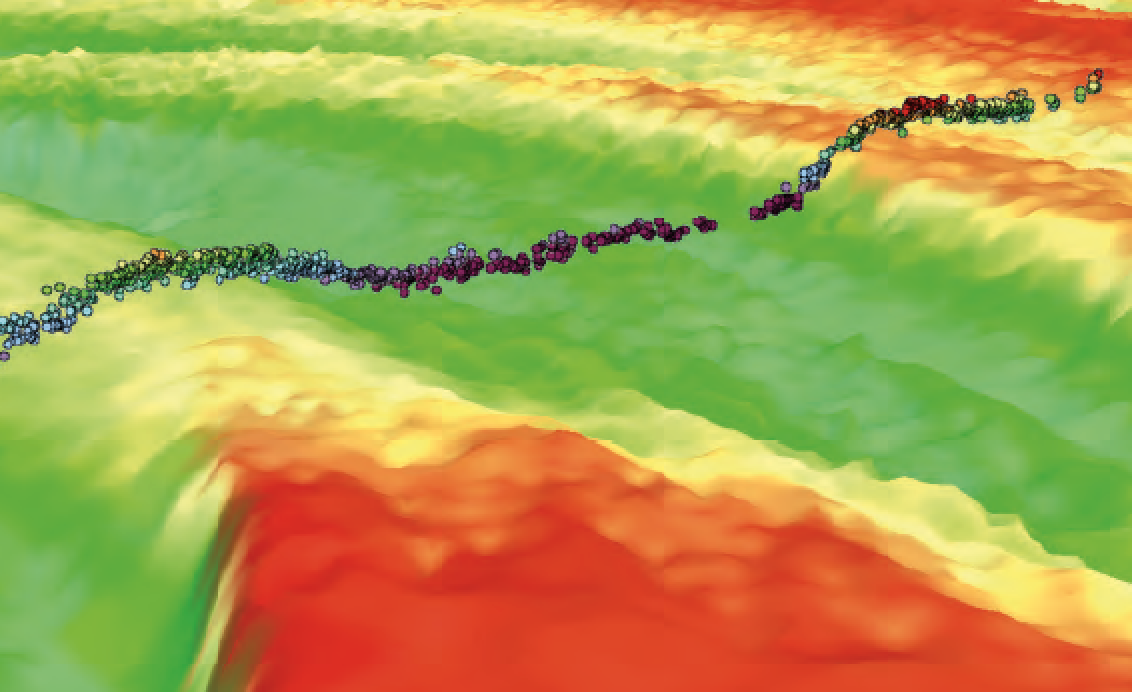 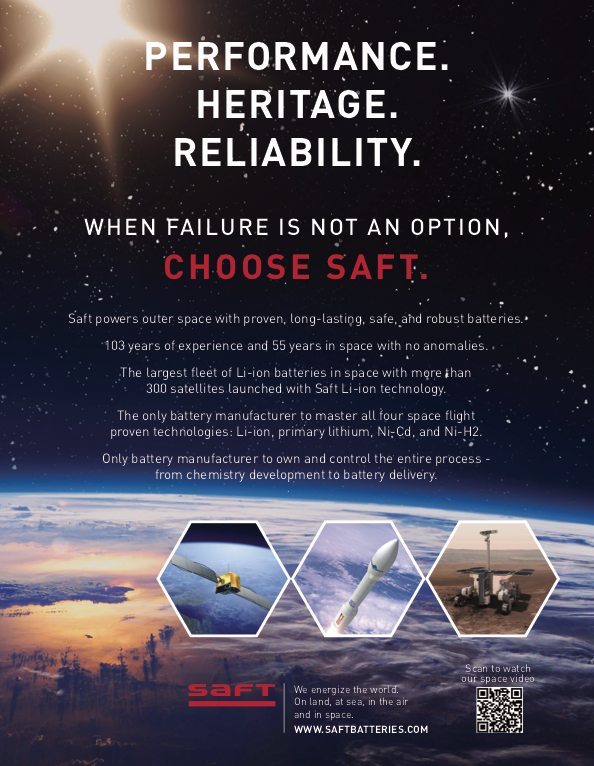 Although SDB techniques usually incorporate all spectral bands, the most important is the visible Blue wavelength. Sunlight in this spectrum penetrates the water column the deepest and reflects off the seabed in optically shallow coastal zones, returning a reflectance value to the sensor, which can be used to calculate depth.

The 30 meter spatial resolution and infrequent revisit times of the early Landsat imagery, however, was insufficient at that time for extensive commercial applications of SDB technologies. The overall quality of SDB measurements — quantified by their depth limit and accuracy — is a direct function of the spatial resolution of the source imagery. In other words, higher resolution imagery yields higher-quality SDB.

Despite the spatial resolution issue, SDB research continued because satellites offered many advantages over traditional bathymetric mapping methods, such as ship-borne sonar. Satellites pose no risks to vessel or the environment in the dynamic coastal zone and they can capture enormous amounts of image data in short periods of time.

Even when airborne LiDAR entered the picture in the 1990s, satellites still had the potential edge for collecting data quickly and capturing it in places aircraft are not allowed.

Coarse spatial resolution of satellite imagery and relatively little imagery archives held SDB back from commercial and technical viability until the early 2000s with the launch of several, high-resolution, multispectral satellites. Positionally accurate and radiometrically precise imagery at 2 meter resolution or better enhanced the capabilities and applications of SDB.

TCarta Marine based in Denver was the first U.S.-based business in SDB, relying heavily on commercial imagery from these high-resolution sources. As spatial resolution increased with new satellite launches in the following years, so did the quality — and value — of SDB.

In extremely clear water, such as the Maldives, measurements down to 30 meters are reliably produced at 2 meter resolution or higher. The accuracy of these data sets is typically 10 to 20 percent of water depth. 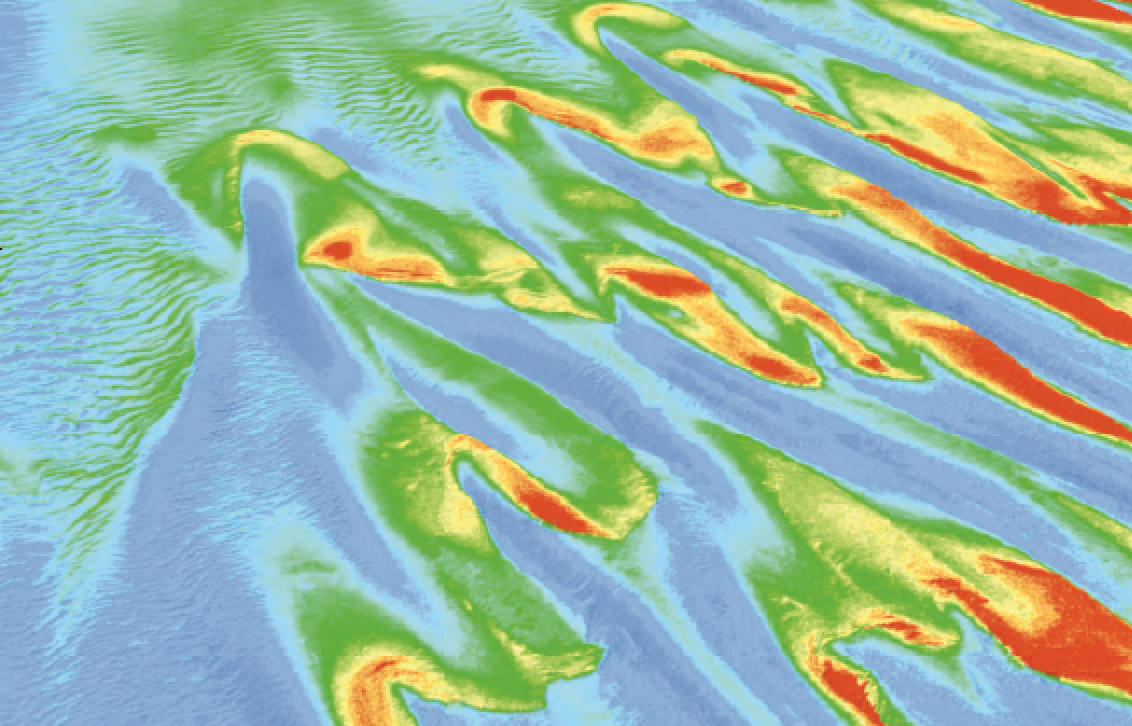 Most importantly, these SDB products can now be produced at about one tenth the cost of similar, near-shore, bathymetry data sets from marine or airborne sources. Commercial successes at last, SDB products have been purchased extensively for use in coastal marine applications related to oil & gas exploration and production, coastal infrastructure engineering, environmental monitoring, and geospatial intelligence (GEOINT) activities.

SDB’s evolution did not end there, however. Sentinel 2 A and B, a paired system of Earth Observation (EO) satellites operated by ESA and launched in 2015, allowed for new techniques to improve and extend SDB technologies. Despite its relatively coarse, 10-meter resolution, two elements made Sentinel imagery intriguing for SDB.

First, the data is freely available, and second, the satellites capture image data continuously and with a regular pattern, quickly amassing vast archives of multiple images for nearly every spot on the Earth and that provides a treasure trove of imagery, all deployable toward new, multi-image composite, SDB methods.

Commercial satellites typically capture images only when paying customers request them, putting a disproportionately high number of data sets in their archives for areas with large human populations and important natural resources.

Remote coastal areas may be imaged far less often, resulting in fewer archived images, if any. Sentinel’s global imagery collection was of critical importance to TCarta as it experimented with new concepts to scale up SDB techniques and envision a Global Satellite Derived Bathymetry product in 2017.

Progression of AI-driven bathymetry extraction from ICESat-2 ATL03 data collected on October 2018, ground track 0362, over the Lucayan Archipelago.
Click on image to enlarge.

With the 10 meter spatial resolution of Sentinel data and the frequent revisit cycle, TCarta saw this program as an opportunity to test the application of Machine Learning (ML) to improve SDB predictions and expand its application beyond clear waters into more turbid coastal zones, especially in Arctic regions.

In 2018, the National Science Foundation (NSF) saw the business potential in the concept and awarded TCarta a Small Business Innovation Research grant to automate and develop novel techniques for SDB in order to develop the commercial potential.

The research exponentially extended the traditional SDB storyline — with the help of cloud computing. Rather than apply one SDB algorithm to one image at a time, they applied three separate processes to every suitable image and pixel for a given coastal area, yielding multitudes of water depth calculations. The system then composited the results to generate a final SDB product more accurate and more complete than previously possible.

SDB took a significant leap forward in the midst of this research with the 2018 launch of NASA’s ICESat-2. Although not designed for bathymetric surveying, this satellite carries a LiDAR sensor that has proved extremely adept at directly measuring shallow water depth down to 30 meters with centimeter accuracy in some areas.

This data set has been incorporated into the NSF- and a NOAA-funded research grant as an SDB algorithm training and validation tool. Now there is an active sensor in space for coastal mapping.

The overall result of integrating ML, cloud computing, Sentinel image stacks, and ICESat-2 data into the SDB workflow is that water depth measurements are being calculated in murky and challenging waters that were once thought impossible to clarify.’ Just as importantly, these new techniques are generating more accurate and deeper measurements in areas where SDB was already successful. Adaptation of these techniques to new and existing sources of ~1 meter multispectral imagery with high collection rates to create image stacks is underway.

The maturation of SDB technology is likely to accelerate in coming years thanks, in part, to the 2021 kick-off of the United Nation’s Decade of Ocean Science for Sustainable Development and to the Seabed 2030 initiative, the roadmap for which specifically calls on SDB as a cost-effective option for surveying coastal and remote areas. With the marine environment being recognized as a vital natural resource that must be better understood and protected as it is developed for energy, aquaculture and commerce, bathymetric information will play multiple pivotal roles in ongoing global ocean programs.

Improvements in SDB will also be driven by the development of more technologically advanced EO smallsats, such as the recently launched Airbus Pléiades Neo, Satellogic Aleph-1 platforms and the coming Maxar WorldView Legion constellation.

Better spatial resolution and more frequent revisit cycles are certain to be important factors improving SDB, but hyperspectral imaging and additional space-based LiDAR systems designed for deeper water penetration will soon be available. Together, these technological advancements will be playing predominant roles in the ongoing evolution of Satellite Derived Bathymetry in the 21st Century.
www.tcarta.com 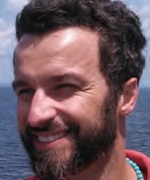 Author Kyle Goodrich is the president and founder of TCarta Marine and has a 19 year career in geospatial services. Since founding TCarta in 2008, Kyle has led numerous geospatial product research and development plans, including the development and commercialization of satellite derived bathymetry, stereo photogrammetric bathymetry, a global aggregation and assimilation of multi-source bathymetry data and global vector shoreline. As Principal Investigator in TCarta’s National Science Foundation Small Business Innovation Research Phase 2 Project Trident, Mr. Goodrich is leading the commercialization of the technology arising from the grant research.