A solar eclipse with autora. Image is courtesy of NASA.

For decades their diminutive size has been their weakness. However recent advancements in power and propulsion technologies allied with increasing capability in miniaturized payloads and avionics could turn a smallsat weakness into a superpower and unlock a new era of agile satellite operations... the timing of this technological confluence couldn’t be more critical.

The number one factor limiting the lifetimes and mission ranges of most satellites is exhaustion of chemical propellants — running out of gas. 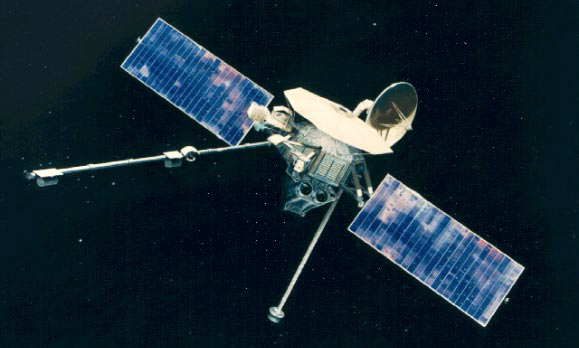 GEO birds burn fuel to persistently dance the dance of orbital station keeping that keeps them perfectly on a post dictated by the International Telecommunications Union.

Deep space satellites can go only as far as their limited number of trajectory-changing thrust maneuvers can take them.

While there are numerous, non-chemical propulsion systems that provide at least an order of magnitude higher specific impulse (Isp) or fuel efficiency when compared to chemical engines, they all produce low thrust and have seen only marginal use in the era of large satellites. However, that situation is changing — the industry is learning how to do more with less satellite mass. 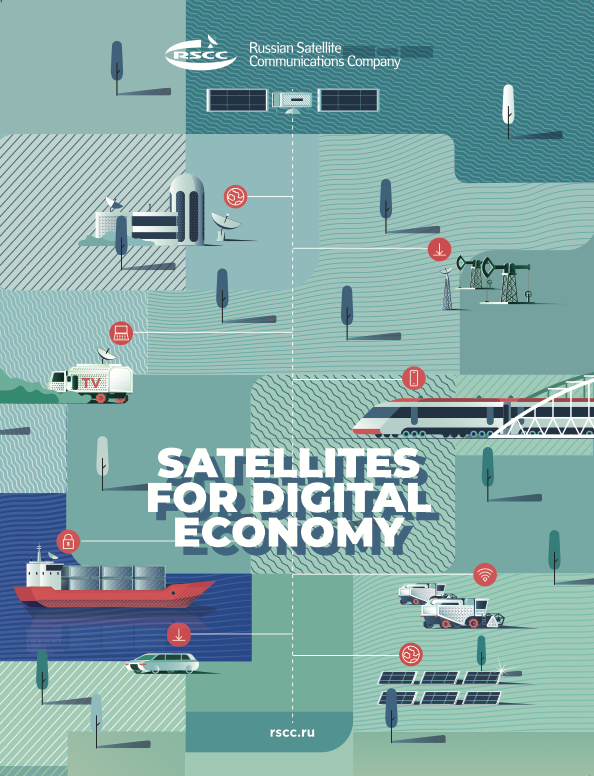 At the top of high-Isp propulsion technologies are extremely large, deployable, solar sails that convert sunlight’s photonic pressure into an inexhaustible propulsion force.

The concept was first practically demonstrated in 1974, following the Mariner 10 spacecraft that exhausted the attitude control fuel — NASA’s mission controllers pointed the spacecraft’s solar arrays to create a differential solar pressure that correctly pointed the Mariner 10 while completing its survey of Mercury.

During the past decade, several technology-demonstration missions have proven that large solar sails can effectively propel a satellite on long-duration missions. Starting with Japan’s IKAROS mission in 2010, and including the more-recent LightSail-2 and NanoSail-D missions, solar sail engineering has become feasible.

NASA’s NEA Scout Mission and the proposed Solar Cruiser Mission will be the first operational missions to use this innovative propulsion capability. Solar Cruiser’s scientists want to take advantage of it by having the satellite fly ahead of the Sun-Earth line and out of the ecliptic plane, thereby enabling novel observations of coronal magnetism and providing heretofore unavailable and vital clues as to the origins of solar wind, coronal heating, and space weather eruptions.

A team led by NASA Marshall Spaceflight Center, including partners Roccor, Ball Aerospace, and NeXolve, are currently working on the Solar Cruiser “Sailcraft” that will deploy a 1,600 m2 sail from a small bus.

Solar Cruiser builds on flight heritage from the recent 10 m2 NanoSail-D sail (photo, below left) and the upcoming 86 m2 NEA Scout sail (photo, bottom right) that will be launched on the Artemis 1 mission that’s scheduled to occur for late next year. 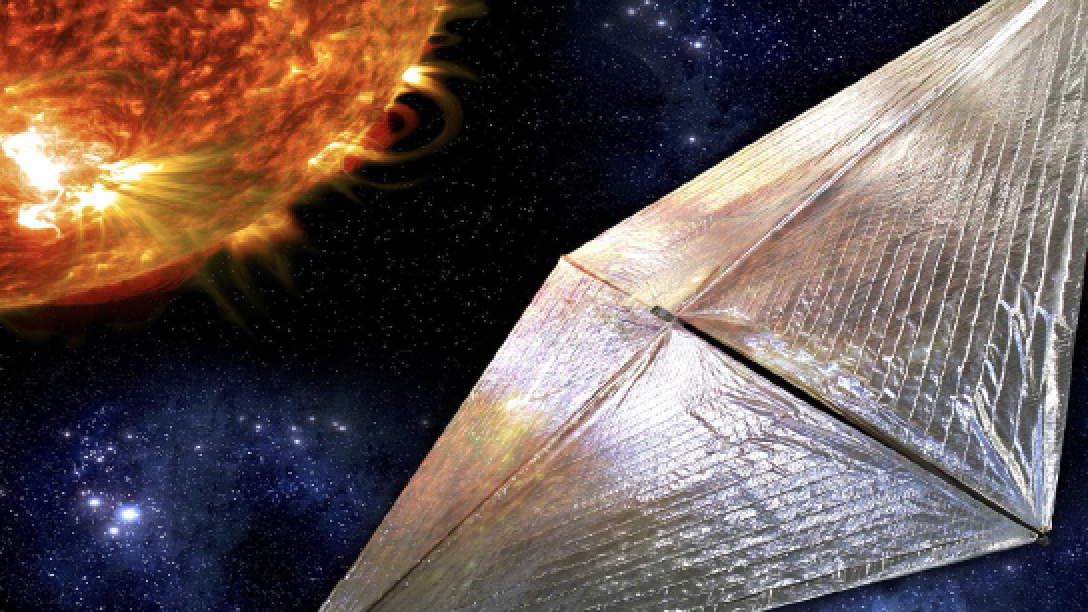 When coupled with the new generation of dramatically lighter-weight satellite systems, solar sailing is poised to become a practical alternative to chemical propulsion for celestial missions that want to fly free from the gravitational “shackles” Johannes Kepler dictated 400 years ago.

Two decades ago, NASA’s Deep Space 1 mission was the first to prove the principle of solar electric propulsion (SEP) using a solar-array-powered ion thruster to propel the spacecraft on an asteroid-encountering non-Keplerian trajectory. 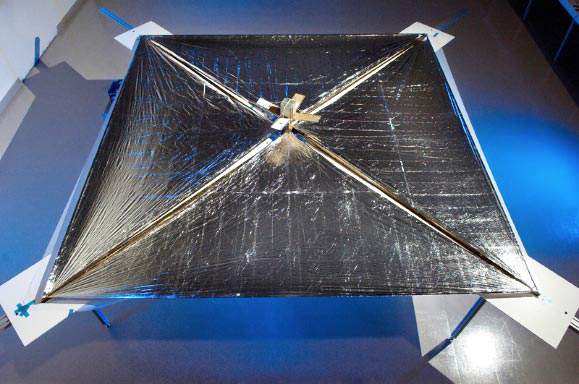 NASA’s NanoSail-D in expanded form.
Photo is courtesy of the agency. 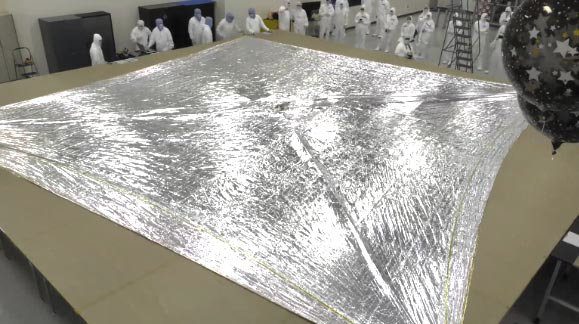 NEA Scout is a CubeSat designed to study asteroids close to Earth and will launch on an Artemis I mission. This time-lapse video shows a deployment test of NEA Scout's solar sails conducted on June 28, 2019. The test was performed in an indoor clean room at the NeXolve facility in Huntsville, Alabama. Image is courtesy of NASA.

In 2015, Eutelsat 115 West B was one of the first commercial satellites to use solar electric propulsion exclusively for station-keeping and orbital maneuvering. Post Falcon 9 rocket and approximately eight months of meticulously timed, orbit-raising maneuvers to its assigned GEO post, the 2,205 kg satellite entered service in early 2016. 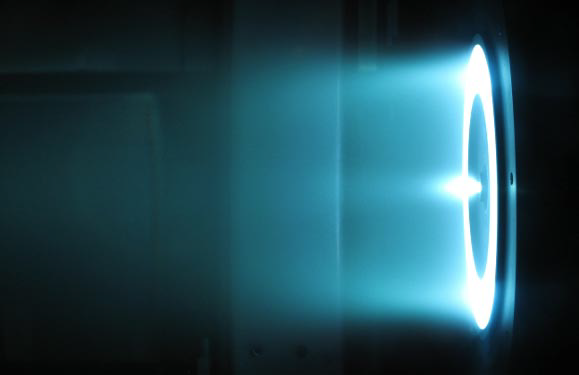 The satellite’s suite of ion thrusters are powered by two, large, solar arrays that span 33 meters and generate an estimated 5 kW of power to charge a massive bank of lithium-ion batteries.

Why do we care that we can fly satellites with essentially limitless maneuverability?

Our world is becoming wholly dependent on the ever-increasing flow of data to and from satellites in the extremely crowded space between LEO and GEO orbits. As the risk of accidental collisions between these satellites increases, so does the risk of intentional interruption of satellite services by “bad players” in the international community. Indeed, our lifestyle, our livelihood and our national security are beginning to hinge on our awareness of — and our ability to protect against — any nefarious operations in cislunar space.

Indeed, the newly formed U.S. Space Force (USSF) is charged with this mission, while its progenitor, the U.S. Air Force, is working hard to accelerate technology readiness for a new era of agile, military satellite operations.

Manufactured by Boeing Defense and Space, EUTELSAT 115 West B is the first all-electric satellite of EUTELSAT’s fleet. Artistic rendition is courtesy of Boeing.

In parallel with our work on NASA’s Solar Cruiser Mission, Roccor is currently working with an unnamed government customer to develop a 2 kW deployable solar array to power a next-generation SEP system on a 100 kg-class smallsat. This project is an operational demonstration of an agile smallsat platform with roughly 10 times per mass the electric propulsion capability of Eutelsat 115 West B.

If these near-term solar sailing and electric propulsion missions succeed as planned, we will then see the emergence of the true superpower of smallsats. Ever-increasing smallsat payloads combined with solar sailing and electric propulsion capabilities will produce orbiting sentinels that possess nearly limitless performance, agility and mission lifetimes.
www.roccor.com

Dana Turse is director of R&D programs for Roccor. She is an inventive mechanical engineer who specializes in advanced composites and mechanisms. Her credits are many, including recently being named chair of the High Strain Composites Technical Subcommittee of the American Institute of Aeronautics and Astronautics (AIAA)... the first woman to ever hold the position. She is the co-inventor of several, deployable booms and antenna technologies and has worked on a number of patents, including a self-deploying solar array, a slit tube locking longeron, a furlable shape-memory spacecraft reflector with offset feed, several deployable structures with collapsible structural members, and a deformable sandwich panel.

Prior to joining Roccor in 2016, Turse served as manager of deployable space structures and senior mechanical engineer at Composite Technology Development in Lafayette, Colorado. Turse received her degree in mechanical engineering from Colorado State University.