The next-generation series of Tracking and Data Relay Satellites (TDRS) provides NASA with crucial crosslink communications capability between Earth-orbiting spacecraft and control and data processing facilities on the ground. 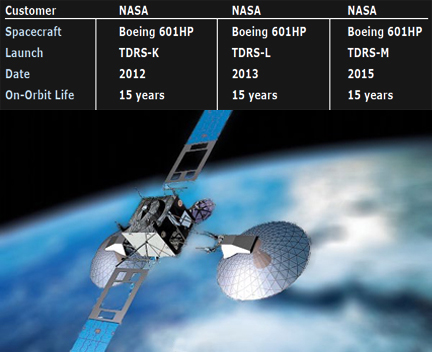 NASA has returned to Boeing to build its next-generation series of Tracking and Data Relay Satellites (TDRS). Boeing was originally awarded a contract to build NASA’s TDRS-K series in December of 2007. Previously, Boeing built the three satellites in the TDRS-H, I and J series for NASA Goddard Space Flight Center in Greenbelt, Maryland. Launched between 2000 and 2002, these satellites continue to provide excellent service. The newest TDRS award for Boeing continues its role supporting NASA’s key programs over a period that spans more than four decades.

Boeing has teamed with General Dynamics, which will update and modify the existing TDRS system ground terminals. The ground terminals, known as the White Sands Complex, provide the primary two-way communications link between the TDRS satellites and the user control centers and data processing facilities. 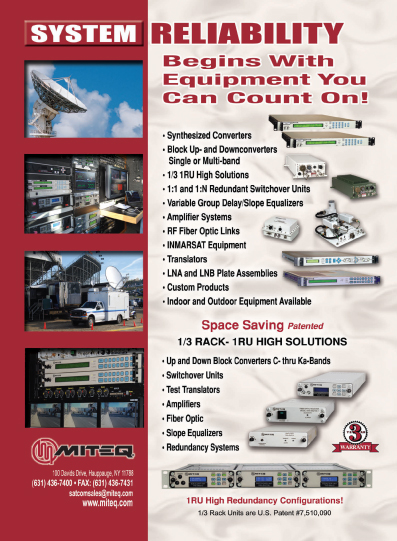 Boeing will integrate its patented and innovative spring-back antenna design, first used and proven on the TDRS-H, I and J satellite series, into the new TDRS spacecraft. The 15-foot diameter antennae are designed with flexible membrane reflectors that fold up for launch, then spring back into their original cupped circular shape on orbit. The steerable, single-access antennas can simultaneously transmit and receive at S-band and either Ku- or Ka-band, supporting dual independent two-way communication. 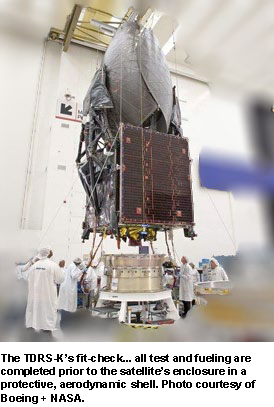 The United Launch Alliance (ULA)-manufactured rocket will push the TDRS-K into space to reinforce NASA’s communications network. Liftoff is targeted for January 29th during a 40-minute launch window opening at 8:52 p.m. EST (0152 GMT) from the Cape’s Complex 41.

Putting the two-stage rocket together got underway when ULA workers brought the bronze-colored first stage to the Vertical Integration Facility for stacking operations. The booster was secured aboard its mobile launcher, anchored on small supports that protrude from the platform. At liftoff, explosive bolts free the rocket and those supports will retract into the platform walls as the vehicle powers its way off the pad on 860,000 pounds of thrust.

Known as the Common Core Booster, the stage was pulled by a semi-truck up the road from the Atlas Spaceflight Operations Center high bay to the 30-story VIF building, where workers attached lifting cranes. The 106.6-foot-long stage was rotated vertically, then maneuvered into the building and stood upright on the mobile platform. The stage is equipped with a dual-nozzle RD-180 main engine that will burn kerosene fuel and supercold liquid oxygen during the initial minutes of flight.

The interstage adapter installation is next, securing the 12.5-foot diameter first stage to the 10-foot-wide Centaur upper stage. When the cryogenic upper stage is hoisted atop the interstage, the basic buildup of the Atlas 5 is completed. 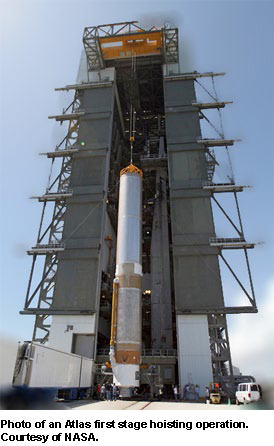 Centaur’s single RL10 engine, fueled by liquid hydrogen and liquid oxygen, will perform the necessary burns to achieve orbital velocity and then shape the orbit for deployment of TDRS-K. The stage is 41.5 feet in length and also houses the navigation unit that serves as the rocket’s guidance brain.

The rocket is known as the 401 configuration of the multi-varient Atlas 5 family, which is tailored with strap-on solid boosters and different sized nose cones to match the cargo’s mass and size.

The spacecraft arrived from the Boeing factory on December 18th and has since undergone preflight electrical testing at the Astrotech processing facility in Titusville, Florida.

The satellite was encapsulated into the rocket’s nose cone on January 15th in preparation for delivery to the VIF and mounting atop the Centaur was completed on January 17th, which completed the assembly of the 19-story-tall launcher.

ULA and its customers have opted to delete the countdown dress rehearsals for 401 vehicles at the Cape, condensing the prelaunch timelines for such rockets, except for planetary missions.

Rollout to the launch complex occurs the day before liftoff, as the 1.4-million pound platform rides the rail tracks 1,800 feet from the VIF to the pad. 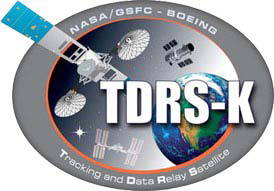 The seven-hour countdown begins at 1:52 p.m. EST on launch day, leading to cryogenic liquid oxygen and liquid hydrogen fueling operations starting at 6:59 p.m. for a planned blastoff at 8:52 p.m. EST, as the launch window opens for the first Atlas launch of the year and the 35th overall since 2002.

For TDRS-K, the plain two-stage launcher with no solids will provide ample performance to carry the Boeing-built satellite to orbit.

25 Years Of TDRS History
Twenty-five years ago, NASA inaugurated a new era in spacecraft communications with the launch of the first TDRS. This space-based system ultimately replaced an extensive network of ground tracking stations deployed for the Apollo missions and significantly increased the time available to mission operators to contact their flight vehicles. 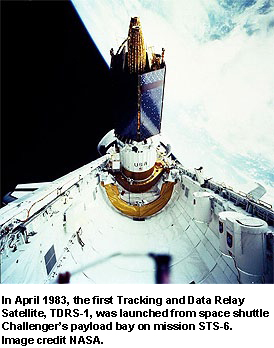 Perched 22,300 miles above the Equator, the satellite rotated Earth at the same speed and direction that the Earth turns. Relative to a point on Earth, TDRS appeared to remain stationary. From that geosynchronous orbit, it beamed communications from Earth to other orbiting spacecraft and back, establishing itself as a reliable resource for NASA’s space shuttle and other customers.

“When many people look at the TV and see beautiful pictures coming from the shuttle or International Space Station, they take communications for granted,” said Badri Younes, NASA deputy associate administrator for Space Communications and Navigation. “They don’t know the capabilities that NASA leverages in getting this data down to the ground.” 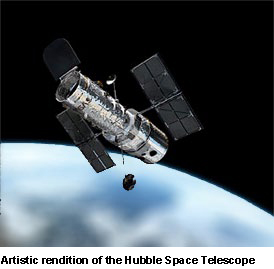 Over the last 25 years, the TDRSS network has brought stunning images from the Hubble Space Telescope to Earth. It has delivered pictures, television, voice and data from more than 100 space shuttle missions and the International Space Station. The TDRSS network has delivered large volumes of Earth observation data in support of Mission to Planet Earth and investigations into global climate change.

The TDRS system has evolved over the last 25 years to meet expanding user requirements and provide new services. Meanwhile, the very first TDRS satellite that was deployed by space shuttle Challenger in April 1983 is still on duty today, returning data from the National Science Foundation activities at the Amundsen-Scott South Pole Station in Antarctica. 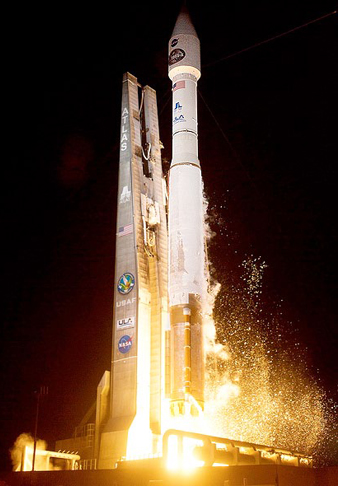 At the culmination of all of the trials and tribulations and the hard work involved in building a satellite and preparing the launch vehicle, that day finally arrives when all comes to successful fruition. Janury 30th was that date, and TDRS-K successfully launched from Cape Canaveral.

“ULA and our mission partners are honored to work with the outstanding NASA team and we are proud of the vitally important data relay capabilities that were safely delivered today,” said Jim Sponnick, ULA vice president, Mission Operations.

This mission was launched aboard an Atlas V 401 configuration vehicle, which includes a 4-meter diameter payload fairing. The Atlas booster for this mission was powered by the RD AMROSS RD-180 engine and the Centaur upper stage was powered by a single Pratt & Whitney Rocketdyne (PWR) RL10A-4 engine.

NASA established the TDRS project in 1973 to provide around-the-clock and around-the-Earth communications for the network that routes voice calls, telemetry streams and television signals from the International Space Station, as well as science information from the Hubble Space Telescope and other orbiting spacecraft.

“With this team’s innovative and ever-present focus on delivering mission success and best value through Perfect Product Delivery, final work at the Cape to prepare the Atlas V rocket that launched today was completed in record time—27 days from when the vehicle was first erected to launch,” said Sponnick. “The ability for ULA to reduce its processing time both during manufacturing and at the launch sites, offers our customers added manifest flexibility as well as additional launch opportunities to ensure their payloads are delivered reliably and on-time.” ULA’s next launch is the Atlas V LDCM mission for NASA scheduled for Feb. 11, 2013 from Space Launch Complex-3 at Vandenberg Air Force Base, California. 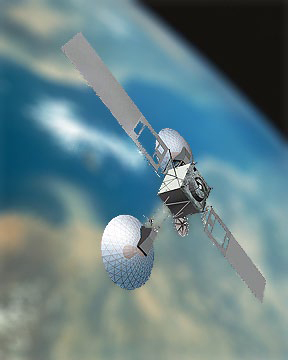 “TDRS-K bolsters our network of satellites that provides essential communications to support space exploration,” said Badri Younes, deputy associate administrator for Space Communications and Navigation at NASA Headquarters in Washington. “It will improve the overall health and longevity of our system.”

“With this launch, NASA has begun the replenishment of our aging space network,” said Jeffrey Gramling, TDRS project manager. “This addition to our current fleet of seven will provide even greater capabilities to a network that has become key to enabling many of NASA’s scientific discoveries.”

The TDRS-K spacecraft includes several modifications from older satellites in the TDRS system, including redesigned telecommunications payload electronics and a high-performance solar panel designed for more spacecraft power to meet growing S-band requirements. Another significant design change, the return to ground-based processing of data, will allow the system to service more customers with evolving communication requirements.

The next TDRS spacecraft, TDRS-L, is scheduled for launch in 2014. TDRS-M’s manufacturing process will be completed in 2015.

NASA’s Space Communications and Navigation Program, part of the Human Exploration and Operations Mission Directorate at the agency’s Headquarters in Washington, is responsible for the space network. The TDRS Project Office at NASA’s Goddard Space Flight Center in Greenbelt, Maryland, manages the TDRS development program. Launch services were provided by United Launch Alliance. NASA’s Launch Services Program at the Kennedy Space Center was responsible for acquisition of launch services.