Commencing with its first satellite, DFH-1, which was placed in orbit on April 24, 1970, China has placed 222 satellites into orbit for a variety of purposes as shown in the following table. 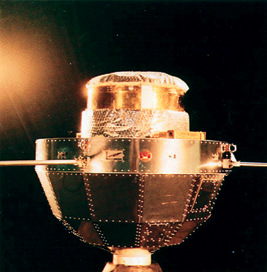 All these satellites, save for two which were secondary payloads on Russian launch vehicles, were launched with Chinese rockets and from one of the three Chinese launch sites: Jiuquan, Xichang and Taiyuan. In addition China placed 28 satellites into orbit for other countries, of which eight were for Hong Kong, a British colony that became a special region of China on July 1, 1997.

The above classification by objectives is rough, as for many of the Chinese satellites the stated objectives are so broadly worded that their true nature is not clear. This approach is reminiscent of the early days of the USSR space program. There is, for instance, a suspicion that many of the Shi Jian (SJ) scientific satellites are nothing more than technology satellites that are tests for military purposes.

The same thought applies to the series of Fanhui Shi Weixing (FSW) recoverable satellites and the series of Yaogan Weixing (YW) Earth observation satellites, both of which include satellites that have the alternative name of Jian Bing, a series that is usually considered as having military objectives. 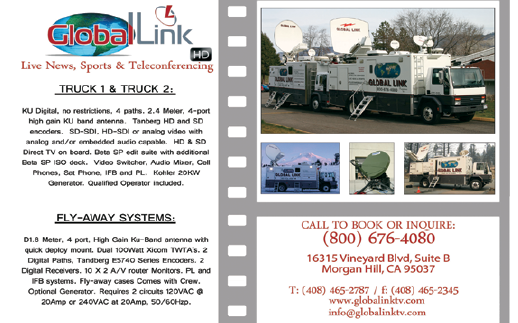 The first satellite in the STTW series, which was placed in geostationary orbit at 125 degrees East and carried two transponders operating in the 6/4 GHz band, was itself preceded by the Shiyuan Weixing (SW) or experimental satellite, that was launched on January 29, 1984. While the latter satellite did not achieve a geostationary orbit, it is not clear whether this was by design or due to a system failure.

The next satellites in the Shiyong Tongbu Tongxin Weixing (STTW) series were fitted with 8 to 10 transponders that operated in the 6/4 GHz bands and, commencing with STTW-3, the spin stabilized satellites were also referred to as Dong Fang Hong (DFH) 2.

The next generation was designated as DFH 3 and carried 24 transponders operating in the 6/4 GHz band. The three-axis stabilized satellites were built by China Aerospace and only two were built.

With the Dong Fang Hong (DFH) 4 series, China obtained a suitable space platform that was used for a wide range of communications, as well as some other, satellites. Built by the China Academy of Space Technology (CAST) with assistance from the European aerospace company Alcatel Alenia, this satellite development started in 2000, while the first launch occurred on October 29, 2006, as Xinnuo-2.

The platform had a mass of 5100 to 5400 kg. and consisted of a payload and a service section. The satellite accommodated as much as 800 kg. of instruments and 3100 kg. fuel and was fitted with two solar wings.

Summary of Chinese launches (as at April 1, 2015) (*objective based on author’s assessment) (**Excludes Hong Kong satellites)

In the fields of crewed spaceflight and interplanetary missions, China seems to, once again, be going through an identical learning process as with their communication satellites. Fortunately, as these programs have a high propaganda value, there is more information available regarding these programs.

In the Shenzhou crewed spaceflight program, four automated flights from 1999 to 2002 occurred prior to the first crewed flight, Shenzhou-5, which took place on October15, 2003. The Shenzhou program development progressed far faster than the crewed programs of the USSR/Russia that advanced through the Vostok, Voskhok and various Soyuz steps, or the USA’s Mercury, Gemini and Apollo pathways. Clearly, China has applied the experiences of those programs to its own development efforts and that is quite evident in the broad similarities between the Shenzhou and Soyuz spacecraft.

In fact, China fast tracked to a space station concept by docking Shenzhou-8 with the Tiangong-1 docking module, itself apparently a precursor to a space station. Simultaneously, China openly admits that they intend to send a crewed mission to the Moon during the 2020s. 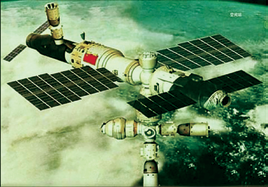 Future Chinese Space Station
In the field of interplanetary missions, China has embarked on the Chang’e program—this witnessed the 3800 kg. Chang’e-3 lunar spacecraft release a Lunar Landing Vehicle that descended to the lunar surface on December14, 2013, followed by the deployment of the Yutu vehicle.

Following initial tests, the vehicle captured photos of its surrounding and conducted a few scientific measurements before closed down for the lunar night on December 23, 2013.

On January 11, 2014, the lander as well as Yutu were re-activated until, on January 25, 2014, Yutu suffered a communications failure. Communications were not re-established until February 13, 2014, but the rover vehicle continued to encounter electrical problems that prevented it from moving its solar panels into an insulating position during the lunar night as well as from traveling around on the Moon’s surface. In spite of these problems, Yutu’s instruments managed to operate, although at ever-reducing capacity. In October of 2014, the rover became immobile and the instruments continue to degrade, but the rover was still capable of communication with ground controllers. In December of 2014, all contact was lost.

As far as other celestial bodies are concerned, China’s Yinghuo-1 hitched a ride on Russia’s Phobos-Grunt Mars mission that was launched on November 8, 2011. The vehicle was intended to separate from the main spacecraft to orbit Mars, but Phobos-Grunt failed to move into the trans-Martian trajectory and, instead, burned up in the Earth’s atmosphere. 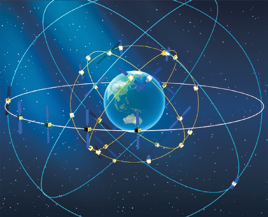 Artistic rendition of the Beidou constellation.

To date, the five geostationary satellites and 11 of the additional satellites have been launched. The system has been providing services in the Asia-Pacific (APAC) region but it appears that the remaining MEO satellites may never be launched due to the introduction of the third phase of CNSS.

The first satellite in this third phase of the system was launched on March 30, 2015. This phase, also referred to as Compass I, will use three slightly different applications of the DFH 3B space platforms:

The satellites will carry a phased array antenna for navigation signals, a laser retroreflector and two deployable dish antennas.

Beidou Third Phase Constellation
In the field of Earth Observation (EO) satellites, two operational systems are in use as well as the Feng Yun meteorological satellites.

The first satellite in the Zi Yuan system was launched on October 14, 1999. Also known as the Chinese/Brazilian Earth Resources Satellite (CBERS)-1 as Brazil has a 30 percent share in the program, this was a 1400 kg. satellite equipped with a high resolution CCD camera, an IR multispectral scanner, a wide field imager, a data collection system and a space environmental monitor. This was followed by another two CBERS satellites.

However, not all satellites in the Zi Yuan system are shared with Brazil and the belief is that some of the satellites are for military use under the alternative satellite name Jian Bing.

CBERS-3
The Yaogan Weixing EO satellites series commenced on April 26, 2006. The satellites had been developed by the Shanghai Academy of Spaceflight Technology and were fitted with a variety of equipment. The official stated objectives included land and agricultural surveys, disaster monitoring as well as associated scientific experiments. However, once again, the belief is that there were also military applications designed into the satellite.

China has developed its own range of launch vehicles. These vehicles started in October of 1956 when it acquired two obsolete R-1 missiles from the USSR, followed by two R-2 missiles the following year. China subsequently commenced the development of military missiles that culminated in the Dong Feng (DF) series of missiles, some of which formed the basis for the space launch vehicles.

The space launch vehicle development was undertaken by the Chinese Academy of Launcher Technology (CALT) or Zhongguo Yunzai Huojian Jizhu Yanjiuyuan in Chinese, although components were made by a range of other industries. In particular, the Shanghai Academy of Space Technology (SAST) played a significant role as a sub-contractor. The CALT organization consists of 13 research institutes, six or seven factories and some additional management departments.

The Chang Zheng (CZ) 1 or Long March 1 launch vehicle used by China was developed from the Dong Feng (DF) 4 missile. The first launch took place on November 1, 1969, and several versions were developed.

The CZ 2 launch vehicle, as well as its derivatives, was based on the CSS-4 missile and was a two-stage vehicle. The first successful orbital launch was on November 26, 1975.

The CZ 3 was a further derivative of the CZ 2 and flew for the first time on January 29, 1984. Again, there were a number of derivative launch vehicles, as well.

The CZ 4 launch vehicle, based on the CZ 3A, had a third stage and is being built in various versions. With the first orbital launch on September 6, 1988, this is the most used launch vehicle in the Chinese rocket stable.

CZ 5
China is currently developing its next generation of launch vehicles that will be known as CZ 5. This launch vehicle will be in the same class as the European Ariane 5 and the U.S. Atlas 5, having a capability to place 25,000 kg. of payloads into orbit.

China is also proposing a CZ 9, a super heavy-lift launch vehicle in the class of the U.S. Space Launch System (SLS). The launch vehicle is still in concept development stage and probably will not fly until after 2025.

There is little doubt that China would like to operate within the international launch market, especially for communications satellites. In the early nineties, several foreign satellites were launched by Chinese launch vehicles, including, for instance, three for Australia. However, in the mid-1990s, the United States stopped issuing export licenses to companies that wanted to launch on Chinese launch vehicles out of fear that such would help China’s military.

The foreign launches essentially stopped, although Thales Alenia Space built a satellite for China without U.S. components. For this reason, China offers ‘package deals,’ i.e., a Chinese built satellite would be launched by a Chinese launch vehicle. Not many countries are prepared to enter into these arrangements.

Should restrictions be lifted, expect that China will become a serious competitor in the launch industry.

China is also excluded from participation in the International Space Station operations. This has forced the nation to pursue its own crewed program. With the budgetary restriction imposed by the U.S. and Russian space programs, this forced ‘go it alone’ course of action may well see China eventually overtake the other countries with their launch programs. A recent indication by Russia that consideration may be given to China and other countries to participate in ISS missions may soon change all of these dynamics—only time will tell.

Jos Heyman is the Managing Director of Tiros Space Information, a Western Australian consultancy specializing in the dissemination of information on the scientific exploration and commercial application of space for use by educational as well as commercial organizations. An accountant by profession, Jos is the editor of the TSI News Bulletin. 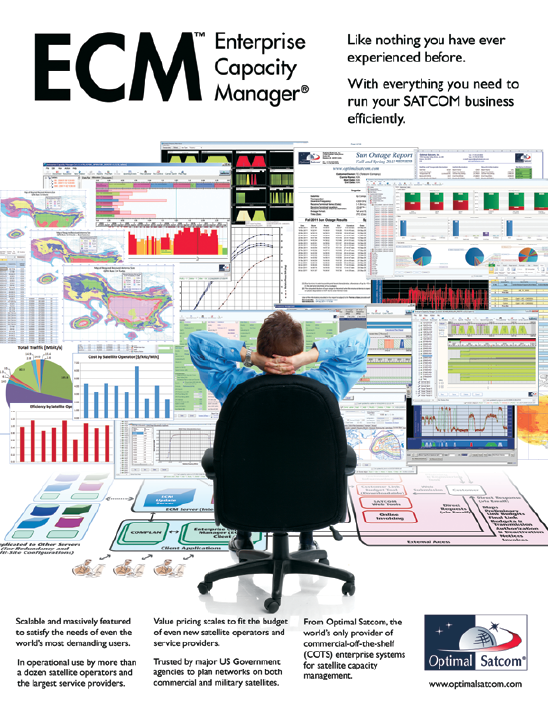