In 2017, satellite transmissions are undergoing a monumental change — the switch over to the DVB-S2 standard — the technology is more open and is  designed to be interoperable with all of the current and future media protocols, no matter if satellite-based or IP-based — and 2wcom is working to ensure such switch overs are accomplished with aplomb.

One example is Alouette that is based in Herbiers, Vendée, France. Since 1981, Alouette has become a leader in regional radio in France and also happens to be the largest and most popular broadcaster in the western region of that nation. Operating 43 of their own frequencies, Alouette now covers 15 local departments. The key to their success is their regional focus and closeness to their listeners. Alouette is known for a wide variety of popular formats and the use of cutting-edge technology. 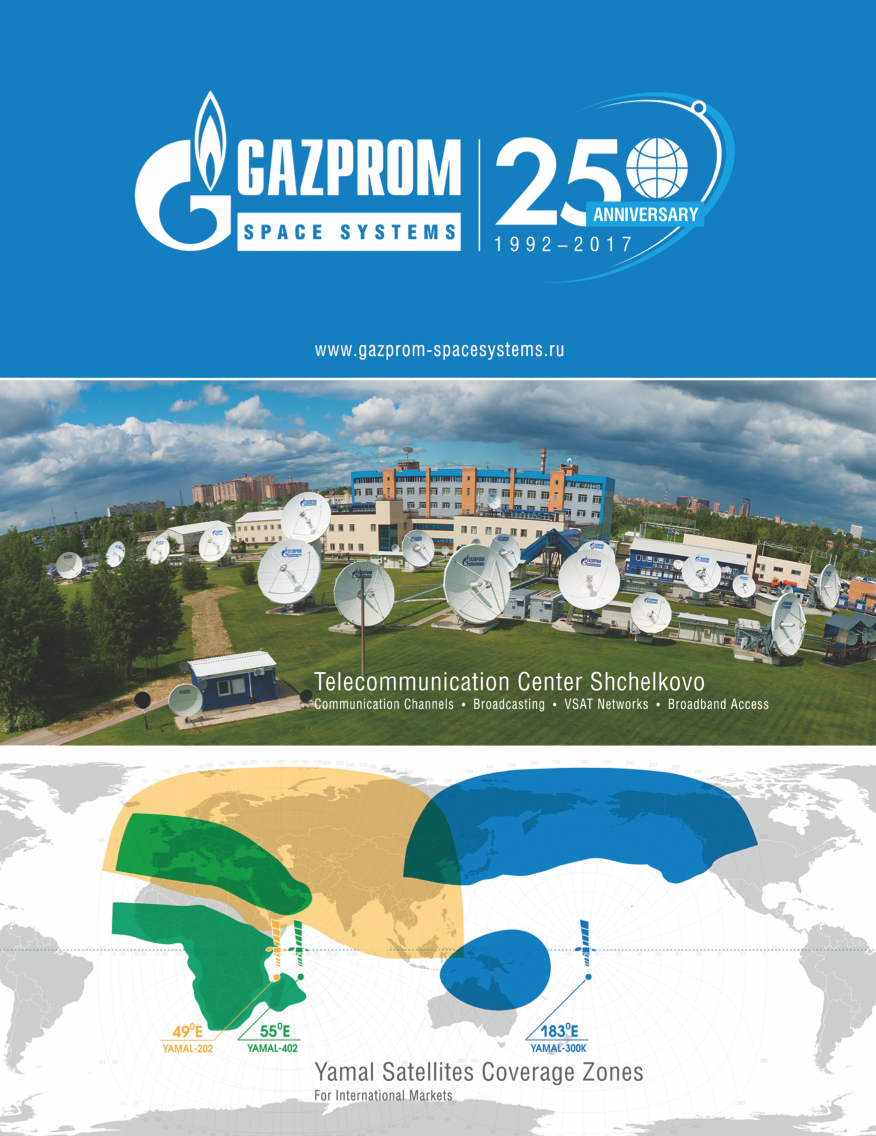 Since 1996, Alouette has been managing their own MCPC satellite uplink with their partner in the space segment, Globecast — Eutelsat. That is the main reason why the company is not participating in the NSTR project for the change over to DVB-S2 standard, which is a merger of several French broadcasters using a common satellite uplink.

Nevertheless, the technical team of engineers had been interested why the NSTR project team had selected a system solution from 2wcom. The positive feedback from the NSTR team, in combination with the visit of Werner Drews (CEO of 2wcom) in the summer of 2016, as well as a highly competitive bid, were the main reasons why the DVB-S2 project team of Alouette decided to work with 2wcom.

The system operators of Alouette quickly realized that the professional and high-quality products of 2wcom were keeping pace with the needs of a strong, regional orientated, broadcaster. As a further stroke of good luck, 2wcom had just completed the design of their own eight channel audio MPEG encoder — MM08E. The main differences Alouette noted between this encoder and the devices from  alternative manufacturer was cost-efficiency and simplicity of configuration and installation. The Alouette project team had  four major goals:

To ensure an unproblematic switchover to the DVB-S2 standard, Alouette initiated a test phase in February of 2017. The company acquired, on loan, one of each device that was planned to be a part of the new system. The technical team had an extremely close look at all of the functions and interoperability of this equipment with the on-site system. This was particularly important in regard to one of the main requirements — local content broadcasting. The detailed descriptions that follow explain quite clearly why the selected 2wcom equipment perfectly met the stated requirements of Radio Alouette.

The Alouette technical room with the 2wcom MM08E present in the hardware mix.

Alouette engineers received the first manufactured MM08E device at their station and initiated discussions with 2wcom regarding the test results of the equipment. The MPEG encoder, flexible in use for IP and satellite system requirements, also offered a wide selection of excellent quality codecs (Enhanced apt-X, AAC, MPEG I/II Layer 2/3, PCM) as well as RDS data — plus, MM08E also generates independent multiple streams.

With the use of MM08E, transmission of ancillary data and switching contact information (GPIO) could be forwarded via integrated interfaces. If more hardware channels are required, activation can be easily and conveniently managed and via software updates.

After several weeks of working intensively with the device,  all of the Alouette engineers were impressed by how dependably the prototype equipment performed. The technical staff came to the conclusion that the device is a complete and competitively priced product, rounded out by offering functions for quality management (MPEG FEC and DualStreaming to avoid IP packet losses), controlling (HTTP, Telnet, NMS and SNMP) and monitoring  (IP and MPEG parameters via SNMP v2c and relay, headphone output and alarm, source switch and event logging).

Combined with the eSIRC Server and DSR02+ receivers, this solution enables Alouette to distribute and broadcast local programs and fully control the entire channel using a hybrid satellite IP solution.

Selecting eSIRC (Satellite Inband Remote Control) was due to this web-based software for remote control precisely meeting the needs demanded for daily work, cost reduction and economy of time. 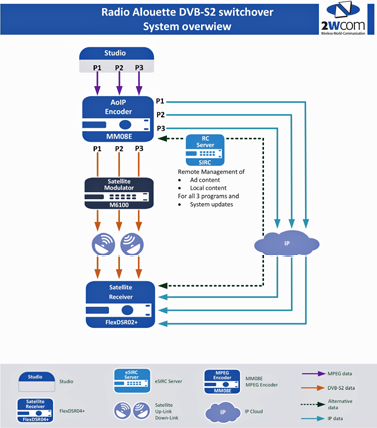 Equipping FlexDSR02+ with the SIRC option and an SD card makes it possible to use the entire range of enhanced functions of eSIRC. As a result, the technicians were able to completely access eSIRC management system via the web interface from any computer within the network for uploading data files to the internal memory of integrated FlexDSR02+ receivers (such as firmware, audio, reports and configuration). This was important for immediate use with an up-time close to 100 percent as well as for broadcasting content at a later point of time.

All content stored on internal memory of remote devices is mirrored within the eSIRC. Therefore, the network operators at Alouette can always track the state of internal memory on all integrated devices without the need for a physical connection.

If a certain file is scheduled to be uploaded, that file will also be stored in the local mirror of the concerned device. As storage space of each device is accessible via web interface, and also via FTP, network operators are able to upload files directly to the system for distribution via satellite. In case a greater volume of data needs to be processed and there is no satellite capacity left for such to occur, eSIRC can synchronize content stored on the internal memory cards with the eSIRC mirror by using FTP.

Currently, Alouette has 38 industrial computers on each of the company’s sites to manage the local news. Daily content and programming specific for every city is received and connected by an ADSL line to the master server located at the head office. The self-developed software allows every computer to be started in sequence by one or several contact relays coming from the current satellite receiver. This technology is reliable, but requires regular maintenance. Numerous kilometers of optical fiber have to be checked at least once a year.Remembering that Alouette covers a large area in the west of France, the company did not wish to use only a terrestrial IP technology — the firm wanted to optimize their content delivery by using satellite. Some towns within the Alouette coverage area simply did not have enough ADSL quality. 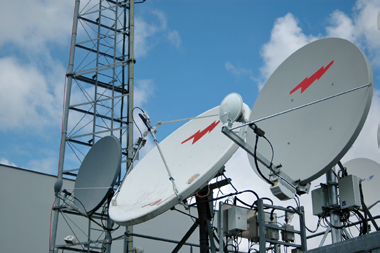 For obvious financial reasons, Alouette opted for a hybrid product that effectively allows for the management of 43 FM frequencies. After evaluating a range of possible products, Frédéric Bourgeais and his team selected the FlexDSR02+ satellite receivers to handle transport streams via satellite (DVB-S/S2), ASI input and IP, while also managing elementary audio streams and Icecast streams via IP.

The device is able to process all common coding algorithms, such as Eapt-X, AAC, MPEG I/II Layer 2/3 or PCM. Hence, the device matches up perfectly with one of Alouette’s major aims — flexibility. Regarding the requirements for quality, this multipurpose device offers a sophisticated concept for audio quality and redundancy with options such as Pro-MPEG FEC and DualStreaming to avoid IP packet losses. Also included is highly effective link redundancy between the satellite and terrestrial IP by providing advanced functions that make it possible to pass over automatically from satellite reception in one flow to a global TS-IP.

Frédéric Bourgeais provided insight into his experience with the collaboration efforts with 2wcom. “From the beginning, cooperation between the sales teams and the engineers of both companies had been based on respect and trust. We also had the chance to check the quality of 2wcom’s customer service. Because of the new system’s importance to us for the present and for the future, this was a crucial question for us. 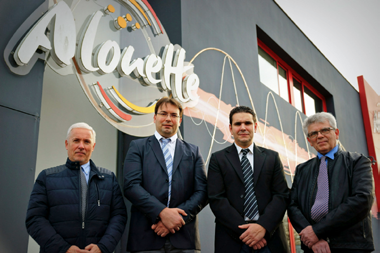 “Apart from all of the technical features, one of our most important requirements is a constructive and respectful relationship between the engineers of Alouette and 2wcom. To that end, it was key to us that the people involved could work quickly and efficiently together to interface our Zenon Media computerized broadcast systems with 2wcom’s broadcast solutions.”

This major switch over involving at least three MM08E MPEG Encoder, one eSIRC Server and 38 DSR02+ satellite receivers, has already been started and will be completed by September of this year.  The new internal structure will ultimately enable Alouette to immediately multiplex three programs simultaneously. Alouette manages 16 of their own frequencies; the additional 27 frequencies are divided between Towercast and TDF.
www.2wcom.com/satmag09

Anke Schneider is responsible for sales, PR and marketing at 2wcom Systems GmbH. Anke has 20+ years of marketing experience as well as CRM. She most recently worked at Bauer Media Group Sales & CRM prior to joining 2wcom in 2016. Frédéric Bourgeais is the Technical Director of SAS Radio Aloutte.