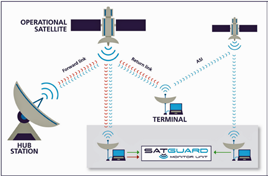 By determining the ID of the specific terminals that are causing the interference, the VSAT network operator can be informed and can correct or shut down the interfering transmission(s).

Leading satellite operator SES developed the initial concept for a standalone system, operating independently from the VSAT network under test, to identify interfering VSAT terminals. SES approached VeriSat to develop and produce a system for all satellite operators, and this became SatGuard.

SES has worked closely with VeriSat during the development of this technology and has extensively tested the tool in operations across the world. At the satellite Interference Reduction Group (IRG) workshop in Washington in 2015, Steve Smith of SES presented the background to
MF-TDMA interference as well as a case study of the SatGuard tool in action.

The Background
VSAT (MF-TDMA) networks and terminals are one of the greatest causes of RF interference (RFI) and the most troublesome to identify and mitigate. MF-TDMA interference affects all satellite operators and users globally and is time consuming and costly to resolve.

Problems with VSAT terminals generally include equipment quality and reliability, and particularly antenna misalignment, leading to cross polarization and adjacent satellite interference. Determining the source of interference has been a long standing problem for satellite operators. There is no standardized way to detect the identity of the interfering VSAT terminal, unlike the recently introduced Carrier ID technique for continuous carriers.

Due to the diverse protocols used by the VSAT MF-TDMA systems, a standalone system became the only reasonable way to come up with a unique tool that could recognize the protocols used by different manufacturers. The SatGuard product addresses this need.

The tool can be used by ‘first responders’ (satellite operators) non-invasively, without any connection to a VSAT network, to identify ASI and XPOL interference, correlate with network bursts, and decode the unique identification to help the network operator target the problem terminal(s).

An Interference Event
At the IRG workshop, Steve Smith highlighted an interference event that occurred between SES and another international satellite operator who experienced a case of adjacent satellite interference (ASI) originating from an SES satellite.

SES had already been using the SatGuard product and had characterized the MF-TDMA terminals in their network operating on Astra 3B.

As soon as the interference was reported, SES operations teams were able to use SatGuard to analyze and correlate the signals on Astra 3B and the adjacent satellite with terminals in the VSAT network. SatGuard was able to quickly identify the terminals causing the interference and decode the MAC address for each of the offending terminals.

This process required around ten minutes from the time the complaint was first received to interference suppression. As the MAC address is the identification of a physical terminal in DVB-RCS systems, this information allowed SES to easily locate the faulty terminals and immediately dispatch technicians to those locations to make the necessary corrective actions.

Proactive Use Of SatGuard
As highlighted in the presentation at the IRG workshop, SatGuard can also be used to proactively monitor for potential interfering bursts. By performing routine monitoring and trending, performance issues can be detected before they become harmful XPOL or ASI problems.

This means that action can be taken to rectify any faults with the terminal(s) before they have an impact on other services, or to an adjacent operator, thereby raising the overall quality of service, and reducing the time and effort in chasing VSAT interference.
verisat.no/