Having joined Spacecom in 2009, Eyal Copitt leads African sales for the Company. Mr. Copitt possesses more than 20 years of worldwide consulting and sales experience, of which 15 are in the African IT and Communications Markets working with governments, private and nationally-owned telco’s, the finance industry, and education networks. Prior to joining Spacecom, Mr. Copitt served as the Vice President of Sales, Africa, at Gilat Satcom and as the Africa District Manager for NetApp, where he was in charge of developing new markets in Africa.

SatMagazine (SM)
Good day, Mr. Copitt. Would you please tell us about your duties in your current position

Eyal Copitt
I have more than 20 years of worldwide consulting and sales experience, including 15 years in the African IT and communications markets. I’ve worked with governments, private and nationally owned telcos, the finance industry and education networks. In my current position as senior vice president of sales for Africa and the Middle East at Spacecom, I am responsible for all of the company’s sales operations in these regions. Right now, we are pre-selling capacity and have reached more than 50 percent of capacity on the AMOS-5 satellite prior to its deployment. We have built a dedicated and experienced sales team for the African market.

SM
What prompted the Company’s move into the African SATCOM market? How was such accomplished? Also, what are the differences between, and similarities with, the Company’s other market endeavors?

Eyal Copitt
Spacecom launched Israel’s first commercial communications satellite – AMOS-1 – to 4 degrees West in 1996 because we perceived a growing need for commercial satellites that would serve our region, as well as Central and Eastern Europe. Since then, we’ve developed methodologies to identify developing markets in need of capacity. Developing markets allow for substantial growth opportunities for our company, enabling us to become a recognized brand in these markets as they mature. Our business acumen, technological capabilities and reliability have brought us to this stage, and we are looking for our fourth satellite, AMOS-5, to take us further. The African market is the perfect next step for Spacecom. AMOS-5’s coverage for the entire continent, with connectivity to the Middle East and Europe, will reach throughout Africa’s developing areas with rural, outlying and urban opportunities. As the communications industry advances worldwide, there’s a need for more capacity and a growing interest in commercial satellite services from governments, telcos, broadcasters, ISPs and large corporations. Our team is working hard to position AMOS-5 as the satellite of choice for these and other entities. 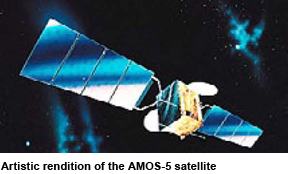 SM
Given the ever-increasing competition for this regional market segment, why would a prospective client consider Spacecom’s satellite offerings? What capabilities are offered with your satellites in C- and Ku-bands?

Once in orbit at 17 degrees East, the AMOS-5 satellite will feature a fixed, pan-African C-band beam and three regional Ku-band high power beams. The Ku-band beams combine to create an overall exposure over the continent. Coverage from both C-and Ku-bands will span the entire African continent with connectivity to Europe and the Middle East. The satellite will support multiple transponders in both C- and Ku-band. Already we have ground stations that have leased transponders, as well as communications groups, that have taken capacity on the satellite and quite a few teleports will point antennas towards AMOS-5 to deliver connectivity from Europe to Africa.

SM
There is a great deal of talk regarding fiber and undersea cable penetration into the African market... won’t this negatively impact Spacecom’s SATCOM intentions? How does Spacecom compete with other SATCOM providers in the area who have already established their market presence?

Eyal Copitt
All of these extra capacities bring new opportunities, applications and businesses to Africa that end up bringing benefits to everyone and promote economic development. City dwellers will become early adopters with residents of rural areas following their lead. AMOS-5 will provide immediate coverage to the entire continent, so people in outlying and rural regions will have enhanced opportunities to develop more quickly. There will always be competition. It enhances market quality and encourages businesses to keep customers satisfied. Spacecom will be a long-term player in this competitive market by creating a strong, stable customer base. We’ve shown that we can establish a solid market presence in Europe, and we plan to do the same in Africa.

SM
Back in July, the prime for the under construction AMOS-5 notified you of a problem with the satellite. Would you please tell us about the problem that occurred during construction of the AMOS-5 satellite?

Eyal Copitt
All is fine; the technical issues were resolved, and AMOS-5 is in great shape for its scheduled launch in December of 2011. It will be launched from a Russian Proton-M rocket at the Baikonur Cosmodrome in Kazakhstan. We’re eagerly anticipating the deployment of AMOS-5, so we can start providing comprehensive coverage to the African continent.

SM
A bit of forecasting here...how do you project the opportunities within the African market over the next year or two? Will Spacecom also be entering the non-commercial environs with programs for various governments, agencies, and military access?

Eyal Copitt
There is immense potential for growth in the African market. First, the urbanization process is continuing, bringing more people in contact with improved technologies. Second, there are more investments in the continent’s overall technology infrastructure. Also, we need to take into account larger events, such as the 2010 FIFA World Cup held in South Africa that produced many exciting technology advances for the continent. Our team sees more incoming cellular traffic and outgoing sports and news broadcasts from Africa than we did a few years back. Looking further into the future, we believe the entire continent will increase usage of satellite capacity, furthering our opportunities in the Eastern, Western, Northern and Sub-Saharan regions.

SM
How does the AMOS-5 integrate with Spacecom’s overall corporate vision? What other upcoming event can you tell us about that reveal the Company’s ongoing plans to increase their market share?

Eyal Copitt
By focusing on up-and-coming markets that are seeking capacity, and where digital broadcasting is emerging, Spacecom is establishing itself as a multi-regional satellite operator. AMOS-5 will position Spacecom at the forefront of Africa’s emerging satellite services market. Together with AMOS-2 and AMOS-3, our new fleet will cover much of the world’s fastest growing and highest-demand satellite markets in the Middle East, Central and Eastern Europe, and Africa. We are continually looking ahead to evaluate other international satellite ventures. Currently, AMOS-4 is scheduled to commence operations in 2013 with steerable Ku- and Ka-band beams to extend our footprint to South Asia and Russia. AMOS-6 is scheduled for launch in 2014 to provide steerable Ku-band with pan-European coverage, as well as coverage over the Middle East and Central and Eastern Europe, and a Ka-band beam for broadband services with coverage in Africa and Europe. With these additions — and our long-term plan to deploy an AMOS over Latin America — Spacecom’s AMOS fleet will cover more than 60 percent of the world’s population.

SM
What projects are you particularly proud of?

Eyal Copitt
I am proud to be part of Spacecom. We are constantly striving to extend the reach, capabilities and service offerings of our AMOS satellite fleet. We provide millions of people with the opportunity to enjoy the highest possible quality television programming, audio channels, voice and data services. I am particularly proud of our pre-launch sale business. Thus far, we have sold more than 50 percent of the satellite’s capacity. AMOS-5 will offer our customers a wide range of services, from DTH broadcasting to telephony services. I hope to continue selling capacity as the launch date approaches — and subsequently when the satellite is commercially operating — to maximize customer satisfaction. 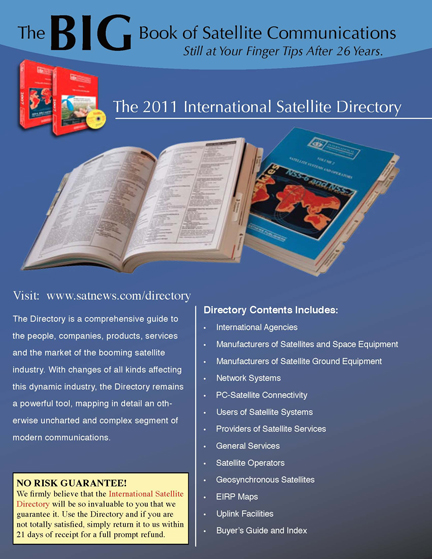