According to the paper, the advanced positioning, navigation, and timing capabilities offered by satellite systems can:

And, because these improvements are satellite-based rather than cockpit-based, they can be extended to a much broader class of aircraft, including small private airplanes that do not have sophisticated monitoring equipment, and unmanned aerial vehicles (UAVs) that do not have pilots onboard.

“As the economy improves, we can expect air travel — and air traffic — to rebound and then to grow,” said Space Foundation Vice President — Research and Analysis, Washington Operations, Marty Hauser. “We have an extraordinary opportunity to use space technology to make the global air industry better as well as bigger. And, now is the perfect time to make that happen.”

Aviation focuses on the Nexgen Air Transportation System being developed by the Federal Aviation Administration (FAA), NASA, the Department of Defense, other government agencies, and industry partners.

The cornerstone of NextGen, which is being introduced throughout the U.S. over the next decade, is a satellite-based technology named Automatic Dependent Surveillance-Broadcast (ADS-B) that:

The system uses positioning and timing signals sent from space by the Air Force’s Global Positioning System (GPS) satellites, further enhanced within the U.S. by the Wide Area Augmentation System (WAAS), which calculates and corrects GPS errors caused by atmospheric conditions and other factors. ADS-B will give air traffic controllers unprecedented monitoring accuracy and clarity, enabling more planes to safely share airspace. The ultimate goal is to transform each control tower and aircraft into a self-aware node in a network capable of tracking all nearby nodes.

In addition, ground controllers will use NextGen’s precision to move aircraft in and out of airports in a steady stream, making it possible for pilots to land in a relatively straight path, thus spending less time at inefficient cruising altitudes. This will alleviate congestion, reduce noise, and, potentially, allow the FAA to designate narrower aircraft-only corridors for direct approach routes to the airport, freeing up airspace for other uses.
The safety benefits of NextGen are many: 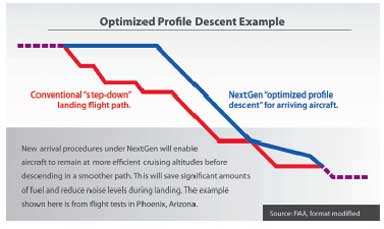 Drawing on experience with complex flight systems and automated navigation software, NASA is developing software assistants for the cockpit and the ground, including a system that interprets ADS-B data and flags important details for busy pilots and software that extrapolates future aircraft positions to more smoothly direct landings.

The networked nature of NextGen will improve airlines’ and airports’ ability to mitigate the effects of weather, one of the major causes of aviation delays. It can also assist with search and rescue efforts in the event of an accident by giving earlier and more accurate indications of problems. 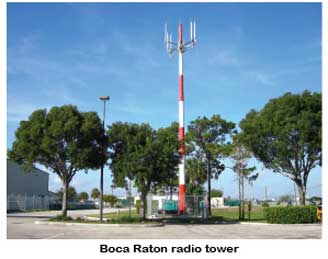 Plus, NextGen can significantly reduce environmental impact by facilitating more direct routes and more efficient take-offs and landings, and by using weather satellite data to select the most efficient flying altitudes.

Initial ADS-B testing has been extremely promising and rollout to additional sites has been approved. Although the deadline is 2020 for providing situational awareness to pilots and ground controllers, airlines should be able to use the system earlier on airplanes with ADS-B equipment at any airport that has the required ground infrastructure and control systems. Major airports are at the top of the list for equipment installation, but new software applications and flight rules must be established before the information provided by ADS-B can be used to bring about improvements in air traffic management. By the end of fiscal year 2010, the FAA expects to have 340 of the 794 ADS-B ground stations installed, with the remainder scheduled for completion by 2013.

The NextGen program is an ambitious undertaking to modernize air transportation, and it will ultimately bring about improvements in the way we fly.

Aviation makes recommendations to government on how to even better use and more rapidly deploy these technologies:


Prioritize investment in NextGen equipment for aircraft flying into airports that are the most congested or most likely to receive noise complaints
Enhance the passenger travel experience with satellite-based in-flight entertainment systems.


To read Solutions from Space: Faster, Safer, Greener Commercial Aviation or to download a copy, go to
www.SpaceFoundation.org/research. 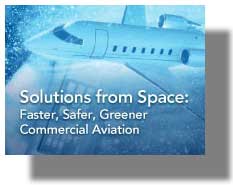 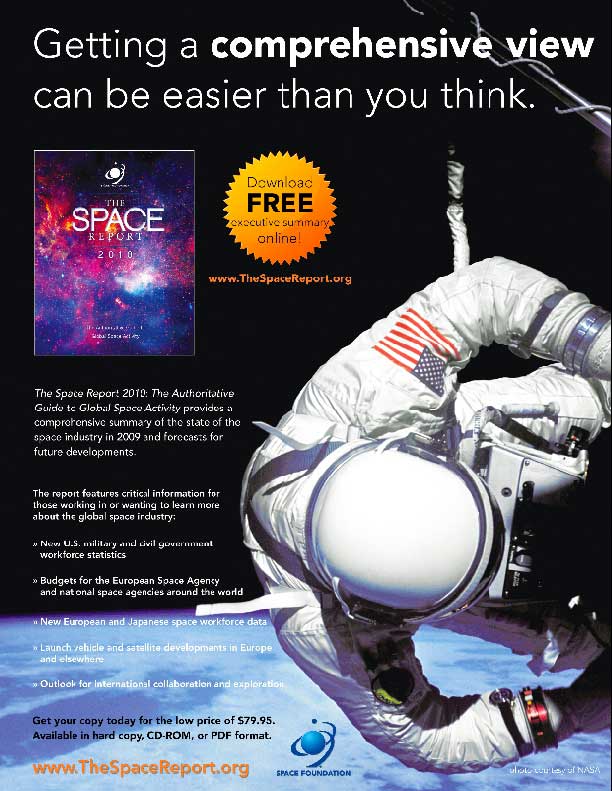