The way most internet works these days is a simple, three-part process: The internet service provider (ISP) obtains the internet signal via fiber from a collection of data servers, moves that signal to a central station, or hub, and then distributes that signal to the modems of individual subscribers.

Due of their highorbits, Viasat’s geostartionary satellites can cover lage areas on the ground with service.

Those first two parts tend to be the easiest to accomplish, while the third — getting the signal to those modems — is the tricky part. That final leg is often called “the last mile” and, for many homes without adequate internet service, it’s that last mile (or multiple miles) from the hub that makes the difference.

If you think about cable or fiber ISPs, they require a technician to come out and wire each location, then connect that to the local hub. As most homes are already fully cabled, it’s relatively simple to connect all the homes in a neighborhood.

If your home is not in a populated area where it makes economic sense for the ISP to serve you with short runs from the hub to your home, it’s less simple. In the case of cable or fiber, it may mean they don’t serve you at all. For DSL from the phone company, they might serve you, but the farther you are from the nearest central station, the worse that service becomes. 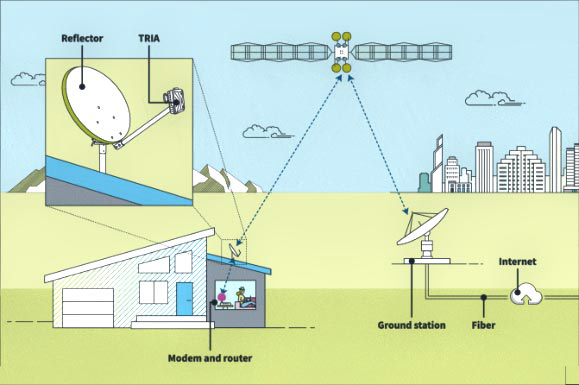 That’s why satellite internet became a way to bridge the digital divide for people outside the cable and fiber zone. Satellite ISPs such as Viasat work in essentially the same three-step fashion; however, instead of a central station, the internet signal is delivered via fiber to a large antenna (called an “Earth station”) on the ground, which then moves the signal via radio waves up to the Viasat satellite.

In this model, the satellite is functioning similar to that of a central office and that “last mile” is more like 22,300 miles — the altitude at which the Viasat satellites orbit. The signal comes back down to your home or office and is captured by an antenna (dish) outside the home that’s aligned with the satellite. From there, the signal goes into a cable through a hole in the wall that connects to a modem — just like any other ISP.

One of the questions often heard when talking to new customers is whether they can use the same dish they already have for satellite TV. That is certainly a good question, but the answer is a firm “no.”

The main reason for this is that satellite TV only goes in one direction, broadcasting video signals from the satellite to the home with no “return flight.” Internet signals have to go both ways, and as the signals to and from the satellite are not broadcast like video, there’s a greater amount of bandwidth needed to move all of that data. 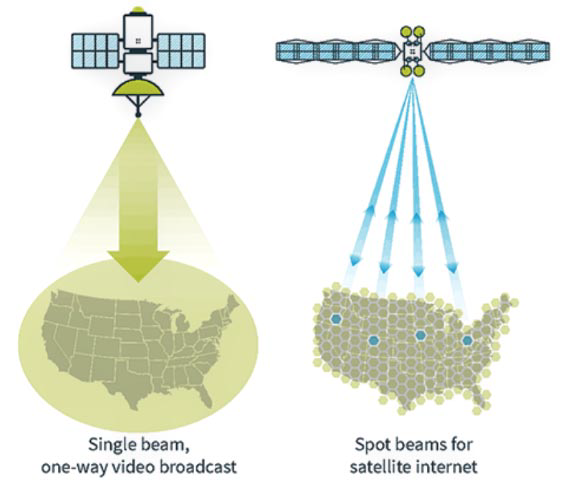 This illustration shows how one-way beams from a video satellite
differ from the spot beams Viasat uses to deliver internet with
a two-way beam.

That leads to another interesting element about how Viasat delivers internet via satellite. While the video satellites can broadcast one way in a very large beam that can cover an entire continent, doing so for internet would be a waste of that bandwidth.

Think of a radio station at, say, 97.3 FM. If you’re within 50 or so miles of that broadcast, you’ll get your local station at that frequency. In the next state over, your rock station at 97.3 might be a country station, as the distance has allowed for a re-use of that portion of the radio spectrum.

Viasat satellites receive the Ka-band of the radio spectrum near 30 GHz and transmit near 20.2 GHz and the signal is deployed in what are called “spot beams.” These are aimed at specific areas on the ground and they overlap (see illustration in Figure 1). If we’re using the same part of the spectrum for this, then how does that work?

The answer is we break down the bands using different polarizations. In case you’re not an electrical engineer, just think of it as different colors.

Within a single spot beam, we can use a number of different colors to carry the signal, reusing that same bit of spectrum. Viasat has dedicated quite a bit of effort over the past decade to improving how this is accomplished and that has resulted in a highly efficient use of the radio spectrum the company has been allocated. This, in turn, allows Viasat to deliver more bandwidth to all of those modems. 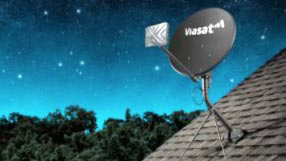 A look at the TRIA and reflector dish. Because our
satellites are over the equator, you’ll notice these
antennas anywhere above the equator always
point south.

As we’ve increased the power of our satellites, Viasat has also had to up our game on the ground. Just as more towers equate to better coverage for your smartphone, more of those Earth stations adds up to a stronger network for the company’s offered satellite services.

Simultaneously, moving the processing functions into the cloud has allowed us to create smaller, less-expensive Earth stations than we did previously. That helps make it economical to install more of them.

We’ve touched on all the main components of how Viasat delivers satellite internet; however, there’s one more element to mention because it’s something you actually see positioned at your home.

What many call “the dish” is actually a couple of different things. The dish itself is simply a reflector: a piece of stamped steel aimed at the satellite that works to focus the signal read by the TRIA. This is the metal box at the end of the arm that’s connected via cable to your modem.

“TRIA” is an acronym for “transmit-receive integrated assembly” but all that’s needed to know is that it’s essentially a radio that can send and receive signals. The TRIA also has a powerful amplifier in it to enable it to push a signal back to the satellite that is on-orbit. Along with your modem, the TRIA is the real workhorse at your location — not the larger dish.

A modem, by the way, serves as the interface between the radio signals received via the TRIA and your computer or router. The modem also accomplishes other work, such as authentication to ensure you’re a member of the network and to modulate and demodulate the signal.

Even if the basics of how the signal gets to you from the satellite are relatively simple, it does involve a great deal of complex technology to make it all possible. It’s a technology Viasat works on constantly to improve.

The company’s goal is to ensure high-speed internet access is possible to obtain just about anywhere on Earth over the next few years.
www.viasat.com

Alex Miller is the editor of the Viasat corporate blog. A veteran newspaper reporter and editor, Alex has been with Viasat since 2012 and works out of the company's office in Denver, Colorado.