Polar markets have traditionally been an afterthought of a region for broadband access.

With residents having to “make do” with dial-up Internet access, low-speed L-band network connectivity at speeds that don’t meet most definitions of ‘broadband’, or high priced Ku-band connectivity, assuming that VSATs even have a view of GEO satellites. 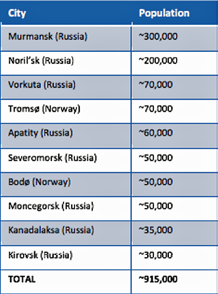 For the not so insignificant populations that live above the Arctic Circle at 65 degrees north, capacity has been relatively constrained, such that despite the large ARPU supported by consumer and business broadband services alike, the relatively small number of people willing to pay for such services in the Arctic still translates to limited revenue opportunities.

NSR’s recently released Polar Satellite Markets report found that Broadband Access in the Polar regions (primarily in the Arctic) is one of the key markets expected to be altered significantly after the introduction of LEO-HTS services in the 2020 time frame.

The current broadband picture in the Polar region is largely Ku-band VSAT and GEO-HTS, with a handful of platforms having been launched in countries that have some spillover into Polar, such as U.S./Canada with ViaSat, parts of Europe with Ka-Sat, and to some extent parts of Russia with Express-AM5/AM6.

These payloads have largely targeted the major markets listed in the chart, but with a relatively small population in the Polar region, part of these countries - and still under these beams - will ultimately end up benefiting from better quality of service at a better price.

ARPUs in the U.S. are somewhat higher due to ViaSat having thus far seeing more success in its business model, with WEU seeing slightly lower ARPUs, and CEEU seeing lower still, although still within the $20-30 per month range.

However, this all is likely to change markedly with the introduction of Non-GEO-HTS in the form of a LEO-HTS constellation, which is expected to target broadband access demand. 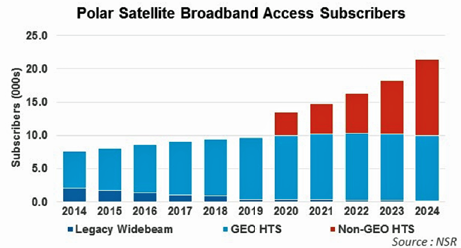 A LEO-HTS constellation targeting the broadband vertical is expected to more or less double the market in terms of subscribers, adding around 12,000 subs between 2020 and 2024 that are believed to be incremental demand (without significant cannibalization).

Not all subs are created equal, though, and NSR does believe that Non GEO-HTS subs will generate somewhat lower ARPU.

Overall, broadband access services in the Polar region are expected to be relatively niche.

For instance, by 2024, approx. 22,000 subs translate to an annual market size of around $63M - hardly a tiny market, but also hardly one worth launching dedicated capacity over. 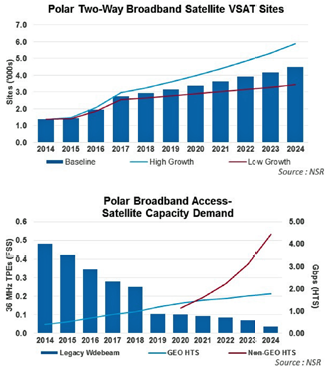 Traditional FSS capacity that currently serves broadband access in the region—of which there is very, very little—is expected to no longer be cost competitive; however, this would represent a tiny sliver of a niche market currently (~1,500-2,000 subs).

Ultimately, the Polar broadband market will by definition continue to be a niche market simply due to small populations. The region has historically been characterized by highly ineffective or otherwise cost uncompetitive fiber and terrestrial broadband options.

However, moving forward, it is expected that GEO-HTS, and eventually Non GEO-HTS, will be able to bring down the cost of broadband to the end user, expanding the market to a slightly larger niche.

Although the population base is close to a million in targeted cities in Russia and Norway, which represents more than 250,000 households, the satellite broadband subscriber base is expected to be less than 25,000 or below 10 percent by 2024 as other challenges will be at play in servicing these cities. These challenges include equipment and setup costs, ongoing bandwidth costs and a lack of distribution to end consumers and focus by retail partners.

Mr. Crisp joined NSR in 2014, following a Hong Kong based engineering role at Aurecon. Mr. Crisp is the co-author of NSR’s annual M2M and IoT via Satellite report and also Linear TV and other video broadcasting reports.

As a member of NSR’s Fixed Satellite Services (FSS) group, Mr Crisp’s areas comprise of M2M and IoT communications - including both the satellite and terrestrial M2M landscape. Previous consulting experience includes forecast analysis and risk management of natural disasters in Manila, where he made recommendations to policymakers about backup and emergency telecommunication links for use in city and nationwide emergencies.