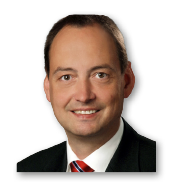 The celebrated Italian chef Antonio Carluccio defines the essence of good cooking as the ability to achieve the maximum flavor as efficiently as possible.

Satellite communication today depends not so much on flavor as on the ability to deliver robust solutions combining precision, efficiency and affordability. Hiltron’s success over many years of SATCOM system design and production stems from a threefold approach:

Second, Hiltron’s long experience in product selection, distribution and support. If a device is substantially ahead of the competition, the company often negotiates a partnership agreement to encourage an ongoing close relationship with key technology providers.

Third, if the company’s system integration activity identifies a technical challenge which cannot be solved from existing product sources, then resident are the proven in-house skills to develop a solution in-house.

Combining IT and IP technology allows SATCOM systems of any size and complexity to be controlled by a relatively small number of supervisors, regardless of location. An important element in the design of such systems is to ensure that the user interface is easy to learn and, wherever possible, shares a common style across multiple devices.

This has obvious advantages in terms of staff training. Less obviously, but importantly, it also maximizes staff efficiency and minimizes stress. A sensibly designed system should, for example, be easily configurable to monitor all relevant operating parameters for signs of trouble.

If a problem is sensed, the relevant operator is automatically alerted and the event itself logged for future reference. This is the thinking which motivated the development of the company’s SORBAS product range. 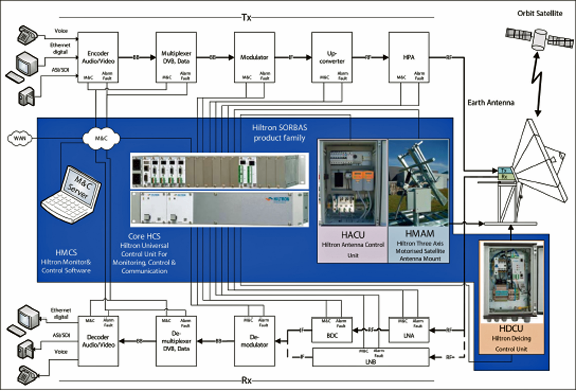 SORBAS brings together — as one product series — a range of devices developed in the firm’s twin roles of manufacturer and provider of completed customized systems. These include the HCS-Core, HMAM, HACU, HSACU, HDCU-E and HMCS. Figure 1 shows a typical configuration with the SORBAS core in blue.

HCS-Core performs as a control element for tasks such as switching downconverters, integrated receiver/decoders, digital video broadcast encoders, high-power amplifiers and waveguides. The full-rack-width version can accommodate up to 16 slot-in card modules and is their largest and most versatile satcom controller to date. 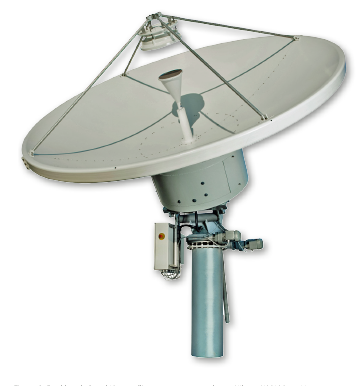 Figure 2 shows a dual-band (C- and Ku-) antenna mounted on an HMAM. HMAM can be used for a wide range of applications including broadcast and telecommunication downlinks. An optional motorized feed changer allows the head to be moved quickly to a new position for switching between frequency bands.

HMAM comes complete with professional-grade drives for azimuth and elevation plus a high-accuracy polarization drive. The combined head and drive form a three-axis motorized mount with 220 degrees of continuous azimuth adjustment, 90 degrees of elevation adjustment range and fully adjustable polarization.

The control GUI displays all the information required to set and maintain azimuth, elevation and polarization, including current and target positions plus a database of potential accessible satellites.

An increasingly important aspect is the production of satellite links for high-quality and high-reliability satellite news gathering applications. HSACU (Hiltron Satellite Newsgathering Antenna Control Unit) provides fully-automated satellite auto-acquisition and is compatible with all leading motorized satellite newsgathering antennas. Designed for integration into SNG trucks or for refurbishment of existing SNG antenna control systems, it is housed in a compact rack-mountable chassis.

HDCU-E (Hiltron De-Icing Control Unit) is a combined ice-sensing and dish-heating controller for use with satellite antennas of any kind. It is capable of handling up to 14 kilowatts of power across multiple heating groups or, optionally, up to 450 kW for large dish antennas.

Each group is divided into three independently-controlled heater arrays. Each array in turn feeds up to three antenna heater circuits. Snow detection is via a reflective sensor with a polarizing filter. Sequential switch-on is performed within the controller to prevent rapid changes in current load when the antenna heating process is activated or deactivated. 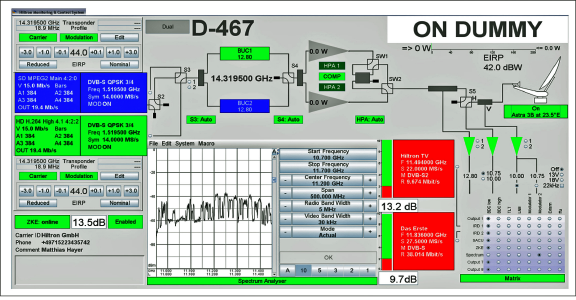 The HMCS can also control additional customer-specified satellite communications and video equipment. Seen in Figure 3, the control GUI displays a wide range of relevant parameters including signal data and, at lower right, the matrix configuration.

Recent and Ongoing Projects
Projects currently progressing include installation of six complete Hiltron SORBAS systems at locations in Asia, Europe and South America for a major satcom service provider.  A special feature of the HMAM element of SORBAS is its extremely high mechanical rigidity.

For the Asian installation, a key requirement was the need to increase the wind stability rating of an HMAM motorized antenna mount with a 3.7 meter antenna from the specified 330 to 338 kilometers per hour. It doesn’t sound like a big difference but the increase in wind force is exponential so some static adjustments had to be implemented to increase stability.

Based on a Fiat Ducato, the first centered on the integration of a complete SATCOM system allowing news or Outside Broadcast (OB) crews to deliver video and audio content to the network’s main studios from practically any location.

The entire system is operated via an HMCS monitoring and control system in conjunction with an HSACU antenna controller which is designed specifically for satellite newsgathering applications. The second vehicle is based on a Mercedes Benz Sprinter and the third on a Mitsubishi truck (shown on left and right respectively in Figure 4).

In a combined endeavor with Danmon Group Sweden, the company completed a satellite communication project at a major teleport in Latvia. The project included a five-channel satellite link, which was required to carry television content to Europe from the 2016 Summer Games in Rio de Janeiro. Central to this contract was the provision and integration of 3.7 meter satellite dish on an HMAM motorized mount plus a Hiltron HACU antenna control unit and an HDCU ice-sensing and dish heating system.

A satellite downlink system was completed for Ireland’s national public service broadcaster, Raidió Teilifís Éireann. This new resource consists of a 3.7 meter antenna, an HMAM motorized antenna mount and HACU controller. It was required for use as a Ku-band link receiving video and audio data from multiple sources. The project was managed by Dublin-based systems integration specialist Libirel Communications Limited.

A major Asian telecommunications service provider has ordered 120 fixed-mount satellite communication antenna systems from Hiltron. Each incorporates a 1.8 meter Laminas dish, which will be used in conjunction with a 6.3 meter
GD-SATCOM antenna.

In the military communications category, Hiltron completed data and voice communication systems for one of the largest naval fleets in the NATO Maritime Group. This was the latest in a series of projects that has been ongoing on a ship by ship basis since 2011. Each installation provides the codec facilities needed for secure satellite-based communication between vessel and land, including IP network access and vocal telephony.

Another recently completed project was the installation of a global satellite tracking system for one of the world’s largest aerospace companies. This includes six Hiltron HMAM motorized satellite antenna mounts integrated with a Hiltron HACU antenna control unit and associated motor-control electronics.

Each of the six installations in the global satellite tracking system is configured to operate in main-plus-backup roles. Two are located at ground stations in the southern hemisphere, two in Europe and two in North America. Each HMAM mount supports a 2.4 meter dish and is fitted with a wind sensor which activates a safety lock if wind speed exceeds 80 kilometres per hour. The system is being used in a variety of modes to ensure continuity of the client’s satellite network. 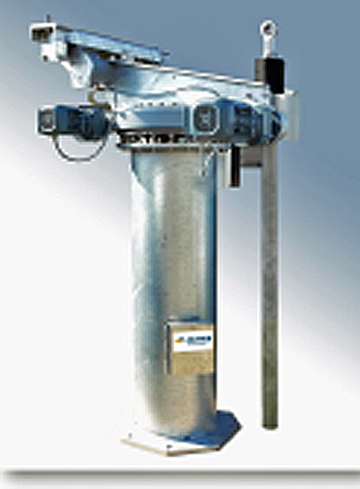 Hiltron’s most recent development is the new Super-HMAM three-axis motorized antenna mount. Based on the highly successful HMAM, Super-HMAM (Figure 5) is designed and built to accept reflector dishes of 4.9 meters in diameter, substantially larger than the standard HMAM.

Super-HMAM has a newly developed support structure that can survive storm-condition wind speeds well in excess of 200 kilometers per hour. Super-HMAM retains all the features that have made HMAM the preferred choice for two-way VSAT communication or receive-only downlink applications in the broadcast, telecommunication and military sectors.

Super-HMAM includes high-grade drives for azimuth and elevation plus a high-accuracy polarization drive and is fully compatible with Hiltron’s standard HACU antenna positioning system. A combined head and drive are incorporated, forming a three axis motorized system with 180 degrees of azimuth adjustment, 90 degrees of elevation adjustment range and fully adjustable polarization. Positioning accuracy is +/- 0.02 degrees and position-display resolution is 0.01 degrees.

The antenna control unit and associated motor-control electronics are contained in an IP65-rated weatherproof outdoor housing with a hinged front access port secured by dual key screws. An emergency cut-off switch is easily accessible. Above the housing is a resolver which is used to measure the azimuth angle of the antenna. An identical second resolver allows constant monitoring of antenna elevation. Azimuth and elevation drive motors each operate through a reduction gear.

Super-HMAM can be controlled via an IP link from a PC running a graphic user interface compatible with standard web browsers. The control GUI displays all the information required to set and maintain azimuth, elevation and polarization, including current position and target position plus a database of potentially accessible satellites. Once a satellite is selected, precise access parameters can be calculated at the press of a single button.

The entire antenna support system is built to withstand standard atmospheric pollutants and to operate at humidity levels of zero to 95 per cent over a temperature range between 25 degrees (optionally 55 degrees) down to -25 degrees Celsius. Additional protection can optionally be provided to withstand pollutants such as salt encountered in coastal and industrial areas. The rotating pedestal mount is made of corrosion-resistant hot-dip galvanized steel.

IBC2017, Amsterdam
Plans are now being made by the company to demonstrate the full range of systems integration, manufacturing and product distribution capabilities at the upcoming International Broadcasting Convention, which will be held from September 15 to 19, at the RAI Center in Amsterdam.

Please visit the Hiltron Communications stand at the venue if you plan on attending this major trade show event.