Satellite communications have earned their rightful place in the arsenal of communication solutions for a truly connected world and are often the only viable solution for remote areas. 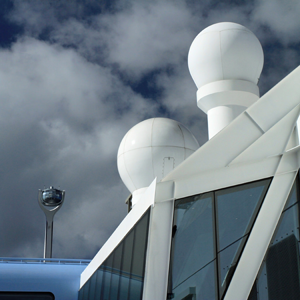 Maritime SATCOM involves a combination of two challenging tasks: SATCOM on the move and performance under extreme weather conditions. Customers expect to have broadband Internet connectivity at low cost wherever they are and in all conditions.

Designing a terminal that can withstand extreme weather conditions, one that is small, robust, lightweight, and attractively designed all the while providing constant broadband connectivity while following worldwide standards and regulations—now, that is definitely a true challenge. 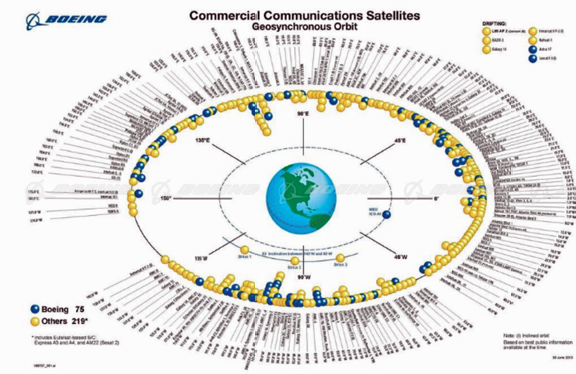 Figure 1. A Crowded Sky—Commercial Geosynchronous Satellites in Orbit. Image is courtesy of Boeing.

Why Do We Need Regulation + Standards?
Geostationary satellites keep their fixed, relative positioning in space by moving along a very specific orbit and maintaining a zero-sum force vector at all times. Geostationary positioning becomes possible at a predefined height of 35,680 km (22,170 miles), a predefined speed of 3.07 km/s (1.91 miles per second), and in an orbit that is directly above (parallel to) the Earth’s equator.

Communicating from Earth to a single satellite at that distance is not, in itself, a major challenge, but doing so in a crowded sky is a significant one. 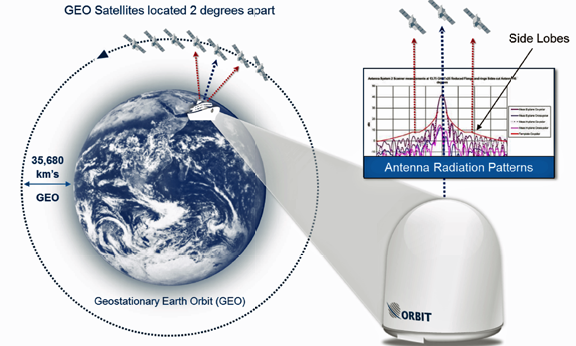 Transmission from Earth must be focused exactly on the correct spot or there may be interference with another satellite. Strict regulations dictate that Earth stations limit their transmission towards adjacent satellites by pointing exactly toward the target satellite (an easy enough feat from a fixed system, but quite challenging when transmitting from a mobile platform). In addition, they must test the antenna emission patterns so as not to contain any “side-lobes” emitting energy off center.

Intensive development, simulation and testing efforts are required in order to design and produce antennas that comply with today’s regulations. While this task is not easy to begin with, even more challenges come into play as the desired size of the antenna becomes smaller, leading the industry to agree on de-facto standards for the minimal antenna size that can still produce a “performing” antenna.

The technical design of smaller Ku- or Ka-band antenna systems combined with the need to comply with the regulation requirements of the satellite operators can result in higher operational costs and lower cost/performance ratio. 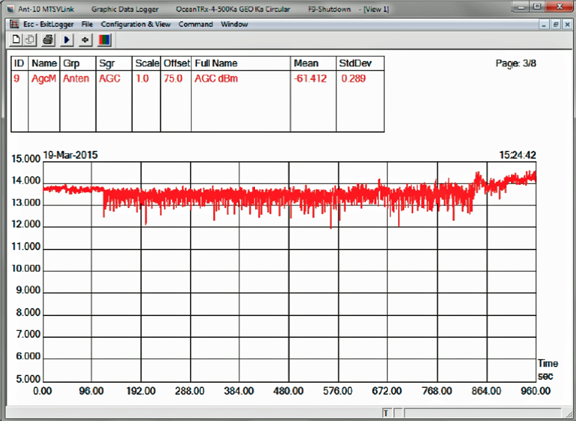 These days, it is clear to operators that not only immediate CAPEX investments count, but total cost of ownership (TOC) is important— regulation, reliability, life cycle maintainability, installation simplicity, and so on.

ORBIT strongly believes that for most markets, the 1.2 meter “Dual-offset Gregorian” antenna was found to have the best combination between excellent regulation compliance (side-lobes, x-pol) and very low dome-to-antenna size ratio.

Implementing the complicated tracking and stabilization algorithms, (keeping in mind that the GEO Satellites are located 1.5 - 3 degrees apart) is a challenging task.

Better Performance Resulting In Lower Service Costs
System performance affects service cost. The better designed a system is, with maximum capability to transmit and having pointing capabilities without interference, the less service costs are incurred

System performance and pointing accuracy, in the end translate to availability; customers would like to be connected and get service. That is what they are paying for—it’s as simple as that.

Pointing accuracy is all about service and availability. For example, ORBIT’s test of OceanTRx4-500 Ka-band with the following profile:

Fluctuation that can be easily translated to the pointing accuracy by this chart.

With fluctuation of 0.289 dB, the pointing accuracy is less than 0.15 degrees. This is translated to availability and system performance:

International Telecommunication Union (ITU): defines and recommends the envelope limitations under which transmissions of ships, aircraft and trains could be operated with GEO satellites worldwide. Basic level regulations to create order on international level and prevent chaos by standardization.

Regional regulatory organizations: ETSI for Europe (www.etsi.org), FCC (www.fcc.gov) for North America, Anatel for Brazil and others, derive their own standards and regulations based on the ITU recommendations. Those regional organizations would like to prevent chaos and manage their own local spectrum.

Satellite operators: Primarily concerned about the EIRP/Bandwidth as a function of the offset angle from beam center (EIRP/BW) and about Cross Polarization Discrimination (XPD) at beam center, which is of practical importance for preventing interference to adjacent satellites and to their own satellites by XPD. Satellite operators would like to sell their bandwidth to as many people as possible with as much profit as possible. They truly do not want the vendors to interfere with them there. 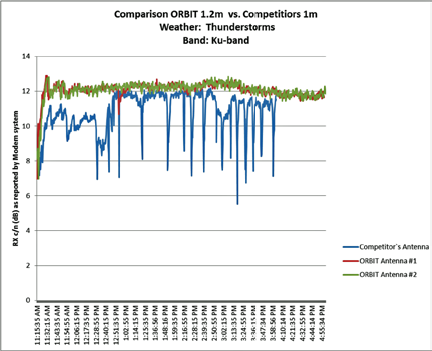 When we talk about regulations, two main mask types are considered (for ITU and Regional Regulations)

At ORBIT, we believe that the most important masks to consider are ITU and FCC as shown on the right

Note: Presently, with usage of smaller antennas (30 to 60 centimeters, for example), satellite operators, such as Eutelsat, Intelsat, FCC, ETSI, do not have to comply with “Gain, Side-Lobes mask” (e.g., FCC 25.209), but are enforced to comply with these EIRP/SD “masks.”

Availability + Reliability
Customers expect maritime SATCOM terminals to be reliable and maintain communication 365 days a year. Those terminals are usually located in places where accessing them and maintaining them during the voyage is almost impossible—yet, high reliability is still required. On top of that, it is quite difficult to assume that on those vessels, one can find communication experts as a standard.

To summarize, availability has a large influence on total cost of ownership.

As an example, an MTBF of ORBIT OceanTRx4 basic system is 27,900 hours. 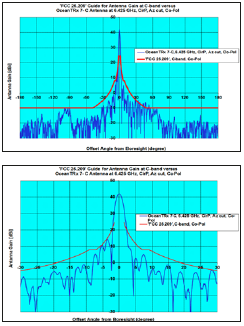 An effective maritime solution must consist of the following parameters:

• Pointing accuracy to maintain high availability and not to interfere with adjacent satellites while in harsh marine conditions
• Ability to meet satellite regulations while reducing the dimension of the systems
• Reliability of the system and high MTBF with low MTTR. No periodic balancing
• Performance in an RF noisy environment – to meet EMC standards such as IEC 60945
• Easy and fast installation of pre-tested systems with only several hours on the dry dock
• Wide configurations of band support and ability to support demanding applications to satisfy customer needs in a compact package
• Keep total cost of ownership as low as possible 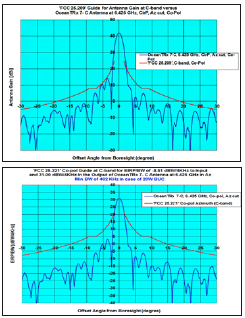 Providing high throughput and quality broadband communication via satellite, the company has already received an order for several AIRTRx™60 systems from an Asian customer.

Designed to accommodate the regional and global coverage needs of the airborne communication market, the low-weight AirTRx™ 60 is built to empower critical applications.

AirTRx™ 60 complies with the most stringent worldwide SATCOM regulations and certifications, including RTCA/DO-160G.

Following the demand from the government and defense market, ORBIT released their MPT 60 Airborne VSAT Antenna systems suitable for mission aircraft and UAVs. 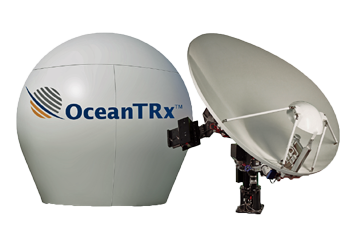 ORBIT is a public company traded on the Tel-Aviv Stock Exchange (TASE: ORBI). The company has global presence of sales and customer support with footprints in the United States, Europe and the Far East.