The Internet of Things, or IoT, refers to the billions of physical and logical devices worldwide that are now connected to the internet, all collecting and sharing data. In fact, the number of devices on the planet surpassed the number of people some years back, and this upward trend is continuing. 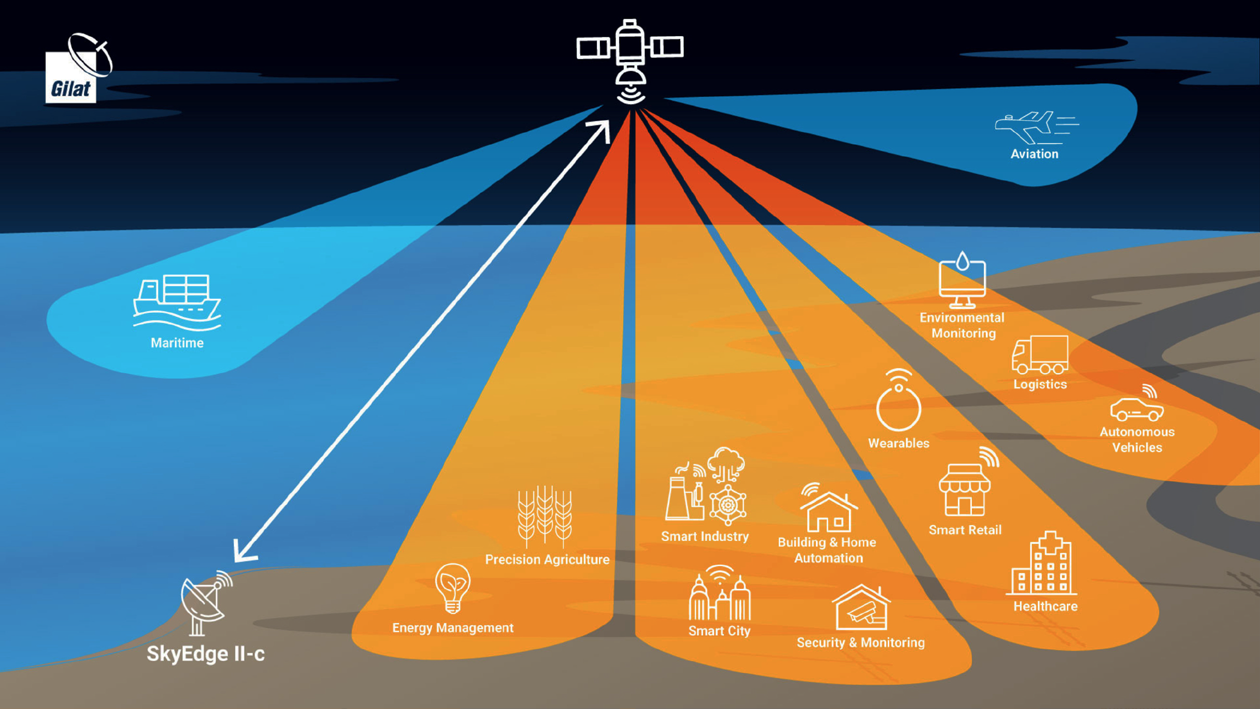 Figure 1. IoT applications over satellite. Image is courtesy of Gilat.

With access to inexpensive computer chips and sensors plus the ubiquity of wireless networks, it’s possible to turn anything, from something as small as a pea to something as large as a city, into a part of the IoT. More precisely, IoT uses specific sensors, protocols, networking equipment, programs, and applications to retrieve, transfer and analyze data in order to obtain value-generating information across an ever-growing set of use cases, including precision agriculture, Industrial IoT (IIoT), Enterprise IoT (EIoT), telemedicine, logistic chains, Smart City, retail, UAVs, environment and more. 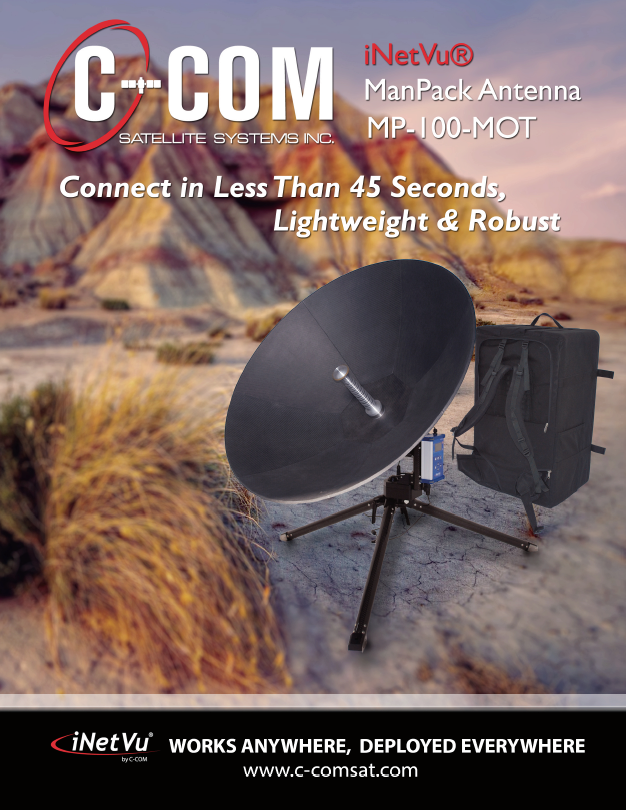 IoT has expanded its footprint around the globe to include places that have limited or even no internet connectivity, such as remote farms and factories, ships, mines and oil rigs. The data generated by these IoT implementations is key to the safe and cost-efficient operation, monitoring, planning, and advancement of the businesses they support. This data has been coined the “new oil of the digital economy.”

Satellites Are Key To IoT

Satellite communication (SATCOM) solves the business imperative for fast broadband speeds and ubiquitous coverage to transfer large volumes of data around the world. Satellites can reach most, if not every, location on the planet, are reliable and flexible and, most importantly, can provide communication services in areas not served by terrestrial networks (which includes the vast majority of the Earth’s surface.) Whether in the middle of the ocean or in a remote corner of the world, data can be conveyed reliably through satellite communication.

However, as IoT encompasses a wide spectrum of verticals with different communication requirements, it follows that no single satellite communication architecture and technology can provide an optimal solution for the wide variety of use cases, and that different satellite access architectures and technologies are required. We see a similar situation in terrestrial IoT connectivity that uses different access technologies for different use cases and sensor types. (See Figure 1.)

Technology has matured to the point of having small transmitters and antennae that can be connected to or integrated with sensors providing direct connectivity to satellites, usually but not always in Low Earth Orbit (LEO). Today there is a growing number of satellites offering direct sensor-to-satellite access using technologies such as NB-IOT, LoRaWAN or SigFox. This solution makes sense when the number of sensors is relatively low and when the amount of data transmitted is not too large. It is also important to note that as most of these satellites store the data for later transmission, lower latency use cases are not suitable for this type of setup.

Finally, in the case of direct access for sensors in covered areas, connectivity to satellites might be compromised. On the other hand, indirect access means that the sensors are connected to an aggregation point where the satellite link occurs. This type of connectivity is the best solution when needing to connect large numbers of sensors.

Gilat has been an active player in this field, powering numerous applications such as SCADA, IIOT and agriculture with indirect connectivity. For example: In the UK, Vodafone use Gilat’s satellite network to service the utility companies Cadent and National Grid in the Oil & Gas industry. The SCADA network has satellite backup/backhaul connectivity for remote locations, mainly monitoring, site connectivity, and high priority traffic. Another example of a SCADA deployment is for TransCanada. In this case, the satellite-based monitoring system is on their pipeline system. (See Figure 2 for a look at SCADA applications for IIoT.) 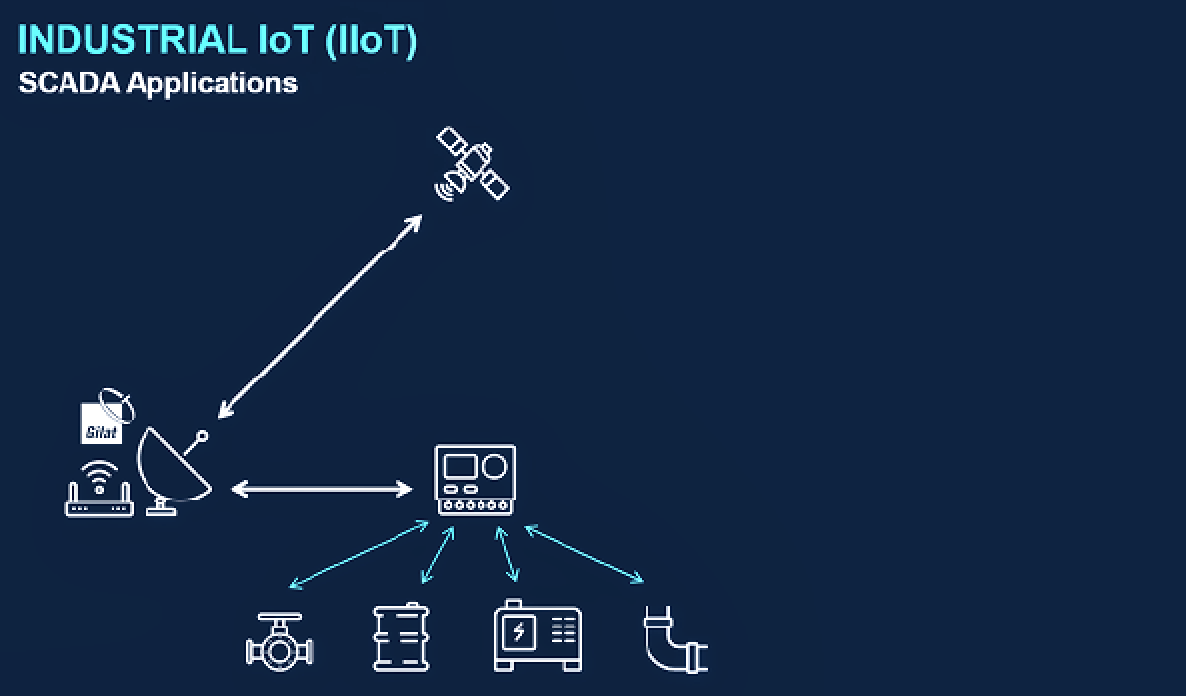 Figure 2. Image is courtesy of Gilat.

In the agricultural sector, Gilat partnered with TIM Brazil to overcome one of the industry’s main challenges: communications and data sharing between the business offices and the farms, where there is usually a complete lack of or very poor communication signals.

Gilat’s satellite backhaul solution enables 4G/LTE services to the agribusiness IoT market, supplying thousands of VSATs to complement TIM’s cellular coverage program, “4G TIM in the Field.” The new 4G network enables connectivity between agriculture machines and operators to real-time control and monitoring of harvesters and tractors, ensuring cost-effective decisions, better crop management, and greater speed, efficiency, and productivity in the production flow. The system was proven to greatly increase the productivity and output of the agribusinesses in the program. (See Figure 3.) 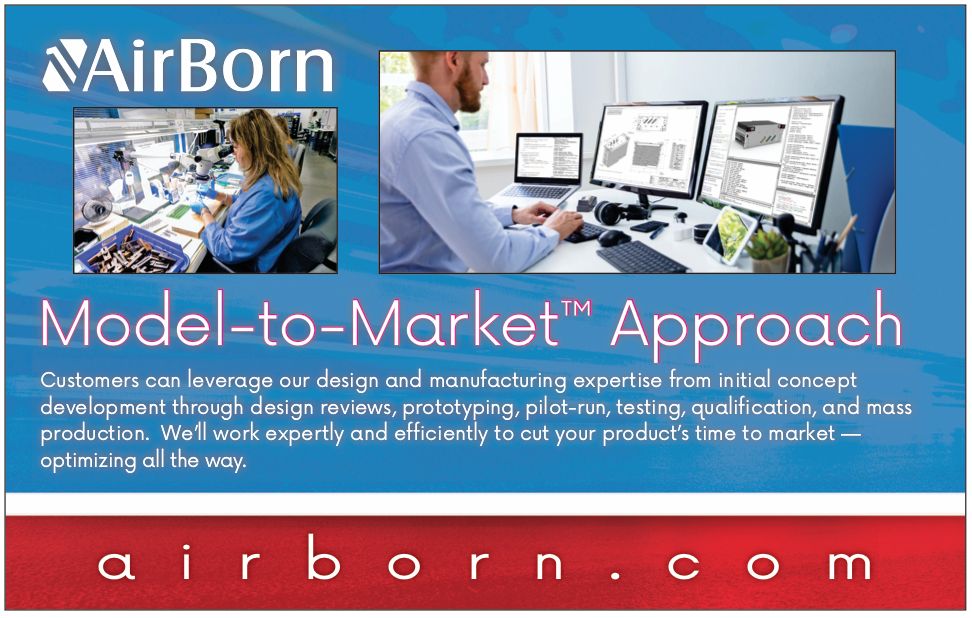 IoT Communication Trends: Private Networks and Edge Computing IoT implementations are already challenging the traditional approach to storing, transporting and analyzing data in the cloud. In many cases, the paradigm of transporting all the data to the cloud for processing it is becoming unsustainable.

Two significant trends are emerging that enable local processing of data and driving the expansion of IoT applications: the surge in private wireless networks and the use of edge computing.

A private network can work in either licensed or unlicensed spectrum and provide dedicated connectivity, optimized services and a secure means of communication within a defined area (for example, an industrial campus, ports, mining sites, farms, etc.) Private 4G/LTE and even more so private 5G networks can deliver the speed, latency and other benefits to support multiple use cases.

Edge computing allows network users to capture, store, process, and analyze data closer to the sensors where the data is generated, instead of in more remote cloud data centers; only relevant data is transported from the edge of the network to the cloud for further analysis. For example, the system will trigger alarms and send relevant data for analysis only when detecting data anomalies or important deteriorations trends. Furthermore, analyzing data close to the source makes it easier to act on the results quickly, avoiding the latency penalties involved and the costs of sending large amounts of data to the cloud. 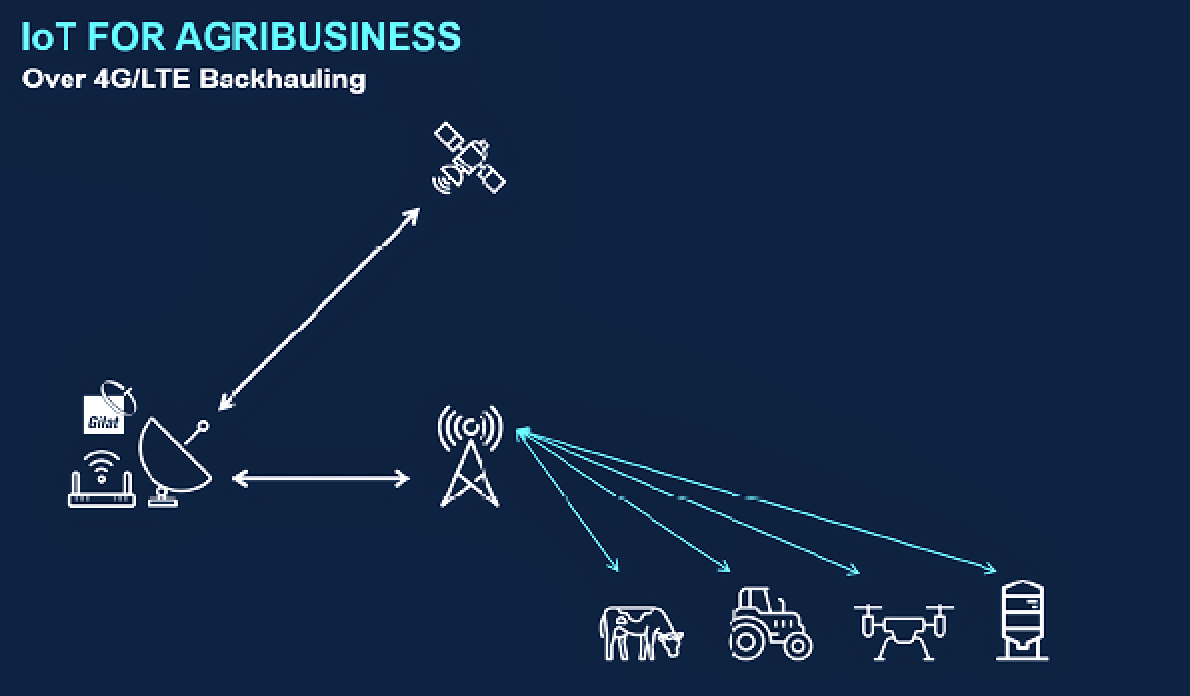 Figure 3. Image is courtesy of Gilat.

Here’s an example: a merchant ship loaded with many climate-controlled refrigerated containers moves throughout the ocean. Each of these containers is equipped with a controller connected to a Narrowband IoT transmitter and antennae. When the ship is close to a port, each container can transmit its data through the terrestrial NB-IoT network. However, when the ship is too far from shore to access the terrestrial network, the only way to transmit business-critical information is via satellite. There are two possible ways to configure the network:
have the hundreds or even thousands of containers be connected directly to NB-IoT-enabled LEO or GEO satellites, or to connect them to an in-ship private network, from where a centralized satellite connection is established.

In some cases, the connectivity setup will include a terrestrial link in addition to the satellite connection, although it might be unreliable or insufficient in terms of bandwidth or provided QoS. In this case, a software defined network (SDN) can be implemented where both the existing terrestrial and satellite connections are used in an optimally combined fashion.

The decision to use either one of them can be triggered by parameters such as reliability, latency, throughput, jitter, and more. This setup can be easily accomplished from a local aggregation point where the SDN logic can be initiated and reside in an edge-enabled VSAT or be integrated with it.

Implementation of SDN capabilities can be key in disaster-prone areas where the terrestrial communication can falter and where sensor data, like environmental parameters, can be critical to activities like containment and remediation.

Figure 4. Image is courtesy of Gilat.

Many IoT sensors, such as those found in IWSN (Industrial Wireless Sensor Networks), require periodic software, firmware or configuration updates. A central edge can be used for caching content multicasted from satellites that can then be internally distributed to the respective sensors and systems through private networks.

Focus On Analytics and Context

In many cases, the value provided by a single sensor is not enough. A lot of IoT data is contextual and its impact can only be truly understood in relation to additional parameters that can originate in other sensors or specific databases.

This contextual analysis can be done in the cloud; but if local analytics, privacy concerns and fast responses are determining factors, then best practices indicate that this analysis should be conducted in local edge computing centers.

There are many examples of when this is needed, including: high levels of hazardous air pollutant data that needs to be combined with wind and other data to understand their dispersion patterns; portable health sensor data (think COVID tracking) that is highly contextual and its measurements can be interpreted differently according to other sensor measurements and background data such as medical history (pre-existing conditions, medications, prior procedures), weather, time of day, activity levels, etc.

As the number and variety of sensor data increases, the need for local contextual analytics also increases. Beyond context, local analytics enables management by exceptions, which provides the ability to react in a focused fashion to specific events, outliers or trends.

A classic example of this approach can be found in video analytics: instead of sending huge volumes of raw data to the cloud, video analytics can be done locally and only send alarms to the cloud when, for instance, an intruder is identified in or approaching a restricted area. This approach has multiple benefits beyond drastically reducing the amount of data transmitted — it enables focusing on the most important events and react in a timely and even proactive way.

Riding the Wave of Innovation

A tidal wave of innovation is currently taking place: 5G with its IoT-related families of use cases (Medical Internet of Things — mIOT / Ultra-Reliable Low-Latency Communication — uRLLC / Research Electronic Data Capture — REDCAP, etc.), private networks which are providing reliable and cost effective communications to factory campuses, mines, ports, off-shore platforms and many other sites, MEC (Multi-Access Edge computing) which is enabling drastic reductions in backhaul costs and congestion, enhanced privacy, effective local analytics and more. On top of this, integration with satellite can bring all this innovation together to many unserved or underserved locations around the world. 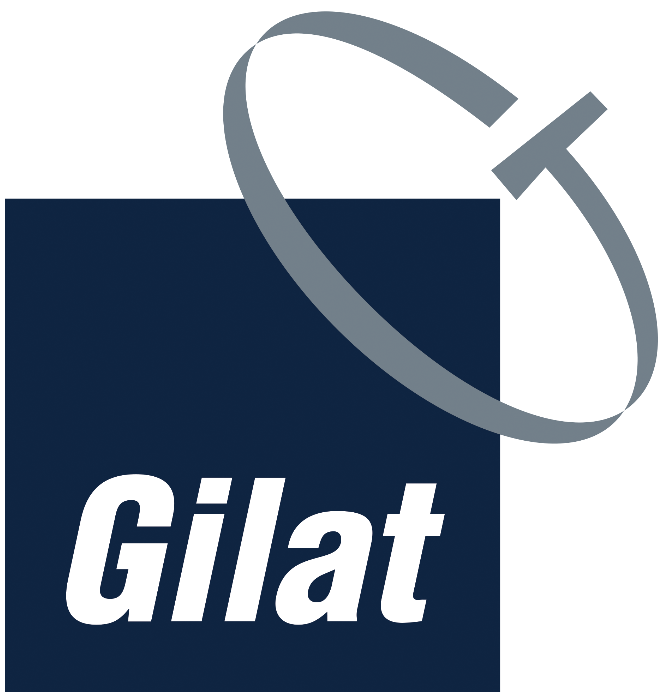 By integrating satellite communications with private networks and edge computing, businesses all over the world, regardless of their geographic location, can have access to the powerful information needed to be successful in the 21st century. Gilat has been and continues to be in the forefront of satellite innovation, enhancing our solutions with the added value of analytics, edge computing and private networks.
www.gilat.com

Daniel Itzigsohn is a Senior Product Manager at Gilat Satellite Networks, responsible for the 5G and IOT products and solutions within the company.

Daniel is a consummate veteran of the Telecommunications world, with more than 20 years of experience and a broad formation in multiple areas, such as OSS, BSS, Analytics, Satellite Communications and Remote Sensing, network optimization, 5G, IOT and more.

For the past 4 years, Daniel has been dedicated to studying and building different solutions in the areas of 5G and IOT, interacting in these areas with some of the largest service providers, integrators, standard organizations and vendors. Daniel holds a BSC in Physics and Mathematics from the Hebrew University in Additionally, Daniel has been a key presenter in multiple events and the solution architect of multiple technological solutions and POCs with partners and service providers.