SatMagazine (SM)
Good day, Mr. Goerner. You have been involved in the semiconductor and embedded systems environment for many years with several leading firms… what drew you to Microsemi?

Rick Goerner
When I came to Microsemi in early 2011, the company had just closed the acquisition of a field programmable gate array (FPGA) company, expanding its product offerings to include FPGAs and system-on-chip (SoC) solutions. It was clear to me Microsemi embarked on a course to reinvent itself. This strategic move expanded the company’s ability to position itself in other key markets such as communications, industrial, security and, especially, space.

Microsemi has a strong, experienced management team and an aggressive growth model to outpace the semiconductor industry’s growth rate. We are accomplishing this through organic progression, such as internal research and development project funding, as well as via the strategic acquisition of new products and technologies. In fact, Microsemi has completed nearly $1 billion in acquisitions just since I joined the company.

During my career, I have been on both sides of the integration process post-acquisition—as the company bought and as the company buying—and feel I have something to “bring to the party” during these essential integrations.

Lastly, the sales positioning with key OEM customers and global and regional channel partners represented a significant challenge for me, as I had to create a channel structure capable of supporting Microsemi’s aggressive growth plans and align it with the company’s unique and strategic acquisition process.

SM
With your 40+ year career, what project or projects truly bring a sense of satisfaction to you?

Rick Goerner
Seeing business plans come to fruition is always gratifying. With that said, recognizing our company’s success in “public-eye” programs is particularly satisfying. As a recent example of this, Microsemi’s space solutions are onboard NASA’s New Horizons spacecraft supporting its successful exploration mission to Pluto.

The high-reliability Microsemi products on the spacecraft include electronic content used in imaging cameras to transmit stunning images of Jupiter and Pluto back to Earth, as well as in the communications systems and other avionics and payload systems. 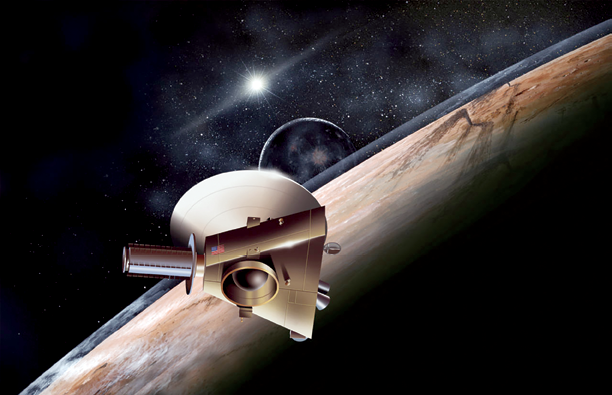 SM
The role of silicon in the success of space missions is often overlooked by the general SATCOM industry... until the time arrives to build craft and operating environments and, suddenly, the role of space tolerant semiconductors becomes totally relevant. How does Microsemi make its presence known to current and potential clients as to the silicon necessities?

Rick Goerner
Microsemi has a strong leadership position in space electronics from both a product breadth and revenue perspective, and also has broad recognition in this market segment with our more than 55 year commitment to the space industry. Microsemi is one of the few suppliers actively defining product roadmaps to address the unique, and certainly challenging, environmental needs of space applications.

Microsemi is constantly addressing the space industry’s ever-evolving needs for decreased size, weight and power (SWaP) with higher levels of integration and radiation-tolerant (RT) performance in FPGAs, ASICs and ASSPs, hybrids, JANS-level discretes, isolated DC-DC converters and space grade oscillators. By working closely with our customers and partners, Microsemi is able to develop the most in-demand solutions addressing the most difficult challenges in the industry.

Microsemi conducts Space Forums in key markets to ensure key customers are aware of, and have early access to, our next generation technology solutions. We recently completed a global Space Forum series in North America, Europe and India which attracted more than 500 attendees.

SM
What are some of the biggest changes you’ve seen in the space business over the years?

Rick Goerner
A major development in space electronics over the past two decades has been the adoption of FPGAs, initially in command, control and interfacing functions, and more recently in high speed signal processing applications. RTG4 is an incremental step along this path as it provides programmable high speed signal processing capability without sacrificing radiation tolerance.

SM
Any predictions for the space business?

Satellite developers are also facing increasing pressure to develop systems faster and at lower cost. Product innovations from semiconductor suppliers can dramatically shorten development times for satellites, and in addition significantly reduce cost, and save weight and power. For example, Microsemi’s LX7730 Telemetry System Manager provides acquisition and control of up to 64 telemetry channels, integrating an entire I/O card into a single 132-pin CQFP package.

The space environment is very unforgiving with measures protecting against radiation effects top of mind for developers. What technology advancements have you seen in recent years that are helping to ensure satellites and other space applications function properly while in orbit? 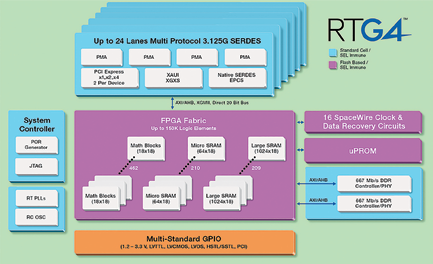 While advancing processing technologies are good news for total dose effects, they are bad news for single event upsets (SEUs) and transients. SEUs are instantaneous upsets and transients caused by high energy sub-atomic particles in space. This form of radiation can cause storage elements (flip-flops, SRAM cells) to erroneously change state. Sub-atomic particles can also cause combinatorial logic to glitch, which becomes problematic if the glitch occurs within the set-up and hold time window of a downstream flip-flop. Modern integrated circuits such as Microsemi’s RTG4 FPGAs have design features which mitigate single event upsets and single event transients.

SM
Would you explain more about the RTG4 radiation-tolerant FPGA and application in the space market? What advantages does the RTG4 provide compared to other FPGAs?

Rick Goerner
The RTG4 addresses the growing need for high-performance signal processing requirements of complex instruments and systems in satellites and other space vehicles as demand for images, scientific data and other information increases. Unfortunately, downlink bandwidth is not growing fast enough to satisfy demand for this information. The limited downlink bandwidth must be used for processed information rather than raw data, so satellites must perform more processing in space using high-density, high-performance payload processing electronics.

Solutions such as Microsemi’s RTG4 FPGAs enable designers to achieve high rates of signal processing without sacrificing radiation hardness. Our FPGAs are more flexible than radiation-hardened ASICS, have more signal processing features than any other radiation-tolerant FPGA, and have complete immunity to configuration upsets.

Rick Goerner
Microsemi has been developing space solutions for almost six decades and has played an important role in a wide variety of space programs globally. The company has a proven track record for innovation, quality and reliability, and continues to build on that legacy with an impressive portfolio of industry-leading new product and technology introductions.

Microsemi’s high-reliability products and solutions have been used in applications that require high levels of radiation hardness for trips to the moon, Mars and beyond. Microsemi has always responded to the specific needs of space applications and has a long standing commitment to the space market.

Microsemi’s heritage in space started with the Atlas launch vehicles in 1957. The first space flight using Microsemi FPGAs was in 1991 using an 883B military part. Then in 1992 we sold our first parts with production screening specifically intended to meet the needs of space customers. This was to support the GOES-2000, SILEX and Cassini missions.

The first parts with deliberate radiation hardening (in this case, hardening by process) were available in 1996. The current generation of RT FPGAs (hardening by design) started with the introduction of the RTSX-SU FGPAs in 2004. Since then we have been on multiple space projects with our RT FGPAs, such as the Mars Reconnaissance Orbiter with an RTSX-SU in 2005 as well as the Curiosity Rover in 2011 with RTAX™ and RTSX-SU FPGAs. Currently we have over 80 percent of the space FPGA market.

We are committed to supporting our products throughout the lifetime of our customer programs. We continue to innovate in areas such as semiconductor materials, advanced packaging technologies and high density integrated circuits. Our products are qualified to the highest government, DLA, NASA and ESA standards, and their reliability has been independently verified by multiple agencies.

As our customer’s supply partner for electronic systems in space, Microsemi can solve problems at all stages of design and implementation, including power conversion and distribution, radio and radar signal processing, system telemetry and control, digital logic integration, and semiconductor packaging.

SM
Accurate timing plays a critical role for satellites when communicating with the ground station. How do you ensure timing accuracy when a satellite is in orbit?

Rick Goerner
Accuracy on-orbit is established using crystal oscillators or in some cases atomic clocks. These devices are controlled by the ground stations and adjusted to a system or Universal Time Coordinated (UTC) timescale.

The best examples of on-orbit timing are the Global Navigation System Satellites (GNSS), in particular the US GPS system. GPS satellites have onboard Cesium or Rubidium atomic clocks which are adjusted from the ground to be as close to the US Naval Observatory’s time scale as possible. By using the highly accurate clocks in orbit, GPS users can establish their time and position.

Microsemi delivered the first production atomic clocks for the GPS program and continues to provide its Ultra-Stable Oscillator for the future GPS III satellites. The GPS satellites have revolutionized many aspects of our lives. Microsemi is now developing clocks that can be steered on-board by GPS receivers, reducing or eliminating the requirements for ground station support. Microsemi has an extensive legacy of crystal oscillators and atomic clocks for space for numerous scientific, commercial and military missions.

SM
What can we expect to see being developed and arriving from Microsemi over the next few quarters?

Rick Goerner
Microsemi continues to develop the most innovative space-related products, capabilities, and technology to combat the effects of radiation. Expect to see new developments with our rad-tolerant FPGAs and controllers, and products that provide accurate frequency and time required for timing, radar and communication functions.
www.microsemi.com/