For fixed satellite networks that operate in alpine locations and areas subject to winter snow and ice, it is essential to have an Earth station antenna De-Icing system to prevent downtime and signal degradation due to snow and ice buildup on the antenna and feed.

Antenna De-Icing systems and products from leading manufacturers such as W.B. Walton Enterprises, Inc. (known as Walton De-Ice) have evolved along with the earth station industry over the past four decades, offering increasing reliability, ease-of-use, operational and energy efficiency. These products have proven effective around the globe in protecting uptime for critical business and government ground network sites.

With the proliferation of Direct-to-Home (DTH) satellites, a number of consumer-grade solutions for mitigating snow and ice outages on receive-only dishes have been marketed to home users. These anti-icing products can employ techniques such as hydrophobic covers to shed snow, as well as electrically heated Pads, and even Infrared heaters to warm antennas. 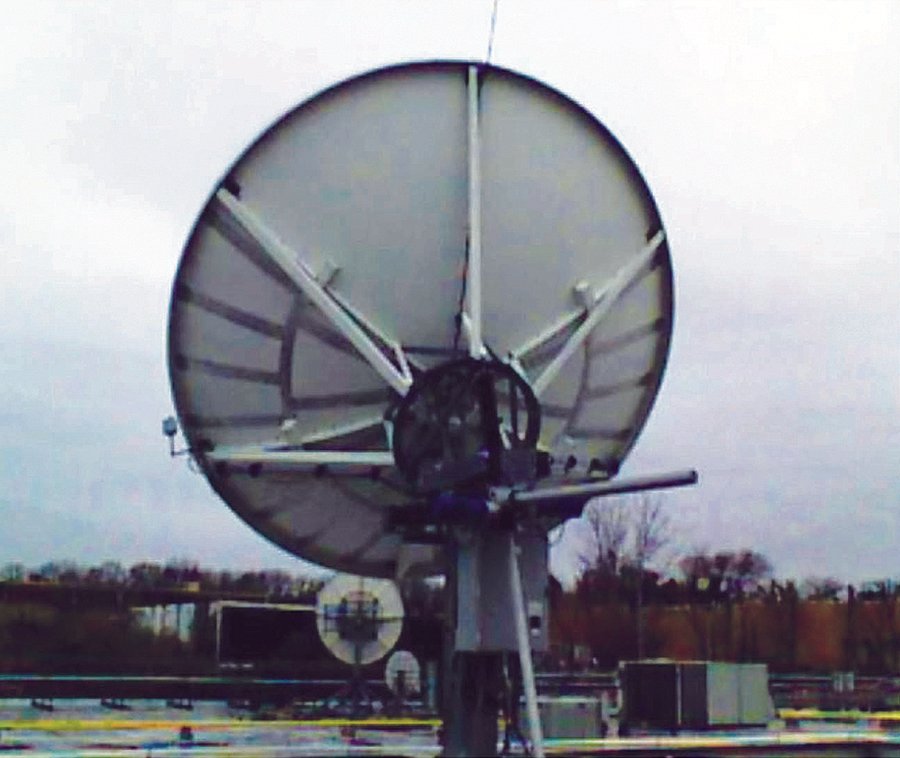 Consumer-grade anti-icing systems try to combat the problem of antenna ice on small and receive only dishes with varying degrees of effectiveness. Unfortunately, some of these consumer-grade products, sometimes known as “Surface Heating” systems or “Heat Pad” heating systems, have been marketed for professional earth station antenna anti-icing. This is despite the fact that they can actually harm professional two-way satellite networks.

This article explains how and why Surface Heating / Heat Pad and Infrared Heater methods create unnecessary problems, and how Hot-Air De-Icing methods avoid these issues.

Surface / Pad Heating
With surface heating / pad heating type systems, a heater is attached to the back of the antenna reflector to project heat through the rear of the reflector, as shown in Photo 1 to the left.

Figure 1 shows a thermal image of the rear of the same antenna while a Surface Heating / Heat Pad system is activated. The different colors at different spots on the reflector surfaces (e.g., Sp1, Sp2, Sp3, etc.) show their different temperatures. The vertical color spectrum / legend on the right of the image shows that the temperatures in the image range from 20° to 60.1°F.

Table 1 shows temperature measurements for six spots on the antenna rear. For example, Spot 6 (Sp6) is 44.4°F, while spot 2 is 69.3°F, a difference of nearly 25°F, just a few feet away on a 3.7m dish. The image shows that the bottom of center area of the antenna rear is warm next to the surface heater insulation, while around 25 percent of the surface at the top is around 20°F colder.

Table 1 clearly shows the tremendous amount of heat energy wasted out of the back of the reflector. 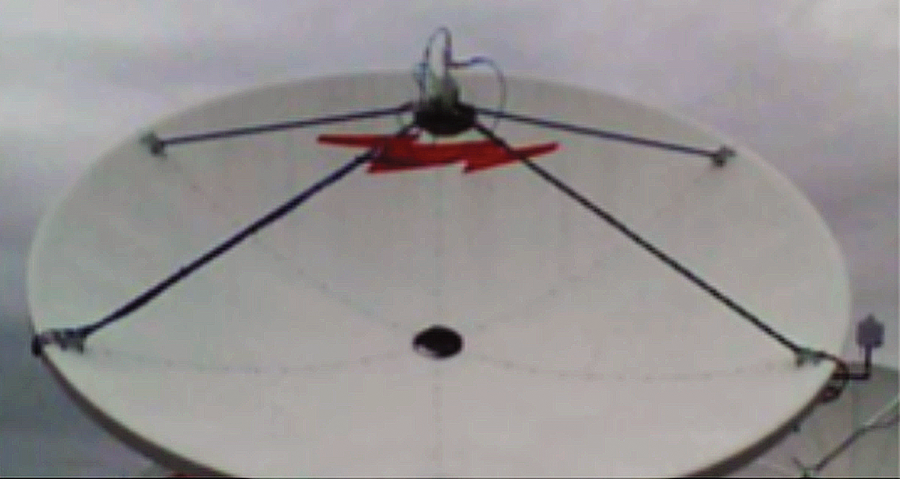 Photo 2. Front view of an antenna. 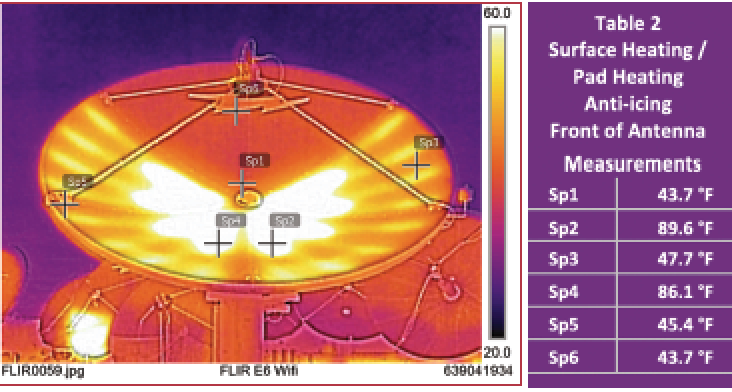 Photo 2 shows the antenna front view. Figure 2 is a thermal image of the front of the same dish taken around the same time with Surface/Pad heating active.

Surface / Pad Heating: Completely Uncontrolled Thermal Footprint
Figure 2 is a perfect illustration of how surface/pad heating system have a completely uncontrolled thermal footprint. This causes reflector distortion and gain losses that many operators complain about. It also shows why you should only use a de-icing system that will uniformly heat the entire reflector surface.

Non-Uniform Surface Heating Causes Distortion Losses
Large surface temperature differences such as the above example cause metal elements in a reflector to contract at different rates, which distorts the reflector shape. The huge variations antenna surface temperatures caused by Surface Heating / Pad Heating anti-icing products cause reflector distortion and antenna de-focusing. As a result, antenna performance can fall below minimum required standards. Off-axis antenna transmissions due to antenna off-pointing and/or distortion losses can even cause in interference on the satellite, outages, and penalties from a satellite operator.

Another Surface/PAD Heating Problem
Surface heating / Pad heating systems are commonly attached by an adhesive applied rear of an antenna. The perimeter is taped with aluminum HVAC tape. Unfortunately, this does not work very long, given that outdoor moisture and temperature conditions can be harsh.

Unlike surface/ pad heating products, a Walton Hot-Air system, for example, mechanically fastens (screw or bolt on to) a Plenum to the back structure of the reflector. The Plenum is a breakdown-free hot-air enclosure with no mechanical parts that has been field-proven to last for decades around the globe.

This is due to the poor insulation with Surface heating / Pad heating systems, as a large percent of the heat can escape from behind the Pad insulation. That impedes efficient heating of the front of the reflector, where snow and ice accumulate and is a huge waste of energy.

For example, compare the same spots in the Front and Rear Thermal Images (Figures 1 and 2). Sp2 and Sp4 in the center of the dish are around 19-20 degrees. This temperature difference represents heat and energy lost out of the back of the reflector.

Figure 3 shows a thermal image of the same 8 meter antenna shown in Photo 3. The thermal image was taken as eight (8) residential grade Infrared Heaters were placed inside the antenna’s rear enclosure structure and activated in a make-shift attempt to perform anti-icing. 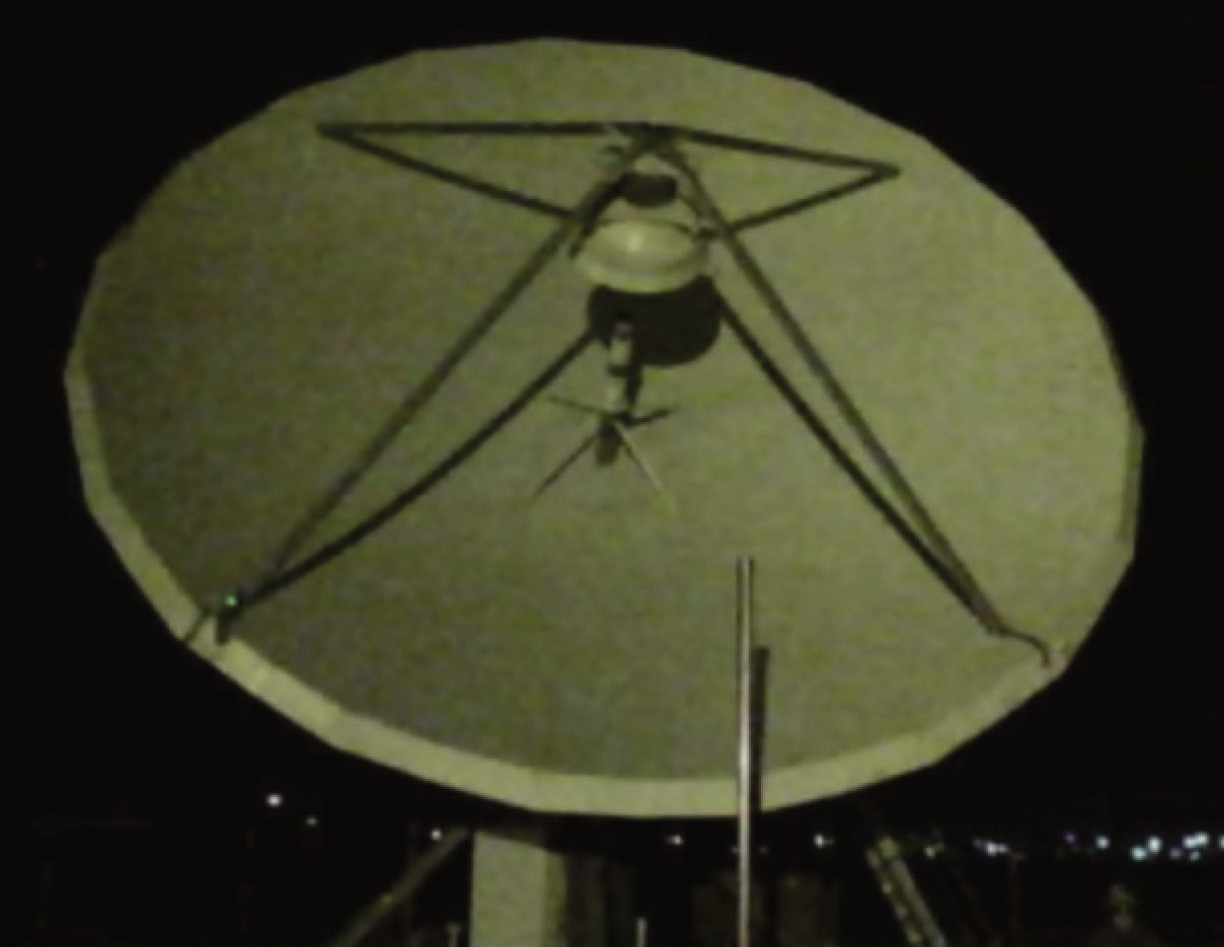 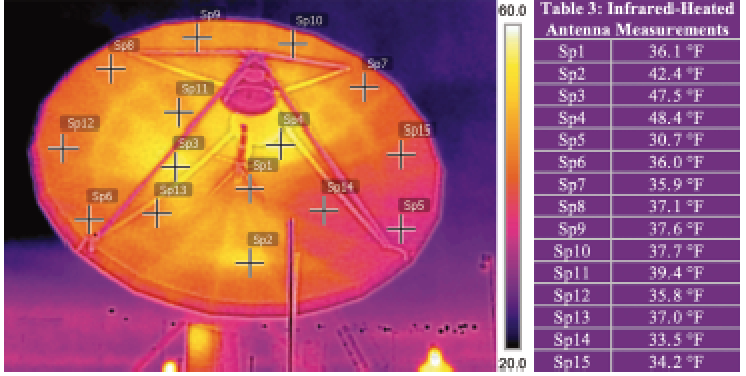 The temperatures of different spots on the Infrared-Heated Dish in Figure 3 correspond to their colors in the thermal image. The vertical color spectrum / legend on the right of the image shows the range of temperatures from 20 °F to 60 °F. Table 3 on the previous page hows temperature measurements at 12 spots (Sp1, Sp2…Sp12) on the antenna reflector. For example, Spot 4 (Sp4) is 48.4 °F, while spot 5 (Sp5) is 30.7 °F, below freezing.

The difference between the coldest and warmest two spots is nearly 18°F. This large variation in surface temperatures causes a reflector’s metal components to contract unevenly, de-focusing the antenna.

As previously discussed, off-axis antenna transmissions could even result in interference to a satellite, outages, and penalties. This shows why such an Infrared-heated solution, when attempted, has caused problems and complaints, and why it should not be used for Ku-Band antennas, let alone Ka-band antennas, which require more accurate beam pointing.

The Hot-Air De-Icing Approach
If direct Surface Heating or Pad heating, or make-shift Infrared (IR) heater approaches are problematic, what approach has been successful? The answer is a hot-air de-icing solution, such as a Walton De-Ice system.

With Walton Hot-Air De-Icing systems, a Plenum (enclosure) is attached to the rear of an antenna. Energy-efficient industrial forced-air heating systems then circulate hot air within the Plenum, thereby creating uniform surface temperatures on the reflector.

Walton Hot-Air De-Icing systems maximize antenna performance, while preventing ice and snow buildup. These systems ensure that the differences in temperatures between spots on the reflector surface area are kept to within about a 5°F delta.

For example, Figure 4 is a Thermal Image of an 8 meter antenna with a Walton Hot-Air Plenum De-Icing system in operation. Table 4. to the right, shows corresponding spot measurements. 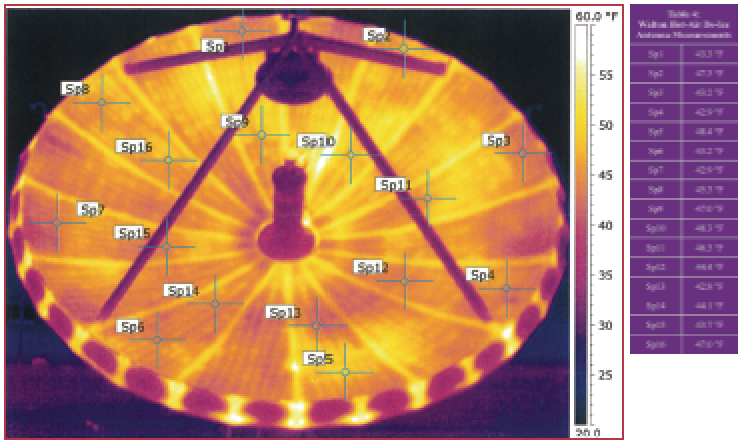 Figure 4. Heat is uniformly distributed, and reflector surface temperature spot differences are within about 5° F of each other.

These tolerances have proven widely acceptable in the industry, with field-proven installations for thousands of Walton Hot-Air De-Ice systems, including over five hundred large Ka-band large dish sites with operators around the globe.

The Bottom Line
By examining thermal images and surface temperature data on satellite Earth station antennas, the company has seen that Surface Heating systems or Heat Pad system can unnecessarily put operations at risk of signal degradation and losses, while failing to effectively de-ice antennas.

Reflector distortion from inferior anti-icing products can cause off-axis antenna pointing, and even cause interference to a satellite network, creating risk of outages and penalties. In addition, attempting to use consumer-grade Infrared (IR) heaters as a make-shift heater substitute for an industrial strength heater is unlikely to de-ice effectively.

Furthermore, it is not integrated with automated control and wastes energy.

Another major problem with Surface / Pad Heating anti-ice systems is that they only heat the reflector to combat ice. They do not address warm weather distortion loss challenges.

They provide no method for maintaining uniform surface temperatures during non-icy conditions, such as during hot weather when sun spots and shadows can unevenly heat and thereby distort metal reflectors.

This deficiency is especially troublesome with Ka-Band antennas, where distortion must be minimized and pointing accuracy maximized 365 days a year.

In contrast, Walton’s system uses temperature probes to continuously monitor quadrants of the reflector surface. It then circulates air inside the Plenum in order to ensure that the reflector maintains an even temperature balance.

Walton systems with Temperature Balance Control maintain uniform temperatures during winter precipitation as well as summer sun heat, regardless of the weather 24/7/365. Surface Heating / Pad Heating systems do not.

David Walton is the Vice President and Ray Powers is the Director of Marketing for W.B. Walton Enterprises, Inc.

Daniel Freyer is Managing Partner of AdWavez Marketing LLC, a marketing agency specializing in the satellite industry. AdWavez helps companies, such as Walton De-Ice, build and grow their brands and markets.

W.B. Walton Enterprises, Inc. designs and manufactures the highest performance line of De-Ice equipment available for satellite Earth station antennas, as well as other unique and patented weather protection solutions for antennas of all sizes.