Parks and other urban green spaces used to have two simple functions: to please the eye and to provide a place to relax. However, changing lifestyles, population growth, overcrowding and climate change call for a radically new approach to urban green space management. Today, parks and lakes are an important extension of urban life. 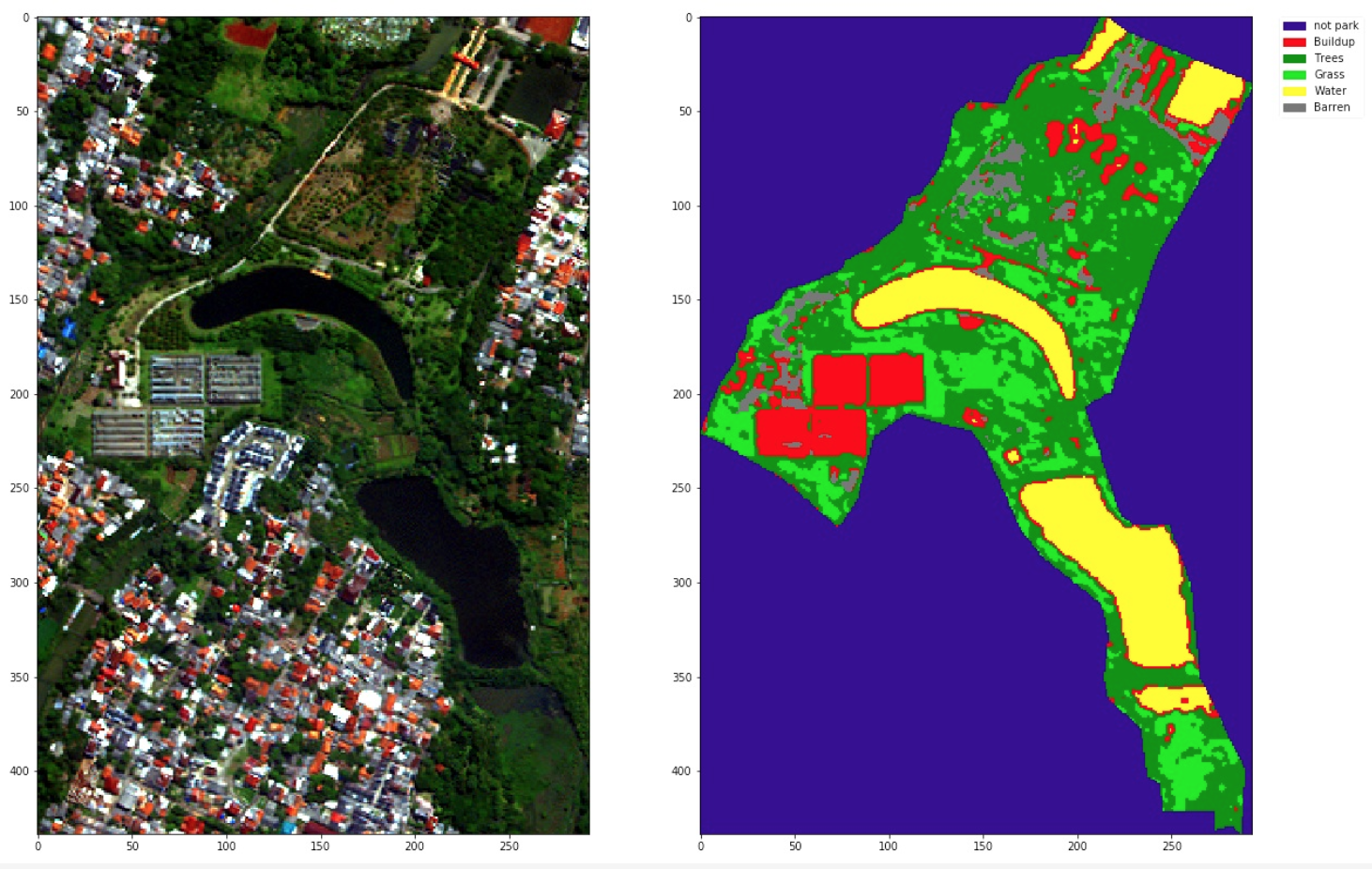 Despite the importance to our quality of life, urban green spaces are routinely consumed by lucrative development. A lack of comprehensive and updated data remains a bottleneck for mainstreaming ecological considerations in sustainable urban development. Data gaps are often attributed to the high costs and time-consuming nature of land-based surveying. Without actionable insights into the current state of urban ecosystems, governments and policymakers remain powerless to make the right decisions and improve livability in cities while protecting green and blue spaces.

Collaborating with the World Bank in Indonesia 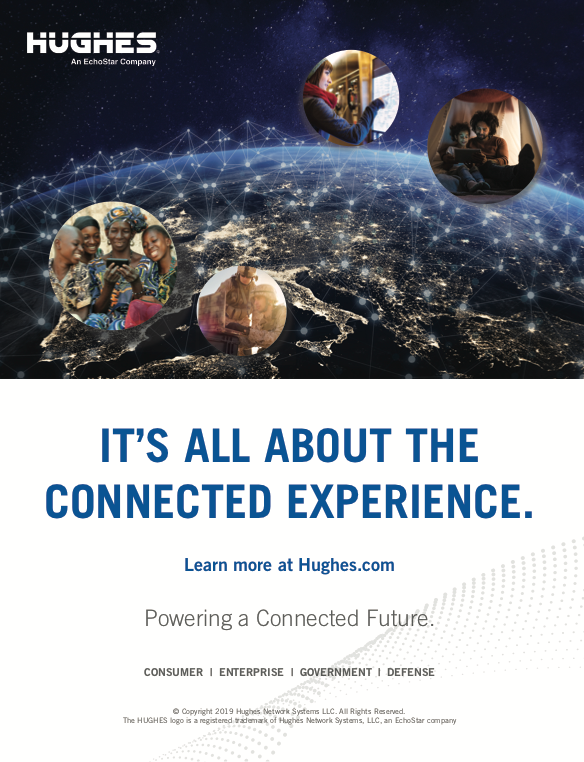 Green City Watch’s method of mapping the quality of urban green space was showcased at a World Bank-hosted event, where we met the World Bank’s Geospatial Operations Support Team (GOST), which helps operational teams apply geospatial technology to development problems. Facilitated by GOST, we were honored to collaborate with the World Bank’s City Planning Labs (CPL) team, whose mandate is to enhance evidence-driven urban planning in Indonesia.

To establish a proof of concept, we analyzed 26 of Indonesia’s most populated cities, including Jakarta, a ‘megacity’ and the largest city in Southeast Asia, with an estimated population of over 10 million people. Jakarta is set to surpass Tokyo as the world’s largest city with 35.6 million people by 2030.

Although Indonesia has some ways to go in terms of expanding its urban green space, quantity was not the only thing that the World Bank’s CPL team was concerned about. In addition to mapping the geographical extent and locations of the green space, our proof of concept also measured the park’s infiltration capacity (the maximum rate at which soils can absorb rainfall), ratio of permeable versus impermeable land (where water can percolate into the soil to filter out pollutants and recharge the water table versus where it’s blocked by concrete, buildings or other materials), the number of trees within the parks, the availability of amenities and recreational facilities. The latter leveraged crowdsourced data from the OpenStreetMap (OSM) initiative.

For example, in Jakarta, Green City Watch calculated these statistics using our algorithms on Maxar’s imagery in GBDX:

• Parks cover 825 hectares
• 43 parks over 2 hectares in size
• Over 300 hectares of trees, 90 hectares of grass and 20 hectares of water within parks
• 225 hectares of high-quality green space, according to the Green City Watch index
• Monas Park, one of the biggest city parks in Asia, has 8 public toilets, 6 sport pitches and 5 historic monuments 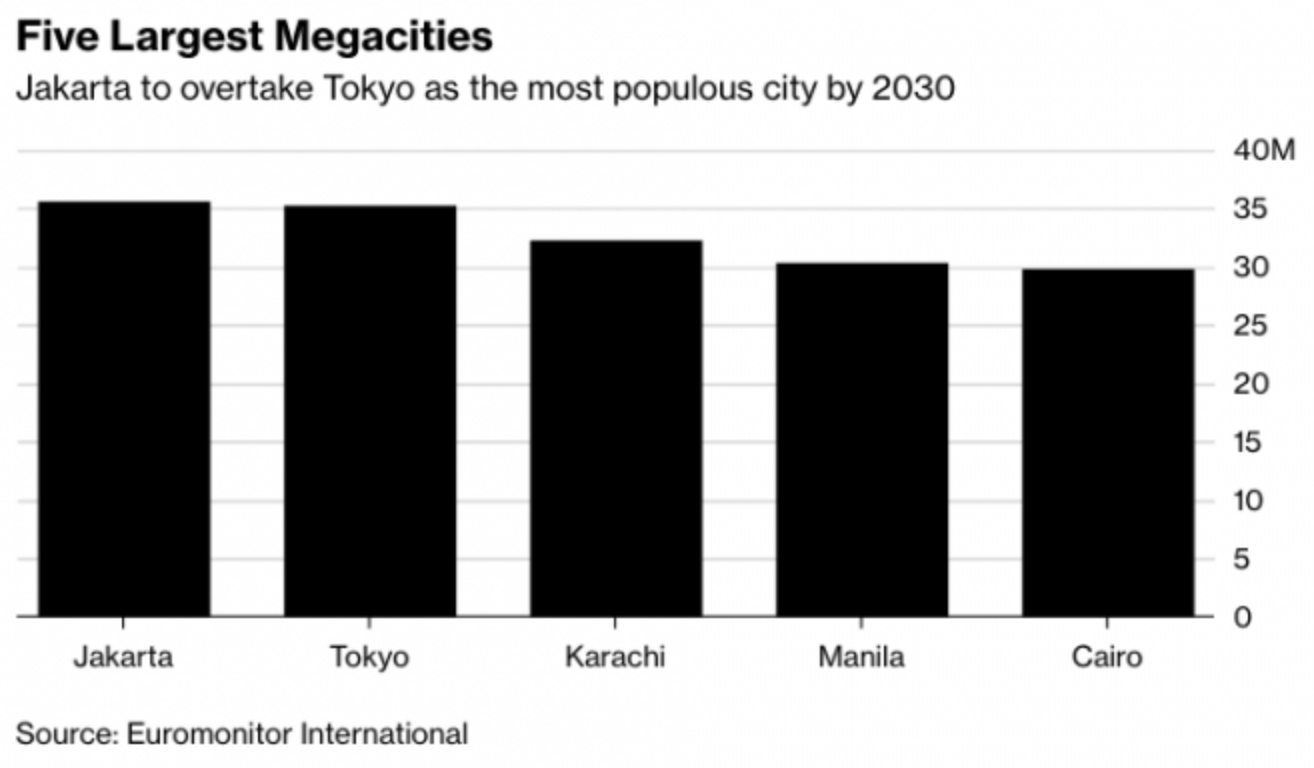 Tokyo will lose the crown of being the world’s most populous city to Jakarta by 2030. Source: Euromonitor International

Most recently, the CPL team has won the World Bank’s “Disruptive Technologies for Development (DT4D)” Challenge Award for their proposal to work collaboratively with Green City Watch to develop a “Green and Blue Footprint Tool” that builds upon the initial green area mapping proof of concept in Indonesia and extends it to include water bodies, in addition to taking it to scale to create a global public good.

But GBDX goes beyond imagery. For our analysis we used the GBDX Catalog service to automatically filter out the best possible image, which enabled us to automate our workflow. We also used the GBDX vector services alongside overpass API to extract OpenStreetMap polygons and points of interest. This helped us identify amenities, which have been mapped out by local communities. 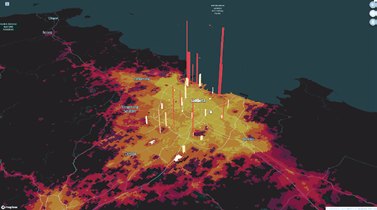 Since winning the GBDX for Sustainability Challenge in mid-2018, we have been developing our #UrbanGreenprints, or baseline assessment, about the quality of a city’s green spaces — while simultaneously producing an effective monitoring tool for cities to track the progress of these spaces, old and new.

Using Maxar’s high-resolution satellite imagery allows us to analyze any city’s parks and forests, anytime. The imagery coverage is global, and in most places, updated monthly — or even weekly. High-resolution imagery is warranted yet underutilized in green space management. Imagery-based approaches can be used to monitor and evaluate urban forest loss and conversion and better understand city dynamics spatially.

Green City Watch is on a mission to renature cities as quickly as possible, and in turn spreading the message that by planting trees, protecting public nature reserves and restoring the ecosystems that underpin cities, the welfare of its inhabitants —and (in a small way) the planet they live on —could be radically transformed for the better.

Editor’s note
Green City Watch’s new approach to urban green space management won first place in the Maxar and Amazon Web Services’ GBDX for Sustainability Challenge out of 70+ submissions. The challenge gave finalist teams access to Maxar’s Geospatial Big Data platform (GBDX) and its 100+ petabyte optical imagery library to develop a machine learning solution for one of the United Nations’ Sustainable Development Goals/ This article is republished from the Maxar Blog with permission of the company.
www.maxar.com

Nadine Galle is a PhD Candidate in Ecological Engineering and Co-Founder and CEO of Green City Watch, the award-winning geoAI platform for monitoring urban nature. Her recent work includes defining the “Internet of Nature” in her TEDx Talk, co-developing #UrbanNatureAmsterdam, and founding the world’s first intensive summer course on ‘circular cities’, for which she still serves as Academic Director.