At last we know ­— on July 12, the FCC Commissioners (via a 4 to 0 vote) backed the proposal by Intelsat and SES (with Intel) to see a restructuring of C-band spectrum over the U.S. to help develop 5G — the firms wish this to occur rapidly and might even extend the concept from an initial 100 MHz to 200 or even 300 MHz. 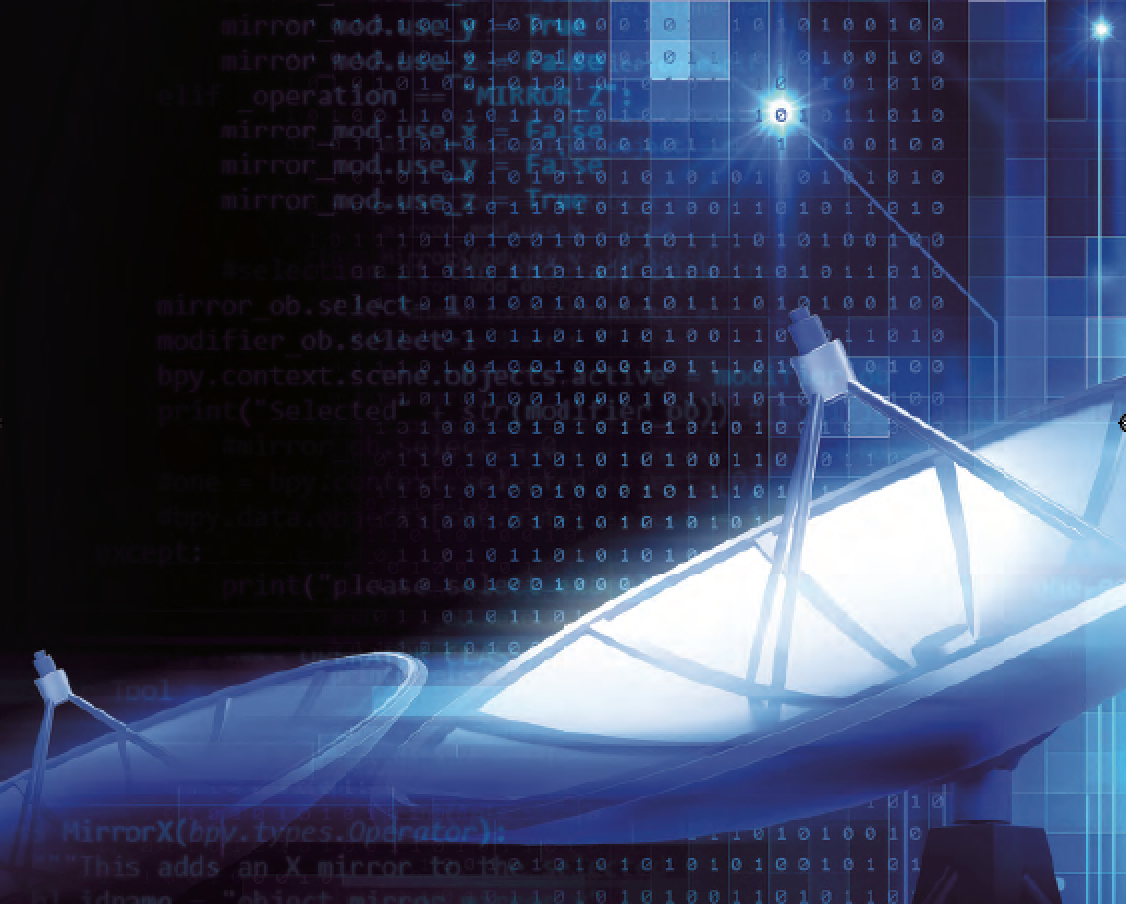 The plan would see Intelsat, SES (and including Eutelsat) sell some of their C-band frequencies to the USA’s cellular operators. However, the FCC enthusiasm needs another vote to finalize the decision, and that vote has yet to be scheduled, as of this writing.

Intelsat and SES, which between them control more than 90 percent of the spectrum under discussion, have benefited from investor enthusiasm for their proposals. Intelsat shares rose 14 percent on July 12 (to $19.78) to a four year ‘high.’ SES also benefited (by 5.2 percent to 17.06 euros).

“We’re going to need a bigger boat,” said FCC chairman Ajit Pai, in his comments and referencing the Hollywood movie ‘Jaws.’ “In our case,
more spectrum.”

SES, in a statement, said, “The FCC adopted an Order and Notice of Proposed Rulemaking (NPRM) related to the prospective use of the 3,700 – 4,200 MHz spectrum today. We are pleased with the emphasis on the protection of incumbent users from harmful interference and the positioning of our market-based solution as a lead proposal.

“We thank the Commission for the hard work on how to implement our market-based and expedient approach to resolve the challenging regulatory issues confronting the FCC. The FCC’s level of interest in our proposal supports our firm belief that it will produce multiple benefits for industry growth and investment and best align incentives to ensure a win-win solution for all stakeholders, as well as the broader public interest. An industry-based solution developed by those who have invested heavily in C-band is essential to avoid disruption of national video and audio broadcasts, emergency services, and military applications in the U.S. that all depend entirely on continued access to C-band. The satellite operators – Intelsat and SES, today joined by Eutelsat – will work hard to demonstrate our ability to efficiently implement our market-based proposal, protecting the C-band services environment from disruptive interference while clearing spectrum to accelerate the era of 5G in the U.S.” 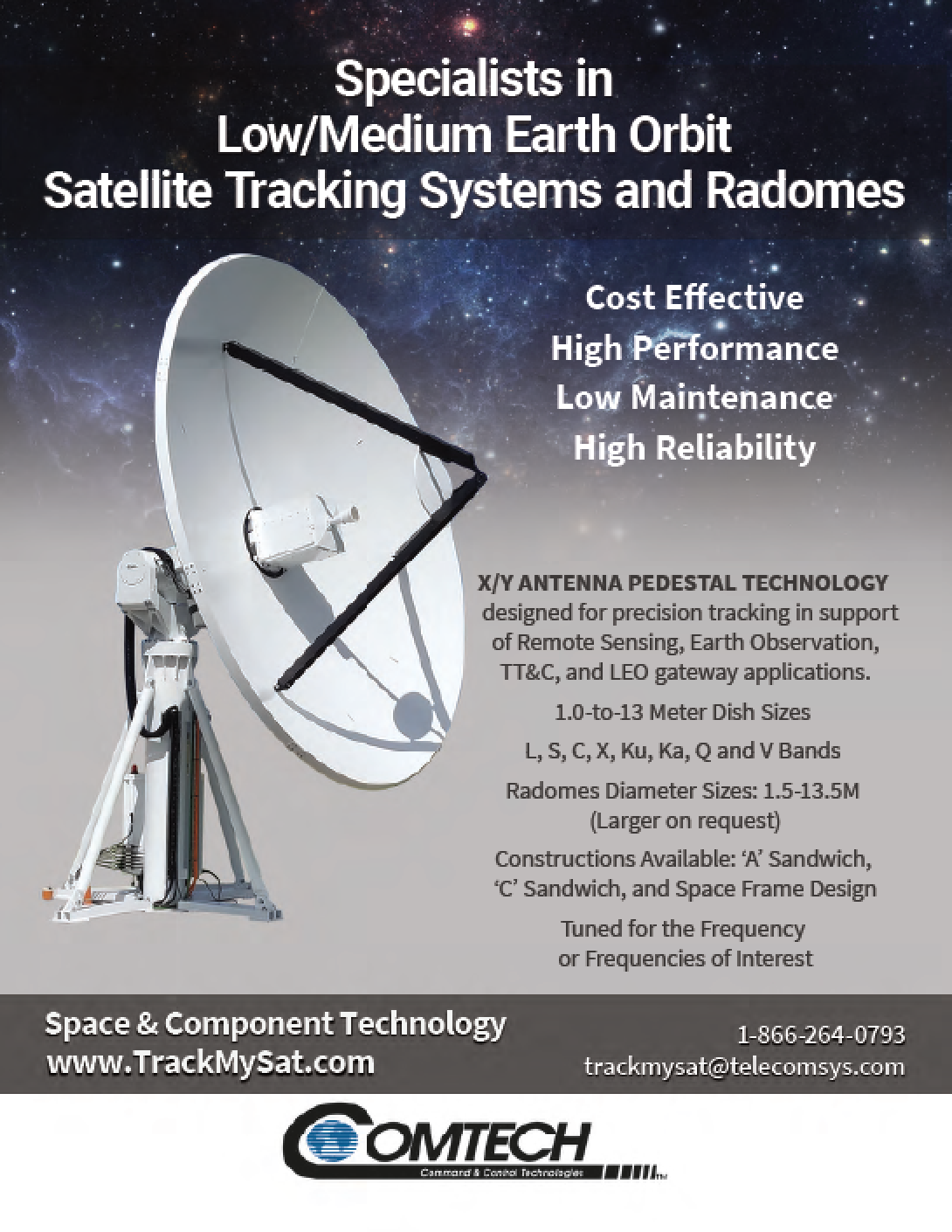 The FCC’s July 12 meeting stressed that the reallocation of C-band needed to happen speedily, but any reassignment of spectrum also needed to protect existing users.

The good news, but also the challenge, is that the FCC suggests the need to increase the amount of spectrum released from the proposed 100 MHz to “at least” 200 to 300 MHz. Financially this could be extremely beneficial to the satellite operators; however, the challenge would be in the amount of work needed to relocate existing customers.

The reason for this optimism is the world’s (and in particular the USA’s) thirst for bandwidth. “The coming roll-out of 5G will require more bandwidth,” says Kassab. “Among ways to meet this demand is for satellite operators to free up bandwidth by optimizing their C-band spectrum use. SES has estimated it can initially free up 100 MHz of C-band spectrum over the U.S., the bank suggests that 300 MHz could be freed up. This could be spectacularly valuable for SES (and Intelsat in a similar manner), as observers expect the FCC to permit a simple sell-off of the freed-up spectrum to U.S. cellular operators.

The bank noted, “SES has estimated it can initially free up 100 MHz, and this seems to be what consensus models. But our analysis of 1,000+ U.S. C-band transponders shows SES could manage to triple that amount, unlocking 10 euros per share of value. We expect the FCC to support that approach and now factor in this potential, explaining the bulk of our target price hike to 22 from 10 euros.”

Sami Kassab, a senior analyst at Exane/BNPP, explained, “We upgrade SES to Outperform from Underperform as we believe the market fails to fully capture the spectrum value associated with its ownership of U.S. C-band rights. Our view of the satellite industry has not changed: we see scope for increased satellite capex efficiency to drive value in video DTH orbital positions, but to put structural long-term pricing pressure on segments with low barriers to entry, namely the connectivity and data markets.”

The reason for this optimism is the world’s (and in particular the USA’s) thirst for bandwidth. “The coming roll-out of 5G will require more bandwidth,” says Kassab. “Among ways to meet this demand is for satellite operators to free up bandwidth by optimizing their C-band spectrum use. SES has estimated it can initially free up 100 MHz, and this seems to be what consensus models. But our analysis of 1,000+ U.S. C-band transponders shows SES could manage to triple that amount, unlocking 10 euros per share of value.” 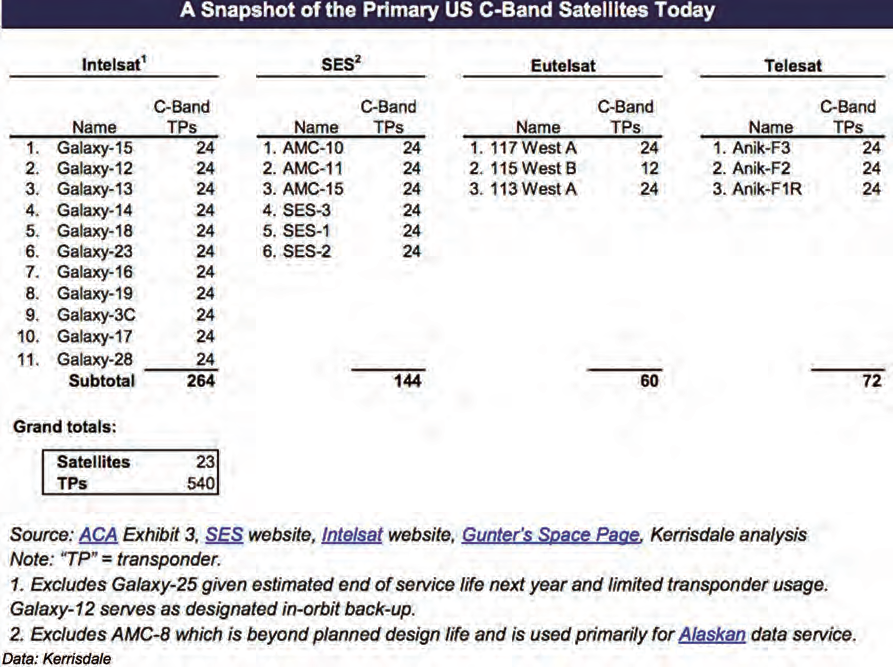 July 12 also witnessed Eutelsat join the C-band ‘club.’ While only a minor player over the U.S. (thanks to the company’s ownership of the former SatMex satellites), it was good that there is near-unanimous support for the C-band scheme, with only Telesat of Canada holding out. This move is not a ‘zero sum game.’ Intelsat and SES (and one presumes Eutelsat Americas) will have to fund the move of their client’s Receive Only dishes, and that will be expensive. Moreover, there are some powerful voices firmly against the scheme. The USA’s public broadcasters (PBS affiliates) are anxious, while the USA’s distributors of content (via C-band) are concerned, and Canada’s Telesat, has already said it has reservations as to who would control access to the freed-up spectrum.

Many Asian satellite operators have also expressed their concerns as to whether an FCC ruling in favor of re-using C-band over the USA would place their own C-band services in jeopardy and helped the World Broadcasting Union (WBU) argue strongly against the move.

A detailed analysis from hedge fund Kerrisdale Capital Management, normally seen as a short-seller in Intelsat stock, is firmly behind the proposals. Kerrisdale states that the Intelsat and SES proposal is the best and fastest way to unlock value in this “crucial” spectrum: “If the price is right, Intelsat, SES, and perhaps a few much smaller peers will roll up their sleeves and work with incumbent users to free up the spectrum. This market-based approach not only appeals to the FCC’s ideological bent; it’s also eminently practical, liberating meaningful amounts of bandwidth in a short period of time and helping the U.S. win the so-called race to 5G. In our view, the Intelsat/SES proposal is by far the leading contender for C-band reform — a high-probability base case, not a long shot.” 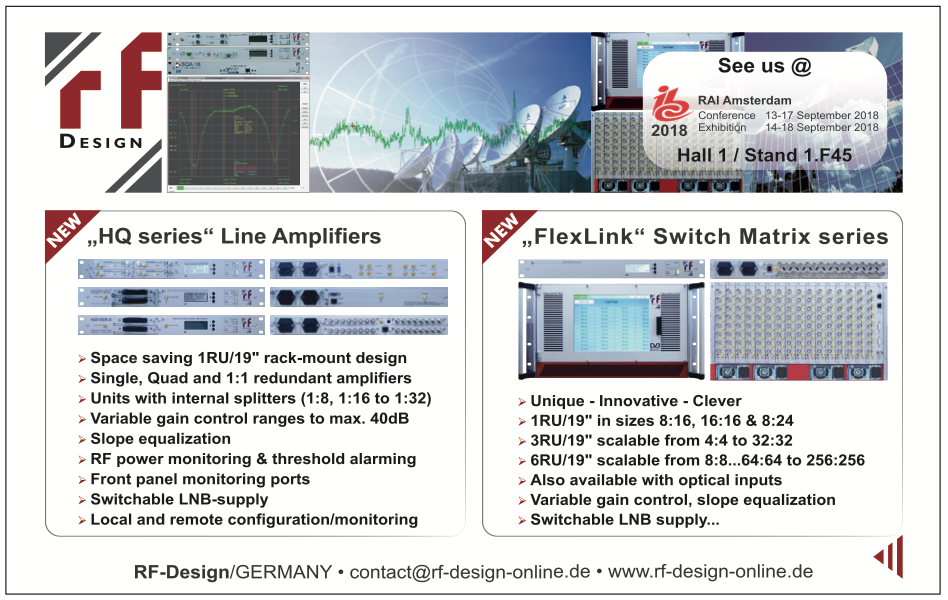 Indeed, Kerrisdale suggests that Intelsat would see a massive 757 percent upside (of some $151 per share), while SES would gain a 217 percent upside (of 51 euros per share) if their C-band hopes are realized, and perhaps exceeded. The hedge fund suggests that 400 MHz of C-band could be in play, subject to the FCC decision. Kerrisdale values the spectrum at just 50c per MHz (per ‘pop’, or one MHz of bandwidth passing one person in the coverage area) which suggests a massive $60 billion overall valuation.

As a benchmark, Kerrisdale says the $0.17-$0.38 per MHz (per pop) valuations of recent C-band auctions in the UK, Australia and South Korea could easily mean several multiples of those values for the USA. Kerrisdale said that a value of $1 (per MHz/pop) is easy to argue. “Such a price is probably too high for the carriers to afford, but, even after applying a large discount, the C-band will still generate tens of billions of dollars for Intelsat and SES — a valuation range that T-Mobile, for one, has directly endorsed.

“Only Intelsat and SES are in the right position to understand the nuances of current C-band usage and cost-effectively manage the transition to 5G; without their cooperation, the process will bog down. That’s why last week’s first step in the rulemaking process prominently featured the Intelsat/SES proposal and former opponents to the consortium’s plan keep pre-emptively modifying their own schemes to more closely resemble it: everyone can sense which way the wind is blowing.”

Kerrisdale stated bluntly that “Intelsat and SES are dramatically undervalued. With enormous embedded spectrum value than can be extracted at a reasonable cost and in reasonable time, Intelsat and SES should trade toward their fair values of $151 and 51 euros per share, respectively, over the next few years.” 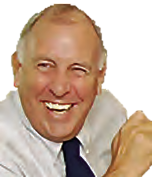 Intelsat and SES senior managers (and their ever-patient investors) must certainly hope that is indeed the case.