The novel coronavirus (formally known as COVID-19) began in Wuhan, China, in December of 2019.

p>However, the total number of infected and deceased is almost certainly far greater as these numbers are limited by monitoring and reporting mechanisms. Many countries around the world have struggled to properly inform their populations on the virus, identify the infected, and mitigate its spreading — a threat which the World Health Organization (WHO) now considers high. 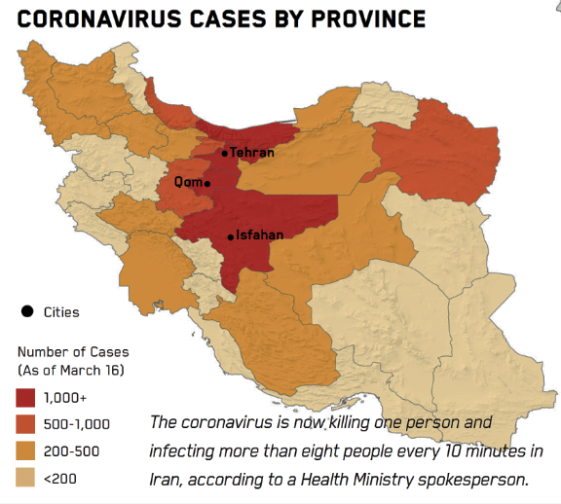 While the number of new coronavirus cases in China is beginning to ease, the rest of the world is experiencing a rapid rise in cases and deaths with each passing day. New epicenters of the virus are now located in Italy and Iran. Italy is implementing a total lockdown. Leaders in Iran, on the other hand, downplayed the significance of the virus for weeks. Their response has compounded the spread of the virus throughout the region and possibly even further into Europe.

Iran currently has the third most coronavirus cases globally (18,407 as of March 19), behind only China (81,155) and Italy (41,035). However, Iran’s numbers are based on questionable Iranian government reporting. Other estimates, which are based on statistical analysis of information from local health representatives and hospital workers, suspect the number of cases in Iran to be at least half a million and possibly more.

This article highlights the severity and scale of the coronavirus in Iran as well as the government’s inability to handle such an outbreak. It also discusses how poor transparency and issues with regional migration and smuggling stand to compound the global impact of the coronavirus.

Satellite Imagery Analysis
Monitoring change at scale can be difficult, especially in restricted and areas of conflict. Maxar satellite imagery offers the highest commercially available resolution, spectral diversity and geolocation accuracy—delivering defensible data for critical analysis. The company’s analysts leverage Maxar satellite imagery to provide organizations with early insights into economic, military, environmental and political changes around the world. For this assessment, satellite imagery was captured and analyzed over two cities in Iran reeling from the coronavirus. 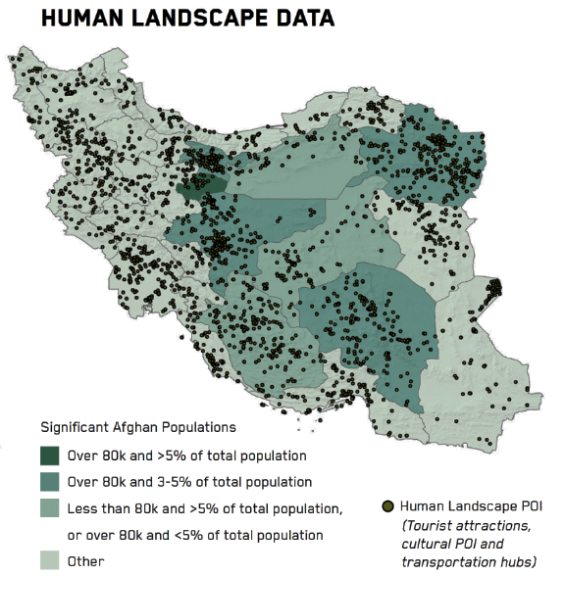 Geospatial Human Imagery Verification Effort (GeoHIVE)
GeoHIVE is Maxar’s satellite imagery crowdsourcing team, comprised of geospatial analysts, developers and imagery analysts who interact with a vetted crowd of online users to validate, discover and annotate features of interest. For this study, GeoHIVE was used to identify both official and unofficial border crossings, such as tracks or paths intersecting the border. The data was used to generate a border porosity model depicting the areas along Iran’s borders where smugglers most commonly circumvent border security.

Coronavirus in Iran
The mortality rate of known coronavirus cases in Iran is roughly double that of global assessments. It has also uncharacteristically infected a high number of government officials, with estimates suggesting upwards of 8 percent of the country’s parliament has been infected. Based on these statistics and additional on-the-ground reporting, many experts believe the total number of cases and subsequent deaths from the virus in Iran is far greater than that being distributed by the Iranian government.

At least 16 countries have confirmed cases of the coronavirus that are linked to people who have traveled to Iran. Many of the travelers had visited Qom, home to the Fatima Masumeh Holy Shrine and Iran’s coronavirus outbreak. Some of the cases have also been linked to Mashhad, which is the site of the Imam Reza Holy Shrine. Each of these holy sites draws tens of millions of travelers from around the world every year.

While the discrepancy between the mortality rate in Iran compared to the rest of the world could partially be due to the government’s inability to detect and properly diagnose new cases of the virus, the government has lacked transparency with the public, whose trust in the country’s leadership has been waning in recent months. There are strong suspicions that the Iranian government, which has a history of disinformation campaigns, deliberately underreported and suppressed coronavirus information and will likely continue to do so.

Two days following Iran’s first reported coronavirus deaths and warnings about its severity, the government appeared to control information about the virus in order to maximize voter turnout for parliamentary elections across the country on February 21st. In what seemed to be further attempts to avoid panic and confrontation with the country’s spiritual leaders, the government also allowed its major holy sites to remain open even with mounting infections and deaths.

The Iranian government’s underestimation of the virus and slow reaction to controlling crowds has undoubtedly contributed to its spread. The following page displays a timeline of events that depicts the slow response and irresponsible messaging by the Iranian government and its spiritual leaders.

Implications for Iran and Risk to Transient Populations
Iran is at the center of a troubled region and faces many issues, both internal and external.

The country’s economy collapsed in 2019 following strong sanctions imposed by the United States. According to the International Monetary Fund, Iran’s GDP dropped an estimated 9.5 percent last year — the third worst annual percent change in the world, behind only Venezuela and Libya. Revenues from the oil and gas industry, the country’s primary export and main source for state funding, is plummeting. Meanwhile, unemployment is increasing and inflation has reached its highest rate in more than two decades at 40 percent. The struggling economy and rapid increase in prices for basic goods is greatly impacting Iran’s citizens as well as its substantial transient population.

The country is not only a key transit country for Afghani and Pakistani migrants looking for a better life in Europe, but has now itself become a significant source country as emigration numbers surge. The coronavirus stands to not only compound economic woes and Iranian emigration, but also poses risks of spreading to significant migrant populations that are transiting the country illegally in route to Europe. In 2019, more Afghan migrants arrived in Europe than any other nationality.

There are an estimated two to three million Afghans currently in Iran, most of whom are undocumented and living in urban areas. While Iran has been a top destination for Afghan migrants for decades, the collapse of the Iranian economy has caused large numbers of undocumented Afghan residents to consider onward travel to Europe or a return to Afghanistan. Sophisticated smuggling networks have capitalized on Iran’s porous borders to facilitate the surge in migrant movements.

Many of the countries bordering Iran have started closing their land borders as a result of the coronavirus and its rapid spread. But despite these measures, the terrain and border infrastructure throughout the region permits illicit cross-border movement, which occurs on a daily basis. In order to evaluate the porosity of Iran’s borders, Maxar’s GeoHIVE crowdsourcing platform was used to identify both official and unofficial border crossings. The results yielded a total of 26 official land crossings and thousands of unofficial crossings—areas where tracks or paths were observed intersecting the border. This reveals how smuggling networks have thrived for decades and present increased health risks to neighboring countries during this pandemic. 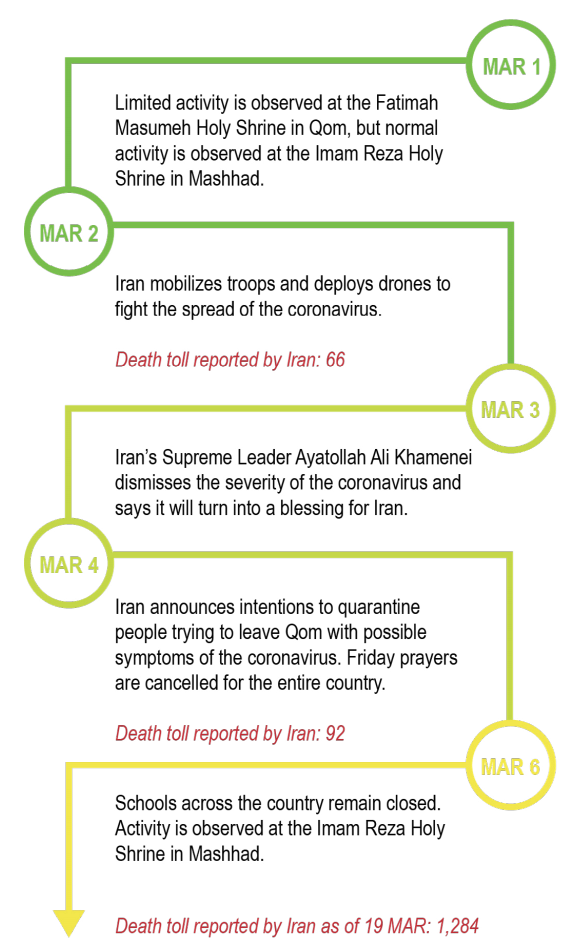 Conclusion
As many countries throughout the world begin to take strong countermeasures for both containing infected populations and limiting the chances for new outbreaks, there are still many unknowns.

The Iranian government’s initial and negligible actions towards the coronavirus allowed it to spread undetected for weeks, and is still permitting large gatherings in highly-infected areas.

It remains to be seen to what level the coronavirus has infected the large migrant communities and transient populations located in Iran and throughout the region, many of whom have limited, if any, access to health care and basic services.

Given Iran’s porous borders and the presence of persistent smuggling networks, the outflow of infected persons from Iran is likely far greater than presently known.
explore.maxar.com/spotlight.html 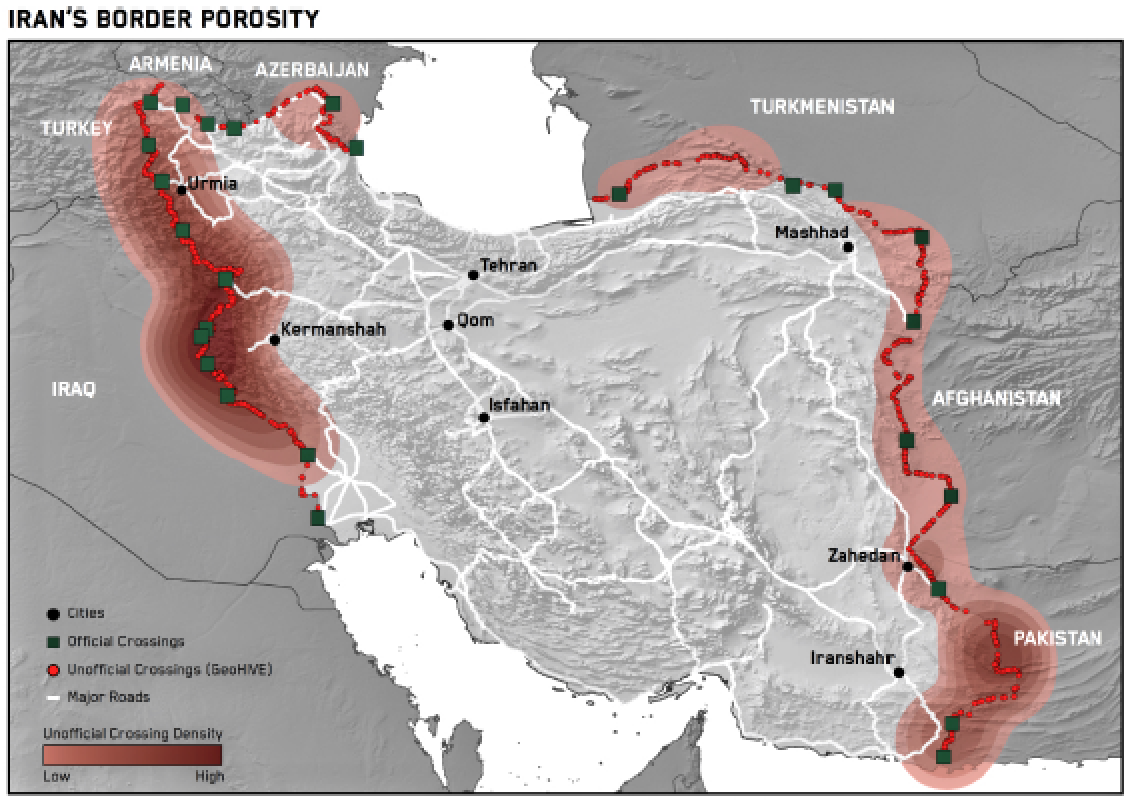