In 2008, David C. McCourt formed Satellite Holdings, LLC, a partnership between private investment firms McCourt Capital, LLC and The Edgewater Funds. Since then he has begun a series of high-profile acquisitions to found Skyware Global — the world’s first total solutions provider of antenna systems. Here he gives us his industry predictions and explains why Skyware Global is well-positioned to support future growth. 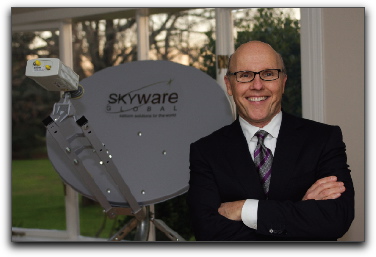 SatMagazine (SM)
Mr. McCourt, can you give us a bit more background to your founding Skyware Global?

David McCourt
Of course. Satellite Holdings, LLC was founded in late 2008 with a view to forming a company that could fill a gap in the market for an all-round antenna systems provider that would take responsibility for the overall product. Having over 30 years of experience in the cable and telecoms industries I knew that it was important to take niche players seriously and get a full understanding of where the opportunities lie. I had spoken to satellite providers, who told me that they would welcome a company that took responsibility for the entire outdoor unit.

We acquired the Raven Group, the leading provider of consumer satellite broadband antennas, on New Year’s Day of last year, and shortly merged it with nearly half of ASC Signal Corporation’s total business. This included: the DTH, VSAT and RF business units, as well as Germany-based Skyware Radio Systems, a unit previously owned by Philips Electronics, and ASC PRC, the operating entity located in China.

The Raven Group had existing operations in Illinois, USA, Accrington, U.K. and China. However the acquisition has added manufacturing facilities in North Carolina, USA, and Zhuhai, China, as well as R&D and engineering offices in England, Scotland, and Germany. With one of the world’s leading research and development divisions, we believe the companies have merged to fill the gap that we identified in the market to form the only global total solutions provider of integrated outdoor units and associated electronics and equipment.

SM
Why did you consider the Raven Group to be an attractive investment?

David McCourt
Raven’s strong microwave business first caught our attention. Their RF microwave engineers are among the very best in the industry and they know how to design and manufacture equipment to perform a certain task at a certain price point. The company already had a reputation as a leader in the design, manufacture and distribution of components for the global consumer satellite industry, and had proven itself to be an attractive investment, demonstrating growth of over 50 percent per annum for the past four years.

Their customers provide direct-to-home satellite services in remote regions around the world that can’t access cost-effective services via cable. This market is expected to expand thanks to the growth in worldwide demand for high-bandwidth and video applications.

SM
What was the motivation behind the subsequent mergers with ASC business units, including Skyware Radio Systems?

David McCourt
In much the same way that Raven is at the forefront of the design and manufacture of components for the consumer satellite industry, ASC holds a leading position in the enterprise market. Besides the markets that they operate in, the acquisition has created a lot of synergies, for instance the product materials and global reach of both companies differ so that together we have created a company that offers the full suite of products to any territory, for any application.

Thanks to investment in expansive countries such as India, China and across the continent of Africa, the concentration of high-growth companies in these regions have and will continue to deliver significant opportunities in the enterprise market.

We must not overlook the electronics units though as they form a major part of Skyware Global’s offering. Electronics enable us to offer an end-to-end package, meaning that we are the only company accountable for the entire system.

All parts of the business work together to deliver complete outdoor systems. This means that Skyware Global can optimize systems, properly developing and designing units to work together right from the concept stage.

SM
What are your predictions for the global satellite equipment markets in 2010 and beyond?

David McCourt
As we make the move from Ku- to Ka-band frequencies we will see a transformational change in the industry and a marked improvement in the bandwidth capabilities of broadband via satellite.

Raven was the first to develop consumer Ka-band two-way antennas and the first contract with WildBlue was signed in 2003, and rolled out the following year. Raven was the first to develop and provide large volumes of consumer broadband products to the market at an attractive price. Using existing DTH technology, Raven developed and improved on the designs, to offer Ka-band products that were economical on price, enabling our customers in turn to offer a very attractive and competitive offering.

Up until now, Ka-band has remained very much specific to the North American market. Currently, in the USA for example, Ka-band accounts for around 80 percent of satellite broadband provision. Interestingly there has been a huge take-up in cities as well as rural areas in the USA. However, with two major satellite launches scheduled for this year and next, the door will be opened for satellite broadband provision in Europe.

SM
Which satellite launches are you referring to?

David McCourt
Avanti Communications is due to launch the Hylas satellite in 2010, which is expected to serve several hundred thousand people in the UK alone, whilst Eutelsat’s KA-SAT in 2011 will target 15 million homes across Europe. With the launches of these satellites and reasonable rates for consumers, we foresee the consumer broadband market expanding in a similar way to the U.S.

Demand for content over the Internet is expanding faster than ever before and the advent of higher broadband speeds via satellite will enable satellite broadband providers to supply high-bandwidth and video applications to consumers. For the first time in Europe, satellite providers will be able to seriously compete with the level of broadband services delivered by cable and fiber providers.

In the U.K., the government’s Digital Britain initiative, which has a minimum target of 2mbps broadband provision for all, will only happen in time via satellite. Digital Britain echoes Obama’s pledge for investment in the broadband infrastructure in the U.S., and other similar schemes are being developed in countries all around the world. Satellite can offer close to 100 percent geographic coverage, allows rapid and flexible deployment and has a low carbon footprint. It is the single, most effective route to achieving these goals.

SM
You’ve spoken a lot about consumer broadband. Do you see opportunities in the enterprise broadband market as well?

David McCourt
Absolutely. The enterprise broadband market is very well-positioned for growth in the coming months. Large demand for VSAT terminals in India, Africa and South-East Asia in particular, coupled with the speed and ease of deploying broadband via satellite for high-growth businesses — it is far cheaper and easier to add an extra customer via satellite than via a wire-based product — put it in a strong position for the future.

The geography of these regions is such that cable and fiber services often can’t reach businesses so the provision of services via satellite will become paramount to their everyday activities. Being a global company, with manufacturing in U.S., Europe and in the Far East, puts us in the happy position of being able to provide our systems at low cost and from multiple locations.

SM
In summary, what is your overall strategy for 2010? 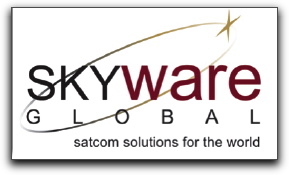 David McCourt
Our total focus is on delivering consistency, quality and efficient worldwide logistics to ensure that our partners can offer a quality service at a reasonable price. We are continuing to invest heavily in our R&D, to offer cutting-edge products to our customers. As Skyware Global continues to grow we will be able to extend our worldwide presence even further to offer an ever more tailored and cost-effective offering to each of our clients around the world.