This is a sign that some of the apprehension surrounding the hosting of government payloads on commercial satellites is subsiding.

The Space Modernization Initiative is used, in part, to fund innovative programs to ensure that space systems will meet future endeavors. The money attached to the hosted payload initiative was $12 million. While comparatively speaking this is a small portion of the budget, it does provide a funding stream that allows the government to take advantage of hosted payload opportunities. Further, the Space Modernization Initiative asks the HPO to identify relevant commercial opportunities for proof of concept to develop/integrate system concepts.

This year’s budget did show positive steps forward in the support of hosted payloads even though it may be slower than the industry would like.

While the President’s budget and the Senate seemed to be in full support of innovative programs such as hosted payloads, the House Appropriations Committee fought back. The House rejected the funding for the hosted payload that had been part of the Space Modernization Initiative.

More troubling than the lost funding is the accompanying language, that states:

The Committee is concerned that, in a time of declining budgets, the Air Force and the Department of Defense may resort to silver-bullet acquisition concepts in an attempt to save money and accelerate immature concepts and technologies… Quick-fix substitutes for years of hard-won experience are attractive but illusory.

To refer to programs like hosted payloads as “immature concepts”, “quick fix substitutes” and “illusory” is disturbing, particularly in light of the recently successful payloads, such as the Australian Defence Force hosted payload and the Commercially Hosted Infrared Payload (CHIRP).

In many ways, this language closes the door on innovation and implies that only programs that have been acquired over decades are valid solutions. Solely protecting large programs of record is a slippery slope not only in this budget environment, but also as we look to continue our space superiority in the future through disaggregation and a greater need for resilient architectures.

Of course, the ugly refers to the lame duck session of Congress. The passage of the Continuing Resolution has made the FY13 budget, and each of the Committee marks, irrelevant.

A clean CR was passed in September that would fund the government at FY12 levels through March 27th. The November election will largely shape what happens next.  In the new Congress, all previous bills will need to be reintroduced, and it is unclear whether they will use the existing mark ups as a baseline or will start all over again from scratch.

Our hope is that the government will look toward innovative solutions such as hosted payloads to deliver more cost-effective solutions in this environment of tough choices and budget cuts.

Question: What can we as an industry do to further educate Appropriators and Congressional leaders on the value and cost benefits of commercially hosted government payloads?

"Persistence and consistency pay off. We spend a great deal of time and effort educating members, committees and staffs about our programs. Let's make sure we continue to find new ways to add value in every meeting, like we do now offering hosted payload recommendations for hard problems facing national security interests and Government overall. We must always make sure members and staff hear the same messages from HPA regardless of who delivers the message."
Robert Burke, Vice President & Deputy General Manager, Space Systems,
Northrop Grumman Aerospace Systems

"Governments around the world have been involved in hosted payloads for many years with great success.  Traditionally, these programs consisted of government payloads on government satellites, however there are even plenty of examples of success with government payloads on commercial satellites in more recent history.  The Federal Aviation Administration's (FAA) Wide Area Augmentation System (WAAS) started using hosted payloads on commercial satellites in the 1990s.  Hosted payloads are not new, nor are they 'silver bullet' initiatives. While they may not be the panacea for all capabilities, the time and cost benefits offered by commercially hosted payloads make them a viable tool in our future communications architecture."
Tim Deaver, Vice President, Government and Institutions Development
SES

"Boeing believes that the value and cost benefits of commercially hosted government payloads are currently being demonstrated on the UHF hosted payload aboard the Intelsat IS-22 for the Australian Defense Force (ADF) and currently being utilized by the United States Government, as well.  This satellite, built in less than 30 months, has been operational since May of 2012.  The ADF has publicly stated that this hosted payload approach saved them more than $150M.  In addition to Communications payloads, the Air Force CHIRP program demonstrated economic value of IR starer technology for missile warning.  These two examples underscore the need for the United States Government to further apply the Space Policy, which encourages the use of hosted payloads, by removing impediments to enable wider implementation of these capabilities.  Appropriators and Congressional leaders need to hear that hosted payloads are a demonstrated, affordable alternative to dedicated government satellites through shorter build cycles and shared satellite, launch, and ground infrastructure."
Jim Simpson, Vice President of Business Development Boeing Space & Intelligence Systems

"Hosted payloads are not meant to be the solution for inefficient space acquisition processes. However, hosted payloads can offer an alternative way to cost-effectively implement certain space missions that can coexist with commercially operated satellites. The best way for industry to educate Congress is by providing examples of hosted payload successes. There are several examples of hosted payloads that have fully achieved the mission objectives at a fraction of the cost of traditional space missions. Industry must share these approaches with Congressional leaders, including the factual analysis of the mission economics, the key factors that enabled the hosted payload success and the obstacles that were overcome to achieve this success. The Hosted Payload Alliance was formed to provide objective advice and subject matter expertise on hosted payloads. The HPA has been working with organizations like USAF SMC and NASA to fully explore these issues and should do the same with key Congressional staff."
—Don Thoma, Chairman of the Hosted Payload Alliance, President and CEO, Aireon

"With DoD spending slated for significant cuts, cost-effective hosted payload missions will surely be increasingly attractive to both the executive and legislative branches of government, particularly if these new solutions are thought about in terms of expanding the government's current architecture of legacy systems and capabilities still in the pipeline. As an industry, we need to continue to demonstrate the value of hosted payloads as a complement to dedicated satellites, and to show that rather than a "quick fix," they represent a crucial and logical step toward developing a sustainable space architecture for the future."
—David Anhalt, Vice President, U.S. Government Solutions, Space Systems/Loral 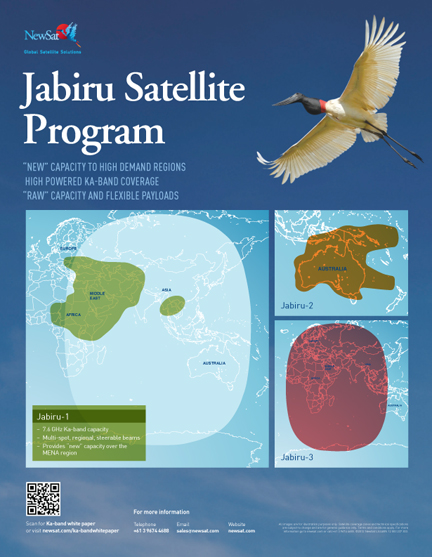