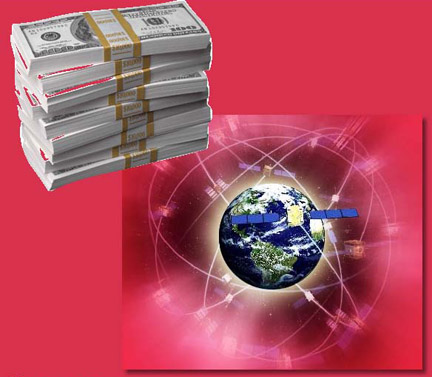 As regards Eutelsat, the bank’s report is glowing... “Eutelsat remains one of our core Overweights. It offers a combination of (i) attractive and highly visible revenue growth (8 percent 2010-13 CAGR) driven by (ii) medium-term structural trends (Multichannel, HD etc.) (iii) controlled OPEX and CAPEX (iv) and a highly focused management team. We believe the stock will benefit from the strong execution of new projects (Ka-Sat), de-leveraging and potential selective acquisitions in 2011-12.”

Morgan Stanley highlights Eutelsat’s 355 new transponders coming on board by June 2013, helped by a generous interpretation of Eutelsat’s Ka-band spot beams. “Eutelsat plans to launch an additional six satellites by the end of calendar Q1 2013, after having successfully launched Ka-Sat in December 2010. These satellites will increase the group’s transmission capacity by 273 transponders on top of the 82 spot beams soon to be made commercially available on Ka-Sat. For modelling purposes, we assume one spot beam equals one transponder. This means that between December 2010 and June 2013, ETL will have increased its capacity by 355 transponders,” says the bank’s report. 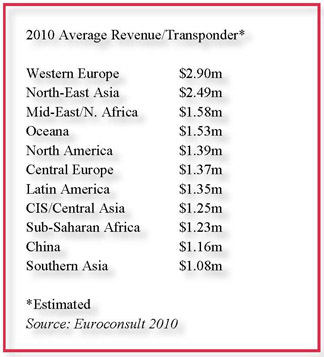 “New Eutelsat capacity (six new satellites by June 2013) together with new projects (Ka-Sat) will continue to target ETL’s core markets. According to Euroconsult, Western Europe and the Middle-East & North Africa are among the three areas, with North-East Asia, where the average revenue per transponder is the highest in the world. For instance, ETL said it reached 3.6m euros per transponder across its HOTBIRD network in 1H11.”

“The launch of Ka-Sat allows ETL to explore new business opportunities,” says Morgan Stanley. “Ka-band has two main advantages: (i) It is around eight times cheaper than Ka-band and (ii) Its shorter wavelengths allow customers to send and receive signals using very small antennae. ETL intends to dedicate 60 percent of Ka-Sat’s capacity to consumer broadband via its Tooway brand, while the remaining 40 percent will serve professionals. The B2B2C offer will consist in selling capacity to Telecom operators or Internet-service providers, who will then re-sell it to their customers under the form of a satellite broadband offer. ETL’s consumer offer will target around 500K households located mainly in rural and remote areas.”

The bank says that despite only announcing modest contracts to date, they see Eutelsat ramping up revenues from Ka-Sat to reach 100m euros by June 2014, with “the bulk of the growth being achieved in fiscal 2013.” The report reminds readers that Eutelsat remains on the M&A trail. “Management said it could be interested in buying out competitors in emerging markets, especially in Asia, in order to reach / consolidate ETL’s positioning there. This could provide the group with attractive new growth opportunities in our view,” said the bank. 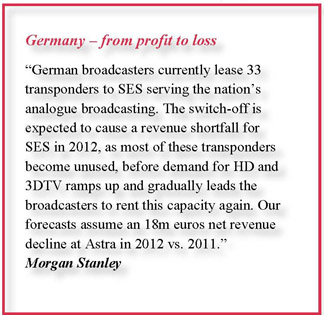 Luxembourg-based SES also received the full Morgan Stanley treatment, although little mention is made of the considerable restructuring now taking place at the business. Romain Bausch holds onto the top spot in a much-altered set of management committees, with just one overall executive committee emerging and a fresh operating structure where the old “World Skies” and “Astra” staffing divisions come together, with an emphasis on a streamlined sales and reporting structure. More detail should emerge in the upcoming weeks as SES begins its Road Show presentations to investors. It held its AGM on April 7, and a trading update is due May 12. However, no major surprises are expected as far as senior management is concerned, other than their responsibilities will now extend to global roles ­— and there’s about €30m in potential savings in the pipeline, says the company.

The biggest difference in the Morgan Stanley report is that the bank has now built in to their price target their full three euros per share valuation for proposed Ka-band constellation O3b. The bank is forecasting 30 percent 2010-2015 free cash flow CAGR, which is not bad by anyone’s measure. “SES plans to launch 12 additional satellites by the end of 2013, providing both replacement and incremental capacity. The latter will grow by 283 transponders, focusing essentially on Europe and emerging markets. On the other hand, SES intends to manage its exposure to the North American market cautiously,” says the bank’s report.

“Over the last few years, growth in US Government Services (25 percent of SES’ U.S. business) has been offsetting weakness in Enterprise Services (also 25 percent of revenue) in the U.S. The remaining 50 percent, split almost equally between cable and DTH operations, has been broadly stable. However, the U.S. market is highly competitive, while demand for Ku-band is lacklustre compared to other regions of the world. SES, therefore, intends to rationalize its Americom fleet through the non-replacement of satellites. This will start with the non-replacement of AMC-5, launched in 1998. Management is also considering taking another satellite out in due course,” states the report. 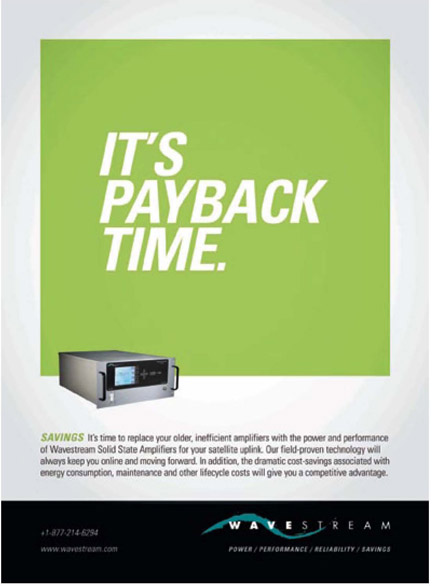 “Growing capacity, stable pricing and strong demand for satellite transmission, especially in emerging markets, will boost SES’ revenue growth from 2012. Eighty-four new transponders will be put in orbit in 2011, 56 in 2012 and 130 in 2013. The launches most crucial to SES’ growth will be (i) SES-5, due to be launched in 4Q11 (64 Xders) and targeting Northern Europe and Africa, and (ii) SES 6 and SES 8, both due to be launched in 1Q13 and adding respectively 49 and 21 Xders. These will target LatAm, South Asia and Indo-China,” says Morgan Stanley.

“Capacity will grow by 23 percent over the next three years. However, key launches are due in 2H11 (Quetzsat, SES 4, SES 5). Since satellites go through a testing phase before they are fully operational, this means that they will start contributing to revenue only from the very end of this year. Also, the German analogue switch-off, due on April 30th 2012, should negatively impact SES’ 2012 revenue growth before a pick up in demand for other services such as HD or 3D start to make up for the shortfall caused by the switch-over. Growth should thus accelerate from 2012,” states the report.

However, there has been more than a little scepticism over the future prospects of O3b, and, in particular, whether the proposed constellation will find sufficient demand for its capacity. The bank’s report has few doubts. “We view SES’ investment in the O3b Networks as a potentially highly attractive source of future value creation. We do not believe the shares are currently pricing in any value for O3b since it is not due to launch initial satellites before 2013. However, we have constructed an initial model which indicates potential EV of 4 billion dollars for O3b, representing a potential 3.0 euros on top of the SES share price. We include it in our bull case valuation of 28 euros / share. This assumes the eventual rollout of 20 satellites using 90 percent of capacity. We expect demand to initially be focused around the medical, governmental, industrial and financial sectors. However, we see scope for the operations to be dramatically up-scaled over time if demand for consumer and small business broadband emerges. Technically, there is scope to launch a constellation of 120 satellites,” the bank reminds investors.

Indeed, the bank add this, “We view O3b as a potentially material positive for the investment case of SES because: (a) its initial investment of 75m euros and services in kind looks very attractive and the cash flow has already been deployed, (b) SES has a clear option to consolidate on pre-agreed terms through a right of first offer, (c) we see this as an excellent way of SES establishing a major emerging markets KA-band business without deploying the required $1.2bn Capex, and (d) the business should generate cash flow at a very early stage.”