The LEO space industry is in a hectic development phase. One after another constellation is launched, backed by generous funding by world billionaires. Their ambition and bank accounts seek equivalently ambitious large-scale programs looking at the sheer volume of spacecraft that are planned, creating scary visions of tens of thousands of satellites around the world, of which 15 percent potentially can become debris.

This reality is not as remote as we might wish to believe... when we look into the space market, we see operators such as Iridium or Globalstar as well as also companies like Spire or Planet, each having hundreds of satellites circling the Earth in low orbits.

Also, we see the new space industry preparing itself for business. With the broadband LEO’s still in the planning phase, a number of smallsat IoT operators launched one or two demonstration satellites at the end of 2018 and are now preparing for additional launches during 2019. An expansion of their constellations combined could easily carry hundreds of satellites
into orbit.

All these plans exceed the current satellite numbers by far. Recent forecasts (NSR) foresee around 5,500 smallsats launched during the coming eight years and the majority of them are populating constellations.  People start to worry — about space debris.

Off-scale animations (see video URLs at the end of this article) play into these worries and feed them using state-of-the-art entertainment technology. Plus, the worldwide digital media coverage of the display of space capabilities such as the recent shooting down of a satellite by India is not removing those worries.

Existing LEO satellite operators with their fleets in space are already faced with an increasing number of questions regarding their responsibility. New satellite operators are questioned about their design and the manner in which they make certain space and, in particular, the LEO belt is not becoming a scrap yard. 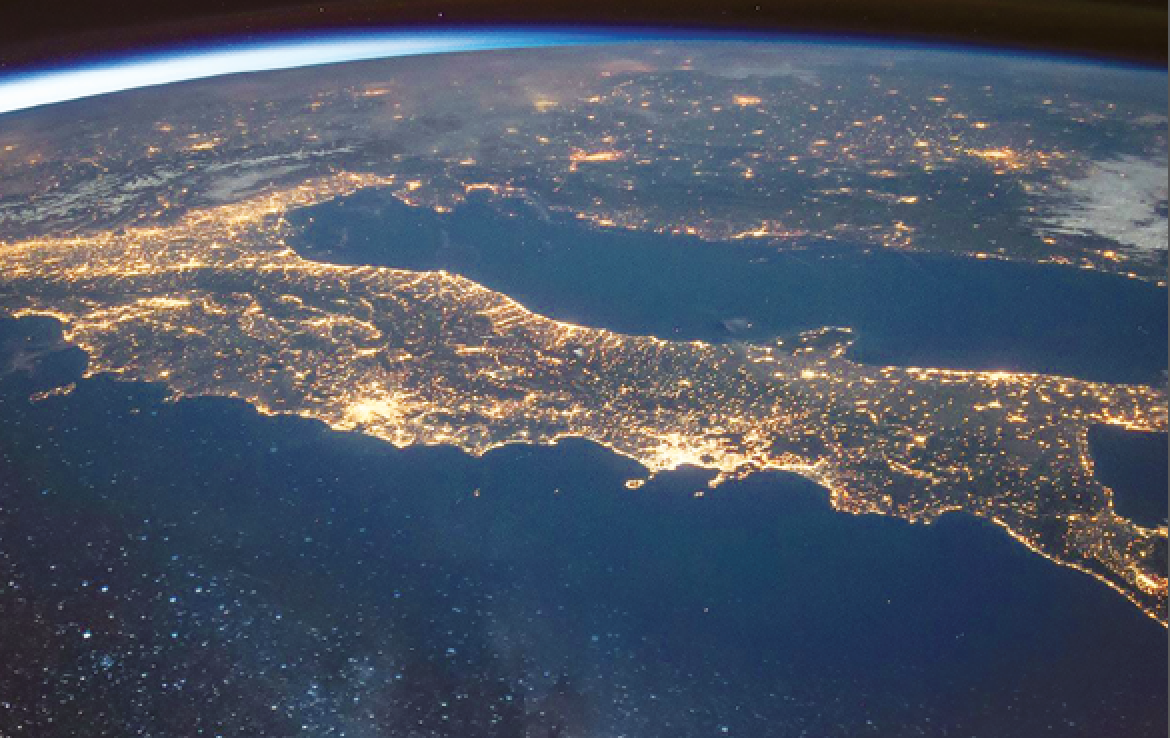 We Depend on Satellites
Space debris worries are legitimate. The global economy depends on the ability to operate satellites safely in order to fly in planes, prepare for severe weather, communicate from sea or remote locations, broadcast television, study our changing climate or track goods, trucks, trains or vessels to manage our global logistic streams.

In order to continue using satellites in orbit around Earth for years to come, especially the low orbits as proposed in the NewSpace plans, we need to ensure that the environment around Earth is as free as possible from trash leftovers from previous missions. Currently, around 22,000 objects larger than 10 cm. are tracked by the U.S. Space Surveillance Network. Most of them are in orbits up to 2000 km., with the greatest concentration in the 800 to 850 km. belt.

This means that a serious consideration of the issue is needed. Gone are the days that space was a government and military domain that could not be held accountable for what they were doing.  We see this concern reflected in two developments:  there is increasing pressure through more regulations (e.g., from the FCC) and we also see a call for self-regulations from existing operators such as Iridium, Spire or Planet.

Increasing Pressures
Currently, the internationally accepted guidelines as proposed by the Inter Agency Debris  Coordination committee (IADC) is to de-orbit satellites within 25 years.

Constellations, especially those with satellites in lower orbits such as the 600 to 650 km. altitude, which is of particular interest to smallsats, have already claimed compliance with the guideline, meaning that their satellites de-orbit before the end of that 25-year period.

However, this approach is again leaving de-orbiting to a random uncontrolled process, risking collisions. Yes, the U.S. Space Surveillance Network can provide a collision warning, but what can the satellite operator do with such a warning when there is no propulsion on board the spacecraft, which is currently the standard in smallsats.

One of the first proposals to tackle this is being undertaken by the U.S. FCC to oblige satellites flying higher than the ISS (around 400 km.) to carry on-board propulsion.  Although this proposal has not won universal support as of this writing, it is clear that this proposal is in the interest of all operators to pursue controlled de-orbiting — not only to avoid future fines, but also to make space safe and clean to use for everyone. 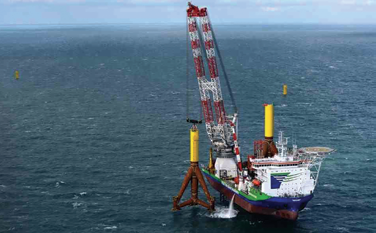 Placing Windmills in the North Sea requires extremely accurate measurements as the mast needs to be installed 100 percent straight up. To monitor the exact position of windmill mast, a realtime satellite M2M connection was established from the construction vessel to the datacentre onshore and back. Challenges in the project were that machine interfaces are not all IP, transmission protocols are not designed for satellite, there were multiple machines using the same satellite link and the use of heterogeneous networks (GEO-sat, LEO-sat, 3/4G, radio…).
__________________________________________________

Self-Regulation in the Industry?

Planet and Spire (“We are a responsible space actor”) claim to be managing their fleets to prevent retired spacecraft from lingering in space beyond internationally accepted guidelines. That is not too difficult to accomplish when you look at the altitude in which they operate. Iridium also thinks this is a good time to bet outspoken about orbital debris — just after the launch of their next generation of their satellites.

With all of these companies having dozens of satellites already in space, the question is if this is a real concern or just clever PR with the eye on the growing concerns with space debris in the international opinion. The real question is can their claim that the debris issue in LEO will be “a self-correcting problem”  be correct.

Meanwhile, a new initiative is launched: The Space Sustainability Rating (SRR), a voluntary system to encourage those who operate satellites to create as little debris as possible. The SRR will create an incentive for companies and governments operating satellites to take all the steps they can to reduce the creation of space debris. This will create a more equitable opportunity for new countries but also the commercial sector in space with less risk of collision with older satellites.

Does Mission Come Before Durability?
When it comes to space debris and the maximum time it will stay in orbit, physics are easy: the higher the orbit, the longer the debris remains in space. For example, a satellite without propulsion in a 300 to 350 km. altitude de-orbits after two to three months, a smallsat in a sun-synchronous or polar orbit at 600 km. typically will de-orbit in, roughly, 15 years. Satellites at 800 km., however, enter orbital decay already measured in decades. Above1000 km, debris will continue circling the Earth for a century... or more.

Ultimately, it is the satellite’s mission that defines the on-orbit altitude...

Earth Observation (EO) satellites, such as those planned by Black Sky (400 km.) and Capella Space (400 to 520 km.), operate at a relatively low altitude to capture better quality pictures; Spire (500 km.) is a bit higher in altitude and occupies a larger area where it can read out radio waves from AIS transmitters and GPS signals. A satellite IoT operator such as Hiber works around 600 km. to achieve large satellite footprints and efficient global coverage. Iridium operates at about 800 km. as does the future Sky and Space Global system. OneWeb plans to operate at 1200 km.

Each have their own technical and business reasons for their orbit. Smallsats, for example, have no influence (yet) on the altitude where they are released into orbit and will be slotted anywhere in the 600 to 800 km. Polar orbit belt, as they rely heavily on rideshare opportunities with larger satellites.

Extending Smallsat Capabilities
For new space operators, the challenge is to meet mission requirements and at the same time comply with de-orbit regulations, or even to self-impose regulations upon themselves. Orbital height is a main parameter for the commercial success of the mission, with major implications for the way the satellites are designed and launched.

The orbit question is also closely tied with the question whether one needs propulsion or not. Of course, ideally a rocket launcher will place your satellite exactly where you want it located, optimizing the lifetime and performance. However, if this is not the case, propulsion is currently the only way to bring smallsats into the higher target orbit.

Depending on the altitude, propulsion can extend the smallsat’s lifetime significantly, especially in LEO. With each performance increase of propulsion systems for smallsats, the cost per satellite will decrease dramatically.

In example, if the lifetime of a satellite is extended by an additional year using propulsion, the overall cost of a planned mission for a three year mission will be reduced by one third.

However, propulsion holds even more benefits: End-of-life management and space debris avoidance. It enables a controlled de-orbiting phase for smallsats, especially when looking at (self-) regulations. In particular, with regard to human spaceflight, it makes sense to cross the 400 km. orbit of the International Space Station as quickly as possible.

With propulsion, operators are also finally able to respond to collision warnings from the U.S. Space Surveillance Network, using their propulsion for a collision avoidance maneuver, saving themselves and others for the harm of a collision and preventing an increase of space debris around Earth.

Implications for Smallsats
The space debris discussion is certainly triggering another approach in the NewSpace industry. The issue is taken seriously and parties, both in the industry and the regulatory field, are looking for ways to appropriately deal with it. Based on the reactions from the NewSpace industry and the regulatory field, it appears that — for certain missions (above 600 km.?) — propulsion is a good idea.

How can this be done, in particular with smallsats ? So far, propulsion systems have been too large to be placed on a smallsat, which is why the market is looking more and more into miniaturization.

Do we use chemical propulsion or electrical propulsion? Having propulsion also translates directly into another must-have for smallsats: accurate knowledge of attitude and orbit (ADCS).

Also, for satellite fleets, a mechanism is required to manage the full constellation in regard to orbital position, fuel and lifetime management, as well as service quality. These mechanisms are crucial to determine the profitability of smallsat constellations, the reliability and validity of the data generated and communication services to users and customers on Earth.

Hub Urlings and Alexandra Sokolowski are members of the Dutch smallsat eco-system of companies that work together in the Netherlands.

Hub Urlings is a SATCOM Consultant and the ESA and Innovation Manager at Hiber as well as the founder of EUsatcom and an M2sat Consultant.

He was one of the pioneers of Satellite M2M as Product Manager for Inmarsat-C at the famous KPN Station 12. The reliability and success of this “small data” satellite service, its global coverage and reliability made that the service, was used for a myriad of applications: from sending messages, to truck fleet management, to pipeline monitoring and bringing back data from all types of sensors. At that time, satellite was the only type of network that was able to offer global IoT coverage. Now, 25 years later, that has not changed and he is again involved in the development of a new generation of satIoT services, working as the Innovation Manager for the ESA program at Hiber. His company, M2sat, is a value-added service provider for satIoT services.
linkedin.com/in/huburlings

Alexandra Sokolowski is the Business Development Manager for Hyperion Technologies B.V. Alexandra has been in charge of space topics, ranging from ground segment to space segment, for the past eight years and has a solid experience in content management, storytelling and marketing. In early 2019, she joined Hyperion Technologies as Business Development Manager to continue telling exciting stories about the NewSpace market and connecting people.
linkedin.com/in/alexandrasokolowski