Telecom providers are dealing with unprecedented internet traffic volume during the current COVID-19 crisis as more people are working from home during lockdowns. The Organization for Economic Co-operation and Development (OECD) released a report on this subject in May of 2020 entitled “Keeping the Internet up and running in times of crisis,” which showed that a majority of countries reported more than 25 percent increase in traffic volume and some countries even experienced more than a 50 percent increase in internet traffic. In the United Kingdom, the daytime broadband usage increased by 35 to 60 percent when compared to pre-crisis levels. 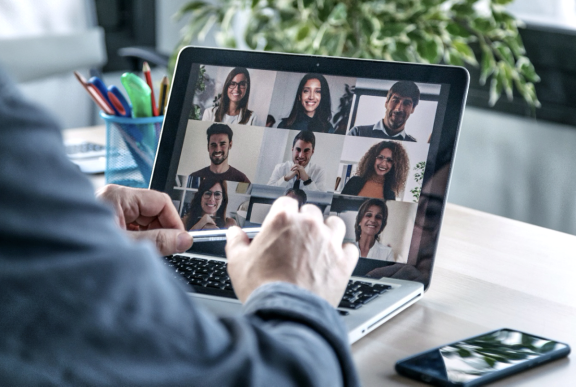 The industry consensus is that even once lockdowns are lifted that traffic volumes will remain higher than pre-crisis levels. According to sources, such as the Technology Services Industry Association whose members say that some form of working from home is here to stay. While employees will return to offices, many will continue to work from home at least part of the time. Facebook has said that half of its employees will be allowed to work from home permanently. In-person events and conferences have been replaced by webinars, a trend that is expected to continue even after the current crisis subsides.

As companies move more of their work online, they have accelerated digital transformation projects which further increase the number of applications running on networks. So even after the current crisis has passed, we expect network traffic to be significantly higher than it was before the crisis. This is on top of the “normal” Internet traffic growth of around 25 percent per year.

Many telcos have been able to accommodate the additional demand within their deployed terrestrial infrastructure. In Korea, network loading is still only 45 to 60 percent of network capacity even with the additional traffic demand. Many telcos have a policy of increasing network capacity when loading reaches 50 percent, so they are prepared to accommodate this kind of surge within their existing infrastructure.

Communities operating with satellite connections don’t have this luxury. With the high cost of satellite capacity, it is not practical to provide the same level of headroom on satellite links. Satellite link data rates are optimized for specific needs rather than adopting standardized link rates which are common in fiber networks. New solutions are required to address changes in traffic demands such as the COVID-19 crisis.

Increasing the satellite modem data rate only goes so far before transponder size becomes the limiting factor. Load balancing across multiple modems to support bonded data paths could be the next logical step provided you deploy a properly designed solution. The load balancer needs to know the link rates of the parallel paths to allocate traffic properly. Adaptive Coding and Modulation (ACM) has become widely adopted to deal with rain fades, but it results in variable data rates. Off-the-shelf routers or switches are designed for constant speed terrestrial links and there is no established standard to provide feedback from variable speed links. Without this information, the links need to include headroom to accommodate lower link speeds during rain fades, which leaves capacity unused most of the time.

Alternatively, if the link operates without headroom, there will be too much traffic when the link is impaired, leading to congestion at the satellite modem and resulting in poor user Quality of Experience (QoE) and degraded services. Worse, routing and signaling packets such as BGP could be discarded resulting in routers declaring the route unavailable, flapping or network instability. Interference can be different across multiple carriers leading to even more challenges when the links data rates don’t vary in concert with each other.

Increasing the satellite link bandwidth introduces another issue, the ability to fill such a large pipe. Demand for higher bandwidth is not just about increased number of users, but also the increased amount of content per user. Access to internet content largely relies on one protocol: TCP. TCP has two drawbacks. It is sensitive to delay, and to packet errors or packet drops. 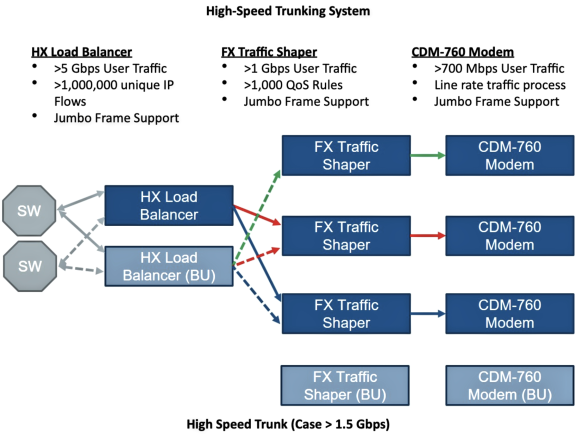 This is not a concern when the overall latency or delay between the client (end user) and the server (content provider, cloud application) is small, but can become a major issue that affects user experience — or QoE — when delay reaches 100 ms or more. Example, with a typical client to server delay of 350 to 250 ms GEO latency plus 50 ms network delay —– access + internet, the maximum user session achievable throughput will be 7 Mbps, but with packet errors of only 0.5 percent, the throughput will drop to 280 kbps. In today’s environment, simply accessing content is not good enough. To be deemed as “usable,” internet access must be fast and smooth.

Fortunately, there is a solution to these problems: adding a Protocol Enhancement Proxy (PEP) function. The purpose of the PEP is two-fold:

For these reasons, PEP is an essential function of any high-speed Internet access trunking solution over a latent medium such as satellite. The ideal solution would:

Operators need solutions that can deal with growing traffic demands and overcome the physical limitations of transponder size and rain fade in an efficient, cost-effective manner.

Networks have become more complicated. Operating at very high data rates requires that networking functions need to be distributed across multiple devices and those functions need to be tightly integrated to ensure high performance, reliability and a good QoE. The Comtech EF Data High-Speed Trunking Solution is comprised of:

Feedback of the modem ACM state to the load balancer and Traffic Shaper is critical in order to efficiently maximize the link fill rate in all conditions, especially on Ku- and Ka-band links where the link bandwidth can vary considerably. This link information is used by the HX Series load balancer to ensure that the links are loaded equally and by the FX Series WAN Optimizer to ensure that the QoS traffic shaping policies are applied accurately.

The link loading can vary significantly due to differences in long- and short-term traffic flows and variations in the compression rates of different traffic. The HX compensates for these factors by monitoring the individual carrier loading and redirecting traffic so that the carriers are equally loaded.

The FX Series’ shaping and queuing function prioritizes traffic using the QoS traffic type information carried in the packet header to ensure that the high priority traffic is protected even when the link is congested. When the FX Series appliance is connected to multiple modems through a HX load balancer, then the sum of the modem data rates is used to shape the overall traffic. The system uses Flow Aware Load Balancing to avoid packet re-ordering and minimize jitter. It also has the support of satellite links with different latencies and throughput capacities.

Today’s telecom networks have to service a variety of users, so the networks need to operate with a mixture of traffic types including “plain old internet,” mobile network backhaul (LTE) and Layer 2/3 VPN private network traffic. It is important to do this without requiring manual configurations so the systems should provide universal network support in a plug and play fashion.

Comtech EF Data had exactly this challenge with one of our customers. Telesat Canada needed to meet rising traffic needs of rural communities in far Northern Canada (see image above). The project needed to deliver 14 Gbps of capacity to 25 remote communities with speeds ranging from 80 Mbps up to 3 Gbps. The network would feed local DSL and 4G networks which required high bandwidth and optimized (TCP accelerated and performance optimized) broadband services. The services were to be provided using 3 beams on a Ka-band satellite.

Comtech’s solution is field-proven and has been successfully deployed with bonded links offering more than 3 Gbps of user traffic over Ka-band satellites. With the post crisis “new normal” world certain to include higher Internet traffic volumes, more and more operators will reach the limits of the existing satellite solutions.

David Burr is Vice President, Business Development for Comtech EF Data where he develops strategies and applications to address the maritime and satellite operator market verticals. Burr is passionate about the role of efficiency and its application to satellite communications technology and business models. As a 30-year veteran of the satellite communications industry, he previously served in various Product Management, Sales Engineering and Project Management roles at SES, O3b, New Skies, Polarsat, Comstream and GTE. Burr holds a degree in Electrical Engineering from Boston University.