Available for airlines in 2015 will be GX Aviation. This will be the first—and only—Ka-band network that will provide consistent coverage, delivering 50Mbps to aircraft, everywhere in the world.

Inflight entertainment (IFE) has come a long way—gone are the days of waiting an hour for a movie to be projected onto the bulkhead. Today, passengers want to watch live news as it happens or watch their favorite program when it suits them; video on demand has become the norm. People also want Internet access at the same speed they receive on the ground so they can stay in touch with the office, connect to social media, play online games, and make video calls if they wish—they expect all of these capabilities wherever they fly.

Passenger experience is an on-going competitive battleground and cabin connectivity is the latest frontier. Connectivity solutions have been around for some time but don’t yet replicate what we’re used  to using on the ground, in terms of speed, coverage and price.

GX Aviation: For The Future
GX Aviation changes the IFE paradigm—the technology will uniquely provide customers with the ability to deploy new types of solutions and services at a less expensive price, at a higher speed and with higher bandwidth.

Perhaps the most important element is that GX Aviation will be available across the globe. GX Aviation will offer the most extensive coverage of airline routes and the services in demand are all provided by a single operator, not a patchwork of service providers that’s been stitched together.

As you fly across time zones, passengers will have a continuous, consistent service as traffic is handed seamlessly across each spot beam, and from one satellite to another. Using GX Aviation, passengers can connect with their smartphones, tablets and laptops over a WiFi hotspot or onboard cell phone network, wherever they fly.

In addition, Inmarsat enables all of the operational and safety communications for the flight crew through the Classic services. An entirely new set of applications will become available with GX Aviation. We already know what some of them will be; many, many others will be developed, once GX is flying and people come to truly understand the potentials.

Some of the applications supported by GX include real-time TV and on-demand TV. High-speed broadband Internet access will provide much enhanced browsing, as well as enabling video calling and voice over IP.  GX Aviation will also provide enough bandwidth and capacity to replicate 4G cell phone services. In addition to the passenger applications, the range of flight deck and cabin crew applications that will be powered by GX Aviation are only just starting to be explored. 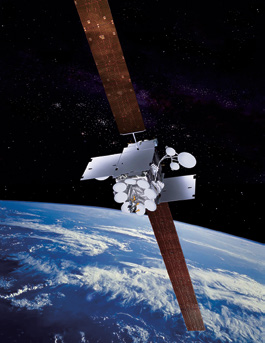 Technology Excellence
Inmarsat has been operating the most reliable commercial satellite communications network for more than 30 years and quality of service is fundamental to our business. For safety services and extra resilience, GX Aviation is complemented by Inmarsat’s Classic Aero and SwiftBroadband services on the Inmarsat-3 and 4 satellites, which deliver on average 99.9 percent network availability. This is the only satellite network that combines Ka- and L-band technologies.

Set For A 2015 Launch
GX Aviation is on track to be available to airlines during the first half of 2015 and the announcement of the first customer is imminent. The first satellite, covering the Indian Ocean region, is already on orbit and is currently undergoing onsite acceptance testing. The satellite is connecting to maritime terminals with great success and is on track to start a regional service in Q3 of this year.

The second satellite is being readied and will ship to the launch site in Baikonur, Kazakhstan, in Q2 2014 for subsequent launch. This satellite will cover the Atlantic Ocean region and the Americas and is scheduled to be in service by January of 2015.

F3 will complete the constellation, covering the Pacific Ocean region and has completed the mechanical environmental and thermal vacuum testing at Boeing’s El Segundo facilities in California. F3 is scheduled for launch during late summer and is due to reach its final orbital position by the close of 2014.

Each satellite is served by two ground stations, the first two operational, with the others being on track to meet the satellites’ needs when they are launched.

Honeywell is responsible for the development and production of the GX Aviation avionics. Following the completion of the successful Critical Design Review in February, the program has entered the production phase. Honeywell has signed an agreement with Air China to test GX Aviation on the carrier’s A330 aircraft during the second quarter of 2015.

What’s Next?
GX Aviation is available to airlines through a range of partners, including Gogo, OnAir, Rockwell Collins and Thales. They have all been talking to airlines around the world and the announcement of the launch airline customer, as stated earlier, is imminent.

Once the constellation of satellites is flying and operating, early next year, the next major step will be having passengers use the power of Inmarsat’s global Ka-band network. GX Aviation is coming to an airline near you quite soon.

Business Aviation—Jet Connx
For business travelers, picture this—you’re on your laptop, checking your latest stock price. Every now and then you look up to catch the live news on TV. In between, you’re looking at the weather forecast on your smartphone. Seconds later, it rings. It’s your daughter wanting to know if you bought the cinema tickets for the weekend. You haven’t done so—you book online while you’re talking and cruising at 5,000 feet over the Atlantic in your business jet.

All this will happen with JX, which will uniquely provide customers with the ability to deploy new types of solutions and services at a cheaper price, at a higher speed, with higher bandwidth and truly global coverage. You will connect to JX with your laptop, tablet and smartphone over your WiFi system from the moment you step on board, wherever you fly.

JX will allow you to do all the same things you would back at the office, even hold a videoconference while you’re flying. Or if you’d rather kick back and relax, you can download a movie or watch the game live at the same time as you would back at home. Inmarsat also enables all the operational and safety communications for your pilot—this is one solution you will want on board.

As you fly across time zones, you’ll have a continuous, consistent service as traffic is handed seamlessly across each Inmarsat satellite, and from one to another. Services will be delivered over the company’s nexgen of satellites, the Inmarsat-5s.

The first satellite was successfully launched in 2013, providing coverage over Europe, Middle East, Africa and Asia. The second satellite will cover Asia-Pacific and full global coverage is planned for the end of 2014.

For information regarding GX Aviation and Jet Connx, visit
http://www.inmarsat.com/about-us/our-satellites/global-xpress/gx-aviation/