3DTV Isn't New
All of the content industry is currently talking about the arrival of 3DTV. However, three-dimensional video is nothing new.

The first 3D cinema productions made their appearance as early as the 1920s. The 1950s represented the golden age of 3D, with more than one hundred films produced using anaglyph technology (color coding). Following a drop-off in the 60s and 70s, 2D anaglyph made a comeback in the 1980s. 3D returned at the end of the 2000s — this time in digital format.

Thanks to digitization, movie theaters are already becoming “3D-ready.” Now households are expected to get equipped with 3D screens (TV sets, computer monitors).
There are two types of screens that can read native 3D images:
Multiscopic screens are expected to eventually replace these technologies, since they do not require glasses and overcome the disadvantages related to where the television viewer is sitting during viewing.

Why Three Formats?
The entire entertainment industry (TV, movies, games) is now HD-ready (cameras, studios, post-production, mobile television studios, etc.). For the time being, given the economic situation, it appears the industry will not be investing in 3D equipment in the near future. Most of this technology (for example, cameras) is not even available yet and industry players believe that HD equipment is nowhere near fulfilling its potential.

Technically speaking, in order to acquire a three-dimensional image right now, production teams must use a combination of two HD cameras (left and right lens). Then, they use the existing upstream technical chain to manage the two HD streams. Without consulting with one another, industry players have implemented several techniques (or formats): 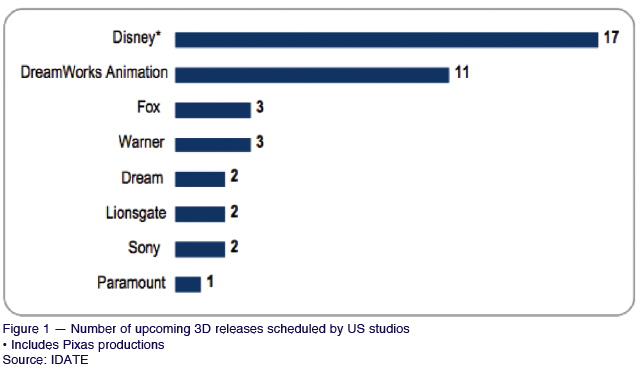 3D film production is booming, propelled by animation and Hollywood. In the United States, three-dimensional cinema is developing rapidly and about 30 films were slated for distribution in 2009, primarily in the animation and horror genres. Theaters are also expected to see an increase in alternative 3D content. More and more screenings are dedicated to content other than full-length feature films. Since this content is usually event-based in nature (operas, concerts, sporting events, etc.), it is broadcast live.

Video games could also boost the adoption of 3D. Although there are very few native 3D games available today, there are about 300 “3D-Ready” video games on the market. Many systems, like the NVIDIA technology, allow users to upconvert 2D games to 3D. But we will undoubtedly have to wait for the next generations (between 2011 and 2013) for console manufacturers to harness the 3D phenomenon.

What Impact For Satellite Players? 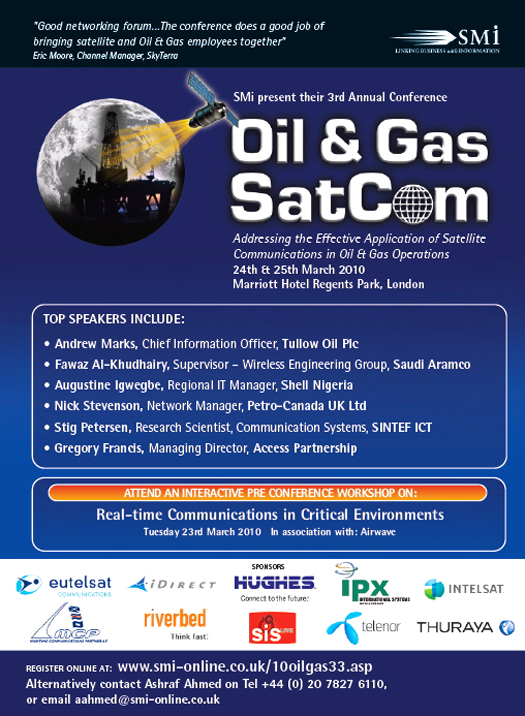 Today the size of the stereoscopic 3D television stream is the largest in the market — up to twice as large as HD. What’s more, the future autostereoscopic, or multiscopic, format can be encoded at up to 100 Mbps. In reality, there is no limit, as the encoding depends on the number of views, even if the bandwidth required for distribution (or projection) remains a critical factor.

For all TV networks, compression level remains the key factor in the development of 3D at home. The higher the content encoding, the more bandwidth is required for distribution, thereby limiting the number of channels that can offer broadcast 3D programs and the number of households eligible to receive these channels (in multicast).

The idea is to reduce the size of the content by playing with the compression level. But the appeal of 3D is based on image quality. Consequently, the compression level for this type of content should be taken into consideration, especially in the 3D development phase, since the goal is to offer quality programming. In addition, in order to stay compatible with 2D, the 3D stream cannot be compressed too much. It is estimated that a 2D-compatible 3D stream requires 60-80 percent more bandwidth than with HD.

Spectrum capacity varies depending on the network, which has an effect on the capacity available for the transmission of broadcast 3D (and also the transmission of simulcast SD and HD channels). Therefore, it is clear that certain networks will not be able to transmit this type of programming without reallocating their frequencies. 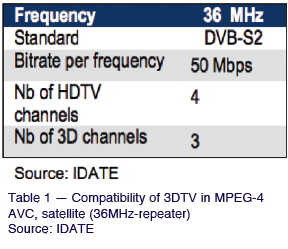 As far as broadcast networks go, satellite still boasts the largest transmission capacity. In addition, the initial 3D tests were conducted on satellite platforms, much like the initial HD tests. A 36 MHz-repeater can obtain a usable data rate of 50 Mbps (DVB-S2), offering the ability to integrate fifteen SD digital channels, four HD channels or a maximum of three 3D channels, depending on the digital compression used.

The first 3D commercial service will be launched by BskyB in 2010 using its capacity leased on Astra satellites. The service is expected to offer a mix of movies, entertainment and sports programs. The goal is to use existing infrastructure and to target its 1.3 million strong HD subscriber base.

BSkyB is counting on a steady stream of 3D films in the pipeline, its own internal productions (it is even creating a 3D catalog) and partnerships with other operators interested in being featured on the service.
Deterred by the excessive cost of active glasses systems, Sky is taking a pragmatic approach and focusing on launching services quickly using lower-cost technologies already available on the market.

Sky affirms that the investments made to broadcast in HD have been a major asset. Indeed, making the jump from HD to 3D will be much less costly for Sky than the corresponding jump from SD to HD. The only new requirement is a 3D-ready screen, since the Sky+HD box is 3D-compatible with only minimal modifications.

The IDATE report provides a complete inventory of the current state of the market — presenting technical solutions, trials that are underway and pioneer commercial developments. It also offers 3D rollout scenarios up to 2015. 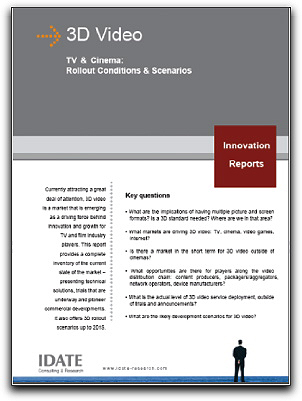