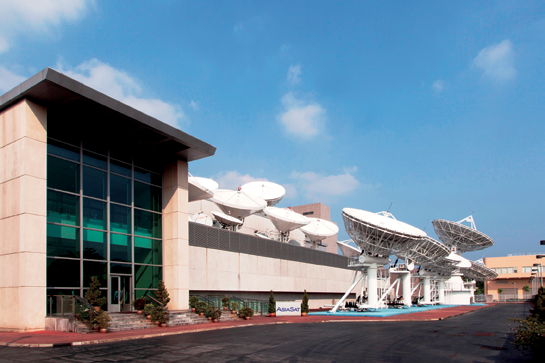 Traditionally, the terrestrial applications were microwave links providing connectivity for a limited numbers of stations at fixed, well defined locations and using directional antennas with controlled emissions and well-designed ground equipment. However, the new applications, which now are threatening C-band Fixed Satellite Service (FSS), are different in nature in that they are deployed ubiquitously, using non-directional antennas and often without individual licensing of stations, in particular user terminals.

For example, for some terrestrial communications, instead of having their antenna pointing down on the surface and improving isolation to building tops, terrestrial operators choose to put their antennas on high grounds to service wider coverage. These terrestrial applications no longer have a sharing desire (co-exist) but a ground strategy to dominate the satellite FSS C-band frequencies.

There are two different groups of new terrestrial applications that are threatening C-band satellite networks. These groups are principally different in the way they are introduced and authorized by administrations.

Each of these groups encompasses several types of applications and technologies. The groups discussed are:

Out of these groups, it may be the IMT/LTE applications that have caught the most attention lately. However, very few networks in this group have been implemented and, as of today, the numerous interference cases encountered mainly stem from BWA/WiMax types of applications. 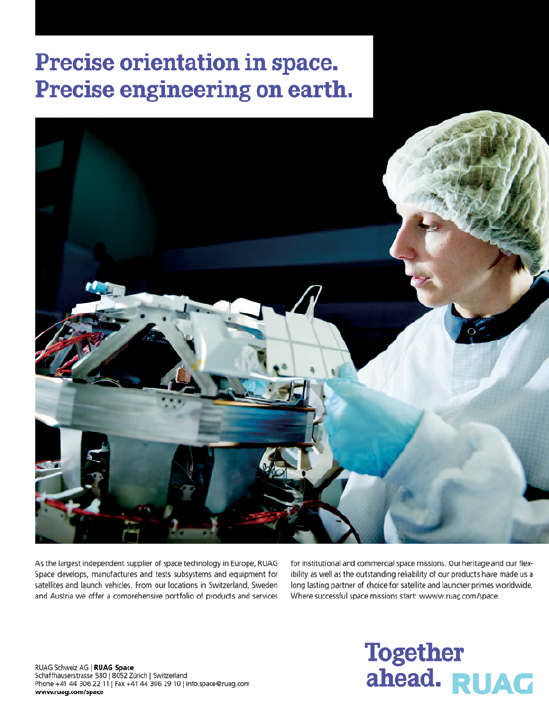 Broadband Wireless Access (BWA) / Fixed Wireless Access (FWA) / WiMax systems encompass a range of systems, normally aimed at providing broadband Internet access to groups of users through what might be seen as a large-cell WiFi system. User terminals are fixed, nomadic or mobile and deployed ubiquitously.

BWA networks are seen introduced country by country, in direct contact with individual administrations, without any involvement of ITU or World Radio Conferences, and with no particular mention in the Radio Regulations.

Currently, in the Asia-Pacific region, BWA is seen introduced predominantly in the 3.4-3.6 GHz band. Nevertheless, the interference from BWA operating in this band has been the main source of terrestrial interference for reception in the entire C-band1 with many cases of interference leading to outages and loss of service for many customers.

IMT is a generic term used for mobile networks adhering to certain ITU standards and can operate in several frequency bands. The ones considered for C-band are in the IMT Advanced category and are foreseen for high capacity, providing 100 Mbit/s connections for handheld user terminals and 1 Gbps for nomadic user terminals. Practical implementation is forecast for around 2020.

Some WiMax networks are operating within the IMT standards and are seen to bring a significant overlap between the BWA and IMT types of networks. However, in terms of how these networks are recognized and introduced, the approach is completely different.

While BWA networks are introduced country by country, completely outside ITU and without any particular recognition in the Radio Regulations, IMT has become the subject for specific agenda items of World Radio Conferences (WRCs) to identify specific frequency bands for IMT. Furthermore, several ITU-R Recommendations and Reports are seen to have been developed, describing IMT technical standards and compatibility with other services.

As a result of these studies; when WRC-07 (Year 2007) identified the 3.4-3.6 GHz band for IMT in some countries, power flux density (pfd) limits were imposed at the borders of these countries to protect FSS in neighboring countries. This is a very important element of the IMT identification and is very different from non-IMT BWA where no such pfd limits exist.

In the preparations for WRC-15, several players on the mobile side have advocated lifting these pfd limits and, certainly, when considering additional parts of C-band downlink for IMT they would not like to see the same pfd limits applied.

In terms of interference into FSS reception, IMT is very similar to BWA. ITU studies conducted in preparation for WRC-07 and new studies conducted in preparation for WRC-15 show that in respect of in-band operation, separation distances, when taking into account the short-term quality objective for FSS, in the order of 100–500 km are required for regular outdoor macro-cell IMT deployment.

If IMT is confined to low-power indoor deployment only, the separation distances are reduced to about 5 to some tens of km (120 km in one study). It can thus be seen that by deploying IMT in an area, vast areas around become unusable for FSS reception. This also illustrates the importance of pfd limits at the national borders as currently in the Radio Regulations for the 3.4-3.6 GHz band, such that as a minimum, FSS is protected in neighboring countries.

So far, FSS friendly countries and FSS operators are working very hard to propose “No Change” (NOC) in the C-band since the sharing studies have again demonstrated that the coexistence of the IMT service with FSS, in the same geographical area is not feasible. It should be emphasized that C-band is heavily used for satellite communications throughout the world for a multitude of services including very small aperture terminal (VSAT) networks, Internet services, point-to-multipoint links, satellite news gathering, TV broadcasting to satellite master antenna television (SMATV), direct-to-home (DTH) receivers and feeder links for mobile satellite service. 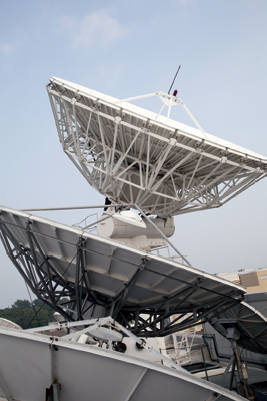 The wide coverage of satellites in C-band enables services to be provided to developing countries, to sparsely populated and geographically remote areas and over large distances (e.g., providing program content and data distribution between continents). Due to its ubiquitous coverage, high availability and instant connectivity, C-band FSS plays a key role on the socio-economic development of many countries to provide vital services and is also crucial for disaster relief operations.

This band is also used by governments in conjunction with international commitments; for example, the World Meteorological Organization (WMO) uses this band to distribute meteorological data throughout the world and maritime and aeronautical safety related information is relayed through stations operating in this frequency band. Furthermore, due to its lower frequency, in particular in regions characterized by high rain attenuation, C-band is the only realistic satellite band where FSS services can be provided with high availability.

The current use of C-band by BWA is causing significant interference and disruption of satellite networks. Further identifying C-band for IMT would mean even more disruption to all these vital services which would have a huge impact on the socio-economic development of many countries. To protect the vital FSS services operating in C-band and to avoid the detrimental impact due to the loss of these, it is instrumental that WRC-15 says no to any further IMT identification in C-band.

3. What Can Be Done To Reduce The Effect Of Interference From BWA/IMT?

1. Take into account the usage/license situation when deploying a new service
To avoid interference from BWA/IMT, it would be beneficial to take into account the usage/license situation in the countries and its neighboring countries where C-band FSS services are intended to be deployed to identify the best appropriate frequencies or select the appropriate site for reception antennas.

There are two reports developed in APT (Asia-Pacific Telecommunity) which provide an overview of the usage of the 3.4-3.6 GHz band in the Asia-Pacific area as reported as of 2014 (No. APT/AWG/REP-37 [Rev.1]) and the information of mobile operators’ frequencies, technologies and license duration in Asia-Pacific countries as of 2015 (No. APT/AWG/REP-15 [Rev.2]), the latest version of these reports can be downloaded in www.apt.int/AWG-RECS-REPS.

In addition, the individual market summaries in www.casbaa.com/regulatory/satellite-issues/c-band-invasion is also a very good reference source. 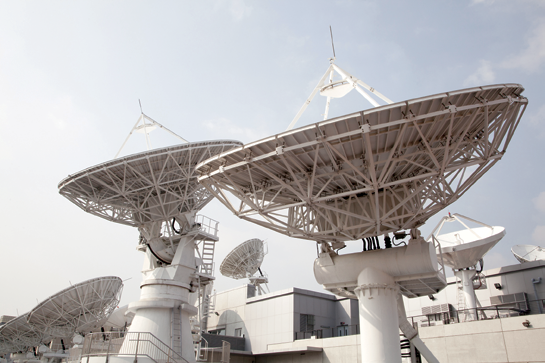 AsiaSat’s presentation material provides some general guidelines for identifying the potential FSS Earth stations to be registered and suggestions on how to minimize the number of Earth station registrations, without compromising on the required protection levels. Registration of C-band Earth Stations to Acquire Protection from Terrestrial Interference [download].

Satellite LNAs and LNBs are designed for reception of very low satellite signals and the dynamic range is set accordingly. BWA or IMT signals can produce much higher power (e.g. 45dB higher) than the satellite signals at the LNA/LNB input and can thus overdrive or bring it into non-linear operation. This can block reception of signals anywhere in the entire 3 400-4 200 MHz band, even if the terrestrial signal is not overlapping with the FSS signal.

To avoid LNA/LNB overdrive from BWA/IMT, it may be possible to install pre-LNA/LNB waveguide filter. The filter should have:

According to our experience, an integrated filter with the LNB cannot provide the same levels of rejection as an external filter. An external filter is therefore recommended.Some typical filters:
www.microwavefilter.com/7893_chart.html
www.norsat.com/product/c-band-band-pass-filter-2/

4. Report Any Interference To Your Satellite Operator Or Local Regulatory Authority

If your C-band FSS service receives interference from BWA/IMT, it is very important to report that to your local regulatory authority and/or satellite operator as soon as possible so that they can take action. Your incident report will also serve as valuable information for the satellite friendly countries and satellite operators in the battle to defend C-band spectrum for FSS.

1Adjacent band interference, which is caused by out-of band emissions of BWA transmitters and/or BWA emissions overloading the FSS receivers, bringing them into non-linear or saturated operation.