Only six months have passed since my article The Continued Rise of CubeSats was published in the July/August 2015 issue of SatMagazine. 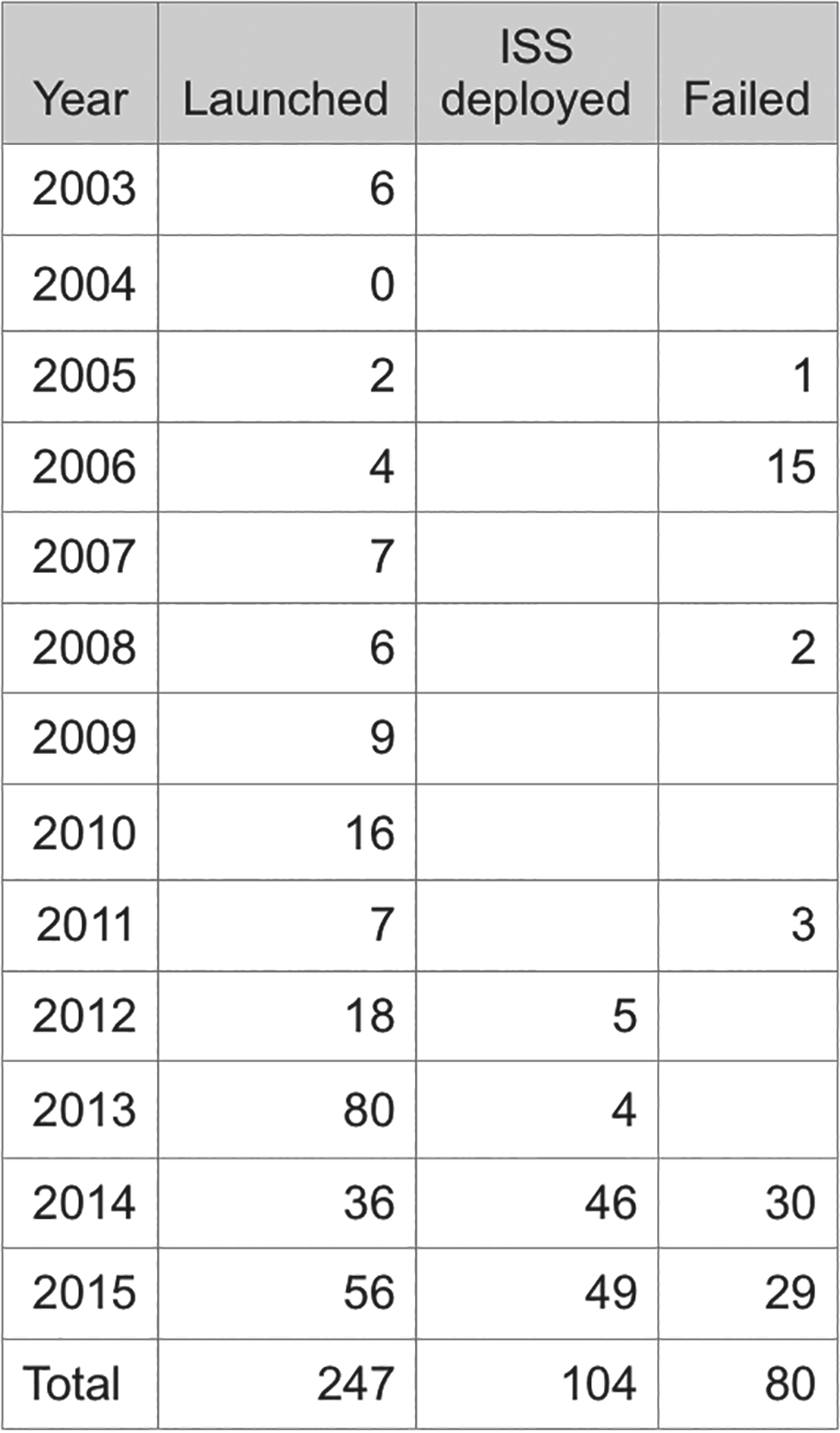 That feature discussed CubeSats and already many things have changed in the exciting world of CubeSats, also nowadays called smallsats.

The number of these satellites launched or deployed since that previous article has also risen dramatically, in particular as the result of an Atlas V launch on October 8, 2015. Unfortunately, the number of failures have also increased due to the failure of the first Super Strypi launch on November 4, 2015. Table 1 below does not include 18 CubeSats that remain on the International Space Station pending deployment, as of this writing.

Aquila Space + Astro Digital
The 1U CubeSat is now forming the basis for larger platforms as demonstrated by two recent proposals for Earth Observation (EO) constellations that are expected to take off this year.

Aquila Space and Astro Digital, two San Francisco based companies, will establish the Landmapper constellation of 30 EO satellites. The constellation, to be launched starting in 2016 over a four year timeframe, will be comprised of ten Broad Coverage (BC) satellites and 20 High Definition (HD) satellites. The project aims to increase the supply of imagery available to customers that are currently users of Landsat data by providing higher resolution imagery on a more frequent basis than provided by Landsat.

The Landmapper BC satellites are based on Aquila’s Corvus-BC platform, a 6U CubeSat which will carry a payload that will provide imagery in the red, green and NIR spectral bands at a resolution of 22 meters. 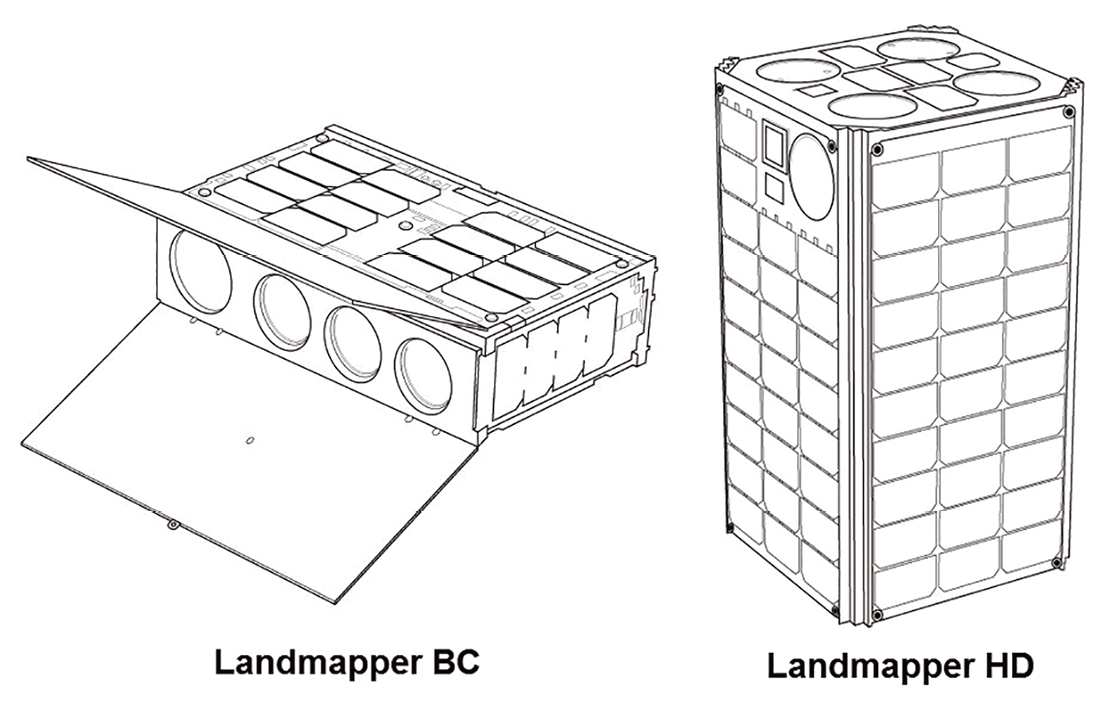 The Landmapper-HD is based on Aquila’s Corvus-HD platform, a 16U CubeSat unit that will carry a payload with a resolution of 2.5 meters,  operating in the blue, red, green, near-infrared and red-edge spectral bands.

Operating from an altitude of 600 km, the constellation will provide updates every three to four days.

Hera
California based Hera Systems hopes to establish a 48 CubeSat EO constellation to provide daily imaging services with a resolution of 1 meter. The launch of the first nine satellites is expected to occur in late 2016.

While Hera was originally considering satellites in the range of 50 to 60 kg, ultimately selected was a 12U CubeSat platform. 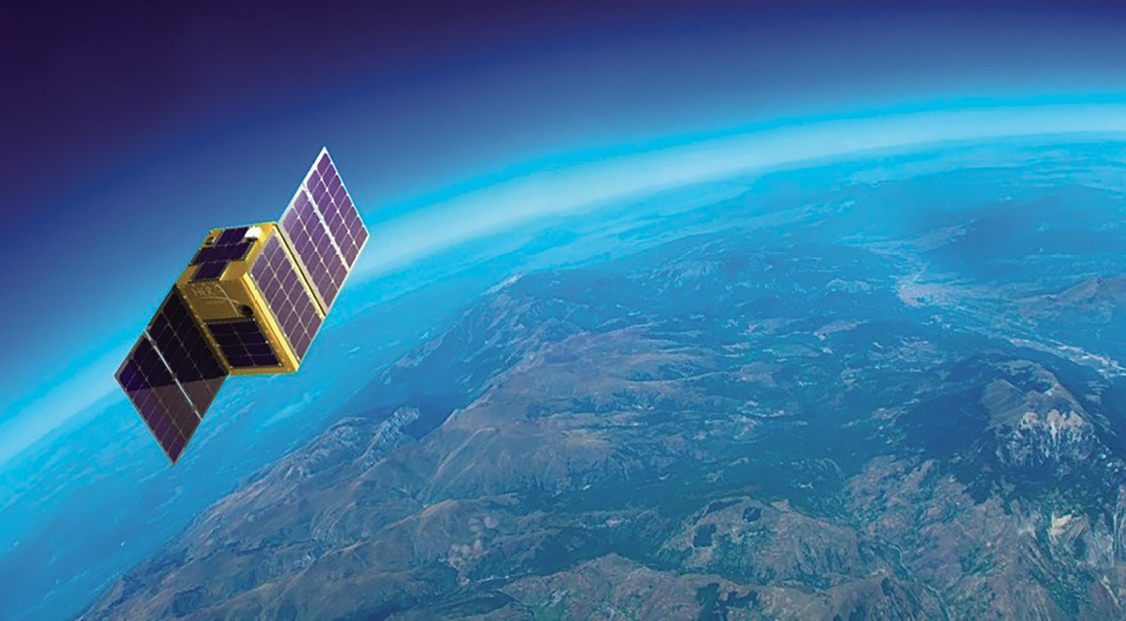 The acceptance of even smaller satellites, the 5x5x5 centimeter PocketQubes, is also spreading quite rapidly.

PocketQube Unicorn
The European Space Agency (ESA) is funding a double PocketQube for a trial that will relay data from a geostationary satellite to a satellite in  Low Earth Orbit (LEO) of 620 kilometers in cooperation with Avantin UK. Identified as Unicorn-1, the 400 gram satellite will be fitted with an S-band ISL radio. Launch will take place in late 2016, with Unicorn-1 as one of the payloads on the Dnepr launch vehicle that will place the Unisat-7 in orbit.

There are also a number of other projects using PocketQubes that include several amateur satellite builders, such as the OzQube project which was described in the June 2015 issue of SatMagazine.

CZ6
In one of the more interesting developments of the latter half of 2015, the first launch of China’s CZ 6 launch vehicle occurred on September 19, 2015. This launch carried a number of small satellites, demonstrating first of all that China has the capability to build these small satellites, and, secondly, that these small satellites would not necessarily follow the 10x10x10 centimeter CubeSat pattern to the letter. 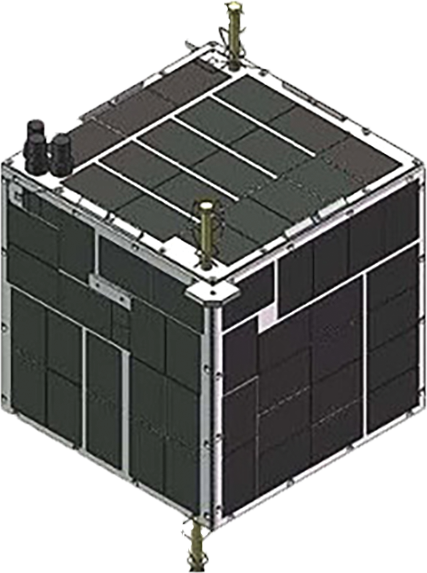 Two of these were built by the Zhejiang University as Zheda Pixing (ZDPS)-2A and -2B. Each of these satellites measured 25x25x25 centimeters and possessed a mass of mass of 12 kg and demonstrated advanced guidance, navigation and control algorithms for formation flying, evaluation of the performance of an ammonia, micro-propulsion system as well as to test a dual-frequency GPS receiver.

ZDPS-2
On board CZ 6 were also a series of XiWang (XW) -2 series of small satellites, which have also been referred to as Chinese Amateur Radio Satellite (CAS)-3 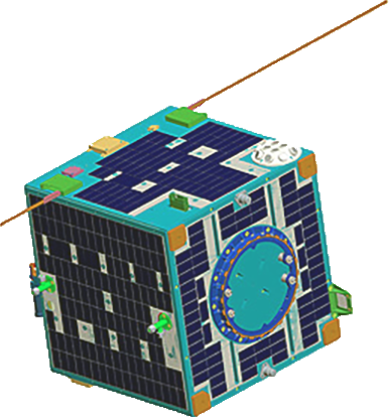 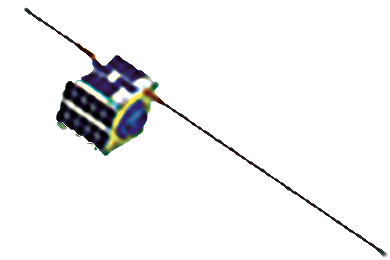 Also known as DCBB, XW-2G was a 2U CubeSat built for educational purposes by Shenzhen Aerospace Dongfanghong HIT Satellite Ltd. together with CAMSAT.

Also known as Zidingxiang-2 and LilacSat 2, XW-2H was a 20x20x20 centimeter satellite with a mass of 11 kg designed for education, amateur radio communication and technology demonstrations. This satellite was built by a team of students from the Harbin Institute of Technology (HIT) and carried a radio amateur transponder as well as a thermal infrared camera. Akso tested aboard this satellite was new software.

Tiantuo-3 was a 20 kg technology satellite built by the National University of Defense Technology. This craft was also known as Luliang-1 and the satellite tested an AIS payload for ship tracking as well as an ADS-B (Airplane Data Relays) system. In addition, Luliang-1 ejected the XiWang (XW)-2I satellite, which was also known as the Chinese radio Amateur Satellite (CAS)-3I, Zhineng hao shouji weixing, NUDT PhoneSat and Kaituo-1B. XW-2I was a satellite with a mass of 1 kg and was based on smartphone technology, and was also developed by the National University of Defense Technology.

The satellite carried and deployed four Xingchen (XC) satellites which had a mass of 0.1 kg and measured only 98 x 98 x 7 mm. They were used in an experiment to control a cluster of satellites using intersatellite communications, although the formation flying was not possible as the Xingchen satellites did not have propulsion systems. Two were controlled by Tiantuo-3 and two by XW-2I. 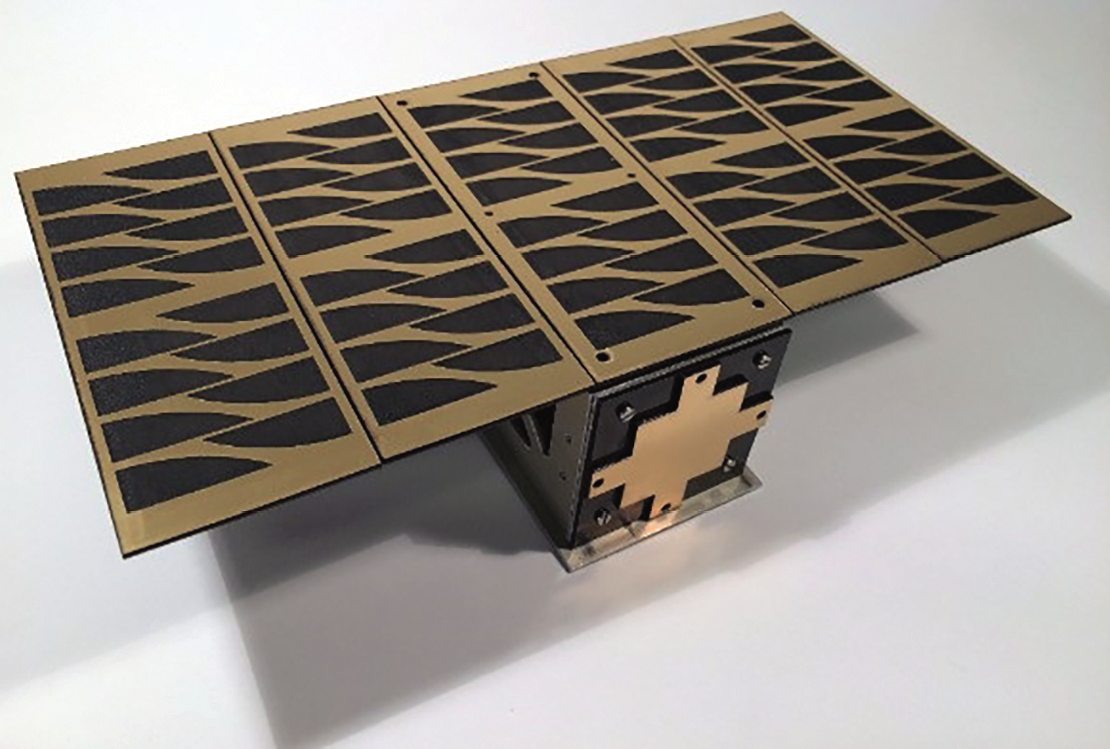 The PocketQube Unicorn. Image is courtesy of European Space Agency.

Zijing (ZJ)-1 was a 234 gram picosatellite developed at Tsinghua University to evaluate micro CMOS cameras and MEMS magnetometers, as well as formation flying on tethers with KJSY-1 and intersatellite communications.

Kongjian Shiyan (KJSY)-1, was a 173 gram picosatellite jointly developed by Tsinghua University and Xidian University to test formation flying on tethers with ZJ-1 as well as intersatellite communications and GaN
electronic boards.

Of significant note is that the four XC satellites, as well as the ZJ-1 and the KJSY-1, did not receive an International designation. Such indicates that either these satellites were not deployed or, and this is more likely, they were too small to be effectively tracked as individual spatial objects.

As if to prove a point, the first CZ 11 launch on September 24, 2015, places three CubeSats in orbit. Tianwang (TW)-1A, -1B and -1C were 2U CubeSats developed by the Shanghai Engineering Center for Microsatellites (SECM) in collaboration with Nanjing University of Science and Technology (NJUST), Denmark’s GomSpace, Portugal’s Tekever Space and Sweden’s NanoSpace. These were to undertake a range of networking experiments that involved a small constellation of low-cost satellites. On this flight, they tested the GAMALINK intersatellite communications technology.

In the field of launch facilities, and recognizing the need for easier access to space to facilitate the launch of the many anticipated CubeSats, NASA recently awarded launch contracts to three firms for the deployment of small satellites such as CubeSats. 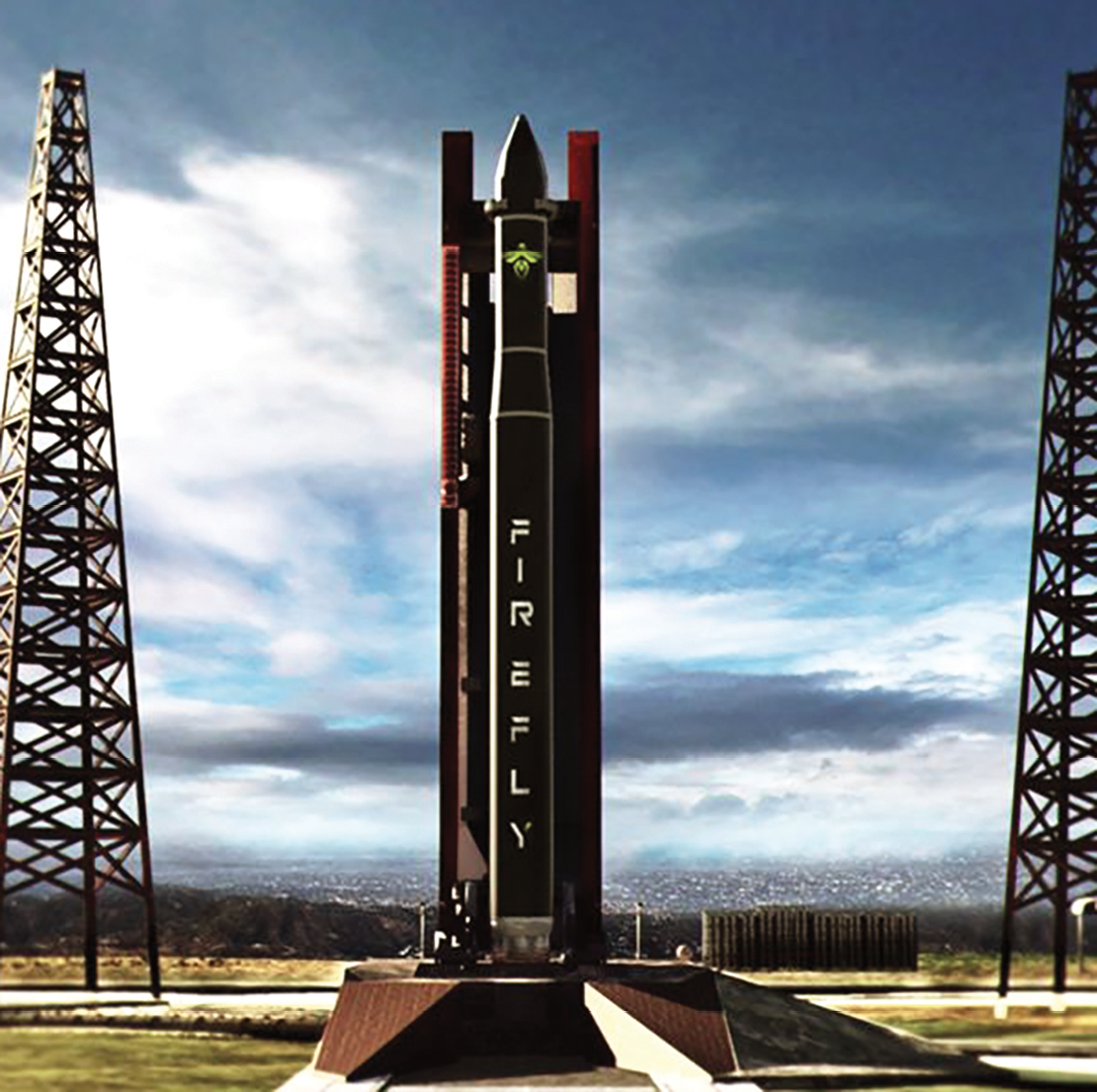 Ventura Class Launch Services
Identified as the Venture Class Launch Services program, the contracts have been awarded to Firefly Space Systems with the Firefly Alpha, Rocket Lab USA with the Electron, and Virgin Galactic with LauncherOne. None of these launch vehicles have flown as of this writing, and the program envisages the first test flights to occur before April of 2018, with each flight carrying payloads ranging from 45 to 90 kg.

Firefly Alpha
Separately, and recognizing that a few extra kilograms on a launch vehicle really does not have any impact on the cost of a launch, United Launch Alliance (ULA) has now decided to offer six, free, CubeSat rides on two Atlas V launches in 2017.

The company committed to this program in their bid to tap into the growing market of smallsats, as the company plans to place a standard CubeSat carrier with as many as 24 berths on the aft bulkhead carrier, bolted to the rear end of the Centaur upper stage. This location will prevent interference with the launch’s main payload and the CubeSats will be spring ejected. ULA’s intention is to also  place a similar device on the future Vulcan
launch vehicle.

CPOD
Tyval Nano-Satellite Systems has proposed the CubeSat Proximity Operations Demonstration (CPOD) mission to demonstrate the rendezvous, proximity operations and docking of two 3U CubeSats. Sponsored by NASA’s Small Spacecraft Technology Program and Space Technology Mission Directorate, the techniques to operate two satellites in close proximity to one another other is seen as enabling on orbit inspection and servicing of satellites and to allow multiple satellites to operate together in space. 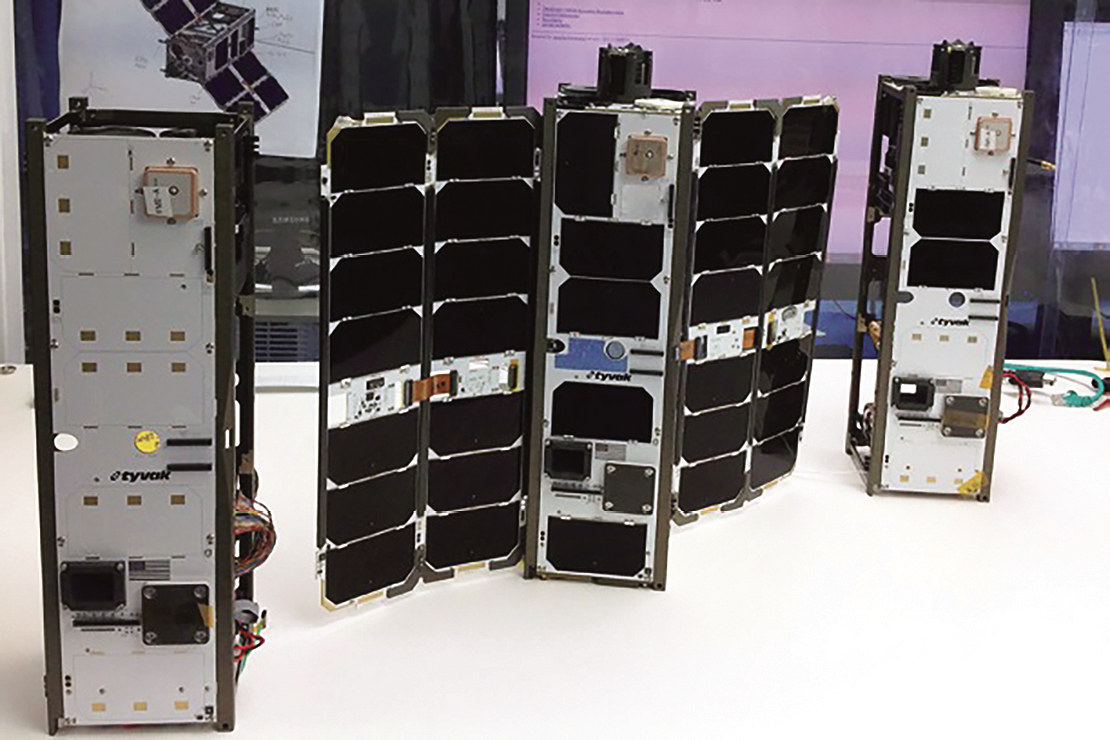 To be launched in 2016, the two CPOD CubeSats will be placed in a common orbit. They will maintain an intersatellite link to share data. Many of the operations will be performed autonomously using on-board processors and flight software for guidance, navigation and control. Using on-board navigation systems, one of the satellite will perform a series of circumnavigation maneuvers relative to the other satellite.

The long term application of this technology is targeted toward the field of debris inspection/removal, resupply, spacecraft inspection, along with formation flying activities as an extension of the host satellites.

CubeSat Operational Concerns
With the number of small satellites released in what are often considered random orbits that are determined by the principal payloads, NASA has reported that one out of every five CubeSats launched between 2003 and 2014 is in violation of international guidelines that call for satellites to deorbit—by force of nature or their on-board systems—within 25 years of retirement. CubeSats operating in orbit below 600 km are expected to meet this 25 year deadline; however, those in higher orbits may exceed that deadline. 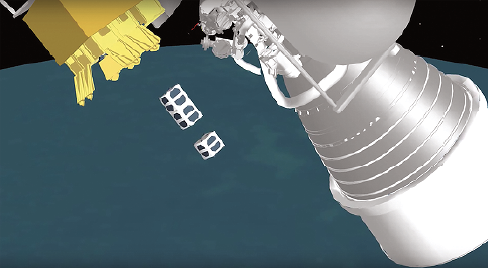 While the proposed OneWeb satellites, with a mass of 150 kg, are not considered nanosatellites or smallsats, it is easy to see that similar problems could occur with CubeSat networks.

The emergence of commercial CubeSat constellations has caught big operators ‘with their pants down.’ For instance, the U.S. National Geospatial-Intelligence Agency (NGA) hopes to request funding to begin experimenting with the various imagery products that are becoming available from a new generation of commercial satellite operators and data analytics firms.

Considering that Planet Labs, with its Flock constellation, has been operating now for close to two years, it becomes clear that the large agencies, such as NGA, are in a disadvantaged position and have been too slow to react to the rapid advance of the CubeSat and smallsats, in general. Now is the time all must catch up with v technologies. 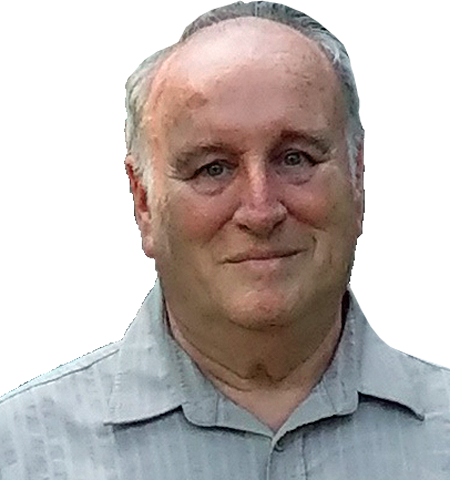 Jos Heyman, a retired accountant, is the Managing Director of Tiros Space Information (TSI), an Australian consultancy specializing in the dissemination of information on the scientific exploration and commercial application of space for use by educational as well as commercial organizations.

Jos has more than 40 years of experience in the historical aspects of astronautics and is the editor of the TSI News Bulletin.