During my early years in SATCOM, I often became restless being another cow in the herd of night-shift bench techs spending my nights following mundane tuning procedures or scanning countless PCBs for solder-bridges and incorrectly oriented components, all the while wishing I was out partying with the rest of my generation. To call it a “structured environment” would be an understatement, as everyone on the production floor was expected to function in unison — like a mass of symbiotic organisms sharing the same vital organs and controlled by a loud, screeching buzzer that paved the only sanctioned exit from my assigned duty station. 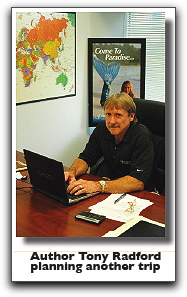 Hearing that irritating screech announcing the beginning of my ritual 10 minute reprieve from the night’s mind-numbing duties, I would head for the break room and congregate with the other techs around powdered donuts and sticky-buns (way back when my metabolic-rate allowed such luxury), where we would collectively plan our escape from this insidious existence. I can still remember gazing starry-eyed over the proverbial fence — the greener grass beckoning me to leave the shackles of SATCOM and join the quest for the golden ring — a new existence laden with a clear path to fame and fortune, or at least an office with a window.

Then one night it happened — there it was on our internal job-post bulletin board, displayed seductively over the drinking fountain. “Field Engineer needed for International SATCOM Division – requires extensive world travel.” My juices immediately began to flow as my brain constructed a fantasy comprised of exotic ports-of-call and a whole new set of experiences that were hardly visible from the confines of my tiny cubicle and hamster-wheel ruled life.

Fortunately for me, my technical experience was supplemented with years of service in various blue-collar trades, the combination of which positioned me well to become an Earth station installer, a global mercenary — a rookie member of an elite society of field-hardened nomads with the elemental resilience of Rambo and ingenuity of MacGyver. So I tossed my tweaker and embarked on an adventure into a new world.

Unlike today, international travel in the 80’s was much easier and a bit more respectful. Though carrying weapons and incendiary devices onto a plane was certainly frowned upon, it was unlikely you would be groped or tackled for possessing such sinister items as toothpaste or bottled water. Come to think of it, back then, I don’t think they put water in bottles.

As I hadn’t traveled much outside of the southeastern U.S., it’s fair to say that my knowledge of international culture and protocol was slightly less than mature. But here I was — heading out to make my mark on the world, armed with a new mission, an impassioned spirit, a sense of adventure and that all important corporate credit card — ready to tackle whatever trials and tribulations were tossed my way.

The years that followed led me to countless locations abroad — Asia, Latin America, Middle East, Europe, Africa and the untamed wilderness of Alaska. Due to the nature of SATCOM and its irresistible appeal to under-developed geographic regions, many of my destinations were of the sort that failed to make travel magazines’ list of top vacation spots. 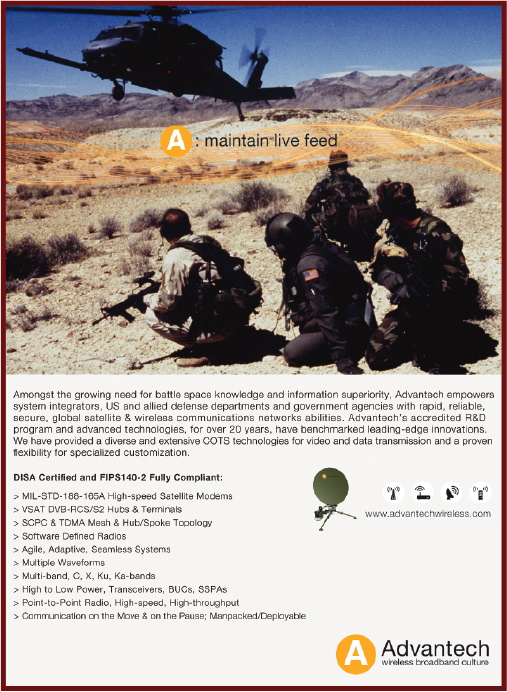 Though ripe with adventuresome appeal, there were, of course, the pitfalls that shadow trips to locations far from the reaches of five-star hotels and void of tourist glamour — those remote locations where ingestion of the local cuisine should only commence after close scrutiny and the following of a few simple, though unwritten, rules. On the other hand, Jenny Craig couldn’t touch Montezuma’s revenge when it comes to rapid weight loss. Of course, you can send Jenny away when you’ve had enough, but giving Montezuma the boot requires nothing short of a gastronomical exorcism. And “Lord help me” if someone occupies the isle seat between me and the plastic throne of relief.

Ah, but every foreign excursion ends with an eventual homecoming and one last hurdle — to traverse U.S. Immigration.

My local airport is home to a pair of beagles, four-legged members of the Homeland Security Team that includes Linus — trained to detect illegally imported food items, and Remi, who searches for large amounts of undeclared currency. Both of these intrepid, four-legged sniffers could be seen regularly in the international baggage claim area, dragging their human assistants around the carousels, winding and weaving through the bags of returning travelers in search of contraband.

On one of my trips abroad, I became addicted to delicious praline-covered peanuts I purchased from a foreign market. I mean, really addicted! My desire was to continue to support my addiction, or at least to delay a cold turkey withdrawal until such was unavoidable. 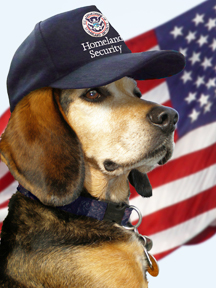 I packed a couple of pounds in my carry-on bag. After sailing through passport control, I proceeded to baggage claim and waited for my checked bag to appear. Through the corner of my eye, I could see a tail wagging above the sea of suitcases piled about the floor. Oh no! Linus! My heart raced as I watched each bag on the carousel pass before me, praying that mine would appear and allow me to exit before being discovered carrying illegal booty and herded down the dreaded “red line.” The passing minutes seamed like hours as Linus headed my way. In my brain I could hear Glen Fry singing lyrics from “Smuggler’s Blues”. 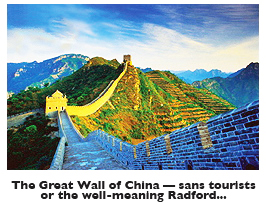 Fortunately, and as luck would have it, a curious aroma seeping from the bag of a Colombian tourist sent Linus into a drooling frenzy, causing the distraction I needed to escape the scene. 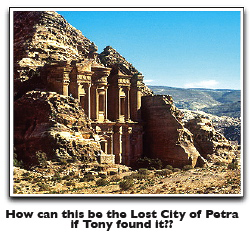 On a serious note (and I’ll try to keep such to a minimum), many of the places I visited could claim some intrinsic beauty. Whether it be cultural, geographic, or historic, something worth seeing or doing was typically within reach of the visiting traveler once the mission was completed. From the Great Wall of China to Jordan’s Lost City of Petra, spectacular experiences provided contrast to Montezuma’s intestinal wrath.

Other locations, seemingly unable to support human life, also dot our vast planet — and most have an earth station standing like a shrine to the testament of past sacrifices made by one or more of my fellow travelers .

In closing, some words of wisdom from the world traveler taken directly from the Chronicles – always ask the price, never leave your drink unattended and you can gargle with the tap water, but DON’T SWALLOW IT!