After mild success in the early 2000s, new opportunities have opened up over the past two years in two-way satellite access, particularly in North America, Asia, as well as in Europe.

In addition to the substantial decrease in the price of satellite terminals, the introduction of Ka-band frequencies, thanks to spectrum reuse, has been largely responsible for the revival. In addition to available capacity, the central issue for satellite operators when implementing this frequency band is the lower cost of employing it: overall, the current price per Mb for the Ka-band is four to 10 times less than for the Ku-band. This means consumer prices are substantially lower than they were five years ago, spurring faster take-up by users in the zones targeted by the technology.

Encouraged by the advancements being made, several European satellite operators have recently launched, or are about to launch, satellite services in the Ka-band. However, given the competition from wireline and wireless terrestrial technologies, what is the actual market outlook for satellite technology? What positioning strategies will be most suited for a satellite operator, taking account of the particular features of the broadband market, in the various targeted geographical zones?

DSL Network Coverage + Bitrates
It appears that broadband coverage by terrestrial networks (DSL and cable) is still limited in rural areas. The level of a country’s terrestrial broadband coverage, a chief indicator of the competitive environment, has a relevant impact on market opportunities for satellite Internet access solution.

Western Europe is well covered, with rates that often well exceed 95 percent of the population being covered. Eastern Europe still lags behind Western Europe, although this region is catching up — its largest markets, such as the Czech Republic (85 percent) and Poland (64 percent) contiue to report coverage rates that are well below those found in Western Europe. 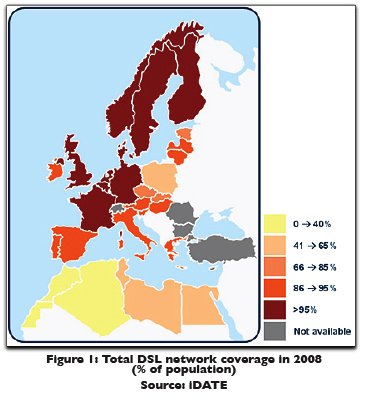 Meanwhile, North Africa is characterized by a dire lack of fixed infrastructure. In 2008, only Egypt, Tunisia, and Libya were reporting coverage for more than half the population, while Morocco, at 16 percent, is the country with the lowest wireline network coverage. (See Figure 1)

Urban and suburban coverage rates in Western Europe are naturally very high, and in many cases, close to 100 percent. A migration to ultra-fast broadband (VDSL, FTTx) is underway in these zones, thanks to existing or scheduled rollout plans. In France, for instance, several FTTx deployment projects are underway in the country’s largest cities, operated by both the incumbent carrier, France Telecom, and by alternative telcos such as Free and SFR/Neuf Cegetel.

Eastern Europe has been gradually making up for lost time over the past few years but, without exception, a rate of 95 percent coverage in urban zones is not expected to be achieved until 2010 at the earliest. As to North Africa, coverage is meagre in the major cities where coverage can vary considerably from one neighborhood to the next.

Analyzing the rate of coverage of the rural population is central to establishing whether a market is a potential target for satellite access, as these are the areas where satellites can best compete with terrestrial technologies, thanks primarily to the broad coverage provided by orbits 36,000 km above the Earth. 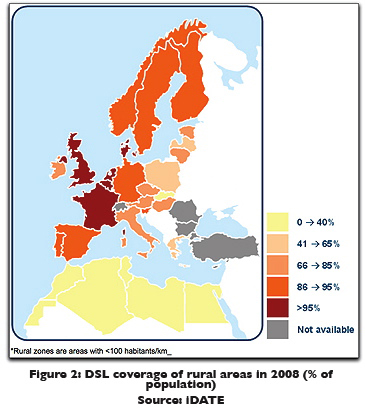 A detailed study of coverage rates reveals massive disparities between zones and even between countries in the same zone. In 2008, the rate of coverage of the rural population in several countries in Western Europe was below 85 percent, with cases in point that include very populated countries such as Austria, Ireland and Greece. The rural population in central and Eastern Europe was even less well served by wireline networks, with the average rate of coverage nearing 65 percent. And, lastly, the rural populations of North Africa are not covered by broadband networks at all and, as it stands, there are few government initiatives aimed at changing the situation which is therefore likely to continue as is for some time to come. (See Figure 2)

Concerning access speeds, residential DSL services differ considerably, depending on the user location (urban/suburban or rural zone). On the whole, most have access to a very high-speed service (more than 2 Mbps), which made real strides between 2005 and 2008, as shown in the chart below. It is likely that the speeds offered to subscribers will increase in the coming years, as telcos roll out FTTx technologies. (See Figure 3 ) 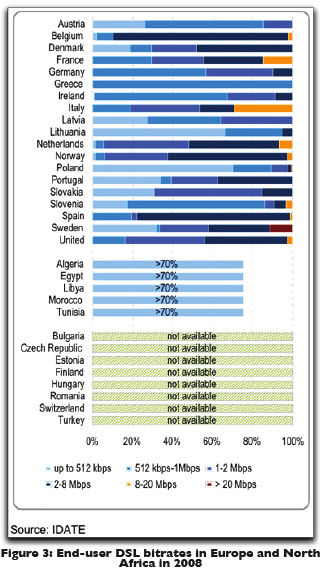 The bitrates delivered over cable are also very high, generally more than 1 Mbps, and there is little difference between the service provided to urban/suburban users and those located in rural areas. As with DSL, it is likely consumers will be offered faster services as cablecos upgrade their infrastructure to be able to compete with the speeds offered by ADSL2, VDSL and FTTx technologies.

However, iDATE notes that in several cases, subscribers can actually have a subscription to a high speed broadband package but in reality have speeds of only 512 Kbps, depending on their locations from the DSLAM.

iDATE estimates that in 2008 there were more than 30 million households in Europe and North Africa that still did not have access to broadband, compared to 37 million in 2007 — a high percentage of them residing in North Africa where landline infrastructure is still extremely limited.

Satellite, WiMAX, 3G... Who’s Going To Win?
Covering broadband dead zones requires sizeable investments that telcos have no obligation, and perhaps no economic reason, to make. In many cases, providing these areas with coverage requires government intervention, starting with the involvement of local authorities. 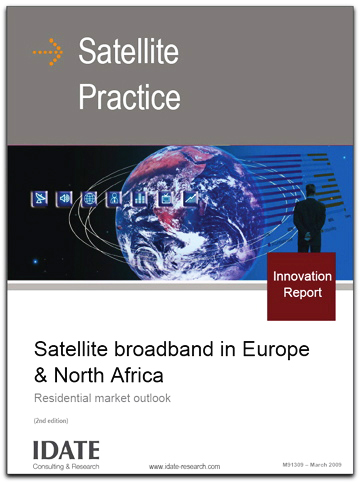 The choice of a satellite or a wireless solution is often the result of a compromise between technical efficiency and cost-effectiveness, but also depends on a political desire that favors one solution over another. In mid-2008, Ireland issued a call for candiDATEs as part of its “National Broadband Scheme” aimed at covering households that were not eligible for DSL. After several months of deliberation, it was ultimately a 3G-based solution proposed by mobile operator 3 Ireland that was selected. BT Ireland had proposed an offer based on WiMAX, which it ultimately withdrew, considering it too costly to deploy when compared to the spectrum licences awarded by the Irish regulator. It appears, however, that 3 Ireland is having some economical issues with 3G in rural areas… and is actively looking at satellite technology.

In France, national regulator Arcep is also pushing for a WiMAX-based solution, but is by no means hostile to a satellite solution. However, it has recently indicated that the WiMAX technology experienced great delays in terms of deployment, and similar cases are found with several other European countries. The regulator has admitted that satellite does have the advantage of being immediately available, but also points out a number of weaknesses, including the inability to serve all ineligible households, the caps on traffic that are often imposed, and the price of the CPE which, even though it has dropped substantially over the past few years, still remains high. 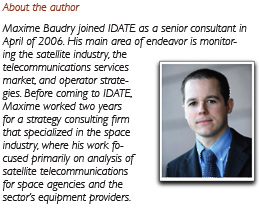 3G, meanwhile, is not considered as a serious alternative in the short term, notably because the technology does not cover dead zones and that its terms of use, especially its price and traffic caps, are still a major obstacle.

Despite its minor weaknesses, satellite currently remains the best and most cost-effective technology to cover white zones. With the coming launch of highly capable satellites such as Ka-Sat (Eutelsat) and Hylas-1 (Avanti), iDATE expects a strong boost to satellite subscriber bases over the coming years.