As a researcher involved in high resolution satellite remote sensing of both man-made and natural disasters I was very surprised to find myself trapped in southern India in mid-April due to the recent unexpected volcanic eruptions in Iceland by the closure of UK airspace, and indeed most of Northern Europe for the best part of a week. Having just visited the most southerly tip of India, an area badly affected by the tsunami in 2004, and seen the monument to those who died at Cape Comorin (‘Land’s End’), and researching Internally Displaced People, I found myself an unwitting Externally Displaced Person myself. 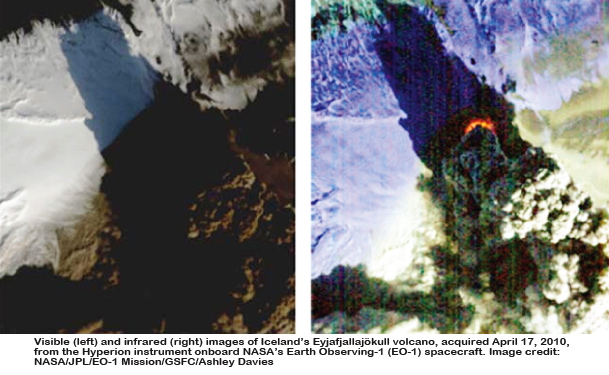 The advances in satellite imagery in the last decade now provide timed sequences of Meteosat style data that reveal the gradual spread of the ash clouds after the eruption under the Eyjafjoll glacier, to detailed Ikonos imagery, E0-1 30m resolution ALI visible imagery as well as other crucial sources of detailed imagery captured by satellites such as NASA’s Aqua and Terra platforms. 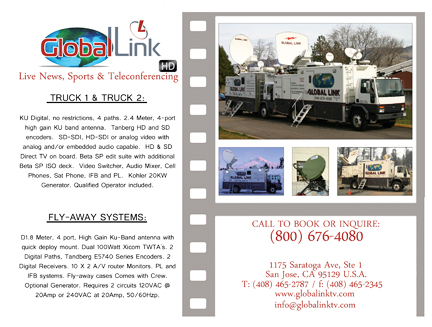 Aqua can provide beautiful detailed imagery from its Moderate Imaging Spectrometer (MIS), which showed the changes to the path of the ash plume, which by May 10th had reached as far a field as North Africa, Turkey, and Morocco. However, the scale of the economic impact of the volcanic eruption extended not only to the airlines and stranded travellers (including my family making the most of our extended stay), but to the entire globe, as the financial impact of lost revenue from products such as bananas to a lack of car manufacturing components arriving by air in China struck home. This was quite surprising.

Just as there was a domino effect on subsequent flight delays and flight cancellations that swept across the globe, so the economic consequences were almost as quick to follow, demonstrating how much we really are an integrated, or at least integrating, global community. A relatively small volcanic eruption has had a surprisingly large impact on humanity as a whole, just as when I injure my little finger my whole body (and family) knows all about it.

Clearly one lesson to be learned in the aftermath of this incident is the need for development of a more robust integrated global transportation system better able to deal with a variety of emergency disaster scenarios. The implication of this should not be lost on satellite telecommunication operators who must be able to ensure provision of at least essential traffic if an unforeseen event, such as a repeat of the March 1989 Solar eruption, if the impact on satellite operations, which affected severely both E1 and E2 satellites operating over Canada and Northerly latitudes, is to be avoided. 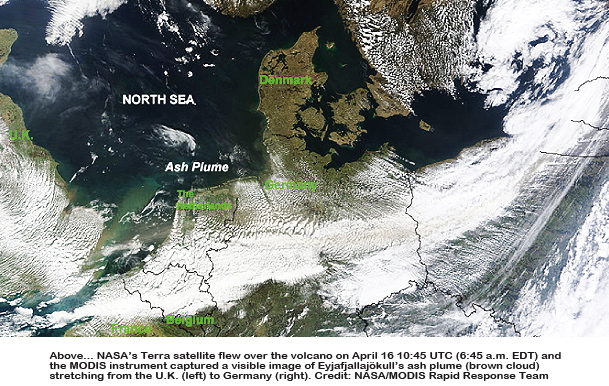 Fortunately, the sun is currently experiencing a minimum of solar activity — well away from the hyped melodrama enjoyed while watching the 2012 blockbuster in-flight ‘entertainment’ on the way to India!

There are issues of risk which need to be evaluated and examined with care. It is clearly better to adopt a precautionary approach at the beginning and relax the no-fly zone conditions later than to have half a dozen Airbuses (or is that Airbusi?) go down before anyone takes the situation seriously.

To be fair on both the National and European Air Traffic aviation authorities, there was just no previous precedent for them to draw upon experientially; the last time this scenario occurred, we did not have automobiles, let alone planes, in the sky.

The perception of risk alone is also likely to be seriously flawed, especially if we take into account too heavily the views of stranded tourists 5,000 miles away (stuck without air conditioning due to early monsoons) who are likely to want to fly home no matter what conditions are prevalent.

But how objective can you be when dealing with the unexpected? Our own assessment of risk took a surprising turn as we experienced a coach brake failure (or brake-away) up in the mountains of the Western Ghats a week before our originally planned return home — crazily swerving down a thankfully open road at 50 miles an hour with a 1,500 foot drop on our left — that was until our driver found a wider strip of land to our right, directly next to another ascending rock wall with an electricity pole dead in front of the bus... hope reigned supreme until the bus struck a large rock and barrel rolled left towards the cliff — again!

After rolling 450 degrees (I counted the rolls as I was wondering whether we would go over the cliff, and not that, as a rule, satellite analysts tend to count things), we finally came to a rest. Miraculously, no one was killed or seriously injured, with only the front passenger wearing a seatbelt. Everyone, 18 of us and the driver, from three years to 70+ in age, walked out of the bus. Actually, my three smallest children were pulled up out of the side-windows that were now facing heavenward, dazed but grateful to be alive (photo insert, above). 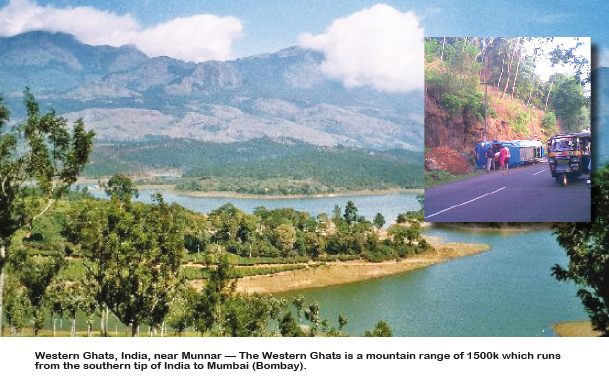 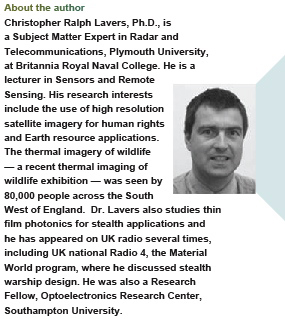 How do you prepare and evaluate accurately the risk of infrequent, or once-in-a-lifetime events, such as a cometary or asteroid impact? The answer is you can’t.

However, satellite imaging and the estimation of gases, such as Sulphur Dioxide, with the help of NASA’s Ozone Monitoring Instrument (OMI), and further satellite data alongside ‘ground truthing’ of ash, are a vital part in ensuring travel by air (and maybe in the future, by coach!) are as safe as is humanly possible. 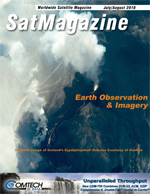