On September 6, 2013, an Orbital Sciences’ Minotaur V launch vehicle boosted the $263 million Lunar Atmosphere and Dust Environment Explorer (LADEE) mission skywards to engage in a study of the Moon’s thin exosphere (an atmosphere that is extremely thin and tenuous where molecules do not collide with one another) and lunar dust environment. 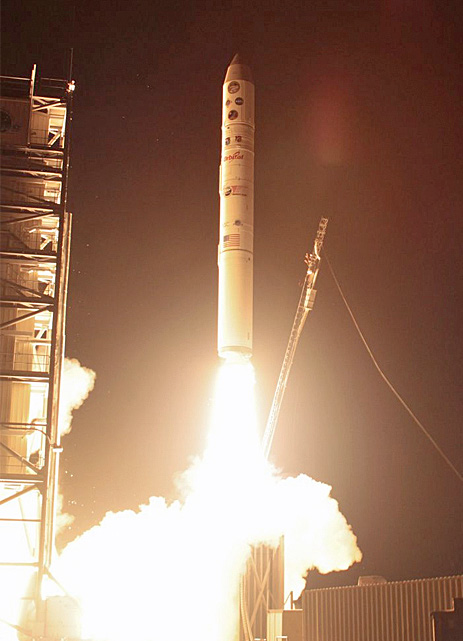 LADEE will orbit the Moon for 100 days and will host three scientific instruments. About two-and-a-half months will be required for the spacecraft to reach the Moon, with travel including a number of phasing orbits to ensure arrival at the Moon during the appropriate phase and time. Before starting the mission, LADEE must move into its scientific orbit and engage in a full systems’ checkout before initiating its robotic work.

The Launch
Originating from Wallops Flight Facility in eastern Virginia, the LADEE mission marked the first launch of Orbital’s Minotaur V rocket and the fifth Minotaur vehicle to be launched from that facility.

The first stage of Minotaur V ignited at 11:27 p.m. (EDT) on September 6th and separated the LADEE spacecraft 23 minutes later into its intended insertion point, successfully completing the rocket’s five-stage sequence. With the placement of LADEE into its highly elliptical orbit, the spacecraft started its 30-day journey to the Moon. Upon reaching its nominal orbit approximately 31 miles above the lunar surface, LADEE will collect data on the Moon’s exosphere and lunar dust environment.

The Minotaur V is a five-stage space launch vehicle designed, built and operated by Orbital for the U.S. Air Force. The vehicle uses three decommissioned Peacekeeper government-supplied booster stages that Orbital combines with commercial motors for the upper two stages. Together they produce a low-cost rocket for launching smaller spacecraft into low-Earth orbit and higher-energy trajectories, such as the trans-lunar flight of the LADEE mission.

Under the Orbital/Suborbital Program (OSP) contract, which is managed by the U.S. Air Force Space and Missile Systems Center (SMC), Space Development and Test Directorate (SMC/SD) Launch Systems Division (SMC/SDL) located at Kirtland Air Force Base, New Mexico, Orbital designs, integrates, tests and provides launch services to orbit with the Minotaur I, IV, V and VI rockets, as well as other suborbital capabilities with the Minotaur II and III configurations. The company has launched a total of 23 Minotaur rockets with a 100 percent success record that dates back to January of 2000. 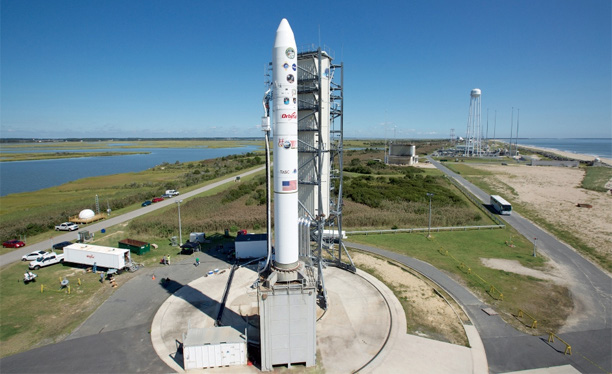 The Minotaur launch vehicle on the pad, photo courtesy of Orbital Sciences

The rockets are specifically designed to be capable of launching from all major U.S. spaceports, including government and commercial launch sites in Alaska, California, Virginia and Florida. Orbital’s use of standardized avionics and subsystems, mature processes and experienced personnel make Minotaur rockets both reliable and cost-effective for U.S. government customers.

Mission Overview
A number of new technologies will be tested that include a modular spacecraft bus that could assist in reducing the cost of future deep space missions—a most welcome possibility—as well as a two-way, high rate laser communications system from the Moon. Called the Lunar Laser Communication Demonstration, the transmissions will be via laser (622Mb/s) and not radio signals (around 100Mb/s). 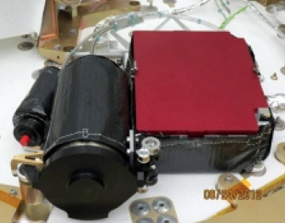 The lunar examination is to investigate the Moon’s exosphere for composition, density and temporal variability, as well as studies of the lunar dust that is expelled from the Moon into the atmosphere. Solar wind, the interior and the surface of the Moon, and meteoric infall will also be studied. The immediacy of this mission was required to obtain the projected data before any further human exploration and disturbance of the Moon’s relatively natural state occurs.

LADEE’s investigations will assist scientists in understanding other planets’ exospheres which, in turn, aid in the understanding of our solar system. And, the last time humans were on the Moon’s surface, the astronauts sighted diffuse emissions at 10s of km above the lunar surface. LADEE will be able to determine if these emissions were caused by sodium glow or dust.

The LADEE mission is divided into mission phases: Launch, Ascent, Activation and Checkout, Phasing Orbits, Lunar Orbit Insertion, Commissioning, Science, and Decommissioning. The spacecraft will approach the Moon from its leading edge, travel behind the Moon out of sight of the Earth. LADEE will then re-emerge and execute a three-minute Lunar Orbit Insertion maneuver. This will place LADEE in an elliptical retrograde equatorial orbit with an orbital period of approximately 24 hours.

A series of maneuvers will then be performed to reduce the orbit to one that is nearly circular, with a 156-mile (250-kilometer) altitude. The 100-day Science Phase is performed at an orbit that will vary between 20–60 kilometers due to the Moon’s “lumpy” gravity field. During the Science Phase, the Moon will rotate more than three times underneath the LADEE orbit.

Following the Science Phase, a decommissioning period is planned, during which the altitude will be managed down to lower altitudes, followed by the spacecraft impacting the lunar surface. 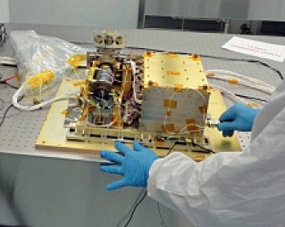 The Crafting Of LADEE
NASA’s Ames Research Center in Mountain View, California, designed, developed, built and tested the spacecraft and will also be responsible for mission management. There is an innovative build to this spacecraft as multi-use designs are built, enabling more of an “assembly-line”-like production model. Just as the Ford Model-T managed at the dawn of the automative age, this multi-use manufacturing mode will drastically reduce the cost of spacecraft builds.

As an example, if a common bus was assigned to land on a planet, a “legs” module could be added, as well as other necessary components specific to mission’s needs. Spacecraft could also be built that are lighter, or quicker to build, simply by removing extensions from the common bus... more of a “plug-and-play” design that is able to handle all sorts of missions, from lunar to NEOs (Near Earth Objects) examinations.

The Instruments
The three science instruments, as well as the technology onboard demo:

– Lunar Dust Experiment (LDEX)—Will collect and analyze samples of any lunar dust particles in the tenuous atmosphere. These measurements will help scientists address a longstanding mystery: Was lunar dust, electrically charged by solar ultraviolet light, responsible for the pre-sunrise horizon glow that the Apollo astronauts observed? The Principal Investigator is Mihaly Horanyi, Laboratory for Atmospheric and Space Physics, University of Colorado at Boulder.

– Technology Demonstration: Lunar Laser Communications Demonstration (LLCD)—Currently, communications with spacecraft beyond close Earth orbits require them to have small, low-mass, low-power radio transmitters and giant satellite dishes on Earth to receive their messages. However, the LADEE spacecraft will demonstrate the use of lasers instead of radio waves to achieve broadband speeds to communicate with Earth. 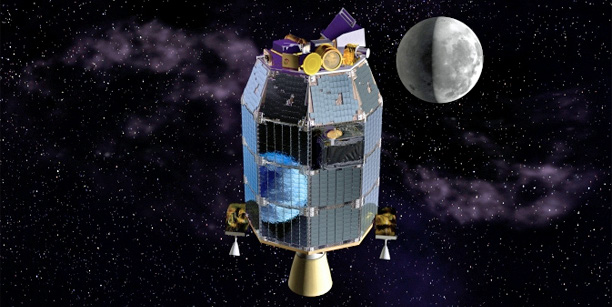 Artistic rendition of the LADEE spacecraft.

The Checkout
Rachel Hoover of NASA Ames Research Center reported that LADEE was placed by the Minotaur V launch vehicle into an elliptic orbit around Earth, as the start of its journey to the Moon.  After adjusting some fault protection settings to enable the reaction wheels, mission controllers at NASA’s Ames Research Center in Moffett Field, California, successfully completed the initial systems’ checkout phase, and everything looked good. This checkout included spacecraft acquisition, tracking, and ranging by all the ground stations.

The propulsion system also was activated to do a momentum dump, which means that the spacecraft spin and the reaction wheel spins were reduced together to a nominal state.

The LADEE spacecraft, as of this writing, is currently in an elliptical orbit around Earth, about 162,000 miles (260,000Km) in altitude. Mission controllers performed an extended checkout phase that included guidance, navigation and control characterization, reaction control system tests, and on-board controller tuning.

The spacecraft was at the highest point in the current orbit (apogee) at 9:30 a.m. PDT, Tuesday, September 10th. LADEE dropped back down to its closest approach to Earth (perigee) at 9:38 a.m. PDT on Friday, September 13th, when an engine burn to boost its orbit was performed. LADEE will continue with two more of these elliptical orbits until it is captured around the Moon to do its initial Lunar Orbit Insertion (LOI-1) burn on Sunday, October 6th. After that, the spacecraft is in lunar orbit. The LOI burn is one of the most critical phases of the mission, as without it working, there is no lunar orbit.

The Launch Family
The Minotaur V from Orbital Sciences is just one member of an entire launch vehicle family: 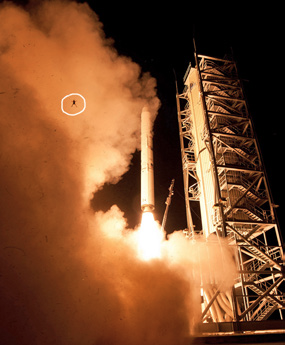 Even A Frog Gets Into The Act
This photo is legitimate and totally unaltered. One of NASA’s remote cameras rolling on the Minotaur V rocket launch on September 6, 2013, captured, frame-by-frame, in great detail the launch… of a frog. NASA released the photo with this explanation: “A still camera on a sound trigger captured this intriguing photo of an airborne frog as NASA’s LADEE spacecraft lifts off from Pad 0B at Wallops Flight Facility in Virginia. The photo team confirms the frog is real and was captured in a single frame by one of the remote cameras used to photograph the launch. 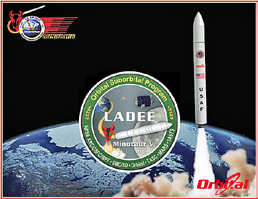 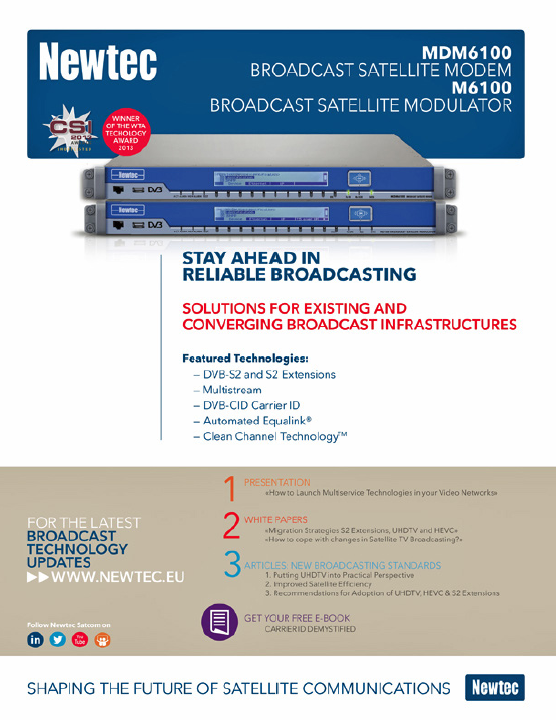