We are at a tipping point in the satellite industry. The Cisco Internet Routing in Space (IRIS) initiative extends into space the same Internet Protocol-based (IP) technology used to build the World Wide Web. The long-term goal is to route voice, data and video traffic between satellites over a single IP network in ways that are more efficient, flexible and cost-effective than are possible over today’s fragmented satellite communications networks. 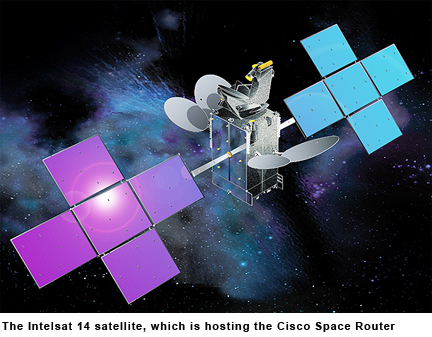 The IRIS Vision
With a space router on board, it is possible to route traffic between satellites to provide better reliability and more sophisticated services to satellite customers, and not only to users on the ground. With this architecture, a small number of space routers provide a resilient network backbone in space. This backbone augments terrestrial networks and retains Internet connectivity even in the event of fiber cuts or natural disasters. This space network is not independent of the Internet — it is a natural extension of the Internet.

One key element of the IRIS vision is introducing standards across the satellite network and satellite industry to allow interoperability with terrestrial connections.

The IRIS testing phase is chock-full of firsts. While in orbit, the router has been uploaded with additional capabilities, such as Cisco Unified Communication Manager Express, which provides telephone services throughout the network. Cisco recently updated the software in the space router aboard Intelsat 14, effectively “turning on” a variety of capabilities already available for Cisco’s terrestrial products and making them available in space. This is a revolutionary concept in an industry where satellite operators generally don’t have the luxury of changing a payload post launch, and it opens IRIS to further changes, applications and upgrades. 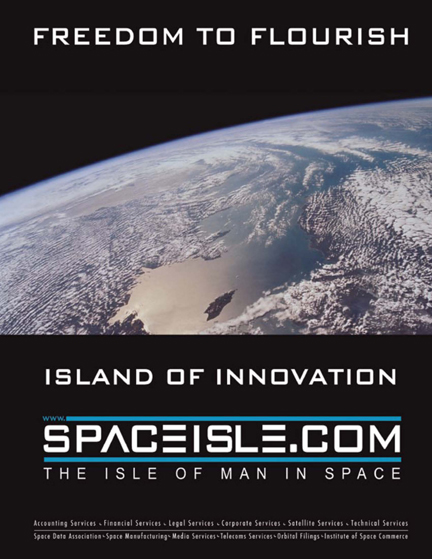 Applications
Cisco designed IRIS as a commercial product that is available to both civil and government customers. Service providers and enterprises can make use of IRIS services to access the Internet anytime, anywhere and from any device.

The true power of IRIS is that it takes all of the capabilities and benefits that exist in the terrestrial Internet and allows them to be used over satellite networks. It makes satellites an intelligent part of the overall network, rather than just passive repeaters of radio signals. More importantly, IRIS allows the end user to take advantage of the reach of satellite bandwidth without needing to deal with the complexities of satellite access.

The ability to provide connectivity to support military personnel on the ground has become critical. Troops operate in environments ranging from the austere to the complex, from unimproved mountainous terrain to urban areas, in missions to combat terrorism and insurgency, provide natural disaster response, or engage in direct military operations. In such situations, the availability, robustness, and resiliency of connectivity and communications have the power to determine how such operations can be carried out, and whether some can be undertaken at all.

Law enforcement officers are another customer set that has critical needs for communication. They cannot anticipate where or when a situation will arise, so the network must be able to deliver communication services on demand, instantly. IRIS extends the on-demand service delivery model to include satellite communications. Bandwidth can be allocated to the most critical needs of users.

Security is another important aspect of law enforcement and defense, so IRIS extends terrestrial security policies and firewalls to the satellite components of the network. 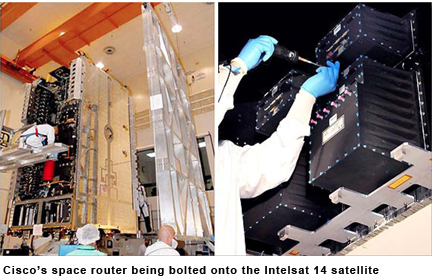 One example of the way the technology will benefit users is how it assists emergency workers who are responding to a natural disaster. If a terrestrial infrastructure is destroyed, you can’t get a cell phone signal to save your life — or anyone else’s. The hurricane, earthquake or flood has leveled cellular towers for miles. What do you do?

With IRIS, the satellite can provision voice service for emergency workers and connect police with the fire department and the hospital, all through the satellite. No traditional telephone network is required to route the call.

Cisco had an opportunity to use IRIS to provide support for the Haitian relief effort. Together with partners, we set up Cisco TelePresence units in Haiti and in Miami. A number of injured children were airlifted into the University of Miami hospital for treatment after the earthquake. Unfortunately, their families were not able to travel with them, so IRIS and TelePresence enabled the families to stay connected.

Commercial Use
Cisco works with a variety of leading service providers in the commercial industry. These users are supporting the transition from the traditional telecommunications of the late ’90s, when buying a T1 connection might cost around $1,000 dollars, to today’s day-to-day Internet connection at $20/month. Cisco’s goal is to make satellite services as easy as using a mobile phone, by changing the way services are accessed. This would allow a telecommunications company to combine satellite, wireless, and other featured services. 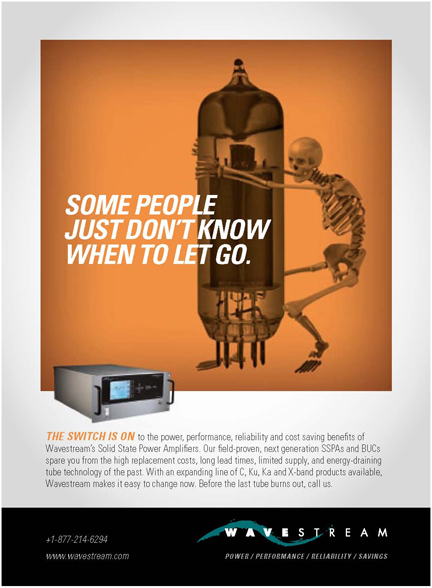 Cisco is working to create a standards-based approach to integrate satellite into day-to-day telecommunications. We want a combination that can reach out to all different signals. With a space router, you now have the dynamic of combining all these technologies for mobility management, data access management, and multiple access lines, including satellite, combined with the capabilities of IP.

Following the successful deployment of the industry’s fastest commercial processor in space from SEAKR Engineering as part of the Cisco Space Router on board Intelsat’s IS-14, Cisco recently announced an agreement with TeleCommunication Systems (TCS), who will be taking on the role of service provider for the Internet Routing in Space payload on IS-14 for global entities that include the U.S. Department of Defense. This marks a big step for the IRIS router, as it illustrates the commercial capabilities the program has to offer. Both Cisco and TCS foresee major opportunities to globally deploy these cost-efficient solutions through government and commercial markets.

The Challenges + Benefits Of Hosted Payloads
Launching IRIS as a hosted payload ensured a number of benefits as well as challenges for the IRIS team. “Hosted payload” refers to the use of available capacity on commercial satellites to accommodate additional transponders, network communications components, sensors, surveillance gear, or other important capabilities. Such “piggyback” or “hitchhiking” opportunities on commercial spacecraft provide users with a timely and cost-effective way of sending equipment into space.

Placing a hosted payload on a commercial satellite costs significantly less than a defined firm fixed-price contract, and includes integration of the payload with the spacecraft as well as the marginal use of power, launch services, and other operating costs.

Based on IP networking, hosted payloads support the goal of accelerating convergence of ground, air, and space infrastructures into a single voice, data, and video network, while mitigating many of the interoperability issues between systems. Networking services are offered on demand via an IP-based full-mesh network from the satellite instead of “hop by hop” through terrestrial nodes. The satellite becomes an access point for the entire system, acting as a telecommunications office from space to serve the overall network. 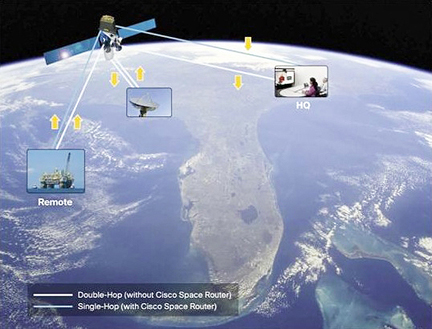 A hosted payload allows current commercial technology to be placed in space very quickly to provide 80 to 90 percent mission capability to today’s warfighter. However, the government prefers to pursue the development of 100 percent coverage solutions that could take decades to deploy — another challenge to consider. The benefits of IP-based routing in space include...

– Cuts the transmission double hop in half, allowing IP-based signals to interconnect in a single hop for more immediate communication

– Routes traffic to intended recipients asynchronously, using one uplink and one downlink, keeping the signal stronger

– Regenerates the signal to provide a power increase, reducing the size of antennas on the ground, a feature that is particularly important for mobile

Over the coming years, IRIS will support the deployment of a truly mobile network that allows users to connect and communicate how, when and where they need to, and that continuously adapts to changing needs without depending on a fixed terrestrial infrastructure. This significant inflection point is not different from what the telcos in 1995 experienced, and will converge voice, data and video over IP. This technology will transform how government agencies and commercial organizations use IP-based network services to accomplish their missions.

For more information on Internet Routing in Space, visit
www.cisco.com/go/iris.

About the author
Steven Boutelle leads a business development team that advises government customers on business practices and technology solutions. Boutelle’s team focuses on defense, space and intelligence markets. Before joining Cisco, Boutelle served as the Chief Information Officer of the U.S. Army, responsible for the Army’s worldwide use of information technology. He introduced converged voice, data, and video to the Army, building an enhanced network infrastructure to serve 1.9 million users.

He established the Army Knowledge Online portal and the Defense Knowledge Online portal to provide streamlined access to content for six million defense users. Through an IT portfolio management program, he reduced the costs of IT systems and applications by half. Boutelle is a recognized leader, technology evangelist, and mentor. His career in the U.S. Army is marked by a consistent record of adopting new technologies and streamlining processes to improve productivity and enhance collaboration.