In the last decade, the satellite payTV industry has become global and has reached a critical size in the digital TV market. Close to 140 satellite payTV platforms are currently in operation around the world, covering more than 100 countries in the different regions of the world. The number of platforms has more than doubled since 2001. In the last couple of years, close to 30 new platforms were rolled out. Most of them operate in emerging digital markets. In the recent past, Latin America and South-East Asia have clearly been two of the most dynamic regions. An increasing number of countries have at least one active platform, the latest countries to roll out services being Myanmar (Burma) and Georgia (Europe) in 2011. 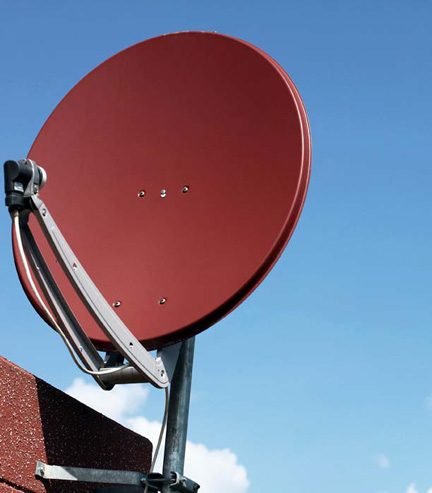 In the last decade, satellite payTV subscriptions grew by at least 10 percent every year. The positive trend continued in 2011 when worldwide subscriptions increased by around 16 percent. Some of the fastest growing markets include Brazil, Russia and India.

Asia has even become the leading region in terms of subscriptions ahead of North America thanks to the booming Indian market. India has one of the fastest growing satellite payTV subscriber bases. In 2011 alone, around 12 million subscribers were added by the country’s six payTV platforms. Most countries observed an increase in satellite payTV subscriptions in 2011 but there were exceptions. Indeed, several countries including the Nordic countries, Spain and Australia lost satellite payTV subscribers during the course of 2011. Reasons vary depending on the country. Subscriber losses were notably explained by increasing terrestrial competition, growing free-to-air competition and the economic downturn.

Revenues have also increased consequently in the recent past. In 2011, they reached close to $90 billion, up from $79 billion in 2010 (i.e., +14 percent). All regions experienced revenue growth in 2011, with Latin America leading the way. The growing number of value-added services (e.g., HD, OTT, VoD, PPV...) offered by platforms is one of the main revenue drivers, notably in mature digital TV markets where subscription growth has been more limited in recent years.

The performance of the industry is quite exceptional, as indicators have progressed despite unfavorable global economic conditions. North America and Western Europe, which have been strongly impacted by the economic slowdown in recent years, still account for a large majority of global revenues thanks to higher-than-world-average ARPUs.

The dynamism of the satellite payTV industry resulted in the broadcasting of close to 1,000 additional channels in 2011. While the historical satellite payTV platforms continued to diversify content by adding new channels, including a large number of HD channels, the launch of new platforms in the last couple of years also drove additional channel roll-outs in emerging digital markets, where most new platforms offer services. In 2011, more than 80 percent of net new channels were distributed in emerging digital markets and about 60 percent of channels that were rolled out were HD channels.

Satellite TV Growth Drivers
In the last five years, emerging digital markets have experienced a tremendous growth in the number of players, revenues and in subscriptions. 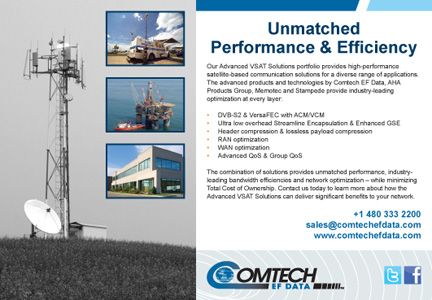 There were more than 100 satellite payTV platforms in emerging markets at the end of 2011. The number of countries with at least one satellite payTV platform keeps on growing year after year and this trend is expected to continue in coming years. Bangladesh and Pakistan could very well be two of the future countries to roll out their first platform. In Bangladesh, this would be favored by the expected launch of a national satellite, Bangabandhu-1, in 2015. Several markets have seen the introduction of two or three new platforms in the last couple of years, including Vietnam (K+, AVG and VTC Digital), Indonesia (Centrin TV, SkyNindo and Nexmedia), Bulgaria (Vivacom and Satellite BG) and Brazil (CTBC and GVT). Those markets currently represent strong growth drivers for the overall industry, while the potential, but still far from certain, opening of the Chinese market may give a new boost to the industry in the middle- to long-term.

Subscriptions to satellite TV platforms in emerging digital TV markets reached 110 million in 2011, up from the 2006 total of 19 million. India has been one of the main growth drivers over the five-year period, with countries like Brazil, Mexico, Russia and even Indonesia joining forces more recently. Operating mainly in areas with a limited development of terrestrial networks and ageing cable infrastructure, satellite payTV platforms will continue to represent a driving force for the development of digital entertainment in those markets.

Investing In Value-Added Services
Technological improvements and investments in research and development have facilitated the development of new types of video services that represent new relays of growth for satellite payTV platforms. HDTV, next-generation set-top boxes (STBs), OTT and 3D are certainly key drivers for payTV platforms for the coming years. Driven by the challenge of growing terrestrial competition (free-to-air and pay competition) and the launch of new satellite TV competitors in many markets, platforms have been investing massively in the development of innovative and enhanced services to develop competitive advantages. 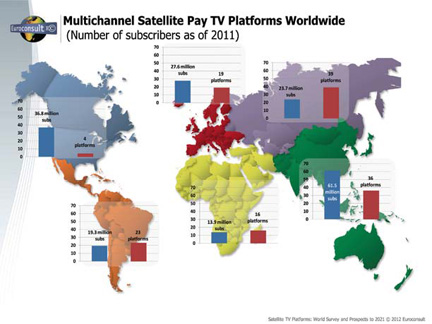 HDTV is the perfect example of the necessity for satellite TV platforms to invest in value-added services in the current competitive landscape. The HDTV market continued to rapidly increase in 2011, following four years of strong growth between 2007 and 2010. Around 90 satellite payTV platforms have already rolled out HD services. All regions of the world now offer HDTV via satellite payTV platforms. Dozens of HD channels are available in all the leading broadcasting markets around the world. A large number of smaller TV markets have also rolled out their first HD channels in the last couple of years. As a consequence, HD is becoming a mass market product that a wide number of TV households can now access.

An increasing number of platforms have rolled out or are planning to roll out OTT services (e.g., Sky Brazil, OSN, Sky Digital...). In many cases, this is a competitive move to block competition from specialized on-demand Internet streaming media providers such as Netflix and Hulu. While such services may reduce churn and increase the average revenue per subscriber in the middle term, they represent an initial investment from platforms in terms of set-top-box subsidies, programming rights, marketing campaigns and customer care, and they require dedicated partnerships and revenue-sharing schemes.

The situation is totally different for 3DTV. One of the main barriers to adoption of 3DTV is the need for consumers to buy a new screen, especially as many households have recently bought a new HDTV screen and they are reluctant to make another costly CE purchase in the short to middle term. The other main barrier is the minimal amount of content available in 3D. As was previously the case for HD, the scarcity of 3D content in the initial development phase of the format is an issue that is expected to have an impact on the initial development of the format. At the end of 2011, 16 satellite payTV platforms had launched 3D services, including Sky Digital in the United Kingdom, Foxtel in Australia and Sky Deutschland.

Adapting To Increasing Competition
Terrestrial competition (i.e., cable TV, IPTV, Digital Terrestrial TV) has increased in recent years with the rapid development of IPTV services and the digitalization of networks. On a global basis, cable TV has been less of a threat, as cable operators are still mostly broadcasting on analog networks in a large number of countries and particularly in emerging digital regions and as the digitalization of networks takes time and is very expensive. 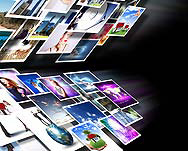 The emergence and the success of IPTV services appears to be a major long-term challenge to satellite TV platforms due to the capabilities offered by the broadband return path in addition to the reception of TV content. Currently, the threat primarily involves the most advanced telecom and media markets, in which telecom operators invest in large DSL and fiber coverage.

Competition is also coming from online video distributors such as Apple TV, Netflix and Hulu, which offer OTT services. These services have grown in popularity in past years and could pose a growing threat to satellite payTV platforms if they continue to attract additional viewers. The market is particularly developed in North America and it is quickly expanding in Europe.
Growing competition has pushed satellite payTV platforms to put in place strategies to adapt, whether it be by offering Internet and telephone services, by offering pre-paid services, or by rolling out their own OTT services.

A growing number of satellite payTV platforms offer their subscribers the possibility to also subscribe to Internet and telephony services. This is clearly an attempt to limit churn toward IPTV service providers that usually offer triple-play or quadruple-play services to their subscribers. By offering Internet and telephony services, satellite payTV platforms can compete more directly with telecom operators.

The impact of growing competition on satellite payTV platforms is expected to differ quite significantly depending on the regions. The mature digital TV markets should be more directly impacted than the emerging digital markets.

On a global basis and despite growing competition, the satellite payTV market is expected to remain dynamic in the coming decade, with emerging markets driving growth. In several of these markets, an emerging middle class is embracing payTV services. This trend is expected to expand to more markets in the coming decade with the continued projected growth in household formation and per capita income growth.

Global industry revenues are expected to reach close to $150 billion in 2021, with emerging markets (i.e. Latin America, Central Europe, Russia, the Middle East, Africa and Asia) representing a growing share of revenues that will nearly double over the next 10 years to reach 44 percent by 2021. Subscriptions are also expected to grow in the coming decade. Close to 350 million households should subscribe to satellite payTV platforms worldwide by 2021, representing a 6.7 percent CAGR over the 10-year period.

About the author
Dimitri Buchs is a Consultant based in Euroconsult’s Paris office, where he is part of the Digital Broadcasting analyst team which produces the Satellite TV Platforms World Survey & HDTV reports.  He also contributes to other Euroconsult research reports, specifically those focused on digital broadcasting. Prior to joining Euroconsult, Dimitri participated in several consulting assignments, in particular analyzing the impact of free newspapers on pay media and mobile TV. Dimitri has a Masters of International Management and a Bachelors of Economics from the Pantheon-Sorbonne University in Paris. He joined Euroconsult in 2007. 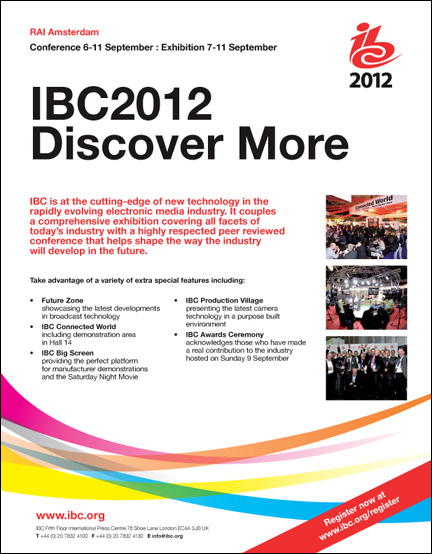