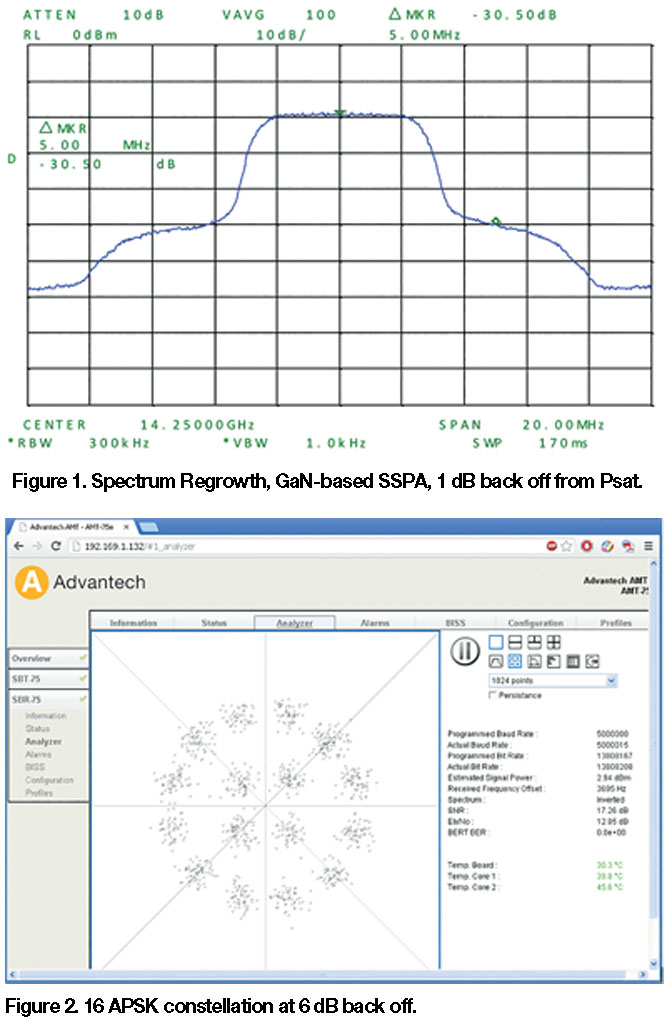 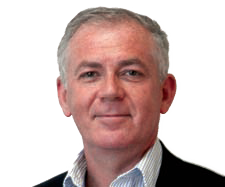 Since the initial launch of GaN based Solid State Power Amplifiers by Advantech Wireless in early 2010, many uncertainties and unknown issues have been clarified.

We know today that GaN is the foundation of all new Power Amplifier development and design and offers unmatched performance, reliability, and efficiency. The purpose of this article is to characterize, in particular, the linearity of Advantech Based GaN SSPAS, when operated either in single carrier mode, or in multi carrier mode. A comparison with TWTs is long overdue, and here the comparison is included. Advantech’s belief is that today GaN exceeds power levels that were never achieved with any technology and opens a new range of applications and opportunities for the satellite communication market.

Linearity Performance
There are now several suppliers who have accepted the challenge of designing SSPAs using GaN technology—no trivial endeavor. This article describes the performance of Advantech Wireless GaN based SSPAs and it is limited to our known measurements and observations on Advantech Wireless manufactured units. Results from other suppliers might differ, as linearizing GaN SSPAs proves to be challenging, but at the same time rewarding, if successful.

1.    Psat or Saturated Power, it is the maximum power the SSPA will generate. No SSPA should be run at Psat, as the link will only degrade in performance.

2.    1dB is the 1dB compression point. This is really the “Output Power Warning Level”, a level that should not be exceeded. Gain is starting to compress, we only have 0.8-1 dB before saturation, and the link performance will degrade sharply. Higher order modulations will not run at P1dB power levels, as both amplitude and phase of the signal will be affected.

Table 1. GaN based SSPA, single carrier mode, 16 APSK. SNR and Eb/No versus back off.

In a nutshell, Psat and P1dB will not tell us how many carriers we can transmit, or which modulation type. Different measurements are needed to characterize that. Additionally, TWTs do not specify P1dB, so the confusion is even higher if a comparison is attempted with SSPAs.

What is important in single carrier mode is spectrum regrowth. Carrier spillover effect, into some other’s allocated bandwidth, must be kept to a minimum. This is specified as -25 dBc at 1 Symbol offset for commercial applications, and -30 dBc for Military applications. Based on several tests performed, older generations of GaAs based SSPAs will meet the -25 dBc spec at around 4 dB below Psat. (Please see Figure 1 above.) 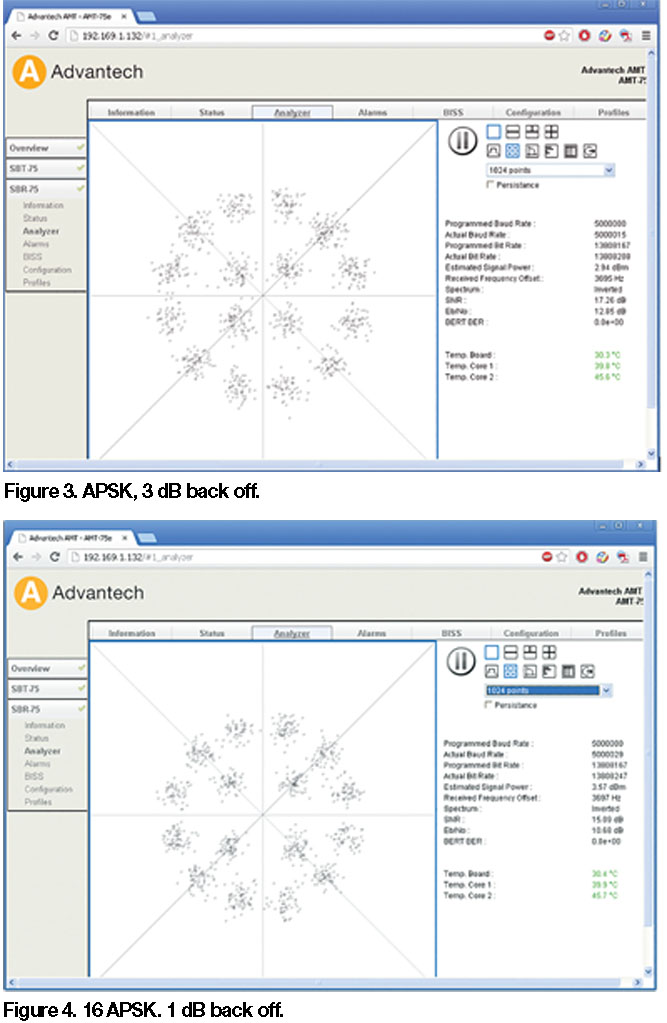 GaN based SSPAs, on the other hand, are much better performing. They will meet same specifications at only 1 dB below Psat. This brings up an important issue:

The conclusion is somehow intriguing. A 250W saturated power SSPA, using older generation GaAs FETs, can be operated in single carrier mode, with higher order modulation, at only 100W. Higher than that, errors are generated that, depending on link margins, might not be permitted. The same 250W saturated SSPA, using GaN technology, can be now operated at 200W, with no degradations in link performance. This is the same as operating a GaAs based SSPA of double power, 500 W. In this context, the GaN based model is clearly a winner, doubling the amount of usable RF power, for the same Psat. GaN technology truly enables DVB-S2 advanced modulation and error correcting codes. To meet the same performance, TWTs will need at least 6 dB back off, and Klystrons 9-10 dB back off. Table 2 on this page presents Advantech’s finding when testing a GaN SSPA carrying 16APSK modulation traffic, from 6 dB back off to saturation.

Multiple Carriers Operation
In multiple carrier mode, the traditional system specification measure is Third Order Intermodulation, or IM3. Generally required is that two carriers, 5 MHz apart each, should not generate more than -25 dBc intermodulation. This was enough when all satellite modems where 70 MHz IF, and transmission was limited to one transponder. Today’s modems can cover full satellite bandwidth, and all transponders can be saturated on a specific satellite, with multiple carriers. However, no specific information exists on how SSPAs behave over multiple carriers. That will be the subject of the following section.

For the purpose of this analysis, a 1.2 KW GaN based Ku-band SSPA was tested starting with 2 carriers and going up to 16 carriers, and IM3 levels were measured. In order to simulate with maximum accuracy the real-life applications, all carriers were modulated, not CW. 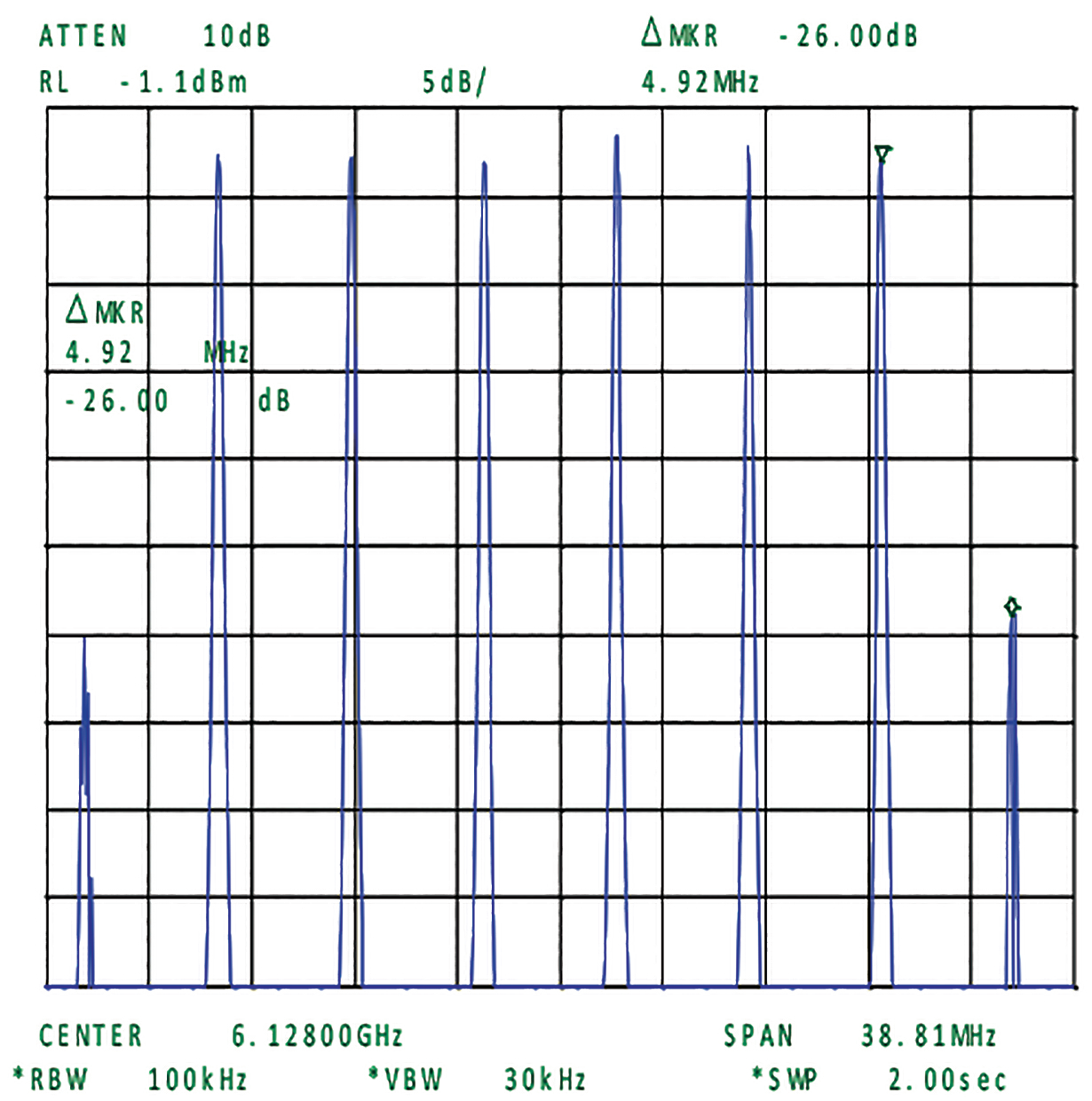 The results were compared with similar published tests results for TWTs. The conclusions are remarkably clear. GaN technology exceeds the performance of TWTs and Klystrons and offers large linear power levels, which are simply not achievable with any other technology. Table 2 below presents the total back off required for a 1.2 KW GaN based Advantech Wireless SSPA, when operated with 1 to 24 Carriers, in order to meet -25 dBc third order intermodulation, IM3.

Of interest is that once 6 dB back off was reached, the total number of carriers do not affect IM3 values. Actually, from 8 carriers and up to 24 carriers, all that is needed is 6 dB back of in total from Psat. Table 3 was built using published information about linearity of 1.2 KW TWT, in the same scenario. The two tables that follow (Figure 2 and Figure 3 above) provide some key information regarding multicarrier operations, in GaN based SSPAs/ TWT.

1.    The GaN based SSPAs level off at 6 dB back off, which means more carriers can be added without additional back off. The TWT on another hand, requires more back off as more carriers are added.

2.    As many as four carriers, both units behave similar, but after that, the difference is significant.

3.    For example, a 1.2 KW TWT, when operated with 10 or more carriers, will only deliver half of the power level that can be achieved with the 1.2 KW Ku-band GaN SSPA.

In other words, a 1.2 KW TWT is not the equivalent of a 1.2 KW GaN SSPA anymore, but is the equivalent of a 500W Ku-band GaN SSPA. This has a major impact on the entire system design, cost wise. Both CAPEX and OPEX will be significantly lower by using just a 500W Ku-band GaN SSPA. The following charts summarize the findings and display the differences between the two technologies. As seen in Figures 6 and 7 below, GaN SSPAs require 3 to 5 dB less back off than linearized TWTs, in multicarrier operation mode, as soon as the traffic exceeds more than 6 carriers.

A Quick Selection Guide
Specifying units as per usual Psat designation is no longer good enough, which makes the job of system designer confusing. What follows is a simple guide to selecting a high power amplifier. Considering that, going forward, more and more use of high order modulation schemes will be seen, as well as higher traffic, the following suggestions will be useful in real life applications. The main assumptions considered here are as follow in Figures 6 and 7:

1.    A maximum 1 deg/dB of AM/PM degradation is required. This is in line with transmitting high order modulation schemes,
VAS in DVB-S2.
2.    A minimum -25 dBc spectrum regrowth is required, in order to eliminate interference between adjacent channels.
3.    The intention is to transmit multiple carriers, high data rate, high modulation schemes, and wide bandwidth, as in any typical broadcast applications.

In multiple carrier mode, for example 16 carriers, a 250W Ku-band GaN based SSPA will be the equivalent of 750 W Ku-band linearized TWT. A 500W Ku-band GaN SSPA can easily replace a 1.2 KW linearized TWT. A 1.2 KW SapphireBlu™ GaN SSPA will have, in the same context, no equivalent in TWTs. From the examples, GaN based SSPAs can deliver maximum power in single carrier mode and require minimum back off in multi carrier mode. However, the difference is even higher when the new generation of modular, very high power SSPAs are introduced. These Advantech Wireless units now deliver 3 KW in Ku-band and 6 KW in C- and X-band, by phase combining multiple units. The main reason is that this approach provides built in redundancy, or soft failure modes. If one unit fails, it will cause the power to drop around 1 dB, which can be easily compensated by uplink power control systems. Replacing a defective unit is relatively fast, requiring on average 30 minutes. However, the unexpected result is that, somehow, these phase combined system perform better in terms of intermodulation than the individual SSPAs used as building blocks. There is a clear explanation for this performance. 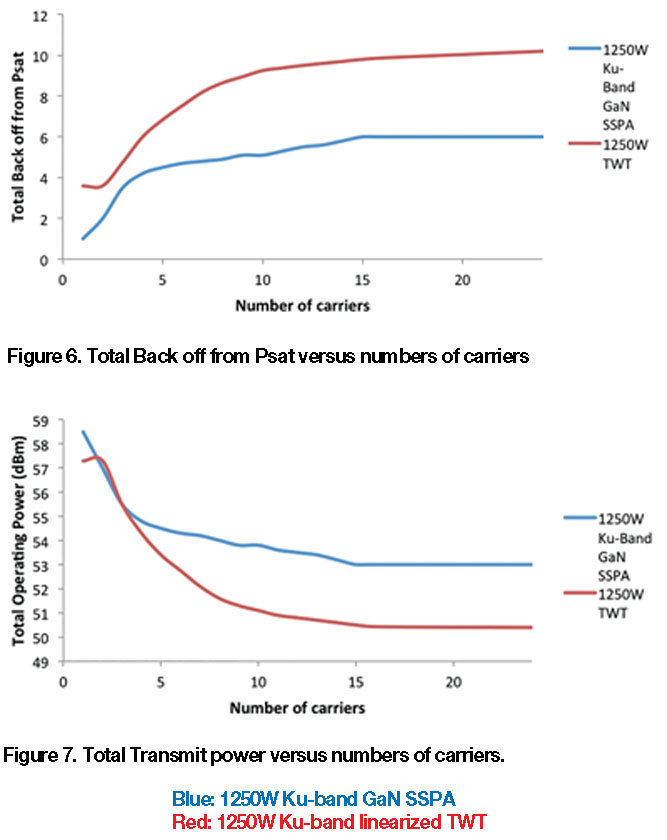 When phase combining multiple units, transmitted power adds coherently, i.e., they have same phase and amplitude. The IM3 products do not add coherently, and in many cases, they will cancel one another. This is visible in a real operating system where multiple carriers generate visible IM3 products on a single SSPA but are not visible on a system including 8 similar units phase combined, even if the back off is the same.

The next figure shows the performance of a 2.5 KW system in real-time operation. Although still run at 6 dB back off, the IM3 products are now cleared, or much improved, and in the noise floor.

IM3 products are better than those of single SSPA, as seen in Figure 8. The 3KW Ku-Band GaN system is now breaking any previous set limits and it can transmit a single carrier at 2 KW, no other TWT or Klystron is able to do that.

The 50 year old debate of SSPA versus TWT is reaching a final conclusion.

They reach power levels with wide bandwidth that are not possible with any other technology. They manage that performance with higher efficiency and much greater reliability. This will be the equivalent of a 6 KW linearized TWT, if available A 6KW Klystron will not be adequate because it is bandwidth limited to 80 MHz only

To our knowledge, these TWTs are not available yet, which brings us to the final conclusion. It seems that finally now, the 50 years old debate, SSPA versus TWT, is reaching to its end. This is state of the art, superb technology and is the future for SATCOM needs, as well as being is the ground base for all new, exciting developments that are just around the corner. 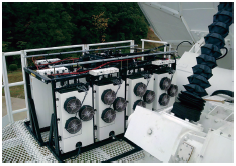 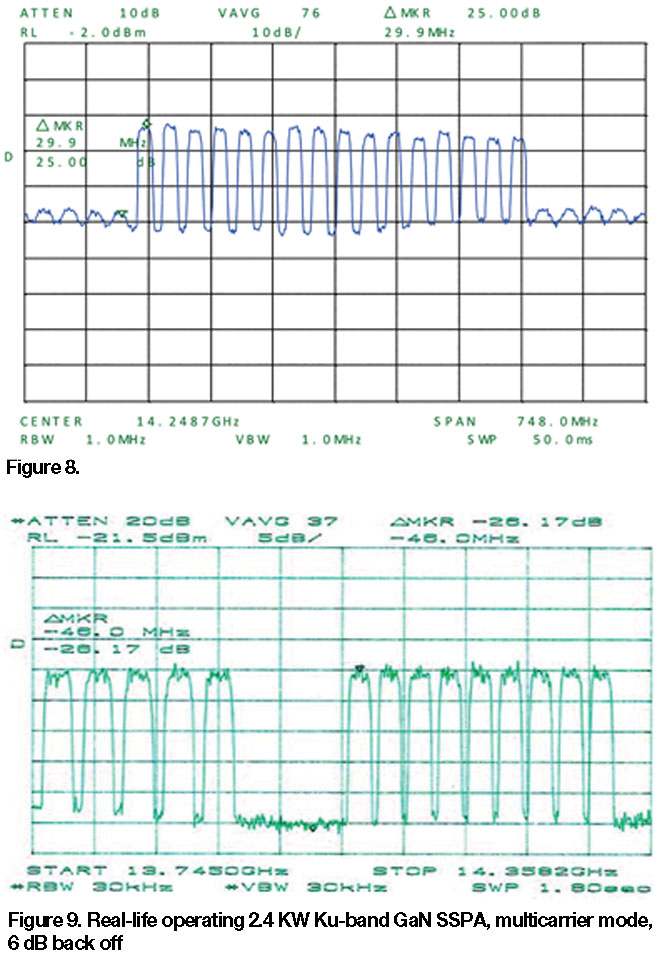 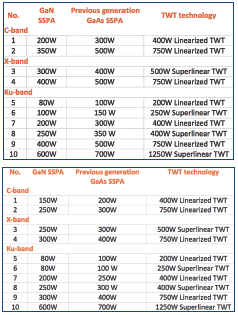