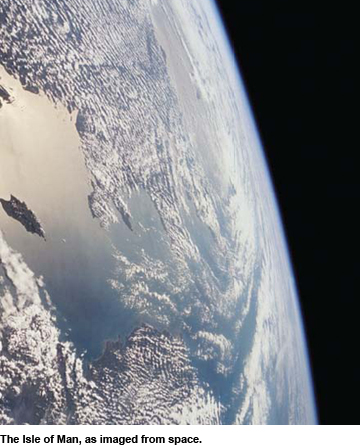 In May 2012, a report published by the Institute of Directors (IOD) in London entitled, ‘Space: Britain’s New Infrastructure Frontier’, focused on the unique growth of the Isle of Man’s space and satellite industry. In a stand-alone section entitled ‘The Isle of Man’s Mighty Space Sector’, the report stated, “In the new space economy, you can be small and succeed. You don’t need astronauts to be in the space business.

“The Isle of Man shows how quickly a powerful niche can be built by a very small player,” the report outlined, identifying the initial driver behind the island’s outstanding success in the sector as being its ability to establish itself as a commercial and neutral base for orbital slots. Thereafter, with a gentle nudge from industry, the Isle of Man Government was “shrewd enough to see the advantages of declaring zero corporation tax for companies engaged in space related activities. Together with business-friendly legislation, generous grant-aid and a robust telecoms infrastructure, the island has become a magnet for the space and satellite sector.”

Incredibly, this has all happened over a period of just a little more than 10 years.

The report’s unveiling at the IOD’s London headquarters was attended by a delegation from the Isle of Man, including Tim Craine, the Government’s Director of Economic Development, who is also a trustee of the International Institute of Space Commerce.

“It is highly significant that the island has received the recognition and praise for its space sector from a prestigious body such as the IOD and is further evidence of the strength of the sector and significant interest that the island’s space industry attracts,” said Mr. Craine.

“The Isle of Man is an excellent example of a small economy with a thriving space sector, with more than 30 companies handling the financing, insuring, leasing and legal ramifications of global space assets.”

Among a number of other third-party independent accolades, the Island was also recognized as a favorable location in a February 2011 Report by the U.S. market research firm, Futron, which highlighted the Isle of Man’s cutting edge satellite financing. The study, entitled “Innovative Strategies for Space Competitiveness” stated that “the Isle of Man’s unique approach to space activity allows it to punch above its weight in terms of global visibility in the space industry. [We] imagine other nations and jurisdictions will look to the Isle to replicate its success,” the Report added.

Even some of the island’s closest competitors have been prone to casting admiring glances at the Isle of Man’s achievements. In the February 2012 Oxford Economics Report for the Government of Guernsey—a similar offshore U.K. Crown Dependency—focused, in part, on the strengths of the Isle of Man’s space industry.

Recognizing the island’s “specialism” in space commerce and that the Isle of Man Government was actively promoting the island as a centre of space excellence, the report stated, “At present, the space commerce industry’s profile on the Isle of Man is significant, with numerous global firms present and the Google Lunar X Prize being hosted in 2010. Economically, the industry provides significant high-value added activity on the island. Wider benefits, in terms of attracting visitors and potential future investors via the Lunar X prize (and potential future events) will help to build the island’s competitiveness and attract global publicity.”

Commenting on the Oxford Economics Report, Mr. Craine said, “We make no bones about our enthusiasm for promoting the island as a centre for excellence in space commerce, but it’s always nice when a competing jurisdiction highlights the Isle of Man’s strengths in space.”

As the saying goes, ‘Good news travels fast’ and, while most pertinent to the space industry, the Isle of Man is living proof that there is truth behind that saying.

The advantages available in the IOM and the subsequent burgeoning space industry has created an entire secondary space related industry on the tiny crown dependency in the Irish Sea. 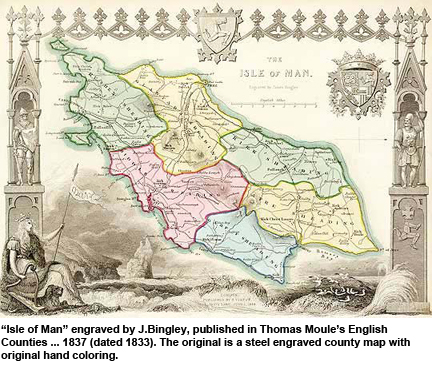 In terms of the island’s space sector breakdown, 45 percent is focused on orbital filing, with an identical percentage dedicated to the procurement, finance and insurance of space assets. The remaining 15 percent is split between manufacturing, “new space” and not for profit organization.

While space manufacturing may account for a small slice of the overall sector, it is not insignificant. For example, CVI Technical Optics have made all the optics for this August’s NASA’s Mars Science Lab mission. Since December 2011, the island has been able to boast one highly advanced satellite in its own slot—ViaSat 1 registered at 115 degrees West—which covers all of North America and Hawaii.

Among a number of Isle of Man headquartered Not for Profit Organizations (NPO’s aka NGO’s) is the Space Data Association (SDA), the international alliance of satellite operators that supports the controlled, reliable and efficient sharing of data critical to the safety and integrity of the space environment.

The SDA, which was established by Isle of Man based companies such as Inmarsat, Intelsat and SES, has recently been awarded the Space Risk Management Award by the organizers of the World Space Risk Forum 2012 for its outstanding cooperative efforts to reduce the risk of satellite operations.

The Isle of Man even has its own thriving satellite campus, which is part of the International Space University in Strasbourg. In the past 25 years, 3,500 students have graduated from the campus, of whom more than 100 are now working on the island.

“We’ve all worked hard to make the Isle of Man a great jurisdiction for the global space industry. We’ve all worked hard to ensure that the Isle of Man ‘speaks space’,” said Chris Stott, one of the world’s leading space entrepreneurs who is also Chairman and CEO of ManSat, an organization described in the IOD report as the Isle of Man’s home-grown space champion. ManSat is Government approved and manages the satellite filing process in partnership with the Island’s Communications Commission on behalf of island-based companies all the orbital filing slots that go before the International Telecommunications Union (ITU) in Geneva.

As for the island’s meteoric rise in space commerce, there might even be a degree of inevitability attached to it. Clearly, the Isle of Man has a talent for adapting to the industries of tomorrow. In the past, the island’s economy has moved seamlessly from farming to banking and financial supervision, from the film industry to e-commerce and e-gaming. And now, it has planted its flag firmly in the space sector.

Furthermore, given the island’s well established network of support services, in key areas such as legal, corporate and fiduciary, it’s easy to see that there has been a ready-made supply of companies capable of handling financing, procuring, insuring, leasing and administration services for space assets.

“We often say that any companies in the space industry can’t really afford not to look at the Isle of Man and all that it has to offer,” said Tina Rawlinson, Director of Cavendish Trust, one of the island’s leading trust and corporate service companies that works closely with the satellite sector.

“Going forward, we are confident that the Isle of Man will be able to expand further and consolidate its position as a global leader in space commerce, especially given the extensive network of specialist service support companies on the island together with our world class telecoms infrastructure,” she said.

On or off-island there is no shortage of space related events and activities where the island plays a significant role. The third European Space Tourism Conference has just been held in London which featured the unveiling of the cislunar capabilities of Excalibur Almaz, the international commercial space transportation company based in the Isle of Man.

The island continues to offer strong support for space education. This month the Isle of Man hosts the Space Habitation conference aimed at creating a new global undergraduate international space school based on the Island.

In a world gone mad, the jurisdiction has proven itself to be a safe regulatory and financial home for the space industry. With the continued growth in satellite communications and the Isle of Man’s noted strengths and ever increasing experience in global satellite procurement, finance and insurance, there is every sign that the island’s space sector will continue to flourish.

“As the industry continues to grow, the Island will continue to be here.  We have political, regulatory, and financial stability, coupled with the Rule of Law and a true understanding and welcoming of the space industry.  Space is a priority for our economy,” said Cavendish Trust’s Tina Rawlinson.

While the future for the Isle of Man space sector looks assured, this may well include closer collaboration with neighboring U.K. Intriguingly, the U.K.’s Economic Policy Centre in Space Report 2010 entitled ‘Space: Britain’s New Frontier’ said that the Isle of Man had carried out a conspicuously successful policy of exploiting its favorable corporate operational environment and that the U.K. itself should use its flexible links with the Isle of Man to encourage more space businesses to come to the British Isles.

The report suggested that the U.K. and the IOM should be viewed as a special-purpose confederation, whose uniquely flexible in-and-out relationship with the European Union allowed companies and technologies to operate within the EU when advantageous, and outside of the EU, when not.

“British space policy should not seek to hinder this attraction to space businesses. Rather, it should copy the IOM’s policies to the extent they are able to aid companies to relocate operations strategically on the IOM,” the Report recommended.

It’s a view with which the Manx Government would concur. “For the U.K., there is plenty of scope for further co-operation close to home,” said Craine.

Boasting the world’s longest continuous running Parliament, the Isle of Man has a rich history but, according to ManSat’s Chris Stott, the Island also has a wealth of reasons to look to the future. “A jurisdiction that is 1,033 years old didn’t get this way by accident.  We always take the long term view.  We are always looking to the future with the focus on education, regulation and jurisdictional neutrality to all comers,” he said.

“Space is the future of the human race.  We are only just starting to understand its value and utility to the world.  Commercial services from space drive the entire world’s communications backbone and information super-highways and yet this is still only the beginning.  The Island is not here to judge the risk of future markets, but rather to ensure a level regulatory playing field, a level launch pad, to enable success for companies working in space markets at any level,” added Stott.

Clearly, the Isle of Man is a jurisdiction that does not see space as the final frontier.

Editor’s Note:
The article’s introductory image of the Isle of Man was taken from the International Space Station by Col. Ron Garan 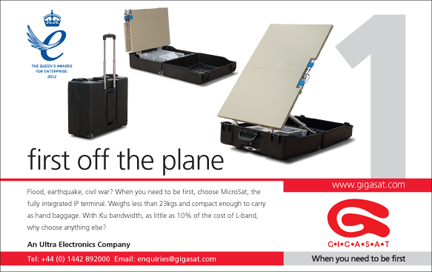