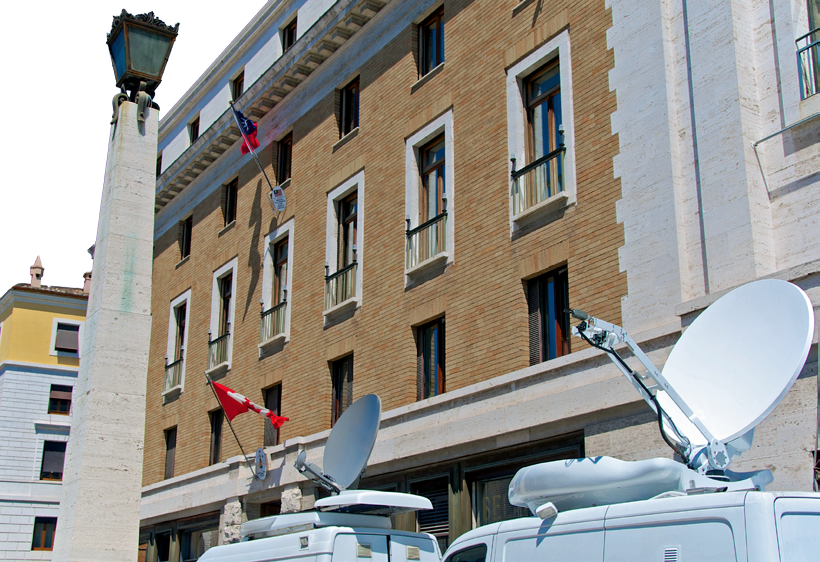 This equipment is usually part of the overall station specification and is installed along with the transmission and receive chain systems and has a significant role in both commissioning and day-to-day operation.

However, the same is not true of more portable satellite communication (SATCOM) systems where space, weight and cost are premium considerations and where, until recently, factory testing of the system has often been considered adequate for much of the duration of the equipment’s lifetime with occasional return-to-factory checks and calibrations.

Mobile, compact and fly-away terminals now dominate the SATCOM scene and are tasked with carrying an ever increasing variety of traffic, much with the same need for system and carrier integrity as the larger fixed Earth stations. Just the same, however, there is still no room for BITE within the system without compromising those features that have made them so successful—small size, light weight and relatively low cost. 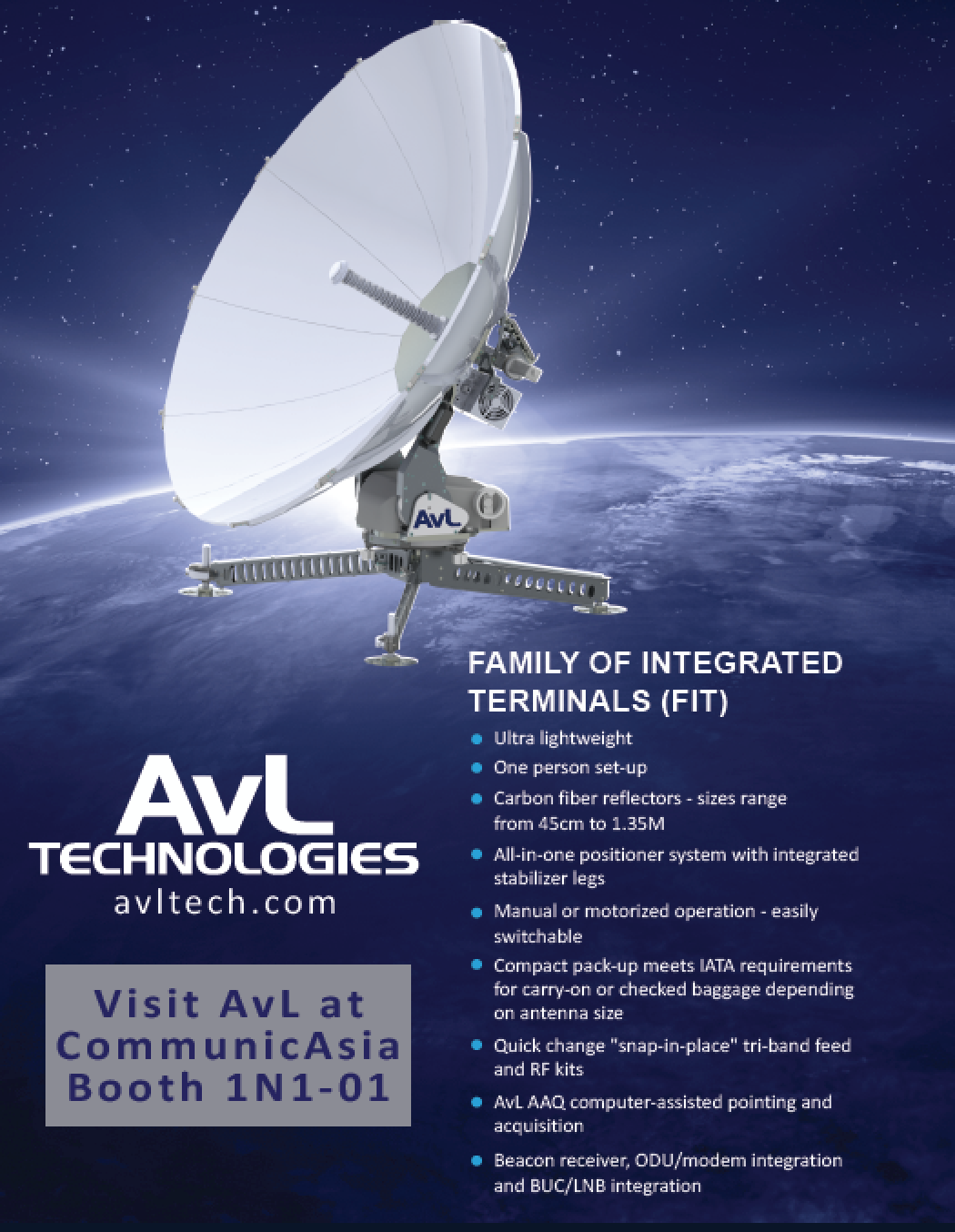 Enter the satellite simulator. Such a device makes its living by pretending to be a communications satellite. Placed in the beam of a SATCOM antenna mounted on, or within, a vehicle, airplane, train or ship, the simulator interacts with the System Under Test  (SUT). Such facilitates a full range of frequency, amplitude and spectral purity tests that can be carried out along with other system functionality, frequently and cheaply, thereby optimizing effectiveness, not only of the SUT but of the full ground-to-ground link.

In the Van
Nowhere is this of greater value than with the Satellite News Gathering (SNG) van. This is expensive equipment and its true worth is measured by its ability to be at the scene of breaking news or delivering live pictures and sound by Outside Broadcast (OB) from an event.

A television station’s main financial indicator is, of course, the advertising revenue with ates running into the millions of dollars per viewing minute. The SNG van’s cost may be dwarfed by the income generation, but the vehicle’s value is with its reliability, which is paramount. How to ensure that reliability?

One way is to carry out a test transmission to ensure that every part of the SNG system is functioning as it should. This might mean taking the van to a location with a clear view of the satellite, setting up, going online at a time and channel pre-arranged with the satellite operator, spending an hour or so testing, noting what is not as it should be, driving back to the depot, fixing the problem and then making a return trip to the clear sky spot and checking again.

This is all quite an expensive procedure, not only with equipment and personnel tied up, but also consuming costly satellite time—with the added risk of incurring the wrath of the satellite operator if the SNG system is not on its best behavior. Add to this the risk of potential losses of advertising revenue and program costs should the transmission be lost and the value of an off-satellite test facility can clearly be seen.

The new and smarter regime is to thoroughly test each SNG van in the depot before it is assigned to the news or OB event. Trucks are then ready-to-roll with a higher probability of successful transmission and at a fraction of the cost.

UK-based SATCOM RF testing equipment company, AtlanTecRF, recognized this gap in the market and, as a result, developed their SNG specific Satellite Simulator System (pictured in Figure 1, above).

AtlanTecRF has devoted considerable development time and effort toward producing RF and microwave test systems which assist manufacturers, installers and users alike in achieving the desired performance from their ground stations, whether fixed or mobile. Ground, in this case, includes airborne systems, commercial and military.

The SNG Off-Satellite Solution
Building on this expertise, the company recently tackled the needs of the mobile SATCOM industry with the development of their portable Satellite Simulator product line. The AtlanTecRF SNG series of Satellite Simulator Systems is an evolution of this product range and is aimed squarely at the SNG and OB communities.

The new SNG Satellite Simulator is designed to provide a loop-back test for vehicle mounted Ku-band SNG antennas without the need to access the satellite. Comprised of two units, the Satellite Simulator is either depot based (this set up is illustrated in the graphic in Figure Two) or portable, thereby facilitating the testing and calibration of SNG and OB systems off-satellite.

The base control unit is a convenient, portable bench instrument with local and remote capabilities, Ethernet controlled, and this is connected to a wall or mast mounted, weatherproofed transponder via a power and a data cable. 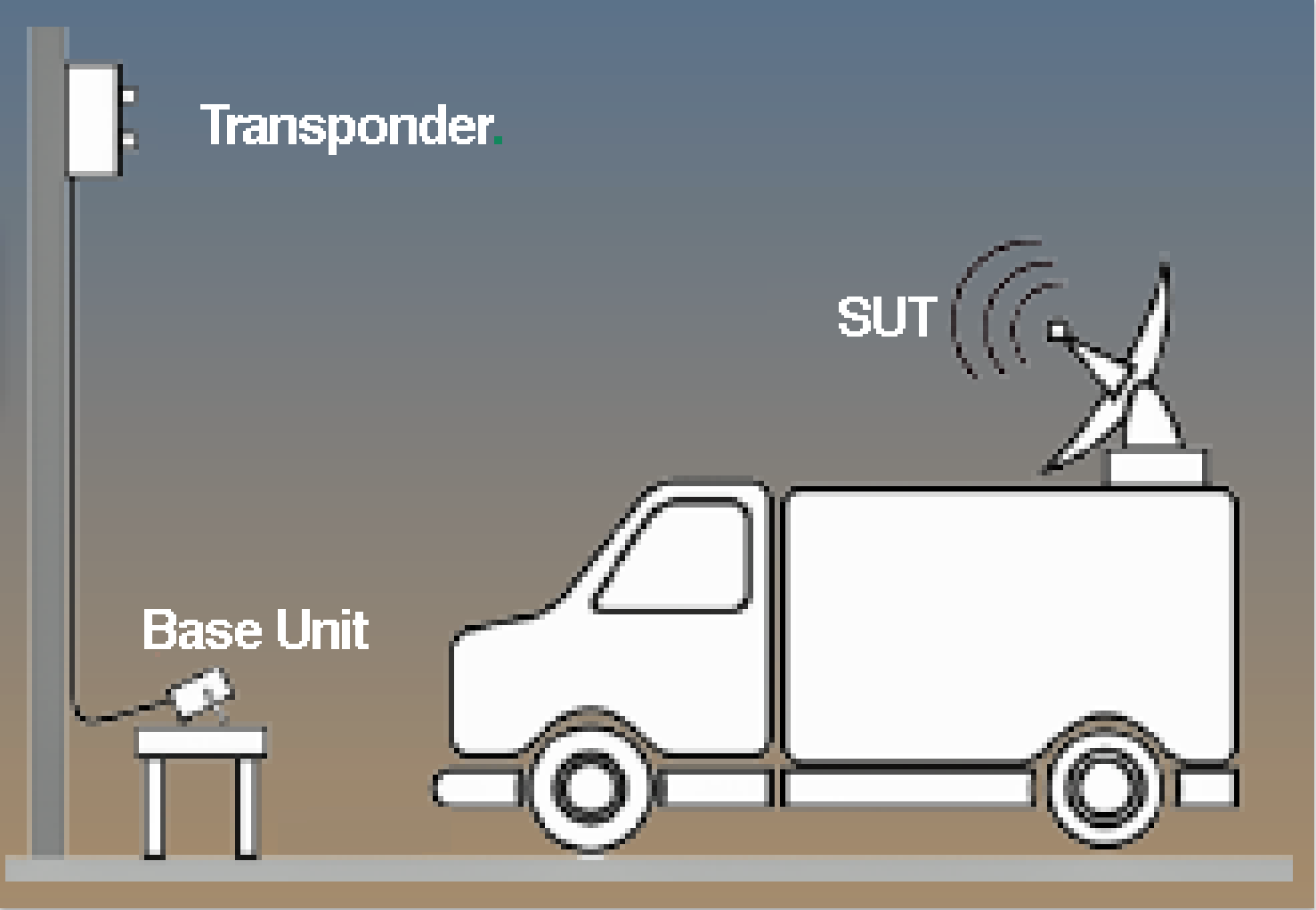 The nominal path loss is 0dB but there are options to increase the transponder conversion gain to suit the requirements of individual users and locations.

The local oscillator in the transponder is synthesized over its 1.75-3.3 GHz range, in 25 MHz steps. This is managed using either the front panel controls on the base unit or via Ethernet with a GUI and input signal level similarly controlled over a 60dB range in 0.5dB steps, thus accommodating varying range distances from the SUT as well as a variety of Tx power levels.

Local oscillator stability is derived for an internal OCXO reference providing better than +/- 0.05 ppm over an operating temperature range of -10 to +50C.

The spectral purity performance is designed to be comfortably adequate for SATCOM test set up with phase noise of the local oscillator at typically -95 dBc/Hz and non-signal related spurious at -60 dBc.

In addition to the transmission of the Rx frequency direct to the SUT antenna, a sample of this, at nominally -25dBc, is fed back via coaxial low loss cable to the base unit and is then made available at the front panel for connection to a spectrum analyzer or other test equipment.

The standard system operates from an AC supply of 90 to 240 volts, 50 to 60Hz, and there is an option for rechargeable battery power, in which case the battery charger is included as part of the turnkey system.

For broadcasters, the SNG Satellite Simulator System offers a most convenient and cost effective alternative to on-satellite alignment and set up of vehicle-borne SNG systems and avoids the time-consuming and risky process of testing live on the satellite.

With speed and certainty of operation critical in delivering breaking news to TV audiences, and with news gathering systems reliability of paramount concern, the AtlanTecRF SNG range of Satellite Simulators provides the test solution the news gathering industry has long been waiting for.
atlantecrf.com/sng-satellite-simulator.htm

Geoff Burling is AtlanTecRF’s CEO. His role is to drive growth across all aspects of the business by bringing to market a range of new and high quality RF and microwave components, interconnects and equipment. He sets the company’s long-term business strategy and takes the lead in building customer relationships and developing employees.

AtlanTecRF is a leading global manufacturer of RF and microwave equipment, components and interconnects to the Satellite, Broadcasting, Aerospace, Telecommunications, Defense and Scientific Research industries.

All products are manufactured to ISO 9001:2008 standards.