At the time of this writing it is predicted that by November 1, 2012 we will witness 142 spacecraft involved in 78 launches1. This tally includes seven satellites deployed from the International Space Station. As to their purpose, an analysis is provided in the two tables on the following page. 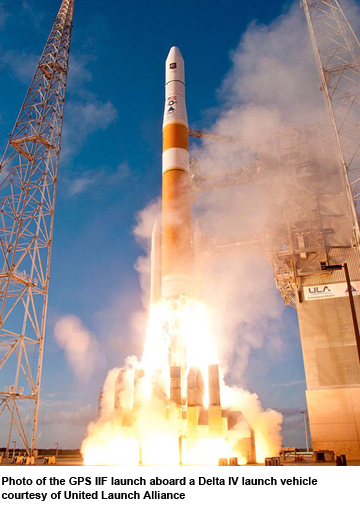 Two launch vehicles failed to place their payloads in orbit. Plus, this was the first year that the U.S. no longer had its own capability to send astronauts into space, and, in particular, to the International Space Station. Instead, by the end of the year, the U.S. will have flown four astronauts to the ISS via a Russian Soyuz TMA spacecraft at the cost of $63 million per flight.

There is some glimmer of light on the horizon, now that NASA has contracted and financed three proposals for the Commercial Crew Development (CCDev) program for further development.

Of these three proposals (SpaceX with a crewed version of the Dragon cargo craft, Boeing with the CST-100 spacecraft, and Sierra Nevada, with the winged Dream Chaser®), the Space X proposal seems to have advanced the furthest, with two of the Dragon cargo craft having docked with the ISS. Also, Blue Origin, with the New Shepard, even though no longer part of CCDev, conducted a successful launch abort test of its proposed spacecraft.

With President Obama having been re-elected for another four years, the author believes there will be little change in the approach towards space. Instead, it can be expected that there will be more bad news for space. Having said that, the author does not believe that it would have been any different if Mitt Romney had been elected.

Budget restrictions will, undoubtedly, continue, affecting not only major programs, such as the James Webb Space Telescope (JWST) that has been further delayed to 2018—however, such also impacts on smaller programs. 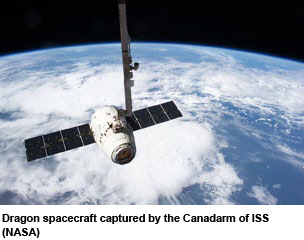 An example of this was the cancellation of the Gravity and Extreme Magnetism (GEMS) mission, which was to be the 13th mission in NASA’s Small Explorer (SMEX) program.

Although this involved relatively little money, the program was cancelled due to an overrun in expenses. While possibly not the case for GEMS, this cancellation was a good management move and a warning to scientists and engineers that you cannot submit a low bid, get it accepted, and then rely on payments for over-expenditures. Instead, scientists and engineers should provide realistic bids that take the possibility of over-expenditure into full account.

The U.S. budget cuts have also taken its toll on European programs, as well. During 2012, the U.S. cancelled its participation in the European Space Agency’s ExoMars program as a result of the on-going stand-off between the U.S. Congress and the President. The unfortunate element is that the cancellation of the U.S. participation, in spite of a restructure of the program, could ultimately lead to the cancellation of the entire ExoMars project. What the long term effect of this may be on U.S./European cooperation in space is anyone’s guess. The machinations by the U.S. have impacted upon the European space efforts before: Remember Spacelab, which was such a great idea, but eventually was shipwrecked by U.S. decisions. 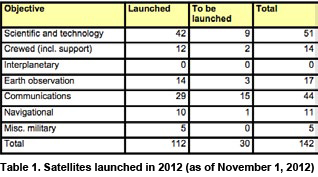 Unrelated, but equally far reaching, was the European Space Agency’s decision to stop production of the ATV cargo spacecraft after the remaining two spacecraft had been launched in 2013 and 2014. The decision to do so is attributed to obsolescence as well as waning political support.

A proposal to redesign of the spacecraft and provide it with a hardened re-entry capsule was recently dropped, as it would require major upgrades and a redesign of the avionics system. 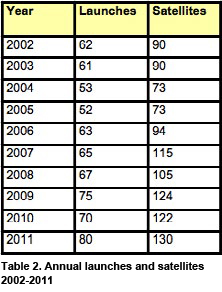 The expectation is that now commercial flights by U.S. spacecraft will make up for the lost capacity with the close of the ATV program.

In Russia, problems of a different genre were encountered. In the wake of the failure of a Proton M/Briz M to place two satellites into geostationary orbit on August 7, 2012, the head of Khrunichev (the state owned company that produces the Proton M as well as the Briz M) resigned the day after Russia’s Prime Minister reprimanded space officials over a failed launch. The Prime Minister stated that the failures tarnished Russia’s image as a “leading space power”.

He further ordered the Russian space agency, Roscosmos, to take practical measures to improve the quality of work in the space industry. He did not consider the ageing production base, low-quality electronics, and shortage of skilled human resources as a justification for the failures. In the past year-and-a-half, Russia suffered seven failures and 10 satellites were lost.

It seems more and more likely that, while the commercial space effort in the shape of communications and (some) Earth observation satellites is flourishing, government funded space exploration effort is gradually grinding to a halt, not just in the U.S., but also in Europe and Russia. The only ones that seem to be moving forward are the Chinese. Or, are they?

Following 18 successful launches in 2011 that placed 17 Chinese and four foreign satellites in orbit, China planned to maintain the pace in 2012 and announced a plan for 21 launches to place 30 satellites in orbit. This was part of a plan to conduct 100 launches in the 2011 to 2015 period. It is expected that, by the end of the year, the Chinese will have conducted 16 launches, placing one Chinese satellite into orbit as well as three non-Chinese satellites. This compares with the U.S. (13 launches, 31 satellites) and Russia (26 launches, 37 satellites).

However, China is certainly ‘on the move’—the country successfully launched the Shenzhou-9 mission that docked with the Tiangong-1 docking module and has continued to expand the Beidou navigational satellite system. 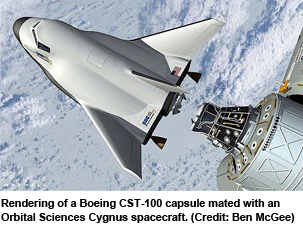 Not all was gloom and doom.
On February 12, 2012, the European Space Agency successfully launched the new Vega vehicle that fills a gap in the marketplace for smaller payloads. The Mars Science Laboratory (MSL), also known as the Curiosity Rover, landed on Mars on August 6, 2012, and started the commencement of an exciting exploration of the Martian surface. The Curiosity Rover’s arrival and landing was a demonstration of new and exciting technology. Approaching Mars, MSL’s interaction with the atmosphere started at 1100km altitude. After a re-entry phase of about seven minutes, and at an altitude of 125km, the spacecraft’s 15m diameter parachute was deployed, following which the heat shield was separated. At an altitude of 20m and 12 seconds before the landing, the upright rover was lowered by the sky crane structure, which was powered by eight descent engines to the surface on a 7.6m tether. The sky train then flew away from the landing site and was dumped in the immediate Martian surroundings as were other components that were involved in the landing and no longer of any use. Early information sent back by the Curiosity rover indicates that some exciting results can be expected during the first year of operation. 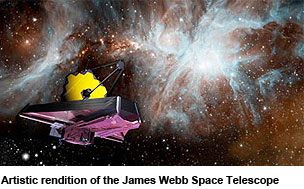 On a less spectacular scale, the U.S. was also expected to launch the first X-37B military spacecraft on its second mission (OTV-3) before the end of the year.

There has also been an increase in the number of CubeSats launched this year. A total of 26 CubeSats will have been launched before the end of the year. As many as another 18 could have been added to this score if a Russian Dnepr 1 launch had not been postponed until early 2013.

These small 1kg platforms, whether placed in orbit in their single (1U), double (2U), or triple (3U) unit configurations, have made space access far more affordable for smaller institutions. A large number can be fitted virtually anywhere within a launch vehicle’s fairing where there is available space, such as the 11 that were mounted at the base of the Centaur upper stage that was launched on September 13, 2012. The use of CubeSats have seen Hungary, Poland, and Rumania join the ever-growing list of space faring nations 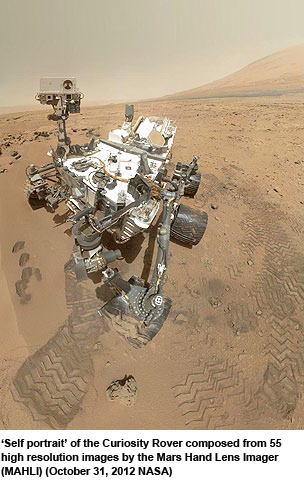 The space related activities of Iran and North Korea continue to ruffle feathers in western nations as the launch attempts are being seen as disguised tests of ballistic missiles that could carry nuclear weapons. Both countries suffered one launch failure during the year—Iran did manage to orbit one satellite.

In both countries, and totally separated from the military value, the space program is a matter of national prestige—these countries can inform their citizens that they are on equal space terms with the powerful U.S., Russian and Chinese programs. This has led to a very unusual move by the North Korean regime, when 200 foreign journalists were taken to the launch site on April 8, 2012, to view the launch vehicle. As a result of the presence of the journalists, North Korea had to officially admit the failure of their April 12, 2012, launch.

Another nation that pushed ahead with its space programme, in spite of the poverty in the country, is India—there are plans for manned flights and Mars missions. Interestingly, the launch of an imaging satellite by India (RISAT-1 on April 26, 2012) and a ballistic missile test did not seem to concern western countries.

2012 was also the year wherein Neil Armstrong passed away, on August 25, 2012. After his legendary spaceflight on Apollo-11 and his famous first step on the Moon, Neil became a living, national treasure for the U.S. and, intentionally or not, never attempted another spaceflight. 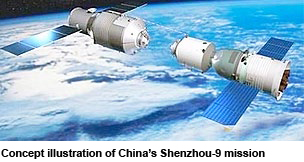 To the entire world he became the man who uttered what is perhaps the most famous sentence of the 20th century,

“One small step for man, one giant leap for mankind.”

Armstrong was described as ‘a reluctant hero’, and, as a former Navy officer, his ashes were scattered at sea.

At this point in time, John Glenn is still with us. He is now 91-years-old—only two of the six astronauts that flew on Mercury remain alive.

One could certainly state that 2013 is going to be a year filled with launch challenges.

1This may vary with the launch forecast selected. 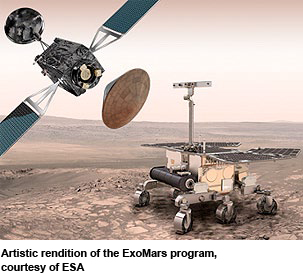