STN, the Satellite Telecommunications Network, transmits more than 600 TV channels and delivers global services via satellite and fiber from their massive, cutting-edge, teleport facilities in Dob, Slovenia, in the European Union (EU). 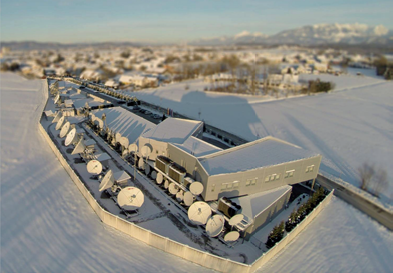 STN provides SD/HD/UHD video and audio broadcast and IP point-to-point data services over satellite with extensive coverage over Europe, the MENA region, Asia, Africa, Australia, as well as North and South America. For their video customers, STN provides playout, encryption, and channel localization services and supports a range of customers, from startup channels to global media leaders, all with rapid and efficient deployment service success.

As of this writing, STN operates 21 transmit antennas that range in size from 2.4 to 9 meters as well as 65 receive antennas from 1.8 to 9 meters in diameter. STN accesses dozens of C-, Ku- and Ka-band satellites for worldwide coverage. More than 5,400 Rack Units of equipment at the teleport provide signal processing in support of a wide variety of services, including network security, and state-of-the-art video format transmissions. STN’s L2 fiber network and IP infrastructure access worldwide POPs at major, global, metro data centers and direct fiber access to two tier 1 ISPS with multi-Gbps connectivity options.

De-Icing System Crucial
As is the case in many locations around the world, winter at STN’s facility means the occasional snowfall. Winter storms can accumulate snow and ice on buildings and structures. Satellite Earth station antenna performance can be severely degraded by the accumulation of snow and ice, causing signal degradation—even outages—if not managed properly. 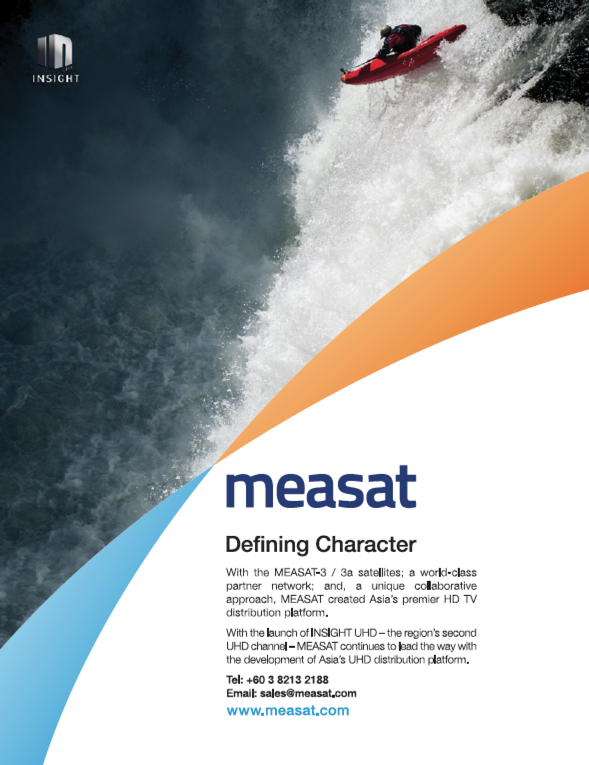 W.B. Walton Enterprises, perhaps more famously known as Walton De-Ice, is now in its third decade of providing solutions to help protect critical satellite networks from degradation and outages due to weather and is the leader in this segment. The company designs and manufactures the broadest and highest performance line of de-ice equipment available for satellite Earth station antennas: the firm’s original Hot Air (Plenum) design mounts behind antennas from 3.7 to 32 meters, while the Walton De-Ice Snow Shield, Rain Quake, and Ice Quake, electric and gas forced air De-Icing systems protect 0.6 to 6.3 meter antennas. Walton De-Ice has refined their field-proven, Hot-Air De-Icing system with a unique hot-air enclosure that mounts directly behind the antenna. STN employs this system on transmit dishes, such as those in this photo.

Technical Challenges
Pad Heating and Heat Tape methods offered by some other anti-icing manufacturers can use heated elements attached to the rear of the reflector. These units can produce high antenna gain losses (up to 6 dB). Non-uniform heat applied to the antenna structure can cause de-focusing and reflector efficiency degradation.

This kind of performance degradation can reduce signal availability, worsen link margins and even increase the required space segment resources and cost of delivering acceptable services to end-users as well as consume more cumulative energy in order to warm up and operate in an effort to combat the effects of snow and other inclement weather.

It’s All Hot Air
The Walton De-Ice plenum solution offers several advantages over electric pad or heat tap anti-ice systems—the circulation of hot air provides uniform surface heating of the antenna’s reflector, radial supports and hub. Heaters (Gas or Electric) are attached to the antenna structure and plenum to heat the air that circulates through the Plenum.

The reflector surface is heated, thereby preventing snow from accumulating. The heating results in a totally effective elimination of ice. As a result, the plenum Hot-Air De-Ice technique minimizes the negative impacts of heat distortion, and offers the most energy-efficient and powerful options mitigating snow and ice on antennas.

Plenum systems re-circulate hot air into an enclosure behind the antenna reflector. Automatic temperature sensing and integrated control of the Walton De-Ice Plenum ensures that sufficient heat is uniformly applied to the reflector surface, radial supports and hub to minimize the thermal effects on antenna gain.

“To ensure our clients’ continued and uninterrupted transmission during strong alpine winter conditions, a reliable de-icing system is crucial,” said Jurij Blazin, Technical Director for STN. “Having enjoyed successful experiences with prior Walton De-Ice systems, we upgraded to the gas version, keeping the previous electric based system as back up support,” explained STN’s Jurij Blazin.

The design itself minimizes thermal expansion of an antenna structure. Temperature distribution is controlled with the use of circulation fans and heat distribution systems within the plenum. A Temperature Balance Controller is integrated into the standard automatic Monitor and Control Units to measure, control and optimize surface heat distribution in real-time.

Striving For Energy Efficiency
Pad or heat tape-based anti-icing systems employ electric heater elements. In order to provide maximum flexibility, Walton offers electric, natural gas, methane and liquid propane gas heaters which enables the customer to make the proper selection based on the cost and availability of the fuel source at their location. Depending on the specifics of an Earth station location, electricity, liquid propane, methane, or natural gas may be among the most cost-effective and energy efficient choices. Teleport operators concerned about ISO 50001 energy management qualifications may prefer to use natural gas or liquid propane.

One of the first considerations when deciding which type of fuel source to use is the availability of the fuel source. Electricity may be more available than natural gas, methane or propane gas; however, the gasoline fuel option can be more cost-effective in a large number of locations. 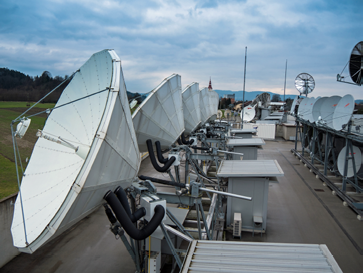 Factors that Earth station operators need to consider in deciding which type of energy source to use include: the cost and ease of reliable fuel delivery to the satellite facility, type of electrical cabling (above ground or underground) and availability of sufficient gas line pressure to power the required number of antenna heaters and de-icing systems in a teleport.

Natural Gas is measured in cubic feet or hundred cubic feet (CCF) and typically sold by the therm, while liquid propane gas (LPG) is sold by the gallon or weight—electricity is sold by the Kilowatt-hour. These different ways of measuring and selling the energy sources, coupled with multiple heaters in different sizes, makes the comparison of various energy costs difficult to judge. In order to simplify the comparison, design engineers and planners can convert resources to cost-per million-BTU’s and then calculate the cost of operating the number of heaters needed for their facility.

With electric heater systems, an electricity bill will increase even when the de-icing systems are not running during off-season months, due to higher peak usage during winter months for the de-icing system operation. After making the various calculations, and considering all of their needs, STN decided to move their primary de-icing heat method to gas heaters. 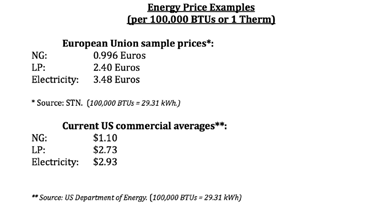 Results
According the company, Walton’s CE-certified gas heaters combined with the Walton De-Ice Plenum system offer higher performance and reliability than prior releases and deliver the most rapid and cost-effective solution for preventing snow and ice buildup 24x7 at the lowest operational cost for an Earth station antenna. For existing antennas, the new Walton Gas Heater is also easy to upgrade as the same wiring and mounting configuration as Walton’s original heaters is used.

The STN upgrades are expected to yield operational efficiency benefits in the future, according to Blazin. “As STN’s antenna farm is growing year-on-year, power consumption increases. To maximize energy consumption efficiency, we decided to upgrade our systems with Walton De-Ice’s latest gas heaters, which not only reduces costs but also provides redundancy and reliability.”

STN teleport managers can enjoy the peace of mind that comes from knowing that their antennas are “weather protected,” thanks to automatic de-icing operation with moisture and temperature sensing and thermostat-like activations and de-activation, along with Walton’s technical and installation support services available that are available worldwide. This allows the STN staff to focus on other teleport projects, such as delivering the highest levels of customer service and the teleport’s expansion to an adjacent 10,000 square meter property to meet future growth.
www.de-ice.com

Dan Freyer is President of ADWAVEZ Marketing LLC (www.adwavez.com), an agency that is focused on providing marketing services to the satellite industry. He has helped top satellite manufacturers, operators, service providers, equipment suppliers, and associations develop and grow their businesses for more than 20 years. He is the author of Liftoff: Careers in Satellite, a contributor to The Satellite Technology Guide to the 21st Century, among numerous other industry publications. He can be reached at dan@adwavez.com.

When STN (Satellite Telecommunications Network), a major satellite broadcasting and data center in Europe, needed to maintain the highest uptime during winter conditions, the company turned to Walton De-Ice to protect their antennas’ systems from snow and ice buildup using the firm’s Hot-Air system. The Plenum attached to the area of the antenna circulates hot air to uniformly heat the reflector. A larger antenna may require several heating units to be activated during a snowstorm. 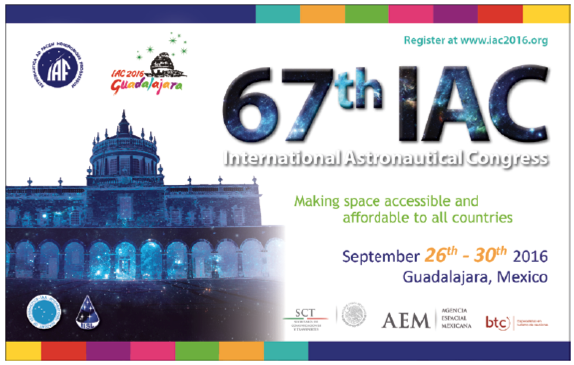