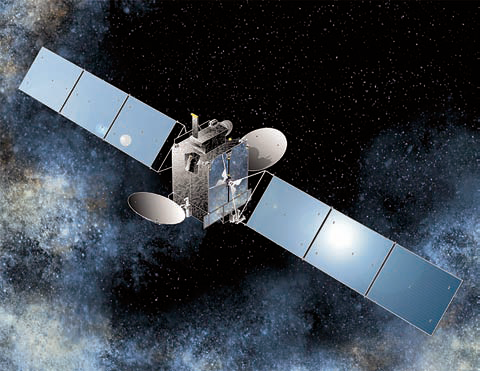 Artistic rendition of the Optus 10 satellite.

Under the agreement, Optus will provide ITC Global with expanded satellite capacity, equipment hosting, up-linking and downloading services via its major satellite facility, located in the northern Perth suburb of Lockridge, Western Australia.

Optus’ Lockridge facility is both a domestic and international gateway for satellite services across Australia and regions to the west, around the Indian Ocean and into Europe.

ITC Global specializes in satellite-based communications for industrial operations in extreme environments, including deep water energy exploration, remote mining and transoceanic shipping and is the world’s market leader in SATCOM networks to the mining industry, and the fastest growing provider to the oil and gas industries.

The expanded agreement, which uses one of Optus’ 16-meter C-band antennas, will enable ITC Global to offer communication services to remote and harsh locations within these industries.

Chris Hill, ITC Global CTO and MD Asia Pacific, said, “The Optus Satellite team and the Lockridge Earth station continue to provide us with the levels of reliability and redundancy we absolutely require to satisfy the needs of our customers.” 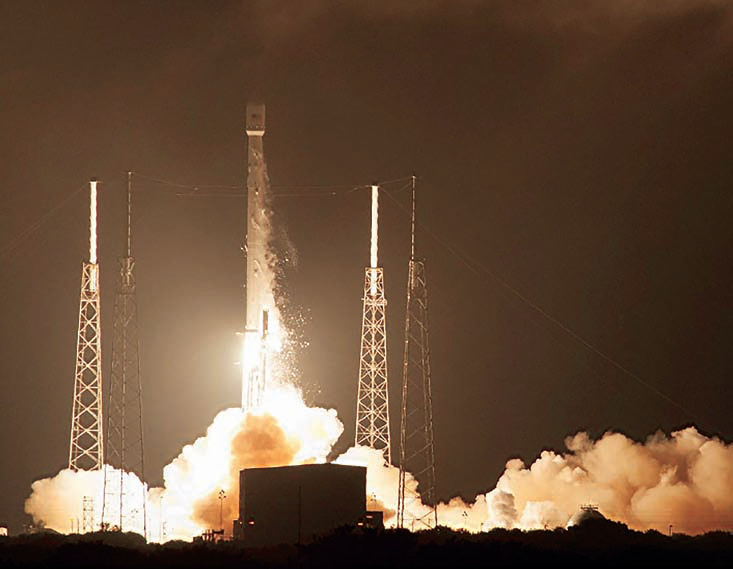 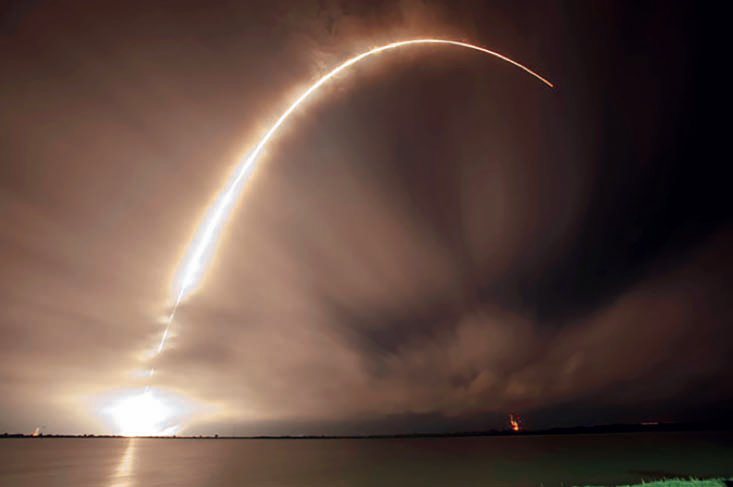 The spacecraft successfully separated from the launch vehicle 32 minutes after liftoff. AsiaSat has acquired the first signals from the satellite in Hong Kong 54 minutes after launch. AsiaSat was moved into the geostationary orbit, some 36,000km above the equator.

AsiaSat 8 is a Space Systems/Loral 1300 series satellite and has a design life of 15 years. With 24 Ku-band transponders and a Ka-band payload, AsiaSat 8 will co-locate with AsiaSat 7, where AsiaSat has established networks for service since 1990. AsiaSat 8’s powerful Ku-band beams cover China, India, the Middle East and South East Asia, with inter-beam switching capability to provide flexibility to address market requirements. 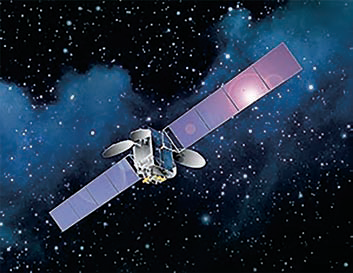 Artistic rendition of the AsiaSat 8 satellite. Image courtesy of MDA.

AsiaSat 8 is designed to provide direct-to-home (DTH) television service, data broadcasting, and telecommunications services in Asia and the Middle East where it will help meet growing market demand and ensure the delivery of exceptionally high power and quality service to its customers.

“This is our first launch with SpaceX, we would like to thank them for their excellent work and effort in making today’s launch a success. In the coming weeks, we will work closely with Space Systems/Loral, our long-term partner, on the post-launch maneuvers and in-orbit testing of AsiaSat 8,” said William Wade, President and Chief Executive Officer of AsiaSat. The addition of AsiaSat 8 to our existing fleet of four in-orbit satellites will expand our fleet capacity and enable us to serve a wider range of customers for advanced satellite services, from DTH, data broadcasting to broadband services.”

Russia + Peru: A Hand Launch From ISS For Chasqui-1 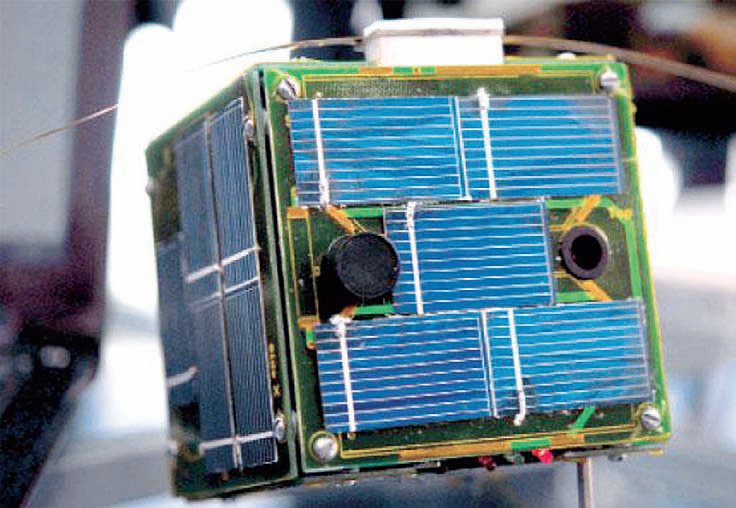 Photo of the Casqui-1 CubeSat.

This time, the ISS crew members’ extravehicular activities are of a scientific nature—Russian cosmonauts Artemyev and Skvortsov assembled the scientific instrumentation for the Expose-R experiment, took a swab from a porthole under the Test experiment, removed panels of the Endurance experiment and the third container of Biorisk one, and photographed the shield vacuum insulation on the surface of the orbital station.

The cosmonauts completed a number of additional technical projects in a spacewalk that lasted 45 minutes. 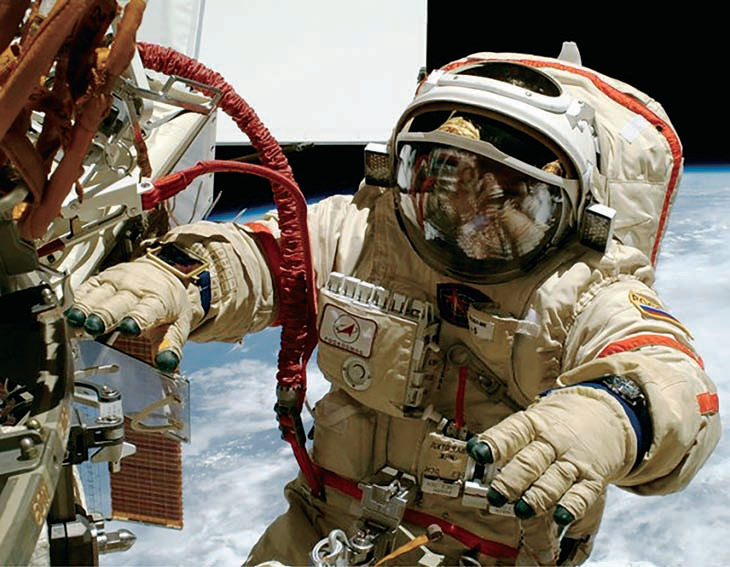 The hand launch of the Chasqui-1 CubeSat by Cosmonaut Artemyev from the ISS. Photo courtesy of NASA.

During the outside excursion, Artemyev launched the Russo-Peruvian Chasqui-1 CubeSat while standing on the ladder leading to and from the Pirs airlock on the ISS. The nanosat weighs in at 2.2 pounds (1kg) and is a 4-inch (10cm) CubeSat.

“Chasqui” means “ messenger” in the language of Peruvian Indians. The spacecraft was developed by the students of the (Russian) city of Kursk and Peru over a period of three years.

Various information has been threaded into the satellite’s memory. The CubeSat includes children’s drawings which, as a message to extraterrestrial civilizations, will be broadcast into open space. 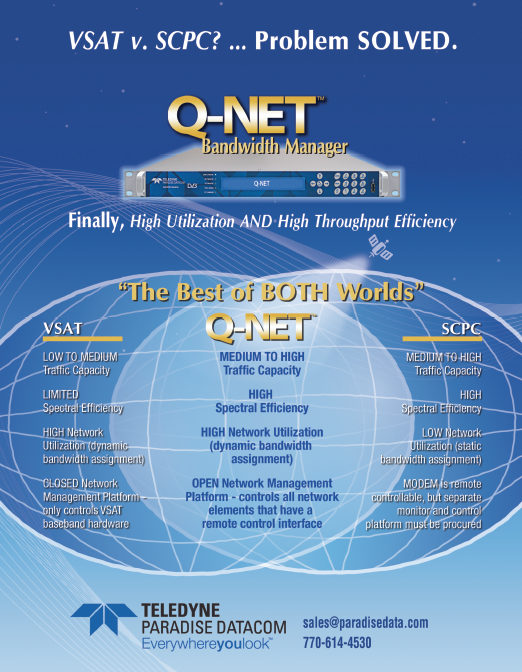 The launch of the satellite was tracked from the ground and a special antenna will be receiving telemetry data fed into the memory of the Chasqui-1.

The satellite will have four monitoring sessions per day for a period of six months. 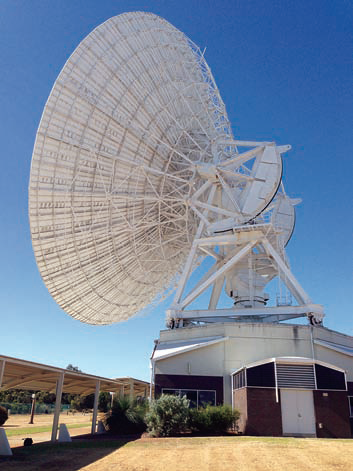 The additional hub supports the company’s ongoing commitment to expand its VSAT Ku-band network when the opportunity arises.

This latest teleport, NSSLGlobal’s seventh, will also help deliver improved connectivity for customers in the Americas, North Atlantic and the Mediterranean. The teleport, which will work in tandem with NSSLGlobal’s Jacksonville teleport, will be integrated into NSSLGlobal’s DVBS2-RCS2 network and operate beams such as the Intelsat T11 USA.

The new site at Southbury will also offer different opportunities to extend the current VSAT network and enhance NSSLGlobal’s Cruise-IP and Broad-IP services.

Sally-Anne Ray, Managing Director, NSSLGlobal commented: “As a company we are steadfastly growing our international presence to provide customers with seamless and continuous connectivity. This year alone, we have opened an office in New Orleans, our teleport in Perth, Australia has gone live and with the addition of the Connecticut teleport, we are truly growing our global reach. The Americas are a strategic area for us and we are committed to providing outstanding service in the region. The new teleport will help us to deliver this and will support our ever-growing customer base.”

The Southbury, Connecticut teleport officially went live on July 1st, and is available to existing and new customers. 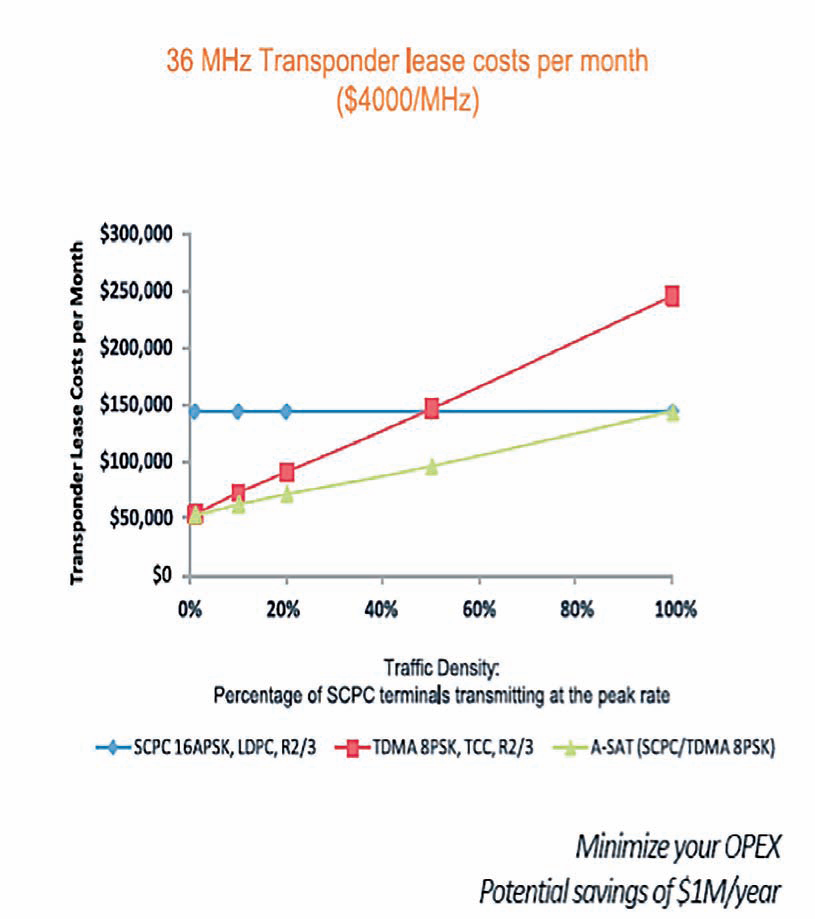 Additionally, by having TDMA and true SCPC technologies in a single platform, the switch between traffic patterns is efficiently supported and all risks of equipment obsolescence are mitigated.

“We just love to innovate, and our A-SAT™ technology is a great example of that. We saw customers struggling to predict how to dimension their system in the face of constantly changing usage, so we solved it for them and optimized the efficiency,” explained Mark Lambert, VP Sales & Marketing, Managing Director EMEA Region at Advantech Wireless.

During this event, Advantech Wireless will show multiple VoIP calls, a classic TDMA application that is suddenly joined by streaming video (notoriously inefficient over TDMA).

Visitors will see the VoIP calls being sustained as the Discovery Hub switches between TDMA and SCPC (and between SCPC and TDMA) satellite access techniques to  deliver maximum efficiency for the new situation.

The Space Foundation’s The Space Report reveals that the global space economy grew to $314.17 billion in commercial revenue and government budgets in 2013, reflecting growth of 4 percent from the 2012 total of $302.22 billion. 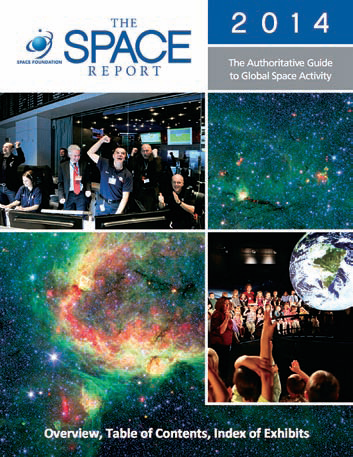 Commercial activity—space products and services and commercial infrastructure—drove much of this increase. From 2008 through 2013, the total has grown by 27 percent.

Government spending decreased by 1.7 percent in 2013, although changes varied significantly from country to country. Substantial space budget cuts in the United States outweighed gains in Canada, India, Russia, South Korea and the United Kingdom, all of which increased budgets by 25 percent or more.

These new global space economic numbers come from the Space Foundation’s publication, The Space Report 2014: The Authoritative Guide to Global Space Activity, which was released today. Data was compiled from original research and a wide variety of public and private sources, and analyzed by Space Foundation researchers.

The 160-page book contains worldwide space facts and figures and is illustrated with photographs, charts and graphs. Within are myriad examples of the benefits of space exploration and utilization, the challenges facing the space sector, the opportunities for future growth and the major factors that shape the industry. In addition, The Space Report includes an overview of each sector, easy-to-understand definitions and up-to-date information on space infrastructure, facilities, launches and programs. Some of the many interesting facts and analyses found in The Space Report 2014: The Authoritative Guide to Global Space Activity: 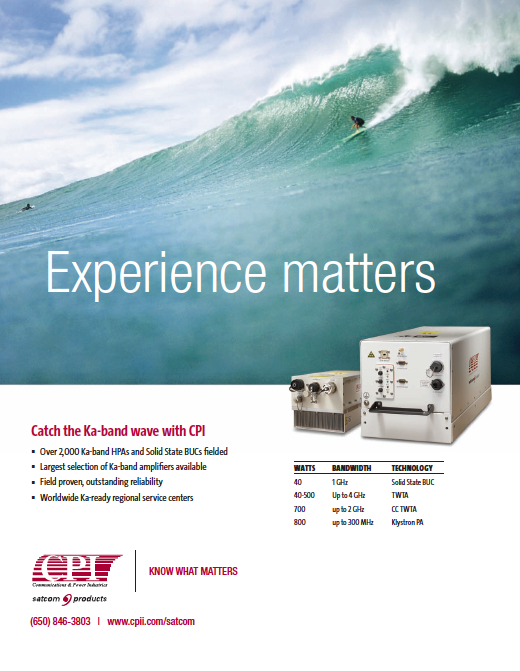 • New launch vehicles made their first flights (or first successful flights) in five countries—the Antares and Minotaur V in the United States, Soyuz 2.1v in Russia, Kuaizhou in China, Epsilon in Japan and KSLV-1 (also called Naro-1) in Korea.

• Many of the microsatellites were short-lived technology demonstrations, but there is a considerable degree of interest in future possibilities for constellations of small satellites that provide valuable services on an ongoing basis.

• According to U.S. Bureau of Labor Statistics (BLS) data, the size of the U.S. space workforce declined for the sixth year in a row, dropping 3.5 percent, from 242,724 in 2011 to 234,173 in 2012 (the most recent full year for which data is available), a decrease of about 8,500 workers. However, the changes varied by sector, with some portions of the space industry growing while others contracted.

• The United States’ National Aeronautics and Space Administration (NASA)’s civil servant workforce remained essentially flat, declining by less than 1 percent to reach 18,068 in FY 2014. Although the workforce continues to become more concentrated at higher ages, NASA has experienced moderate success in recruiting and retaining young workers below the age of 35 during the past five years.

The Space Report is published annually by the Space Foundation, which works with a leading aerospace consulting firm, Futron Corporation, to research and analyze government and industry trends in space activity. 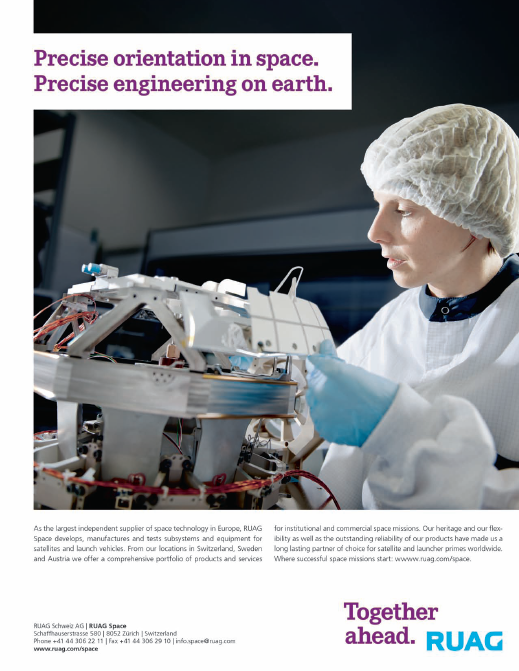