When the wave of New Space and smallsat players came on the scene a few years ago, they brought a new set of priorities to the ground segment with them. After all, you can’t spend a million dollars on a ground station that supports a single, $200,000 satellite.

It wasn’t just about dollars and cents, it was about operating with fewer people, not to mention that the people you have may not be ground systems experts. It was also about smaller footprint systems that could be mobile and software-based and turnkey wherever possible. 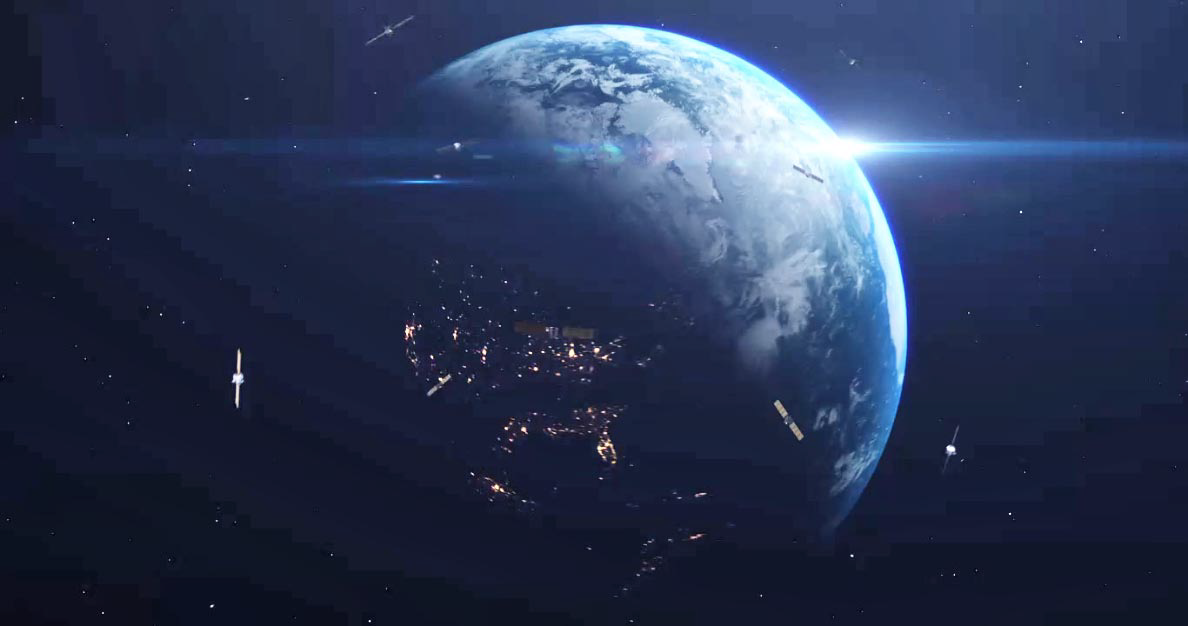 It wasn’t just about dollars and cents, it was about operating with fewer people, not to mention that the people you have may not be ground systems experts. It was also about smaller footprint systems that could be mobile and software-based and turnkey wherever possible.

Fast forward and another wave of innovation hit the industry, cloud-enabled ground services. Companies such as Microsoft and KSAT introduced highly scalable, dynamic ground services to support Earth Observation (EO) and imaging organizations that are applying all manner of remote sensor data to everything from maritime, energy, agriculture and defense. 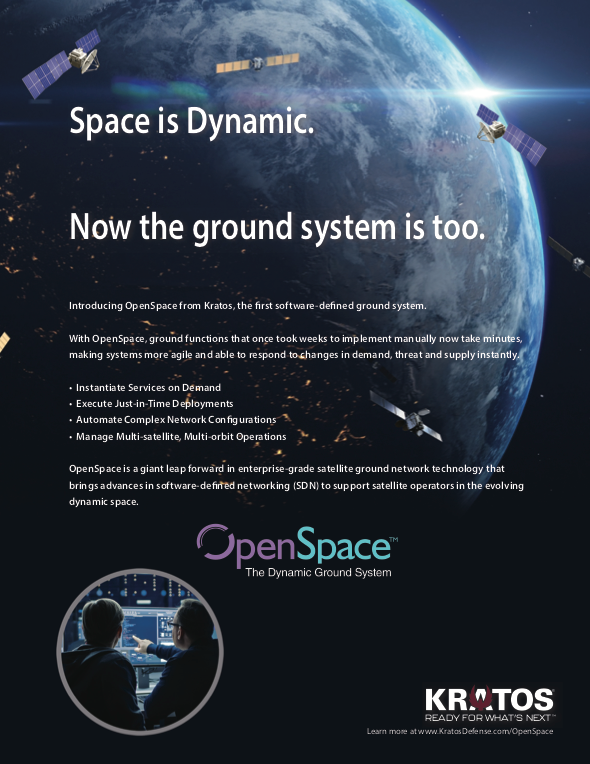 As a small company, why own a ground system at all when you may only need it a few hours a day when your satellite passes over one or two antennas? Much better to subscribe to a Ground Station-as-a-Service (GSaaS) where an experienced cloud operator can offer more antennas, better placement, endless storage and cloud processing, as well as higher levels of security and expert technicians on demand.

For the GSaaS and cloud providers, however, some of the ground trends encountered by the smallsat, EO and LEO pioneers had to go even further— lower operating costs, greater automation and, most importantly, the ability to repurpose ground system components on the fly from one mission to the next, one satellite to the next, again and again and again.

The transformation on the ground that started with smallsat and cloud operators is working today, remaking the old paradigm of purpose-built, hardware-based, often proprietary systems designed for bent pipe, fixed payload content delivery model, to dynamic, automated and intelligent operations that can adapt in real-time to changing conditions and multiple missions, even multiple orbits.

The Rise of Dynamic Ground

A dynamic ground system is one that can support end-to-end service delivery for multiple missions and adapt — on the fly — to changing demand, supply and threat. In fact, it can support multiple missions simultaneously by repurposing ground system resources as needed, ultimately even supporting the ability to roam across multiple satellite networks, one of the high priorities in the defense sector.

In order to support dynamic ground, however, operations must first shift to become digital and virtual. Working directly with analog RF signals in the traditional model just won’t keep up with the speed, flexibility and scaling needs of highly configurable, software-defined payloads capable of servicing thousands of users by changing beams, power, capacity and frequency. Or, consider the mega-constellations aiming to launch multi-band platforms comprised of thousands of high-throughput satellites in LEO and MEO orbits.

The paradigm for today’s ground segment has remained largely unchanged for decades. Defined by purpose built, manually configured, proprietary hardware, these systems are unable to adapt and scale dynamically in tandem with changes in orbit, satellite or payload,– nor can they interconnect and integrate well with more modern terrestrial communications networks on the ground that have largely moved to a Software-Defined Networking (SDN) architecture in order to achieve the very same adaptability, mobility and roaming goals now being sought in the satellite world. While the focus today is on 5G, the telecom industry is only able to achieve 5G because it started down a network architecture revolution during the move from 2G to 3G that drove the adoption of standards and interoperability. (See Figure 2, below.) 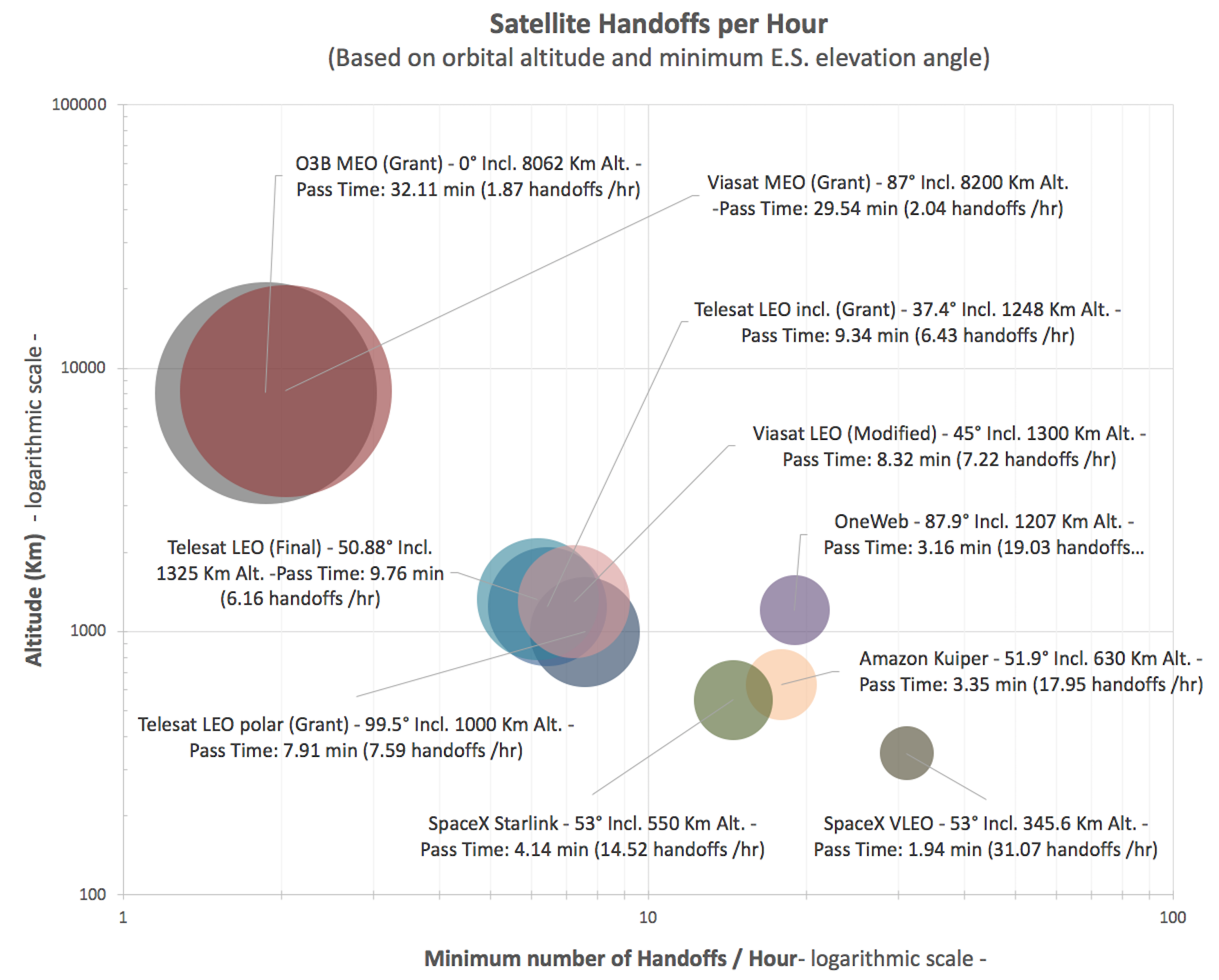 Within that analogy, it’s safe to say that most of today’s satellite ground systems are still living in what is much like a 2G architecture that is stovepiped with vendor specific hardware and software. Without a transition to modern, dynamic platforms, legacy ground systems will become a bottleneck between reconfigurable, software-defined systems in space at one end, and 5G terrestrial networks at the other.

Virtualization — the conversion of hardware components such as modems or combiners into software functions — is the first step toward dynamic ground operations as it aims to move ground system signal processing and management operations into a digital environment such as the cloud.

The space industry has lagged a bit in adopting virtualization due to the physics involved making virtualizing RF equipment far more challenging than virtualizing IP-based network components. However, dramatic progress has been made on this front in recent years. One instance is the introduction of Kratos’ quantum® line of software-based, satellite front-end processors, modems and recorders that are being used today in ground systems around the globe that support tens of thousands of satellite passes.

While virtualization delivers many advantages, on its own it is a standalone component-focused approach. SDN goes far beyond virtualization by employing techniques such as service orchestration, resource orchestration and service chaining to design, deploy and manage ground systems across both modern virtual components and elements which remain hardware, such as antennas and digitizers.

In an SDN world, Virtual Network Functions (VNFs) replace proprietary hardware solutions with software running on off-the-shelf server hardware or in the cloud. Sequences of VNFs can be service chained together intelligently and automatically to respond to changing needs or conditions.

In addition, industry standard orchestration frameworks enable customer service requests along with necessary service and resource requirements to automatically flow to the ground system, which then automatically spins service chains up and down hundreds of times a day to support different payloads, satellites and orbits.

EO and GSaaS providers are growing globally, in part by taking advantage of virtualization to speed service provisioning and leverage other cost and performance benefits. For example, provisioning a service in today’s hardware-based world can take weeks to ship equipment, cable and configure many proprietary hardware elements to connect customers. With virtual components that process is cut to days because physical components no longer have to be shipped to a limited number of antenna sites and configuration is simpler. 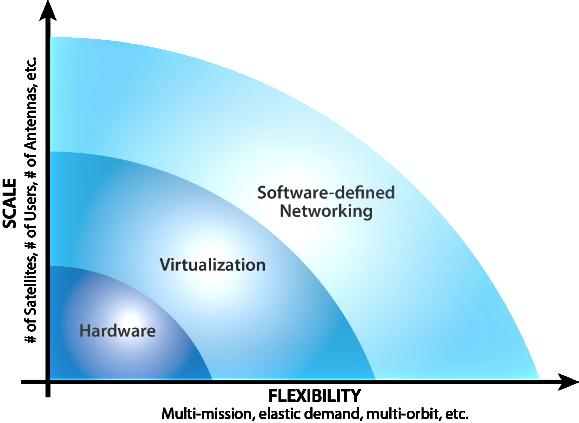 By taking the next step and applying SDN techniques to employ dynamic capabilities, that time can be cut to just hours or even minutes, where VNFs are service chained together and orchestrated automatically as an end-to-end service. It also means infrastructure is optimized for full use and value, rather than sitting idle in between satellite passes.

For EO and sensing missions, in example, operators can quickly downlink their data, immediately process and analyze it with applications they are already running in the cloud. Customers can downlink data when and where they need it and rapidly gain insights to make decisions faster.

These are just a few of the many compelling benefits in shifting from legacy architectures to a more automated, intelligent and scalable digital infrastructure used today by forward-thinking providers. The benefits, such as cost savings, flexibility, scalability and resiliency, to tactical advantages that reach into every corner of the ground system, dramatically optimize operations.

Migrating to dynamic ground systems allows ground operations to synchronize with the increasing complexity coming to satellites in orbit and hand off to the terrestrial telecommunications and data networks. Rather than operating like a traditional RF analog platform, a digitized ground station can operate more like today’s modern IP networks, seamlessly interconnecting with telecom, wireless, and expanding 5G networks and IoT.

Greg Quiggle serves as the Vice President Product Management of Kratos where he oversees product strategy and ongoing lifecycle management of Kratos’ commercial product portfolio. He has spent more than 25 years conceptualizing and executing successful product and technology strategies for companies in the communications industry.

OpenSpace: The Way Forward for Standards Based, Dynamic Ground

OpenSpace from Kratos is the industry’s first and only fully virtualized, software-defined and orchestrated satellite ground platform and family of virtual products. Based on open industry standards, OpenSpace supports end-to-end service delivery, bringing together the data, control and management dimensions of the ground segment to deliver intelligent operations that support multiple missions and SLAs. The OpenSpace platform architecture unifies four key operating domains: 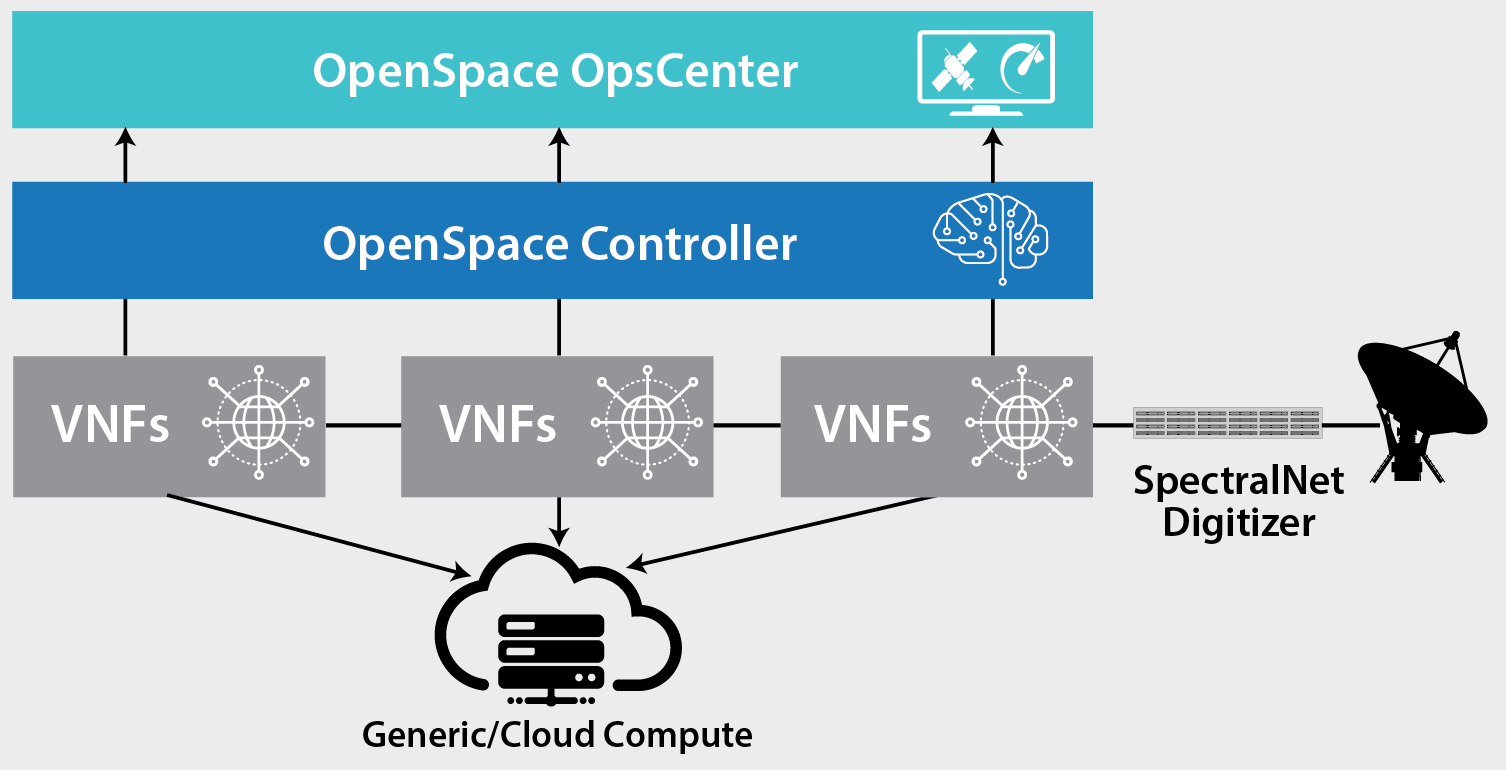 • OpenSpace VNFs are software applications that replace dedicated satellite hardware technology, such as modems, channelizers and combiners. They are containerized for flexible deployment in a variety of common, off-the-shelf compute environments or in the cloud.
• The OpenSpace Controller directs how VNFs are chained together to provide a given service or mission against a defined SLA or ConOps.
• OpenSpace OpsCenter is a unified manager which administers the service chain life cycle and bridges management functions across legacy analog components.
• SpectralNet OpenSpace Digitizer reliably converts RF signals into a digital IF format, enabling digitization and transport of RF signals across wide area IP networks without degradation. When used in tandem with OpenSpace VNFs, RF signals are reliably digitized, transported and processed at their final destination even over impaired IP network links.