High Throughput Satellites (HTS) are currently an extremely hot topic within the satellite industry. These are Ka-band satellites and are optimized for data applications, using such techniques as multiple spot beams with extensive frequency reuse, which means they achieve significantly greater capacity than that of conventional Ku- or C-band satellites optimized for broadcast applications such as TV. 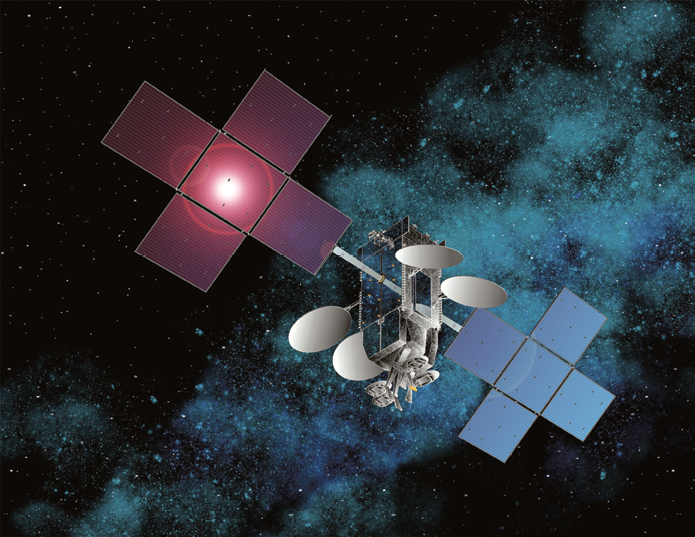 An artistic rendition of the EchoStar XVII satellite with Hughes’ JUPITER™ high-throughput technology.

For example, the EchoStar XVII satellite with JUPITER™ high-throughput technology covers North America with 60 spot beams and has well in excess of 100Gbps of capacity, enough to deliver high-speed Internet service to an estimated 1.5 to 2 million HughesNet subscribers.

Indeed, HTS investment in North America has been justified because of the huge consumer demand for high-speed Internet access, now with well over 1 million subscribers enjoying high-speed Internet access via satellite from the two providers, Hughes and ViaSat. And they have both announced plans to launch next generation HTS satellites in 2016, bringing total capacity over North America to well over 400Gbps. However, not every region in the world has the addressable market to justify the kind of significant satellite broadband investment that we see in North America.

All of this means it is unlikely the region will see 100Gbps HTS systems deployed in the foreseeable future. Instead, it is more likely that satellite operators will implement HTS designs which more closely meet the market reality. 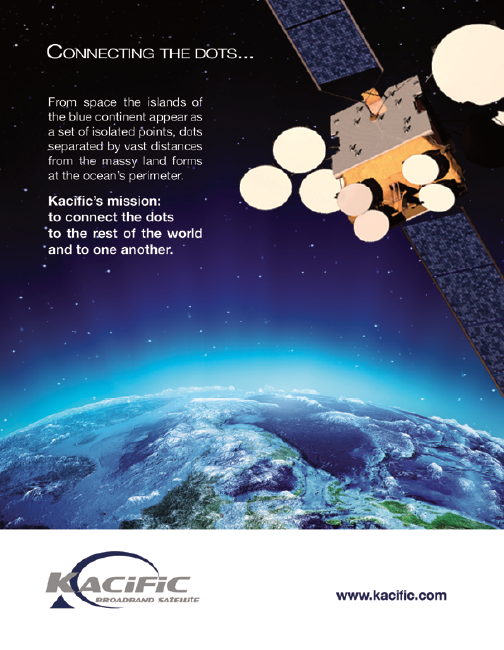 Hosted Payloads Or Smaller Satellites
Just because the industry can make 100+ Gbps satellites does not mean that every operator should be planning to deploy such large capacity. Of the more than 50 active HTS communication projects (either on orbit or planned), the majority of these systems are employing a partial payload for the HTS application (which can be either Ka- or Ku-band). With this approach, satellite operators are able to incrementally add HTS capacity onto a satellite whose primary mission may be the traditional 36/54 MHz Ku- and C-band coverage optimized for broadcast.

Assuming that these spot beams are 500MHz each, this satellite will enable 9GHz of capacity for the Ka-band data services alone. A partial payload, or even a dedicated Ka-band payload but with a smaller satellite mass (and thus lower capacity), may be attractive to service providers for a variety of reasons, including:

• Small geographic coverage area—perhaps the target market is one country of modest size
• Anticipated slow fill rate—the take-up in developing parts of the world may be slower than North America or Europe, thereby reducing the need for immediate deployment of a lot of capacity. In these areas, it makes more sense to optimize for coverage rather than capacity
• Lower capex—the cost to implement a partial payload on a satellite will be significantly less than the cost to launch a dedicated satellite

For these reasons and more, it is not necessarily true that “bigger is better.” In fact, “bigger is better” only when the fill rate or usage of the capacity is certain to be quickly consumed. Where market demand may be uncertain, a smaller capacity can enable an operator to ease into a market with a lower investment.

Dedicated Or Open Systems
There are a number of different business models in practice for the new generation of high-throughput satellites. The largest, such as EchoStar XVII with JUPITER high-throughput technology, provides well over 100Gbps of capacity over North America and operates as a dedicated system.

As illustrated in Figure 1, a dedicated system is one where a single entity operates the satellite, procures the ground system, and offers the services directly and/or through one or more retail partners to end-users. In this so-called “Mbps model” construct, the operator is maximizing its return on investment by ultimately selling Mbps through a variety of service plans and there is limited possibility for an independent service provider to purchase satellite bandwidth alone for the purpose of offering its own services.

In contrast, as illustrated in Figure 2 on the next page, an open high-throughput satellite system is one where the satellite operator sells bandwidth capacity to individual operators (so-called “MHz model”) who take on the responsibility to procure the ground systems, develop the BSS, and then sell Mbps service plans through their distribution channels or directly to end-users. This type of model is potentially attractive to a satellite operator, as it reduces the risk associated with a service business and lets the satellite operator focus on its core competency of managing spacecraft.

Hughes believes that most satellite operators will prefer a “MHz” model whereby they focus on spacecraft operations and simply sell the MHz to a ground operator who provides the Mbps services to the end-users.

Next Generation Ground Systems
Current generation VSAT systems, designed and optimized for use on traditional FSS satellite capacity, have evolved over the past 20 years to incorporate many advanced features, including DVB-S2 with ACM (adaptive coding and modulation); not surprisingly, these systems could be operated over HTS satellite capacity. But high-throughput systems differ from traditional satellites in several key areas, including:

• High capacity beams of 100MHz or more
• Gateway stations supporting as many as 10 to 20 spot beams and Gbps of capacity
• High throughputs per remote station
• Sophisticated techniques to overcome rain attenuation, especially as required in Ka-band systems

Thus, the system requirements for VSATs have evolved quite significantly with the emergence of HTS satellites. As a case in point, Hughes has developed an extensive set of new technologies dubbed “JUPITER High-Throughput Technology,” which enable high bandwidth efficiencies on the space segment and Gateway stations, as well as high-performance, cost-effective terminals for the end-user.

Advances In Waveforms
Due to its excellent performance, the DVB-S2 standard with adaptive coding and modulation (ACM) has been widely adapted in virtually every major VSAT system on the market. However, the DVB-S2 standard was conceived for traditional satellites employing coverage-optimized 36MHz or 54MHz transponders, typically yielding maximum symbol rates of 45Msps with 16 APSK modulation.

The new class of HTS satellites, with a greater amount of spectrum per beam and with higher link capabilities, can achieve higher capacity by employing enhancements or extensions to the DVB-S2 standard. Hughes JUPITER technology applies a number of extensions to the DVB-S2 standard including support for higher symbol rates, as well as support for higher modulation schemes such as 32 APSK.

Advanced Gateway Architecture
Another striking evolution of VSAT requirements is the capacity required at the hub or Gateway station. This is closely related to the amount of channel capacity noted above, but manifests itself in hardware. A classic 36MHz transponder, when supporting VSAT applications, will require a hub station that supports 80 to 100Mbps of capacity. Most VSAT systems deploy this in a one or one-half rack solution. But a high-throughput satellite system with high bandwidth spot beam channels and multiple spot beams will result in Gateway stations that support from 1 to 10Gbps of capacity.

Consider the implementation for a 5Gbps Gateway. Using a conventional VSAT practice where a one-half rack typically supports 100Mbps throughput, as many as 25 racks of equipment would be required, plus additional devices for packet shaping, routers, switches, and other equipment required to support the traffic requirements. 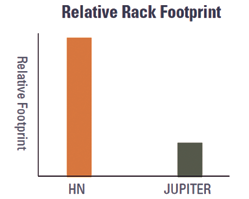 Figure 3 illustrates the relative rack footprint of the Hughes JUPITER technology versus the Hughes HN System, a system designed and optimized for FSS satellite applications.

High Performance Remote Terminals
The number of devices per household and per business is growing dramatically. More devices, along with the increased consumption of video, means that the remote terminal needs to support ever increasing throughputs. Hughes is using JUPITER technology to bring to market a family of remote terminals that have significant throughput and processing capabilities. These JUPITER system terminals have the capability to support many Mbps of IP throughput. With a focus on even more bandwidth-demanding enterprise and government applications, in the future, Hughes will be introducing specialized terminals with the capability to support up to 100Mbps of IP throughput.

In addition to performance, reliability is also a key objective for the newer generation of high performance remote terminals. Pictured here is the Hughes JUPITER technology Ka-band outdoor unit, which integrates the BUC, LNB, and TRIA in a single small package, thereby increasing reliability.

Not Only Internet Access
Obviously, Internet access is a key driver for HTS systems. However, particularly in the APAC region, there will be other applications which will drive usage of HTS systems. 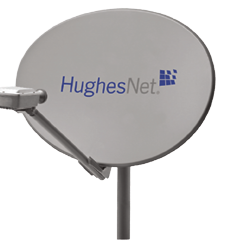 Internet For Schools
Numerous countries around the world are investing in infrastructure to bring high-speed Internet to schools everywhere, even in the smallest communities and villages. Satellite is an ideal solution in areas unserved or underserved by terrestrial technologies such as DSL or cable. At a typical school, a large number of devices will be connected and active at any one time, thus driving the consumption of large amounts of capacity. High-throughput satellites can deliver exceptional economics for Internet access to serve education needs throughout the world.

Cellular Backhaul
3G and 4G cellular technologies enable high channel rates which, in turn, require higher bandwidth backhaul channels to support the traffic. While 3G and new 4G/LTE technologies are being rolled out for higher speed mobile data services, most of these services are being implemented in urban areas and major traffic arteries where terrestrial backhaul is available or justifiable, usually fiber or microwave. Providing coverage in ex-urban and rural areas is an emerging opportunity for satellite backhaul, as it can often be justified when distances to cellular base stations make it cost-prohibitive using terrestrial means. 4G services will be limited to urban centers, where fiber is readily available, for the foreseeable future. But mobile operators will continue to extend 3G services to ever more remote areas, thus creating an opportunity for high-throughput satellite systems to support the backhaul of 3G data services.

Enterprise High-Availability Networking
One of the strongest value drivers for satellite networks in enterprises is backup of terrestrial services. Combining terrestrial and satellite connectivity means there are two alternate network paths, ensuring the highest availability even when disaster strikes. In addition, the satellite path can be used to instantaneously deliver bandwidth where and when it is needed, which is especially important when backing up relatively low bandwidth DSL access line.

Conclusion
High-throughput satellite systems represent the next generation of VSAT networking, enabling better economics and higher performance broadband service levels across the globe. The APAC region stands to gain tremendously from these systems as broadband services will become more universal and at lower cost. The challenge will be for satellite operators and ground system operators in the region to work together closely to leverage these capabilities into a range of new and cost-effective services.

For more information, please visit the Hughes infosite at http://www.hughes.com/

About the author
Mr. Rehbehn has more than 25 years experience in the satellite arena including business development for the Hughes set-top box product family, as well as the Hughes consumer Internet service business.  Prior to his current role in the International Division, Mr. Rehbehn was responsible for enterprise sales for the southeast region of the United States and worked closely with many of the US-based Fortune 1000 companies to develop network solutions tailored to their needs.  Prior to his marketing and business development responsibilities, he supported the engineering development of wideband time division multiple access (TDMA), packet networks, and TDMA very small aperture terminal (VSAT) satellite network projects at HNS.

Editor’s note
Our thanks to the Asia Pacific Satellite Communications Council (APSCC) for allowing SatMagazine to republish Mr. Rehbehn’s article, which previously appeared in the APSCC’s Q3 2013 Newsletter. For further information regarding APSCC, please visit http://www.apscc.or.kr/ 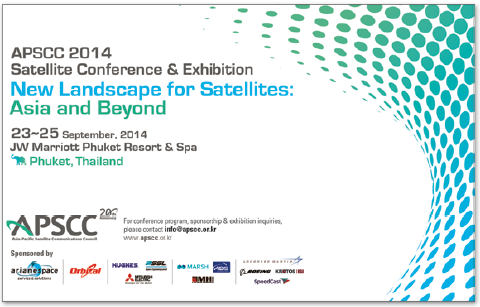