Has the 3DTV wave crested? From what I saw at the IBC show and at SATCON 2012, I’d say so. NOBODY was talking about 3DTV. The buzz was about the far more lifelike images produced by the 4K (twice the number of pixels as today’s HDTV) technology on display. The same display manufacturers who overhyped 3D are marketing 4K displays under the “Ultra HD” moniker. The difference, though, is that this really is worthwhile. Absolutely stunning images that won’t have you stumbling into your furniture wearing those goofy 3D glasses. And some really HUGE displays! What could be bigger than that?

Actually, something more potentially game-changing to the Television World Order.

Is the Next Big Thing something Smaller and more mobile than what has come before? 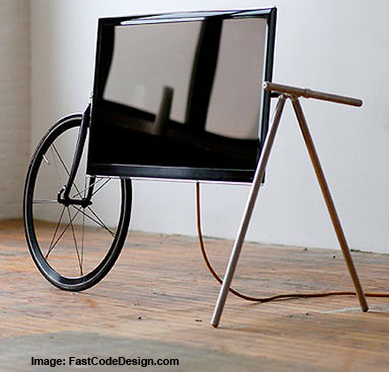 The answer is the highly disruptive change taking place in the television business due to the computer and mobile viewing behaviors of consumers. “Tablet Television” on mobile phones and, most especially, the iPad and Android tablets, is increasingly the norm for anyone under 30. Those of us who are slightly older might prefer slumping on the couch in front of our mega-TV’s, but how many of us do so with an iPad on our lap instead of a bucket of popcorn? <Sigh> But I do miss that popcorn…

The “sweet spot” for Tablet TV is, of course, mobility. Whether the tablet is used by a teenager wandering around the house, a working stiff sneaking in a missed TV episode during their commutes, or Dad watching a major league game instead of little Johnny’s tee ball game, people love to watch TV on the go. And it is all going to get better (or worse, depending on your viewpoint).

TV manufacturers aren’t in love with this idea, and linear TV programmers aren’t quite sure how to best monetize these trends... just yet. Mobility does create its own unique technology and commercial challenges. We need infinitely more bandwidth in what are already crowded terrestrial mobile frequencies. Some of the bandwidth challenges are overcome by new compression and transmission techniques. But what isn’t going away is the continued encroachment to the commercial satellite frequency bands.

The more interesting challenges, however, are in the commercial disruption that non-linear and Over-The-Top (OTT), (which typically bypasses the traditional last-mile service provider as the delivery and billing “partner”) pose to the profitable and successful linear television distribution businesses of Cable Television and DTH satellite services. This, too, is all going to get better (or worse, again depending on your viewpoint).

Telcos and Content Delivery Networks (CDNs) are salivating to get into this business, Cable MSO’s and DTH operators want to keep them out, and programmers want to serve everybody, everywhere, but don’t want to go broke doing it. All of this is uncharted territory; existing programmers such as Home Box Office offer streaming and on-demand OTT as a value-added benefit to existing subscribers through existing service providers at low or no cost.

Other broadcasters and programmers license content to platforms such as Hulu. DISH Network, the DTH operator, acquired Blockbuster to create an outlet and network for terrestrial streaming delivery. Netflix went from a mail-delivered movie model to an on-demand live streaming model... and screwed up their business by splitting those services apart... and then decided, instead of continuing to buy CDN services from the Limelights and Level 3s of the world, to become a CDN of their own. They also took a page out of the HBO playbook and, instead of just licensing content, now create some of their own programming.

Where does this all lead? To quote the great poet, philosopher and technology savant of our times, Jimmy Buffett, “Where it all ends, I can’t fathom my friends….” However, I’d be more than interested in your viewpoints. I’ll be at the guy at the end of the bar, the one with a Margarita and a Cheeseburger in what passes for Paradise these days…

About the author
Mike Antonovich is a frequent contributor to SatMagazine, drawing on his more than 30 years in the television, satellite and fiber-based video service industry for market leading companies like ESPN, Group W Satellite, PanAmSat, Genesis Networks and Global Crossing. He is presently Vice President, Sales and Marketing of Roberts Communications Network (RCN), the leading provider of video and wagering transmission services to the racing and pari-mutuel industries. RCN is also one of the world largest providers of live and on-demand video streaming services, producing more than 40,000 hours of live video streams annually. Roberts also operates an 80-channel satellite DTH service, owns the world’s largest transportable uplink fleet and leases more than 400 MHz across more than a dozen satellite transponders. 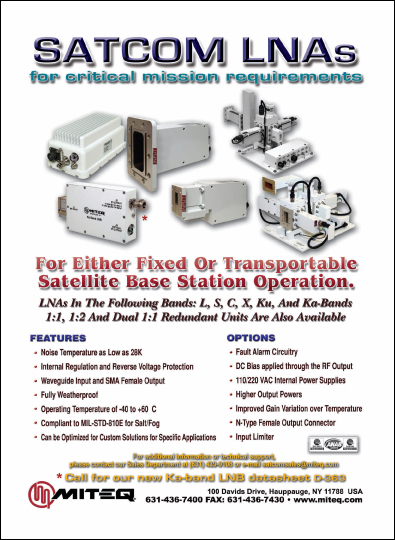