In 1993, Walter Kistler and Bob Citron founded Kistler Aerospace for the purpose of developing a fully reusable launch vehicle capable of achieving an Earth orbit at a minimal price point. 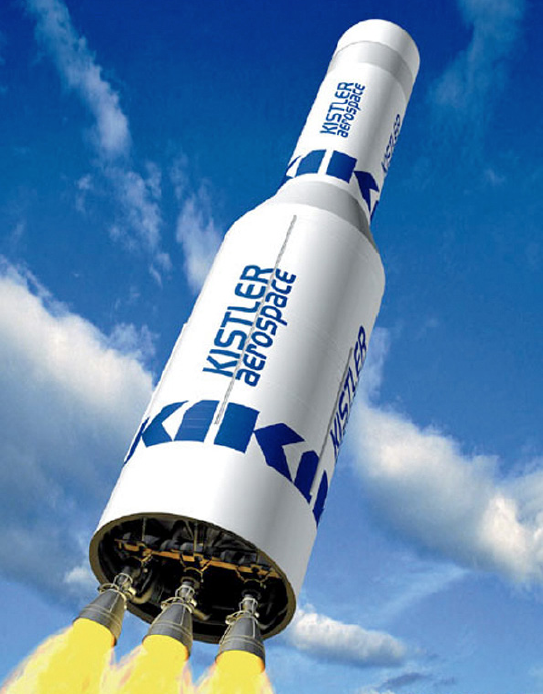 Walter P. Kistler, born 1918 in Switzerland, had studied the sciences at the University of Geneva and earned a Master’s degree in physics from the Swiss Federal Institute of Technology in Zurich. He migrated to the United States in 1951 and started working at Bell Aerosystems, where his first encounter with the space industry occurred through his work designing and building instruments for the Agena upper stage.

Soon thereafter, Kistler established the first of a number of companies that bore his name and he also became involved in SPACEHAB Inc., the company that built four re-usable modules that flew aboard the 18 missions of the Space Shuttle between 1993 and 2007.

It was during this time period when Kistler met Bob Citron, who was born in 1932 and educated at the University of California and Northrop University. Citron had been involved in a number of companies before he turned his attention to SPACEHAB Inc.

Located in Kirkland, Washington, USA, Kistler and Citron designed a two stage launch vehicle that, provided funding could be obtained, would have been capable of placing a 900kg payload in low orbit. They intended to provide regular and inexpensive services by ensuring the launch vehicle would be fully re-usable, resulting in dramatically economical rocket.

The proposed K-1 launch vehicle was to have two stages. The first stage, called the Launch Assist Platform (LAP), was to be 18.30m long and have a diameter of 6.70m, driven by two Aerojet AJ26-58 and one Aerojet AJ26-59 liquid fueled engines. These were, in fact, refurbished and upgraded Russian NK-33 engines, which had been developed for the N-1 launch vehicle—Kistler had purchased 58 of them through Aerojet.

At 130 seconds after launch, the LAP stage would separate and then follow a ballistic trajectory. Two drogue parachutes and two clusters of three main parachutes would decelerate the LAP for a landing close to the launch site, using four low pressure airbags.

The second stage, called Orbital Vehicle (OV), was driven by a single Aerojet AJ26-60, which would place the payload into orbit. The AJ26-60 was based on the Russian NK-43 engine and Kistler had purchased 18 of them, again through Aerojet. The OV was to be 18.60m long and had a diameter of 4.30m. 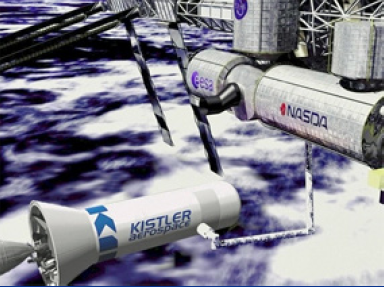 Rocketplane Kistler approaches the ISS in this artistic depiction of the COTS application.

After payload separation, the second stage engine was to perform a de-orbit burn, moving the OV for atmospheric re-entry. At a speed of Mach 2.5, a high altitude stabilization chute would be deployed, followed by a single drogue parachute. Using three main parachutes, the OV would eventually land, using four, low pressure airbags. Recovery was expected to take place between 11 and 24 hours after the launch.

A period of nine days between launch vehicle re-use was planned. With a fleet of three such vehicles, Kistler hoped to be able to launch a satellite every three days.

Launch sites at Pahute Mesa in Nevada and Woomera in Australia were considered. From a logistics point of view, the Nevada site might have had the initial advantage. However, it was the flat, downrange area of Woomera that worked to that site’s advantage.

Preliminary design was completed by the end of 1995 with the hiring of key staff members, raising capital from private investors, and discussions with potential sub-contractors and customers, as well as an assessment of the global satellite launch market. From this analysis, a strategic plan for the K-1’s entry into the global satellite launch business was created. The company specifically targeted the launch of Iridium class communications satellites into a medium altitude orbit.

Between 1996 and 1999, the company completed the K-1 design and established ground facilities. It purchased, through Aerojet, a quantity of Russian engines and negotiated and obtained a launch site within the state of Nevada and ‘ground had been broken’ for a launch site in Woomera. Also, Space Systems/Loral awarded a contract for 10 launches with a value in excess of $100 million.

Routine K-1 fleet orbital operations, delivering customer payloads to low Earth orbit, was originally planned to start in 1999 with full operational status by 2002. The company also envisaged future developments, including a K-2 vehicle that would be capable of placing 2,700kg into low-orbit and a K-3 vehicle with a capability of 9,000kg.

The company managed to acquire $440 million from investors and development was soon underway. However, the expected boom that was to have fueled the development of these satellites did not come to fruition. Kistler had to file for bankruptcy in 2005. 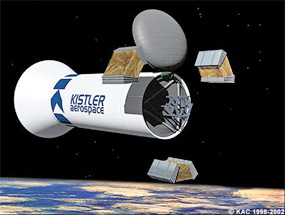 Rocketplane was formed in 2001 to develop, built and operate vehicles for the sub-orbital space tourism market. The company’s Rocketplane XP was a proposed, four-seat, modified Lear executive jet fitted with a rocket engine that would allow it to be propelled to an altitude of 100km, where it would provide four minutes of weightlessness. The two jet engines were retained in the design to accommodate conventional flight. This vehicle was expected to make its first passenger flight in 2007, using the Oklahoma Spaceport in Burns Flat, Oklahoma.

In August 2006, Rocketplane Kistler was selected as one of the companies in NASA’s Commercial Orbital Transportation Services (COTS) to develop a crew and cargo spacecraft to supply the International Space Station. For this project, the Kistler OV stage would be fitted with an ISS Cargo Module that would incorporate a docking collar and a pressurized cargo cabin. It would have a capacity of 3,200kg of cargo for the ISS and would have been able to reboost the ISS as much as 40km using the Orbital Maneuvering System of the OV. Launch on demand in as few as three days was offered.

Long term, it was envisioned that the cargo module could be modified to accommodate a crew. Rocketplane Kistler planned to have the first of three demonstration flights in 2008, all conducted from Woomera.

By August of 2007, the company had not obtained the necessary financing—it was forced to cut its workforce. On September 7, 2007, NASA informed the company that its COTS contract would be terminated in the following month, due to the continued inability of Rocketplane Kistler to meet its financial milestones. More employees were laid off in February 2009 and later that year, the company closed its Oklahoma City headquarters.

On June 15, 2010, Rocketplane Inc., the parent company, as well as the subsidiaries, filed for chapter 7 bankruptcy. Rocketplane Kistler listed $108,250 in assets, including hardware and tooling for the K-1 rocket, as well as many unvalued patents and trademarks pertaining to the rocket. The company had liabilities of $7.2 million.

On November 11, 2011, the assets of the company were auctioned off—these included all capital equipment and patents related to the company, and included physical assets that were located in seven facilities across the country.

As far as Walter Kistler and Bob Citron are concerned, they established their Lunar Transportation Systems (LTS) company on January, 28, 2005, after NASA announced plans to return humans to the Moon and to build a lunar base. LTS proposed a new Earth-Moon transportation system using modularity and flexibility, leading to reduced development cost, a faster development schedule, and better evolvability.

LTS was a privately financed company that required cooperation from NASA in order to raise the private capital required to design, build, ground test, flight test, and operate its Earth-Moon transportation system. The concept was still ‘alive’ in 2011 but, currently, the LTS website is closed.

Walter is now 95 and remains a leading philanthropist. Bob passed away in January of 2012.

About the author
Jos Heyman is the Managing Director of Tiros Space Information, a Western Australian consultancy specializing in the dissemination of information on the scientific exploration and commercial application of space for use by educational as well as commercial organizations. An accountant by profession, Jos is the editor of the TSI News Bulletin and is also a regular contributor to the British Interplanetary Society’s Spaceflight journal. Jos is also a Senior Contributor for SatMagazine.