The concept of small satellites [those classified as below 500 kg] is not new—such designs have been used to test new technologies, support science initiatives and as starting points for the development of more extensive missions. 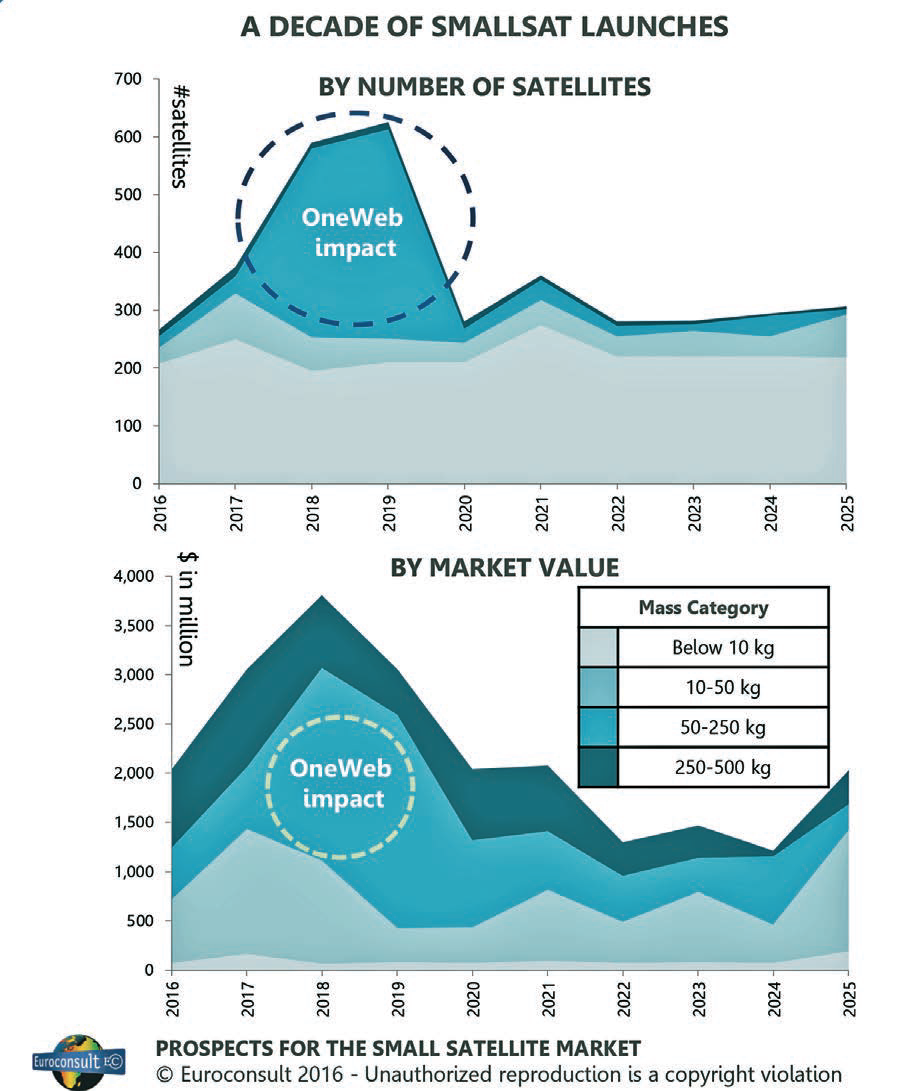 There is no doubt that the current, significant expansion in the number of smallsats being launched is expected to continue into the next decade.

From 2006 to 2015, a total of 780 smallsats were launched; nearly 500 of these were launched in the last three years alone. This is due to a combination of several factors: More launches of smallsat government missions and an increase in launches from university programs.

However, the main factor was the impact of the commercial sector, Planet Labs (<10 kg) launches in particular. This generated a market value from 2006 to 2015 of $12.5 billion (manufacture and launch).

Explosion In Smallsats Expected
These figures are expected to expand significantly. Over the next 10 years, more than 3,600 smallsats are expected to be launched—that’s an average of about 360 units a year. More than two-thirds of these satellites will form part of a wider constellation. This figure excludes the potential 4,000+ units from the SpaceX constellation, STEAM.

This is a four-fold increase from the previous decade. The key factor for the expansion of the number of smallsats is the number of constellation ideas being presented to support global connectivity (in SATCOM) or high-frequency change detection (in Earth Observation), aided by the advancement of satellite system miniaturization permitted by new technologies and/or advances in related sectors, particularly in computational technology.

Outside of EO and SATCOM, numerous university projects will spur further growth along with continued government development to support specific science missions or to support further technology development. The total market value resulting from these over the next 10 years is $22 billion (manufacture and launch), a 76 percent increase over 2006 to 2015 ($12.5 billion).

Although this indicates significant growth, it does not reflect the four-fold plus increase in the number of satellites due to the higher number of CubeSat Earth observation constellations launched. It is important to note that not all of this “market value” is received by prime manufactures; a portion of lower-mass satellites are being built in-house. 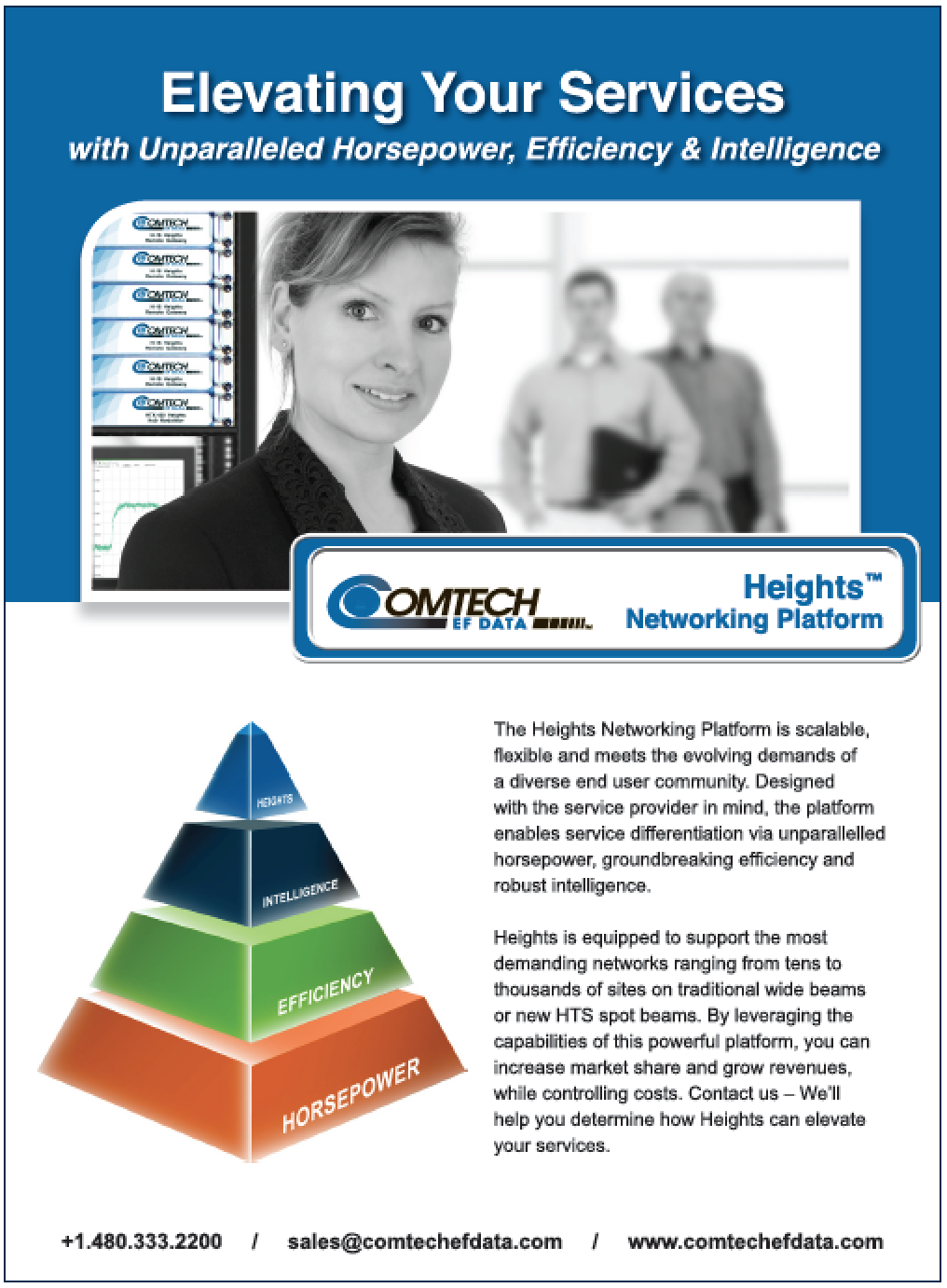 Despite the vast increase in the number of smallsats launched between the decades, the breakdown in percentage by mass remains roughly similar, the main difference being in the 250 to 500 kg category, which is not expected to demonstrate a similar expansion as other ranges. In short, the launch of constellations with <250 kg units is the main driver, whereas
250 kg+ satellites tend to be one-off missions.

The former is also mainly in the realm of commercial enterprise launching capacity, while relatively heavier missions tend to focus on government initiatives. The changing shift in smallsat ownership is quite abrupt between the decades.

From 2006 to 2015, 65 percent of launches were from government organizations (civil and defense, including universities); the future decade is somewhat different with over 80 percent of the satellites expected to be launched from commercial entities.

The number of commercial units to be launched does not translate into the same proportion of market value. Commercial entities may develop and launch 80 percent or more of the smallsats between 2016 and 2025, but they account for only 42 percent of the future market value ($9.3 billion).

The reasoning is relatively simple: Commercial constellations use smaller, lower-cost systems to build solutions, with cheaper solutions predominantly sought. This is reflected in the average commercial unit cost of $3.1 million in the coming decade.

Shifting Application Focus
The application of smallsat technology is also going through a notable shift. In the last decade, the most predominant application area has been “technology,” an application loosely defined as a satellite designed to test future technologies and payloads; thus, there is applicability across other application areas. 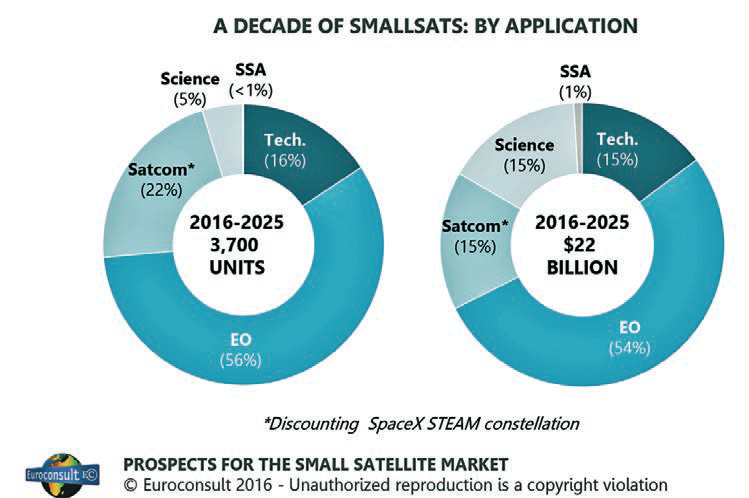 In the future, smallsats will continue to be used to support technology development. However, as an application, that direction will be overtaken by the growth in EO and SATCOM units.

EO is expected to exhibit the strongest growth in terms of units launched—more than 2,000 satellites are set to be launched between 2016 and 2025. Four companies plan to launch more than 1,400 satellites during this period alone: Planet Labs, Spire Global, BlackSky and Satellogic.

The total number of SATCOM satellites will also increase significantly to nearly 800 between 2016 and 2025 (discounting SpaceX’s STEAM constellation). There are six constellations foreseen, though OneWeb is expected to comprise the bulk of these units.

Proportionally, the number of satellites to be launched and market value by application are roughly equal. In the case of EO, which is expecting significant (lower-cost) CubeSat launches, it could be considered surprising that the application will account for 58 percent of units to be launched and maintain 54 percent of the total market value. This is accounted for by larger, more complex government EO missions (costing in the tens of millions) being mixed with the expanding commercial supply.

The key driver for the development of EO smallsats is the ability to build a system that provides reduced latency, moving towards as near
real-time data collection as possible. Current EO satellite systems are able to acquire point data down to daily rates, though those capabilities do come at a price.

Further, even higher temporal system resolutions (or revisit), reducing latency further into the hourly range, are called for in some application areas, spanning defense, monitoring of infrastructure sites, and perhaps more importantly the development into new application areas built around location-based services and delivered on a web portal subscription basis.

In essence, this is the solution presented by BlackSky, Planet Labs, Urthecast et al., although they have differing application focuses depending on other mission parameters (ground, spectral resolution, etc.). Key enablers of this technology are advances in satellite miniaturization and IT.

The key element for SATCOM solutions is being able to provide global connectivity from one system, with a focus on delivering broadband services; the ability to provide connectivity to remote areas at a low-cost being the main driving factor. This is facilitated by new technologies and manufacturing techniques, to mass produce smallsats—moves to higher through-put systems (the HTS market), shift to higher frequency bands (KA) and innovative solutions in the ground segment, including the introduction of active flat antennas. However, there are restrictions that, at least in the short term, will prevent SATCOM satellites from entering the <50 kg class of systems, which is more prevalent in EO.

Opportunities In Manufacturing and Launch
Of the future $22 billion industry market value, nearly $17 billion is associated with the manufacturing of smallsats (including in-house manufacturing). The manufacturing market for smallsats is highly fragmented, with no integrators taking more than a 10 percent market share in either of the 10-year periods assessed.

Including all third-party and in-house manufacturers, around 200 organizations built a smallsat between 2006 and 2015. There is also a clear divide as to what is built in-house versus where third party manufacturers are sought: <50 kg is the realm of in-house company and academia manufacturing; 50 kg+ is largely the realm of dedicated integrating companies (both large integrators and dedicated smallsat manufacturers.)

To illustrate, for satellites <10 kg, only about 1 percent of contracted satellites are expected to be manufactured by dedicated industry, whereas for satellites between 251to 500 kg, the situation is completely reversed, with nearly all manufacturing outsourced.

Revenues generated by smallsat launches in the coming decade are estimated at a little over $5 billion, a 76 percent increase over the previous decade. The figure has grown in relation to more satellites being launched, but as with manufacturing market value, it does not reflect the four-fold increase in the number of satellites to be launched.

Competition among launch providers, including the development of dedicated solutions, and an increasing proportion in the number of
<10 kg CubeSat launched into LEO, are the primary factors of revenues not increasing at the same rate. For LEO, satellite owners have numerous, possible solutions, ranging from heavy-lift (capable of accommodating multiple satellites) to dedicated small-lift vehicles.

In reality, as heavy-lift vehicles concentrate their efforts on large government and commercial satellites, the largest of the smallsats launched are only a primary payload on medium-lift launch vehicles, while the smallest fly as co-passengers on the same launch vehicles.

The growing demand for launch to date has been captured mainly by heavy- and medium-lift vehicles through rideshare and piggyback opportunities. Launch price ranges to LEO are from $7.5k/kg to $30k/kg. The variation reflects the differences between vehicles (launch capacity, versatility etc.). For now, launch competition remains driven by price; other factors, such as launch slot guarantee, come second.

Small-lift vehicles in development will add further specialized supply. Prices from Firefly, Rocket Lab and Virgin Galactic are to range between $30k to $50k per kg, meaning they are not expected to undercut existing supply prices.

Smallsat operators have seen greater impact from launch bottlenecks than operators of heavier satellites, given that they are not the first target of existing launch providers, causing delays in finding rideshare opportunities and being dependent on the readiness of the primary payload. Heavier launch vehicles would also expect to host payloads of hundreds of kilograms rather than accommodating numerous smaller satellites.

Despite higher cost-per-kg ratios, the benefit of quicker and dedicated access to space could be attractive for smallsat operators by enabling them to provide operational services in shorter periods of time than today. With these new launch solutions, price per kilogram may not be the only appropriate metric to compare vehicles.

With more vehicles becoming available, operators could be more selective, using length of the launch campaign, launch manifest reliability and services associated with payload integration as additional parameters in their decision making, and could prefer dedicated solutions.
euroconsult-ec.com 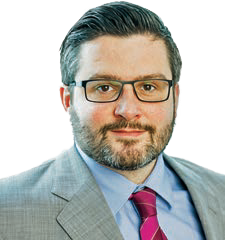 Adam Keith is the Managing Director of Euroconsult Canada. In his 15+ years working in the space sector, Adam has advised a wide range of clients including space agencies, government organizations and commercial actors along the value chain. Leading to 2015 he was the Director of Euroconsult’s Space and Earth observation practice.

When joining the firm in 2006, Adam initiated Euroconsult’s research and consulting activity in the EO sector. He managed and contributed to over 50 consulting missions, specializing in the Earth observation market and industry, satellite operations and government programs. Adam leads the firm’s EO research reports, including the flagship Earth Observation: Market Prospects, now in its 9th edition (2016). Starting in Euroconsult’s Paris office, he helped set up the firm’s North American offices in 2008.

His previous experience includes working for the European Space Agency (ESA-ESRIN). Projects focused on Earth observation market development. He also served as an ESA delegated project manager to the International Charter for Space and Major Disasters and worked in R&D for applications development focused around the Envisat mission. The early part of his career was spent working for the UK National Remote Sensing Center (now Airbus Defence and Space).

Adam holds a Masters in GIS and Remote Sensing from Cambridge University and a B.Sc. in Geology from the University of London. He is a frequently invited speaker and moderator at international events focusing on evolution, market trends and dynamics within the space and EO sector.

Euroconsult’s recently published Prospects for the Small Satellite Market presents the various factors that will drive/inhibit growth in demand for smallsats over the next 10 years.

Extensive figures and Analysis for the coming decade

All Euroconsult research has, at its core, data derived from over 30 years of tracking all levels of the satellite/space value chain.

To this, Euroconsult has added dozens of dedicated industry interviews each year, along with the continual refinement of their data models, and the collection and interpretation of company press releases and financial filings. The firm’s consultants have decades of experience interpreting and analyzing our proprietary databases in light of the broader value chain.

When research from Euroconsult is purchased, thousands of data points are received and included is the expert interpretation of what this means for specific verticals and sectors of the satellite value chain, including forecasts based on years of data and highly refined models.

For further details regarding this informative analysis, addresses the following URL: http://www.euroconsult-ec.com/shop/space-industry/82-smallsats.html