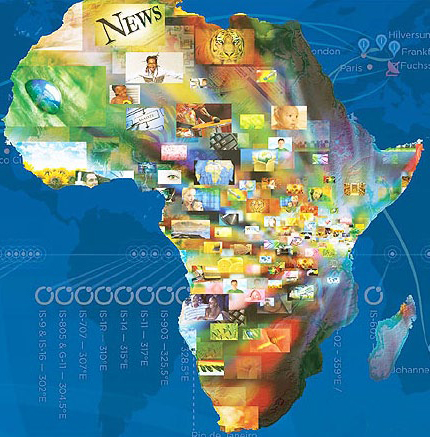 Many nations are making big strides toward the implementation of Digital Terrestrial Television (DTT), and for good reason. Digital signals provide improved reception quality and enable the delivery of larger channel lineups and enhanced multimedia applications such as video-on-demand and entertainment services. Switching from analog to DTT signals also allows for the more efficient use of spectrum, as frequencies formerly used by analog broadcasts can be repurposed for wireless networks that can contribute to national economic growth.

Satellite is a critical part of the content delivery chain for DTT, just as it always has been for analog distribution. The ways in which satellite links are utilized vary from country to country. Satellites carry DTT signals from the multiplexing facilities that bundle packages of television channels to the digital transmission towers that send the signals into homes. Satellite signals can be beamed directly to private residences, reaching customers who do not live near broadcast towers. 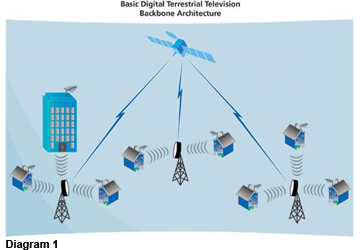 Intelsat was the first satellite operator to introduce service to Africa, and we cover the continent with more capacity than any other provider. Intelsat carries state broadcast channels for 25 African nations and offers both C- and Ku-band capacity on 23 satellites.

Flexible + Scalable Approaches
Intelsat can offer customers a number of different technical approaches to DTT distribution, based on their individual needs and circumstances.

The most basic option uses Intelsat satellite capacity to distribute DTT signals from multiplexing facilities to broadcast towers, which then send over-the-air digital signals to homes, where digital set-top boxes convert the signal for viewing. This approach results in signal delivery to all homes in the range of a broadcast tower. (See Diagram 1)

For greater penetration, the basic backbone architecture can be complimented with a direct-to-home (DTH) overlay. Homes that are not in range of a broadcast tower can be outfitted with a small satellite dish and receive the digital signal directly from the satellite. This dual-distribution approach can allow nations and license holders to reach up to 100 percent of the population without incurring the expense of constructing and powering new broadcast towers and laying new fiber connections. (See Diagram 2) 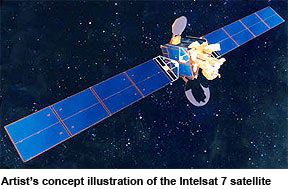 Nations and license holders can create a more attractive channel line-up by creating a bouquet of state and non-state broadcast channels for their populations by leveraging content already carried on Intelsat satellites, including many of the most popular regional and global television channels. This requires nations and license holders to negotiate directly with the content owners for carriage rights.

Intelsat’s satellite fleet and expansive IntelsatOneSM fiber network can allow state broadcast channels to be exported anywhere in the world.

Meeting Africa’s Needs
Sentech, working on behalf of the South African Department of Communications, selected Intelsat to provide satellite capacity for a DTT television service that will launch in South Africa this year. The service will use two, 36MHz, Ku-band transponders on the Intelsat 7 satellite to provide backbone connectivity and DTH television distribution across South Africa. 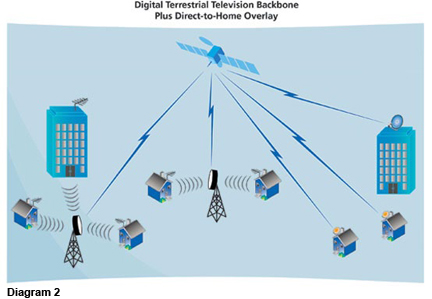 In addition, Kenya Broadcasting Corporation (KBC) signed a multi-year agreement with Intelsat to provide backbone connectivity that will carry multiplexed DTT signals from production facilities in Nairobi to terrestrial base stations around the country. The signals will then be transmitted over the terrestrial airwaves to homes around Kenya. KBC will use capacity on the Intelsat 709 satellite and the new Intelsat 22 satellite.

Technical Considerations
As the transition to DTT is started, consideration of the following nation-specific factors should be given: 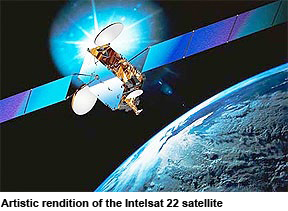 DTT technology offers many benefits over analog TV, including greater spectrum and power efficiency, improved picture and sound, and an increased channel line-up. Intelsat can share best practices on how to improve offerings for your customers with DTT.

About the author
Peter Ostapiuk is responsible for management and development of Intelsat’s media products portfolio. He manages a global team of marketing and product-management professionals that is responsible for management of media satellite neighborhoods and managed IntelsatOne video services that include fiber, teleport and MCPC products. Mr. Ostapiuk is also responsible for Intelsat’s Occasional Use business and development of Intelsat EpicNG media applications. Mr. Ostapiuk has 20 years of experience as a sales professional, including 17 years in the telecommunications and satellite industries. 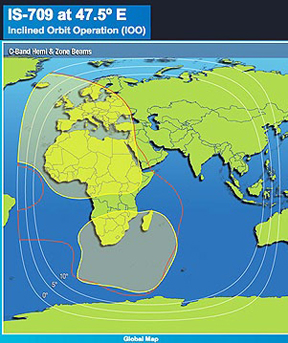