The influence of over-the-top (OTT) video has been so widespread that one wonders: What has it not changed

OTT has driven competition, consumer choice and new economic models across the media and entertainment landscape. For broadcasters, OTT has impacted operations, in particular, by supporting an alternative means of content distribution.

However, have content distribution networks (CDNs), on which OTT services depend, become the new satellite communications platforms? Industry analysts have been comparing broadcast and CDNs for several years. The variables, which include viewership, video format and costs, indicate that the two approaches bring their own efficiencies to bear in separate use cases.

The Rise of OTT
Before spelling out the differences, let’s briefly review the rise of OTT. About a decade ago, Google acquired YouTube for $1.65 billion. Soon thereafter, Netflix began giving its mail-order DVD subscribers the option of viewing video online. 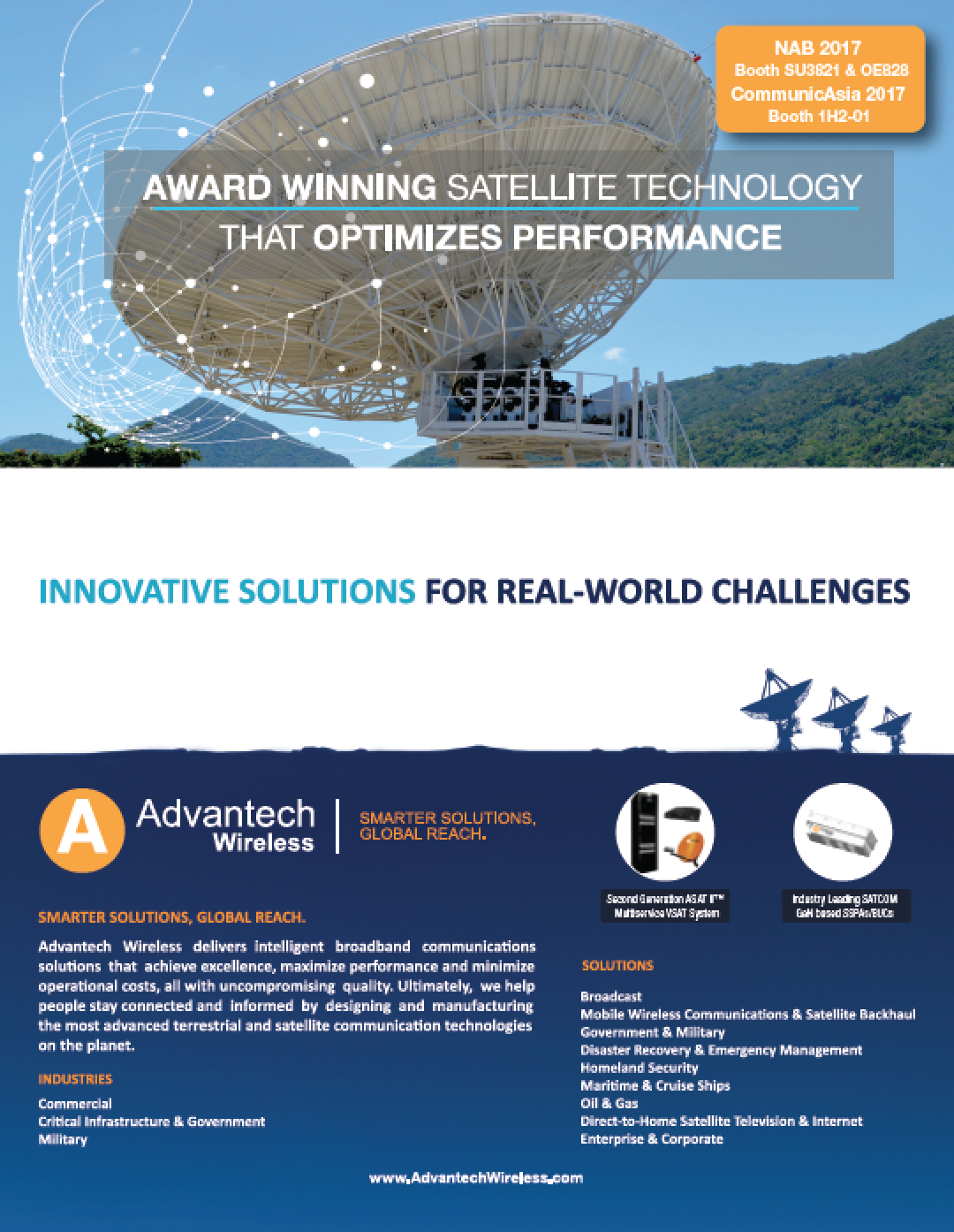 Over time, this market matured. Netflix is now approaching an astonishing 100 million global subscribers and YouTube generates billions of views and dollars. Dozens of others, from Hulu to iflix, also entered the fray.

Meanwhile, incumbent video providers began launching multi-screen and direct-to-consumer (DTC) offerings of their own. In some cases, they have even integrated OTT apps within their menus. Despite subscriber losses, many now view OTT as a core service.

From VOD to Linear
The first wave of OTT was almost entirely video-on-demand (VOD). But as operators and broadcasters launched their own services, live video services reappeared.

In some cases, these were just streamed events; in others, smaller versions of an existing lineup. Hulu, for instance, is finalizing deals for their own “skinny” live TV bundle. BSkyB’s recently announced plan for a “dish-free” payTV service also falls into that category.

Linear and on-demand, however, are two different creatures. This is where CDNs have made their mark.

When Netflix deploys new content, such as season two of Marvel’s Daredevil which the service simultaneously released to 190 countries last year, they use their own CDN to pre-populate the files on appliances at Internet interconnection locations around the world.

Only the largest Internet companies — Apple, Amazon, Facebook, Google, etc. — have built out their own infrastructure. However, whether third-party or in-house, CDNs are how OTT on-demand video is distributed — linear is a somewhat different matter.

CDN vs. Satellite
Rightly configured, CDNs can deliver live linear. Major sporting events have been streamed for many years. This is where CDNs can compete with satellites.

Broadcasters pay a fixed price to lease satellite transponders. But they pay a variable price for CDN transport, based upon traffic measured in either Mbps or gigabytes (GB) delivered. 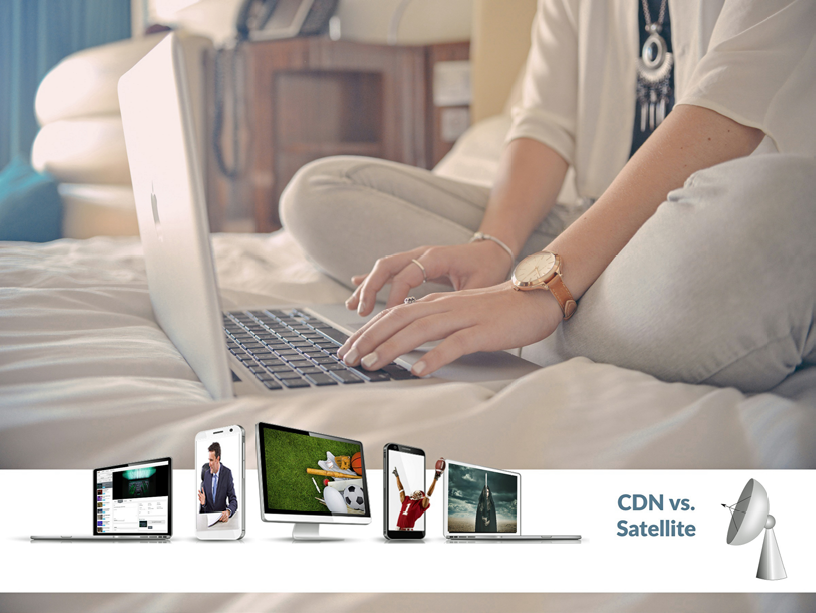 Thus, on the one hand, is a flat, horizontal cost; on the other, an upward-sloping cost curve that varies according to the number of viewers and amount of video.

Last year, Ampere Analysis reported that OTT is always less expensive than satellite for a daily viewer base below 20,000 — their report held even if average viewing was five hours and all content was ultra-high definition (UHD). On the other hand, regardless of format or the amount of video watched, satellite feeds for a single channel or service were always cheaper for a viewership of 10 million.

That’s a quite wide range — between 20,000 and 10 million viewers. How best to manage services within those parameters is the question.

Key Factors
When assessing whether to deliver video via broadcast or CDN, content providers will want to keep several variables in mind, including: 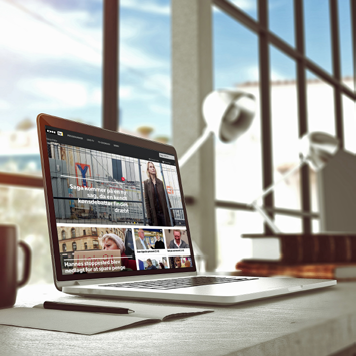 Viewership.
Well-established channels or widely viewed events may never leave the transponder. New services and niche programming are better candidates for OTT delivery. This year, the CBS All Access service will feature a Good Wife spinoff and new Star Trek series. But distribution could change. The BBC’s “Car Share” was shown online in 2013 before going to a channel; it was the broadcaster’s first such series to follow that pattern.

Video format.
Whether video is in SD, HD, and UHD or 4k format impacts the business equation. Indeed, large amounts of UHD content today is cost-prohibitive. Compression reduces the impact, but mostly influences the ongoing deployment of HD. Just to be clear, however, media processing (one of our roles at Vimond) takes place prior to file distribution.

Multicast vs. Unicast.
Technology continues to evolve, and one innovation in recent years has been to leverage the advantages of multicast (one-to-many) communication within a standard unicast (one-to-one) IP transmission. Doing so can improve the efficiency of CDNs, making them more “broadcast-like” and responsive to the variabilities of linear video.

Cost structure.
CDN costs have plummeted over the past two decades, from many hundreds of dollars to fractions of pennies. In 2016, Streaming Media reported that commodity CDN pricing as low as $0.0025 per GB delivered. Transponder costs have declined as well, with more efficiencies promised with high throughput satellites (HTS). But the primary cost factor is simply the fixed and variable distinction, as discussed above.

Reality Check
As a provider of technology for online TV brands, Vimond Media has an interest in the CDN side of this equation. However, the company’s concern is that broadcasters and other service providers select the correct solutions.

In one internal study, Vimond Media found that Dutch broadcasters are collectively spending more than 219 million euros annually in CDN expenses  for an average of three hours of OTT viewing per day. Our analysis indicates that viewership has grown to such an extent that many of these channels should “graduate” to lower-cost satellite broadcasting.

For satellite vs. CDN distribution, the bottom line is that larger channels with high viewership are less likely to be profitable on OTT; whereas niche channels are much more so.