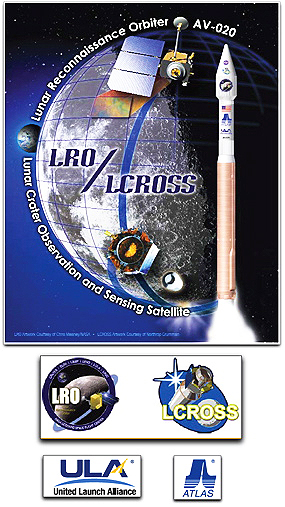 At 5:32 p.m. EDT, on June 18, 2009, an United Launch Alliance Atlas V rocket roared off the launch pad at Launch Complex 41 to begin the Lunar Reconnaissance Orbiter and Lunar Crater Observation and Sensing Satellite missions to the moon. The LRO and LCROSS spacecraft were tucked inside the payload fairing at the top of the rocket to protect them from atmospheric heating as the rocket climbed through the atmosphere toward space. The fairing separated as planned, and the LRO pushed away from LCROSS and the Centaur stage was on its way to its orbit around the moon. The LRO/LCROSS mission marks the 16th Atlas V launch and the seventh flight of an Atlas V 401 configuration.

LRO/LCROSS is a dual-spacecraft (SC) launch. LRO is a lunar orbiter that will investigate resources, landing sites, and the lunar radiation environment in preparation for future human missions to the Moon. LCROSS will search for the presence of water ice that may exist on the permanently shadowed floors of lunar polar craters. The LCROSS mission will use two Lunar Kinetic Impactors, the inert Centaur upper stage and the LCROSS SC itself, to produce debris plumes that may reveal the presence of water ice under spectroscopic analysis.

LRO Overview
LRO is the first mission in NASA’s planned return to the Moon (now somewhat delayed, thanks to government funding issues). LRO’s objectives include finding safe landing sites, locating potential resources, characterizing the lunar radiation environment, and testing new technologies. LRO’s mission to the Moon will enable scientific activities that address fundamental questions about the history of Earth, the solar system, and the universe at large. The LRO mission will allow NASA to test technologies, systems, and flight operation and exploration techniques. These new flight operation and exploration techniques are designed to reduce risk and increase the productivity of future missions to the Moon, Mars, and beyond. LRO will also help to expand Earth’s economic sphere, enabling NASA to conduct lunar activities with benefits to life on Earth. 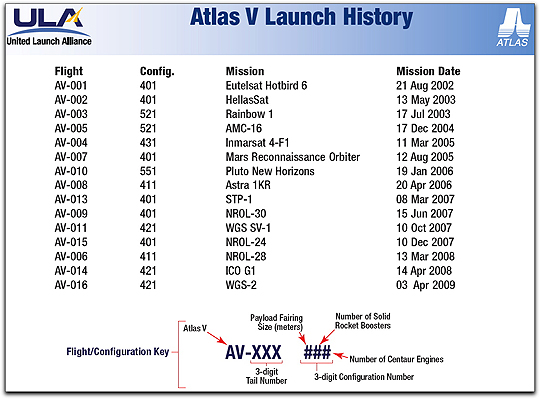 A variety of scientific instruments will be used to accomplish these objectives. The Cosmic Ray Telescope for the Effects of Radiation (CRATER) will acquire data allowing NASA to characterize the lunar radiation environment, determine the scope of potential impacts to astronauts and other forms of life, test models of the effects of radiation, and measure radiation absorption by a plastic material similar to human tissue. The results will aid in the development of protective equipment for future lunar explorers.

The Lyman-Alpha Mapping Project (LAMP) will map the entire lunar surface in the far-ultraviolet spectrum and provide images of permanently shadowed regions illuminated only by starlight. This far-ultraviolet map will aid in the search for surface ice and frost in the polar regions.

The Lunar Exploration Neutron Detector (LEND) will create high-resolution maps of hydrogen distribution and gather information about the neutron component of lunar radiation. Its data will be analyzed for evidence of water ice near the Moon’s surface.

The Lunar Orbiter Laser Altimeter (LOLA) will measure landing site slopes and lunar surface roughness and generate high-resolution, 3D maps of the Moon. The instrument also will measure and analyze the lunar topography to identify both permanently illuminated and shadowed areas.

The Lunar Reconnaissance Orbiter Camera (LROC) will take high-resolution, black-and-white, color, and ultraviolet images of the lunar surface, capturing images of the lunar poles with resolutions down to one meter. These images will provide knowledge of polar illumination conditions, identify potential resources and hazards, and enable safe landing site selection.

LCROSS is a low-cost, fast-track companion mission to the LRO mission. Its main objective is to confirm the presence or absence of water ice in a permanently shadowed crater near a lunar polar region.

After the launch, the LCROSS shepherded SC and the Atlas V’s Centaur upper stage executed a fly-by of the Moon and entered an elongated Earth orbit to position LCROSS for impact on a lunar pole. On final approach, the shepherding SC and Centaur will separate. The Centaur will act as a heavy impactor to create a debris plume that will rise above the lunar surface. Following four minutes behind, the shepherding LCROSS SC will fly through the debris plume, collecting and relaying data back to Earth before itself impacting the lunar surface and creating a second debris plume. Both debris plumes should be visible to the LRO and to Earth- and space-based telescopes with 10- to 12-inch apertures and larger.

As ejecta rises above the target crater’s rim and is exposed to sunlight, any water ice, hydrocarbons, or organic material will vaporize and break down into its basic components. These components will be monitored primarily by the visible and infrared spectrometers. The near- and mid-infrared cameras will determine the total amount and distribution of water in the debris plume. The SC’s visible-light camera will track the impact location and the behavior of the debris plume, while the visible radiometer will measure the flash created by the Centaur impact. 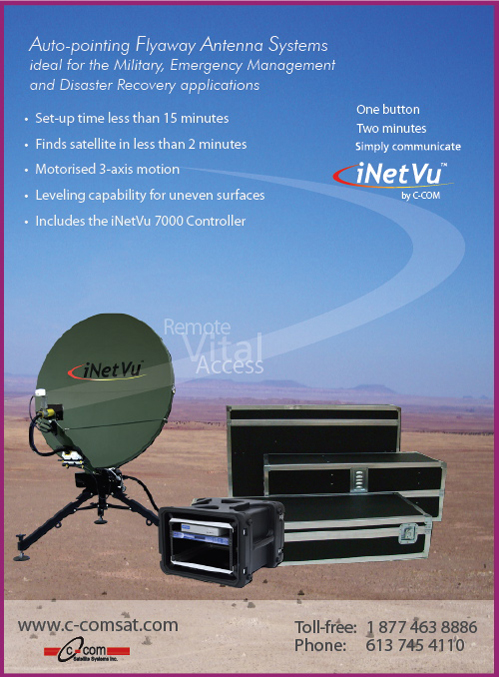 The Atlas V booster is 12.5 ft in diameter and 106.5 ft long. The booster’s tanks are structurally rigid and constructed of isogrid aluminum barrels, spun-formed aluminum domes, and intertank skirts. Atlas booster propulsion is provided by the RD-180 engine system (a single engine with two thrust chambers). The RD-180 burns RP-1 (Rocket Propellant-1 — highly purified kerosene) and liquid oxygen; and delivers 860,200 lb of thrust at sea level. The Atlas V booster is controlled by the Centaur avionic’s system which provides guidance, flight control, and vehicle sequencing functions during the booster and Centaur phases of flight. The boost phase of flight ends 6 seconds after propellant-depletion-commanded booster engine cutoff (BECO), when the separation charge attached to the forward ISA is fired and eight retrorockets push the spent Atlas booster stage away from the Centaur upper stage.

The Centaur upper stage is 10 ft in diameter and 41.5 ft long. Its propellant tanks are constructed of pressure-stabilized, corrosion-resistant stainless steel Centaur is a liquid hydrogen/liquid oxygen-(cryogenic) fueled vehicle. It uses a single RL10A-4-2 engine that produces 22,300 lb of thrust. The cryogenic tanks are insulated with a combination of helium-purged insulation blankets, radiation shields, and closed-cell polyvinyl chloride (PVC) insulation.

The Centaur forward adapter (CFA) provides the structural mountings for vehicle electronics and the structural and electronic interfaces with the SC. The LRO LCROSS mission uses the 4 m- (14 ft-) diameter large payload fairing (PLF). The PLF is a bisector (two-piece shell) fairing consisting of aluminum skin/stringer construction with vertical split-line longerons. The vehicle’s height with the PLF is approximately 189 ft.

The LRO/LCROSS payload consists of two lunar exploration satellites. The mission will fly an easterly trajectory from SLC-41. The first SC separation event released the LRO spacecraft into a lunar direct-insertion trajectory, which reached the Moon approximately four days after launch. At the Moon, LRO’s on-board propulsion will first insert LRO into an elliptical “commissioning” orbit from which it will move into its final orbit, a circular polar orbit approximately 50 km (a little over 30 miles) above the Moon’s surface.

LCROSS will remain attached to the inert Centaur and shepherd it to the Moon using its own on-orbit resources. Passing the Moon, LCROSS/Centaur’s orbit will change to an approximately 38-day geocentric elliptical polar configuration (36 to 40 days, depending on mission-specific guidance). LCROSS will guide Centaur through two to four Earth orbits (depending on the choice of a north- or south-polar impact site), direct Centaur to impact, and separate from Centaur. LCROSS and Centaur will then impact in permanently shadowed craters at approximately 2.5 km/s, with LCROSS passing though Centaur’s debris cloud before impact. 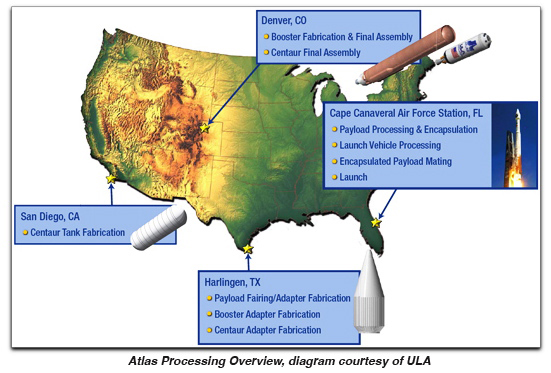 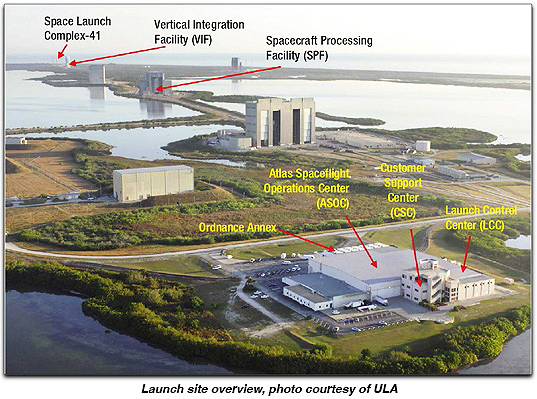 Following the transitorbit- injection manuever, remaining propellants were blowndown before handing off guidance to the LCROSS SC.

LRO Update
As of September 17th, LRO had successfully completed its testing and calibration phase and had entered its mapping orbit of the moon. The spacecraft already has made significant progress toward creating the most detailed atlas of the moon’s south pole to date.

During the next year, LRO will produce a complete map of the lunar surface in unprecedented detail, search for resources and safe landing sites for human explorers, and measure lunar temperatures and radiation levels. The south pole of the moon is of great interest to explorers because potential resources such as water ice or hydrogen may exist there. Permanently shadowed polar craters that are bitterly cold at their bottoms may hold deposits of water ice or hydrogen from comet impacts or the solar wind. The deposits may have accumulated in these “cold-trap” regions over billions of years. If enough of these resources exist to make mining practical, future long-term human missions to the moon potentially could save the considerable expense of hauling water from Earth. 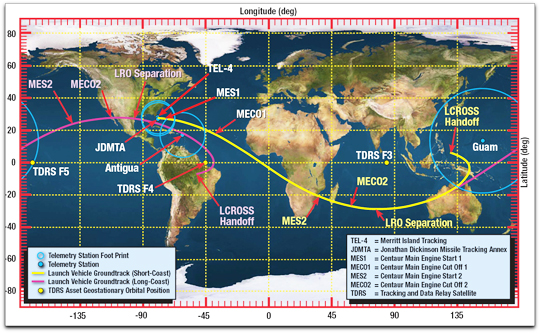 LRO NASA Diviner Experiment
First results from LRO’s Lunar Exploration Neutron Detector, or LEND, indicate that permanently shadowed and nearby regions may harbor water and hydrogen. Additional observations will be needed to confirm this. LEND relies on a decrease in neutron radiation from the lunar surface to indicate the presence of water or hydrogen. 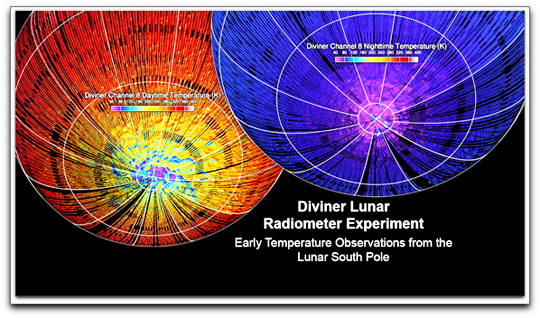 Data from LRO’s Lunar Orbiter Laser Altimeter, or LOLA, however, indicates that exploring these areas will be challenging, as the terrain is quite rough. The roughness is probably a result of the lack of atmosphere and absence of erosion from wind or water, according to David Smith, LOLA principal investigator at Goddard. LRO’s other instruments also are providing data to help map the moon’s terrain and resources. According to the first measurements from the Diviner instrument (image above), large areas in the permanently shadowed craters are about minus 400 degrees Fahrenheit (33 Kelvin), more than cold enough to store water ice or hydrogen for billions of years. The Lunar Reconnaissance Orbiter Camera is providing high resolution images of permanently shadowed regions while lighting conditions change as the moon’s south pole enters lunar summer.

LRO NASA LAMP Experiment
LRO’s Lyman Alpha Mapping Project, or LAMP, also is preparing to search for surface ice and frost in the polar regions. The instrument provides images of permanently shadowed regions illuminated only by starlight and the glow of interplanetary hydrogen emission. LAMP has provided information to confirm the instrument is working well on the lunar night and day sides. 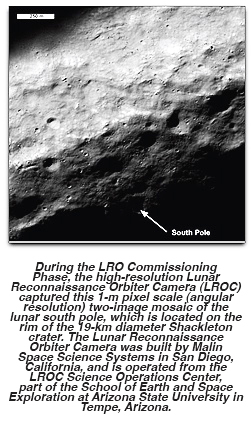 The Mini RF Technology Demonstration on LRO has confirmed communications capability and produced detailed radar images of potential targets for LRO’s companion mission, the Lunar Crater Observation and Sensing Satellite, which will impact the moon’s south pole on October 9th. Meanwhile, LRO’s Cosmic Ray Telescope for the Effects of Radiation instrument is exploring the lunar radiation environment and its potential effects on humans during record high, “worst-case” cosmic ray intensities accompanying the extreme solar minimum conditions of this solar cycle.

Goddard built and manages LRO, a NASA mission with international participation from the Institute for Space Research in Moscow. Russia provides the neutron detector aboard the spacecraft.

Editor’s Note
Our thanks to United Launch Alliance for the content of this informative article, as well as to NASA for the latest information regarding LRO/LCROSS.