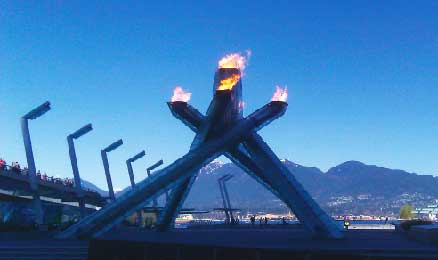 When Image Media Farm (IMF) of Vancouver, British Columbia, was bidding to provide the media coverage for the Vancouver 2010 Torch Relay, they knew it was going to be a tough job. The flame was to visit more than 1,000 communities in 106 days. Although the flame would be transported by air to the northern most latitudes, the majority of the time would be taken up by a road trip from St. John’s Newfoundland, at the Eastern tip of Canada, to Vancouver on the Western coast — that’s a route of more than 20000 Km / 12000 Miles.

As demanding as the journey itself was going to be, there would be the weather, time constraints, operational and budgetary pressures to contend with. It is perhaps not surprising there where mixed feelings when they won the contract; satisfaction for providing the winning bid, resolution for the work ahead and anxiety, perhaps even a little fear for the difficulties to come.

The challenge — to provide a mobile satellite uplink service, capable of providing SD and HD video feeds to North America, plus high speed data sent to the server and accessed by international media; not to mention moving their operational site twice a day almost everyday for three months through the Canadian winter.

This was going to be a formidable job in anyone’s book.

Introducing The SIS LIVE uPod
SIS LIVE is the largest independent uplink provider in Europe. The uPod is their fully automated, mobile satellite uplink system — it has revolutionised the SNG market in the UK and mainland Europe over the past few years.

With minimal operator input to the uPod’s control PC, the system locks on to the programmed satellite. It does this using GPS, tilt sensors, and a compass to determine where in the sky the antenna should be aimed. The uPod then executes a search pattern for the specific satellite beacon frequency and verifies the satellite with a unique modem connection. uPod is capable of finding and tracking even inclined satellites — automatically.

In normal operation, when the remote modem locks to the incoming carrier, it triggers the system to transmit its own modem signal. This establishes Internet connectivity and, if required, VOIP phones. Once the Internet connection is established, the control PC communicates with the SIS LIVE uBook scheduling system. 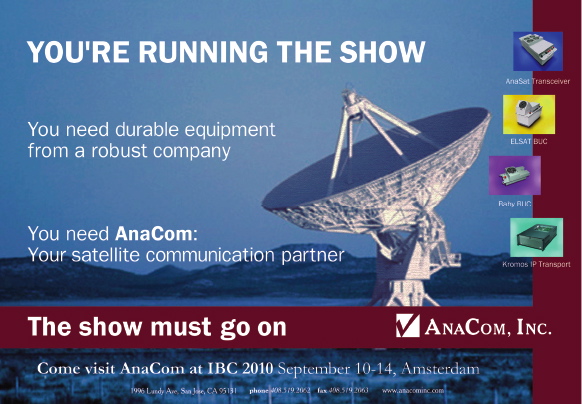 uBook enables uPod uplink systems and satellite space segment to be reserved online. Once these bookings are made and a uPod is on site and connected via the satellite modem link, all the transmission parameters are transferred from the online booking server to the uPod control PC. This then automatically programs and controls the encoders, modulators, and HPAs to initiate a fully automatic video transmission. It starts at the requested time with no need to make the traditional call to the satellite service provider, runs for the duration booked and automatically shuts down, all with no input from the operator.

This automation has streamlined traditional SNG operations and allows for completely unmanned terminals to be operated remotely.

Adapting To The Challenge
IMF contacted a number of traditional uplink service companies all of which could provide the SD & HD video links. However...

“SIS LIVE and Intelsat were the most proactive and only contenders who tested and proved a mobile satellite data connection of the speed we needed.” states Roger Williams, President of Image Media Farm.

The uPod system normally uses inbound and outbound modem carriers of 128kbps — for this application, the carrier being sent from the remote modem was configured for 6Mbps, and the return 256kbps. This allowed IMF to push large amounts of data to a third party server. The data was transmitted over the satellite link to Intelsat’s Mountainside teleport in Maryland and then on to a server based in Vancouver via fibre.

The uPod was operated in fully automatic mode in this case as the data link used the same leased satellite capacity from Intelsat as the video transmissions. Data and video links were not needed simultaneously, so this sensible use of satellite capacity helped reduce costs. 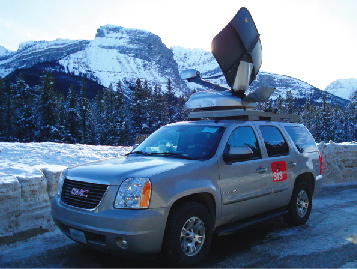 The narrow band modem carrier transmitted to the uPod by Intelsat remained “on” constantly, however, so the automated acquisition functionality of the uPod remained in tact (it uses this carrier to confirm acquisition of the correct satellite). This meant the operator simply had to turn on the satellite encoder/modulator for video transmissions or enable the 6Mbps inbound modem carrier when data transmission was required.

By adapting functionality already built into the uPod system, SIS LIVE and Intelsat were able to provide a solution to meet the operational challenge. Thankfully, SIS LIVE had commissioned two demonstration vehicles using GMC Yukon SUVs with 4-wheel drive, so the vehicle should have been capable of facing the Canadian winter too.

Life On The Road
Chuck Magee, a freelance TV technical production engineer, was hired to operate the uPod, and David Solomon, Broadcast Technical Coordinator with IMF, was in charge of using the satellite data link. Here are a few of their thoughts...

Chuck Magee
After 16,955 Kilometres and 87 days on the road, I can say that the uPod system performed brilliantly in all conditions and situations throughout the Olympic Torch Relay. We encountered weather ranging from heavy rain through steady snow to freezing cold and were not impeded by any of these conditions. We were hit with minus 40 degrees Celsius, followed by consecutive days of minus 30 degree weather, and were still able to deploy and acquire the satellite. A little care was needed to remove ice build-up along the front edge of the uPod — some “gentle physical encouragement” during initial elevation and azimuth moves was all that was needed.

During our tour, we received dozens of calls from network master control operators regarding our signal feed and 100 per cent of the time the concerns were found to be sourced at the receive end. Not once was there a signal acquisition fault generated from our truck or the satellite. These concerns were always traced back to in-house routing, communication, or interpretation of information at the receive site.

There were many days where the uPod acquired the satellite with geographic and physical challenges that on paper would not have looked probable or even possible — the majestic Rockies appeared a little too high, we were boxed in by power lines, transformers or sky scrapers and we still achieved successful signal transmission.

We gained a great sense of confidence in the uPod system and the Yukon SUV that served so well through these challenges. When the job finally came to its successful conclusion, it was with a little sadness rather than relief that I returned the keys. 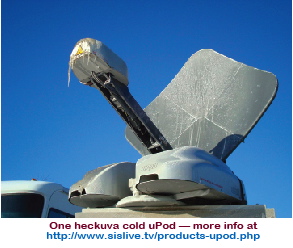 The system handled itself very well, even in the -40C weather of Timmins, Ontario, when we had a special media request and had to deploy in these conditions. The weather stayed bitterly cold, occasionally very windy, with snow storms for almost two weeks, and we never had any weather related deploy or satellite link issues due to these conditions. 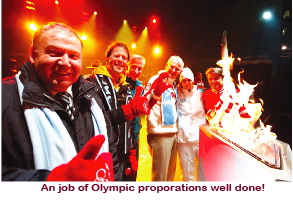 Our production demands changed by the minute and the flexibility of the uPod and Yukon saved us more than once. Being able to send data at high speed made the uploading of web and HD content possible, often there simply was no alternative IP connectivity available. The truck was fully equipped with VTRs and other production equipment that we were able to integrate into our workflow and gain efficiency because of it.

The whole service & support provided by SIS LIVE & Intelsat gave us so much confidence. A job that at times seemed almost impossible was achieved with relative ease, what could have been a nightmare turned into an adventure and it could not have been done with out the SIS LIVE uPod.

On a couple of occasions we were able to uplink a traditional broadcast within moments of getting the requests, due to a large part by our dedicated spectrum with Intelsat, but also thanks to our ability to deploy rapidly even when shore power wasn’t present.

As an example, with CTV Olympic host broadcaster Brian Williams, we were able to capture his Torch Run and within an hour CTV had his run and used the footage more than they anticipated because of the rapid turnaround. 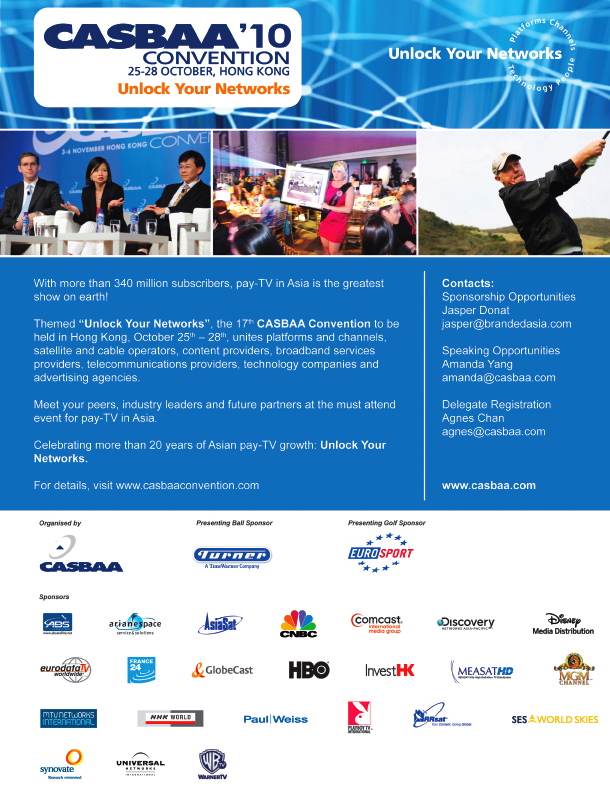