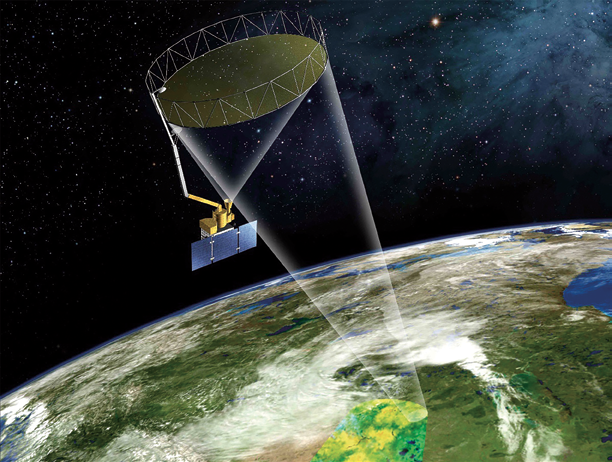 Artistic rendition of SMAP on orbit. Image is courtesy of NASA / JPL.

Scientists now have accurate, frequent mapping of soil moisture levels around the world. This information will potentially impact every person on Earth, affording better flood predictions and drought monitoring as well as improved weather and growing season forecasts. Mapping the entire land surface of Earth, every two to three days, SMAP will also assist scientists in better understanding the links between our planet’s water, energy and carbon cycles.

SMAP was launched from California’s Vandenberg Air Force Base January 31, 2015, aboard a United Launch Alliance Delta II rocket. In late April, ground controllers completed all planned on orbit deployments and spacecraft instrument checkouts. During SMAP’s critical first three months in orbit, referred to as the “commissioning” phase, the spacecraft and its two instruments, the active radar and passive radiometer, were first exposed to the space environment. The solar array and reflector boom assembly, containing SMAP’s 20-foot (6 meter) reflector antenna, were unfurled and deployed, and the antenna and instruments were spun up to their full speed of approximately 15 revolutions per minute.

The commissioning phase was also used to ensure that SMAP science data would reliably flow from the instruments through the spacecraft and ground network to science data processing facilities at JPL (Jet Propulsion Laboratory) and NASA’s Goddard Space Flight Center, which is located in Greenbelt, Maryland.

Prior to SMAP, the importance of soil moisture levels on weather and climate was not well known, gathering accurate data on a global scale was difficult to obtain. “From current climate models that produce widely differing estimates of how much water will be available regionally in the future, to inaccurate local weather forecasts, the value of high-resolution measurements of soil moisture has been recognized for decades. Existing ground-based measurements are too sparse to show detailed variations,” said Dara Entekhabi of the Massachusetts Institute of Technology in Cambridge and SMAP’s Science Team leader, who has worked on the program since inception. “We knew that better data could have a hugely positive impact, but didn’t have the technology to make it work in a cost-effective way.” 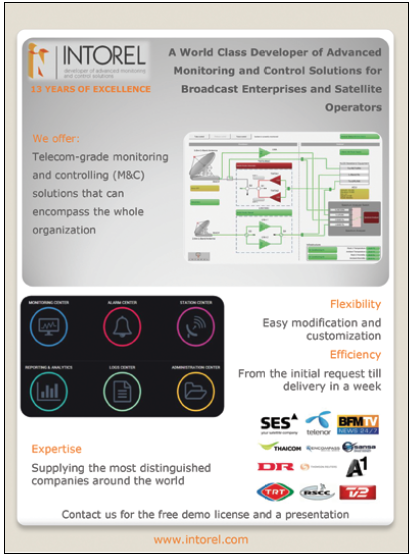 Since 2001, NASA scientists have been working on a way to get better soil moisture data from space, starting with the Hydrosphere State (Hydros) soil moisture and freeze/thaw mission project that was proposed to NASA’s Earth System Science Pathfinder Competed Missions Program in 2001. Entekhabi, who served as the mission’s principal investigator, led Hydros.

Hydros completed a series of risk reduction studies before being canceled in 2005 due to NASA budget constraints. In 2007, SMAP was named the successor mission and slated as one of four Tier 1 missions recommended by the National Research Council’s Committee on Earth Science and Applications from Space.

The SMAP mission stays true to many of Hydros’ objectives, including instrument and performance requirements. Plus, the lead and supporting NASA centers and key science personnel are the same. Following a successful mission concept review in June 2008, SMAP entered the formulation phase in September of that year. In July of 2012, the project completed the critical design review and proceeded into system integration and test in May 2013.

Now successfully in orbit, SMAP offers global mapping of soil moisture from space with about a 5.6-mile (9 kilometer) resolution. Among other data, the mission will allow scientists to better understand the processes that link Earth’s water, energy and carbon cycles. For example, soil moisture controls the evaporation and transfer of water and heat from Earth’s land surface and plants to the atmosphere. Just as perspiration helps maintain human body temperature, soil moisture and its evaporation help regulate Earth’s surface temperature.

SMAP’s unmatched data capabilities are enabled, in part, by the largest spinning mesh reflector ever deployed in space. Engineered by Astro Aerospace, a Northrop Grumman company, the 20-foot (6 meter) deployable reflector and boom spins atop the spacecraft at about 15 revolutions per minute (rpm), which allows the spacecraft to continually image a swath of Earth approximately 620 miles (1,000 kilometers) wide. The spacecraft’s orbit allows for coverage of the entire planet every three days. 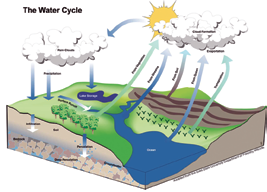 “A big challenge for this mission was getting accurate data quickly,” said Entekhabi. “Satellites that just stare at the ground under them aren’t practical for mapping the entire Earth, and so we knew that we needed to spin the reflector, and also to have a very large one to capture the entire planet’s surface.”

Adding to the challenge, the reflector could not be dynamically tested in advance. The gravity environment the reflector and boom would experience in space could not accurately be replicated on Earth, and all of the components needed to be precisely manufactured.

To build the reflector and boom for JPL, Astro Aerospace drew on the company’s long history of on orbit success for space deployables and hardware. “No one has ever tried this with such a large reflector before, so we had some significant challenges in regard to design, fabrication and assembly,” said Astro Aerospace’s Chuck Dollison, production supervisor for assembly and fabrication.

“These machines are so sensitive that breathing near the equipment during measurements skewed the results,” recalled Dollison. These techniques allowed Astro Aerospace engineers to keep the reflector and boom mass to within a 3.5-ounce window (the weight of approximately 39 pennies) and the center of mass within a half-inch (1.3 centimeter) window. The 20-foot reflector successfully deployed on February 24 and was spinning at a full 15 rpms by March 26. 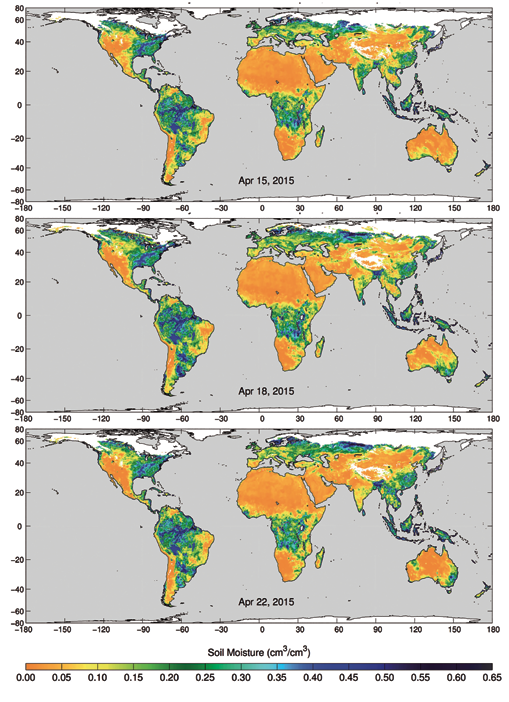 Deploying large, low-mass structures in space is never easy. This is one of the larger engineering challenges NASA missions must confront in development. Another huge challenge was in getting such a large reflector into the rocket—something akin to technical origami. The successful unfurling, deployment and spin-up culminated the more than six years of challenging reflector and boom assembly development, system engineering and an extensive test campaign.

In spite of the challenges of the mission, the SMAP reflector weighs only 56 pounds (25.4 kilograms). The extremely stiff boom, which deployed the reflector into position and reduces deflections caused by the spin rate, weighs 55 pounds (25 kilograms). With the remaining launch restraint equipment weighing approximately 15 pounds (6.8 kilograms), the entire system totals a mere 127 pounds (57.6 kilograms).

The remainder of the spacecraft is dedicated to support SMAP’s two instruments: the radar and radiometer. The radar transmits L-band microwave pulses to the ground and measures the strength of the signals that bounce back from Earth to the reflector, while the radiometer measures the L-band microwaves that are naturally emitted from Earth’s surface.

The instruments can peer into the top 2 inches (5 centimeters) of the soil, through clouds and moderate vegetation cover, day and night. The “Active Passive” in the mission name refers to the radar actively emitting microwave pulse, and the radiometer passively measuring the microwaves naturally emitted by Earth.

Together, SMAP’s two instruments produce the highest-resolution, most accurate soil moisture maps ever obtained from space. To obtain this resolution and accuracy, the data from the two instruments is combined in a way that takes advantage of the best features of each, while working around their individual limitations.

SMAP’s radar, operating at 1.2 gigahertz, transmits microwave pulses to the ground and then, using the spinning reflector, receives and measures the strength of the signals that bounce back from Earth, called backscatter. Water—including water in soil—responds differently than dry soil does to microwaves.

Water changes the strength of backscatter and microwaves’ polarization (the orientation of the electrical field of the microwaves). Therefore, backscatter from soil containing more moisture is stronger and is polarized differently than backscatter from drier soil. The extent of this difference allows scientists to distinguish the amount of moisture present in the soil. SMAP’s radar emits pulses with two different polarizations, horizontal and vertical, to make a more complete measurement of this effect.

Like the radar, SMAP’s radiometer detects differences in microwaves caused by water in soil; but it measures Earth’s natural microwave emissions at the frequency of 1.4 gigahertz. Around the globe, the most striking difference in these natural emissions is between water and land surfaces. A desert emits microwaves at about three times the rate a lake does. Because the difference is so large, even a small amount of moisture in soil causes a change that a radiometer can accurately measure. 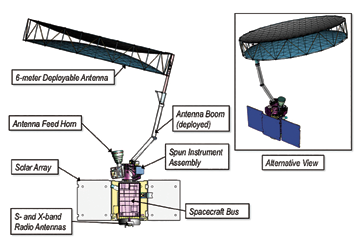 Scientists will combine measurements from SMAP’s radar and radiometer sensors through advanced data processing to achieve high data accuracy and a resolution of 5.6 miles (9 kilometers). Once fully calibrated, SMAP will offer the individual radar and radiometer data, among other data products.

Over the next year, SMAP data will be calibrated and validated through comparison against actual ground measurements of soil moisture and freeze/thaw state at sites around the world that represent a broad spectrum of soil types, topography, vegetation and ground cover. SMAP data will also be compared with data from existing aircraft-mounted instruments and other satellites that collect soil moisture data.

NASA scientists are now beginning the calibration and validation process for SMAP, using the lowest level data products (maps of backscatter and brightness temperature). Preliminary-level, or “beta,” calibrated data will be available in August at designated public-access data archives. These will include the National Snow and Ice Data Center in Boulder, Colorado, and the Alaska Satellite Facility in Fairbanks. Preliminary soil moisture and freeze/thaw products will be available in November, with validated measurements scheduled to be available for use by the general science community in the summer of 2016.

“SMAP data have implications for the entire world,” said Entekhabi. “From local weather forecasts to disaster planning to agriculture cycles, we are happy to make these data available to anyone who is interested.”

With this key milestone—the start of science operations—in their rear-view mirror, the SMAP team now looks forward to completing its calibration activities and releasing the data from this important mission, which offers broad applications for science and society.

Mark A. Foster is an INCOSE certified Expert Systems Engineering Professional (ESEP) and is currently serving as the Director of Engineering for Astro Aerospace, a Northrop Grumman company. In this role, Foster supports Astro Aerospace’s advanced development efforts and serves as Astro’s Chief Systems Engineer on the various NASA, commercial, and government programs, including the James Webb Space Telescope and the SMAP satellite.

Throughout his career, Foster has had the privilege of working on many of the major space programs in recent history, including the Antares, Delta IV and Atlas V launch vehicles, the X-37 Reusable Space Vehicle, the Space Shuttle, and the International Space Station.