Mobile Network Operators (MNOs) search for ways to increase average revenue per user (ARPU), increase the number of subscribers for their services and for ways to increase customer loyalty. To accomplish these goals, MNOs need to implement the optimal network topology, with reliable and proven high availability. The challenges, however, rest in achieving rapid and cost-effective service expansion while keeping up with the newest technological and social trends. 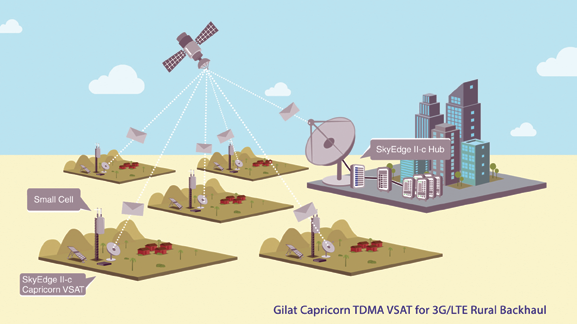 Satellite communication has become a solution of choice for an ever-growing number of backhaul deployments, particularly in rural environments where alternatives are impractical. The requirement for high-throughput broadband data traffic goes hand-in-hand with the remarkable and ongoing increase in speed and capacity. 3G/LTE networks are being built to support this need and they call for an implementation that allows data transfer at peak rates of more than 100Mbps.

For satellite communication to deliver the optimal cellular backhaul solution, it is important to understand the differences between the traffic patterns of traditional GSM networks and high-speed 3G/LTE networks. Analysis of network behavior shows that peak performance (>100Mbps) is significantly different than average traffic per user (<1Mbps). This behavior encourages sharing of the satellite bandwidth resource among multiple cells and is the only way to achieve a viable business case.

Gilat has made 3G/LTE backhaul a reality, with the introduction of the SkyEdge II-c Capricorn, the ultra-fast TDMA VSAT that supports download speeds of more than 200Mbps. This future-proof TDMA VSAT allows MNOs to differentiate themselves and to gain that all important competitive edge. Installation and deployment can now be implemented for the required bandwidth, and future expansion can be handled without additional equipment investment.

Satellite Backhaul Access Schemes
Efficient satellite backhaul implementation must account for a variety of factors. A careful analysis needs to examine network usage and to determine the access scheme that fills the need cost effectively.

Single Channel Per Carrier (SCPC)
The SCPC solution uses modems at both ends of the link, occupying the maximum-needed bandwidth permanently at each cell, regardless of the actual momentary traffic demand. In this case, a continuous modulated carrier is used, which runs at a fixed speed all the time, in both directions.

When traffic demand is stable and matches the allocated bandwidth, SCPC transmission is highly efficient. This is often the case when the quantity of active subscribers served by a specific cell is quite large. In this situation, we see, in conformance with the law of large numbers, that the deviation from average usage is small. This results in stable demand, which indeed justifies fixed, dedicated bandwidth.

Time Division Multiplexing/Time Division Multiple Access (TDM/TDMA)
Another access method is the time division multiplexing (TDM) technique, which allocates bandwidth to a specific cell in response to traffic demand. The hub transmits a common, statistically multiplexed outbound (TDM) signal to all remote cells. In the inbound direction, the bandwidth is assigned on demand, allocating timeslots to sites as needed via time division multiple access (TDMA). 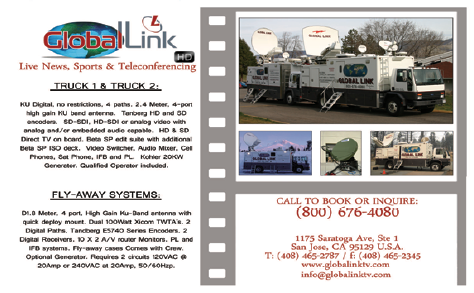 The hub continuously monitors the traffic generated by each cell, allocating bandwidth from a common pool to each VSAT according to real-time demand. Thus, each VSAT is allocated more or fewer timeslots, depending on the traffic dynamics in each cell.

Shared TDMA or Dedicated SCPC for GSM Networks?
For GSM networks, there is no absolute right or wrong answer regarding which access scheme to use: The scheme depends on what is the most economical solution to meet the individual network’s needs.

When designing a satellite backhaul, the decision centers on whether to implement a network system that uses time and frequency sharing schemes (TDMA), or one that uses dedicated point-to-point channels (SCPC). Each of these access schemes has its own benefits.

In cases where the cell activity factor is high and stable, it is better to use a dedicated SCPC link. For locations where the network traffic is continuous, with high throughput, allocating dedicated bandwidth resources with SCPC is more advantageous.

However, when the traffic pattern is variable and the difference between the peak demand in a particular cell varies greatly from the average, it is prohibitively expensive to use a dedicated link. In this situation, sharing the satellite bandwidth resource among multiple cells is much more economical. Networks that operate in TDMA mode take advantage of the dynamic nature of the traffic and statistically multiplex between cell sites. These networks allow bandwidth resource sharing, which can offer service providers reduced operating expenditures (OPEX) advantages.

What Has Changed?
The Greek philosopher, Heraclitus of Ephesus, is quoted to have said in 500 BC that change is the only constant. This may certainly have been true then; however, today, the pace of change is quite striking, observed not only in technology, but in all walks of life.

In telecommunications, several drivers of change have converged and are bringing high-speed cellular connectivity to the most remote locations. Satellite backhauling for quickly extending 3G/LTE networks to rural areas can now be achieved from a technological and business perspective.

3G/LTE networks adoption—According to GSMA Intelligence: “In most cases, the migration to 4G-LTE is happening considerably faster than the earlier migration from 2G to 3G.” They forecast that, by 2017, 12.5 percent of the approximately eight billion total mobile connections will be 4G-LTE.

Smartphone—Smartphone adoption is considered by many research firms to be the fastest growing of any consumer technology in history. The Flurry Analytics firm claims that smartphone adoption is two times faster than the Internet boom experienced in the 1990s, and three times faster than the recent social networking phenomena. Therefore, smartphones are not limited to early adopters and are becoming ubiquitous worldwide. Smartphone costs have also sufficiently decreased, with an extensive second-hand market, making these devices prevalent in remote locations. LTE support in smartphones is no longer a question, but a requirement.

Data usage—Not only the quantity of smartphones, but the types of applications and, thus, traffic types have changed from primarily voice to data. According to industry research, video is by far the fastest growing application. Mobile data traffic growth worldwide is projected to be outstanding; according to Cisco’s Mobile Data Traffic Forecast the CAGR will be 61 percent from 2013-2018.

Cell technology evolution—The evolution of the base station from the traditional large expensive macro cells to low-cost outdoor small cells is now providing a sustainable business case. Small cells are making rural communication economically possible. Solutions such as CellEdge, recently introduced by Gilat, have been optimized for space segment efficiency as well as an enhanced user experience. 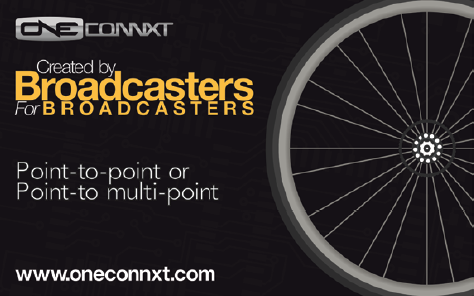 High throughput satellites (HTS)—HTS are influencing the economics of broadband communication. Most of these satellites implement spot-beam technology to reuse the frequency band across the desired coverage area. This solution enables much higher throughput than traditional, wide-beam satellites. The increased broadband capacity reduces the bandwidth cost by orders of magnitude—translating directly to lower OPEX, enabling the penetration of high speed data into rural areas.

Why Is An Ultra-fast TDMA VSAT The Only Viable Solution For 3G/LTE Backhauling?
SCPC is no longer an option—The technology and social changes described above are causing a significant shift in Internet traffic patterns. Data traffic behavior on fast transmission channels is very different than voice.  A voice call lasts on average three minutes; Internet surfing, emails, data transfers and many other applications travel on high-speed broadband in less than a few milliseconds at a time. This means that there are long periods of idle time for each smartphone between these very short bursts, resulting in a highly bursty traffic pattern.

While more than 100Mbps is a must some of the time, on average the typical traffic is less than 1Mbps. Peak performance is significantly higher than the average usage. This high peak to average ratio—1:100 —is best served by sharing the satellite bandwidth resource among many cells with a TDMA access scheme. A single channel per carrier—SCPC—is unfeasible in this scenario for high-speed 3G/LTE networks. A network of 1,000 cells of dedicated SCPC links would require a space segment of 100,000Mbps, instead of only 1,000Mbps when using TDMA for bandwidth sharing.

Ultra-fast TDMA VSAT is a must—The expected performance in LTE networks is at least three to four times faster than HSPA+ speeds. Download data speeds of 100Mbps and even higher must be supported by new, advanced technology.

A satellite backhaul requires an ultra-fast TDMA modem to ensure LTE’s high-performance speeds, which could be delayed in TDMA networks by inherent satellite delays and the implementation of the TCP protocol in the phone. Therefore, TCP acceleration is a critical requirement to ensure LTE network performance.

The required high speed can be uniquely achieved with SkyEdge II-c Capricorn; Gilat’s future-proof TDMA VSAT with speeds exceeding 200Mbps. Capricorn is based on multiple-core ARM technology, and features built-in mechanisms to support high-speed acceleration and encryption. The VSAT has been designed with a powerful AES-256 encryption engine that can work in speeds over 100Mbps and the unit is equipped with embedded TCP acceleration. Capricorn has been successfully tested in such environments and is, indeed, up for the challenge.

The Feasibility Of 3G/LTE Satellite Backhauling
The need for faster Internet access via mobile devices is driving the integration of 3G/LTE into existing networks. Technical, social and business changes are accelerating the adoption of 3G/LTE networks to the most remote locations.

Satellite backhauling has always been the only feasible way to reach such areas and must now stand up to the high-speed network challenge. MNOs must be able to provide high performance as well as ensure an enhanced user experience, essential security, quick deployment—all within the envelope of a justifiable business case.

To answer these needs and make 3G/LTE backhaul a reality, Gilat introduced, and is the first to the market with, SkyEdge II-c Capricorn, the ultra-fast TDMA VSAT.

About the author
Doreet Oren (doreeto@gilat.com) is Director of Product Marketing for Gilat Satellite Networks. In this role, Oren works closely with the Commercial and Defense divisions to define product positioning, messaging and go-to-market strategies and is responsible for market research and analyst relations. Oren has more than 20 years of industry experience, and has held management positions in R&D, product management and product marketing for international high-tech companies. In this capacity, she contributed to next-generation product definition and was responsible for delivering the company’s vision to the media and analyst community. Oren has published thought leadership articles in renowned international journals, and has spoken at numerous industry conferences worldwide.